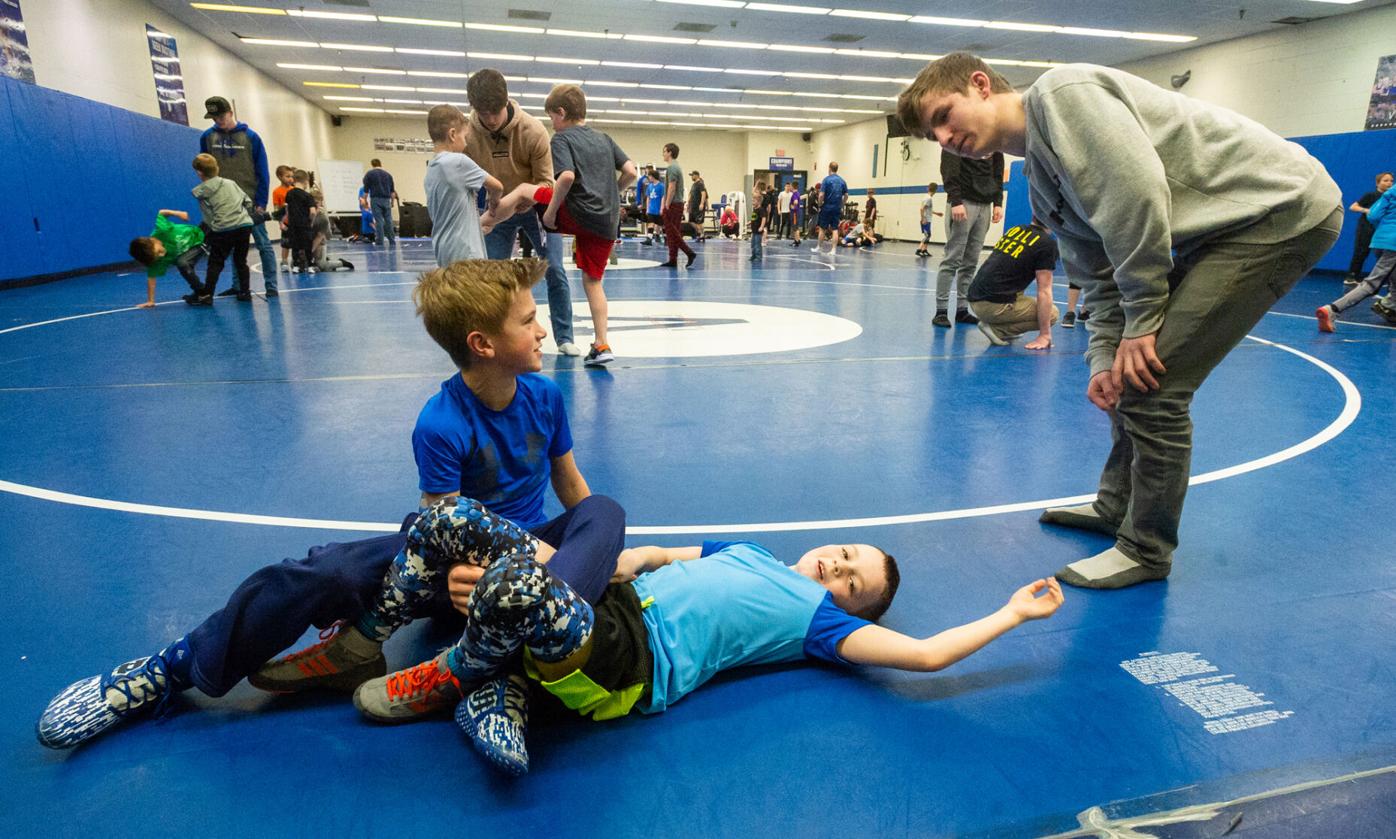 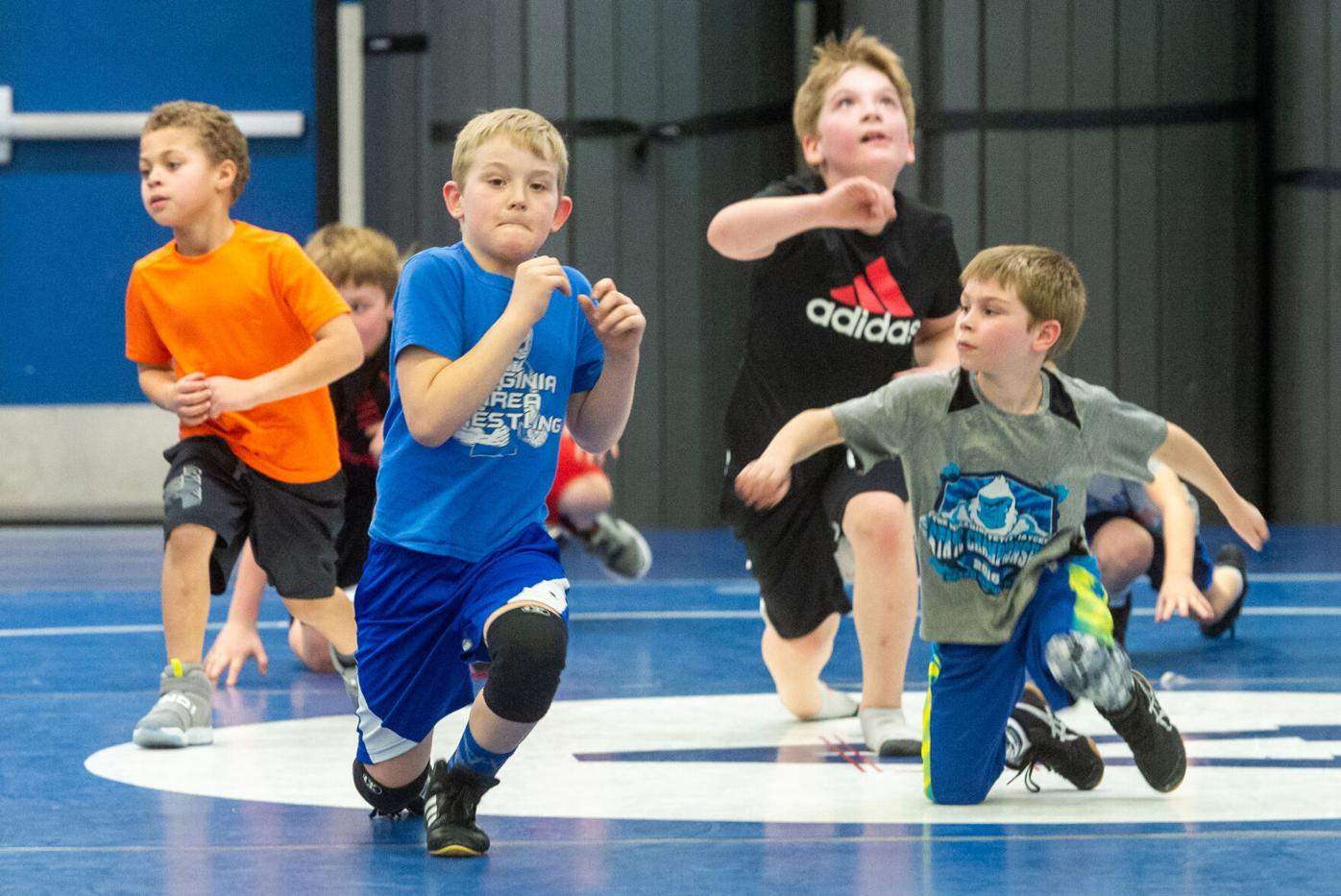 Wrestlers work through a series of fitness drills as part of practice Tuesday.

Wrestlers work through a series of fitness drills as part of practice Tuesday.

The Blue Devils have had about 130 kids in elementary wrestling — and many of them are second- and even third-generation grapplers.

“This is really a big core that has past history,’’ head coach Dennis Benz. In fact, it’s about the biggest number of wrestlers at one time that belong to wrestling families, he added.

Benz has three generations in his own family, as does Roger Nelson, who founded the program 50 years ago.

“This is an extremely large group of kids (elementary and junior high) that are coming through that you don’t see that often. ... It’s kind of neat.’’

How does the wrestling lineage help out on the mat?

“I can tell even when they’re second generation. It’s a big, big help,’’ said Benz, whose son Garrett was a wrestler and grandsons Gage and Grant are now in the sport. “They’ve already got the mental part of things figured out.’’

Ty Wallner, a 2011 Virginia graduate and wrestler, agreed that it “absolutely’’ helps the so-called ‘‘mat rats’’ that have been in the wrestling room for years with their dad, uncle or brother. “There’s quite a few families that have really stuck with the sport.’’

As far as stressing the importance of the sport’s mental component, “you can preach to the moon and tell them there is more to it than getting in shape and going out there and wrestling. There’s a mental aspect to this whole thing. That gets overlooked a little bit in a tough sport with big, tough athletes,’’ Benz said.

The head coach said that is something you can’t really teach. “But yet if you hear it enough from the people that have been there already — especially if it’s your dad or grandfather or whatever — it makes a big difference. You can definitely see the difference. I can see where it helps a lot.’’

Right now there are nearly 25 younger Virginia wrestlers that are either second- or third-generation competitors.

Joe Madden, assistant coach of the younger group, said the second- and third-generation wrestlers naturally get extra mat time, which is a great help. His son Bryce, 9, is in that category because he’s been competing in the wrestling room since he was 4.

Wallner now coaches the younger Blue Devils and sees the advantage second- and third-generation kids have. With a trend of dads that have wrestled, he added, “it definitely seems to help when it comes to a lot of the basics.’’

Bryce has taken an interest in the sport, which his father also competed in. That means the father-son duo will often sit and watch a college dual meet or the NCAA Tournament.

“It’s nice because he has the interest and I can sit there and explain it to him. The more you’re around it, the more knowledge you have,’’ said Joe Madden.

The older Madden didn’t start wrestling until third grade and thought his dad was talking about joining professional wrestling when he brought the sign-up form home. “I went and had some success so the interest stayed there,’’ just like his son.

On the mat, the wrestlers can draw from a lot of experienced coaches and relatives. That ranges from participation in the sport to wrestling at the State Tournament or coaching.

Overall, the kids have bought into Benz’s philosophy that wrestling is unique compared to other sports.

Wrestling has an individual part of things, and the grapplers can excel as individuals based on how they take care of themselves.

Plus it’s all on the athlete once out on the mat.

“You yourself have to go out there on the mat and do that job. There’s nobody else,’’ Benz said.

“You have to go out there every day. If you can’t do your job then you’re letting the team down.’’

Experienced relatives can also help the elementary kids realize wrestling is both an individual sport and a team sport, Wallner said. “The parents can explain that to them.’’

Elementary dual meets have helped the kids understand the team aspect, as well, when “your team is on the bench sitting there cheering for you.’’

Those first- or second-generation veteran wrestlers can also help the kids understand the sport and its scoring because, “you don’t have a pickup game of wrestling in the backyard,” Wallner said.

“They’re going to be stars. You see good things already for them.’’

The group of young wrestlers is a lot farther along than they were last year, the coach said of just one added year of practice.

“It’s amazing how much that helps.’’