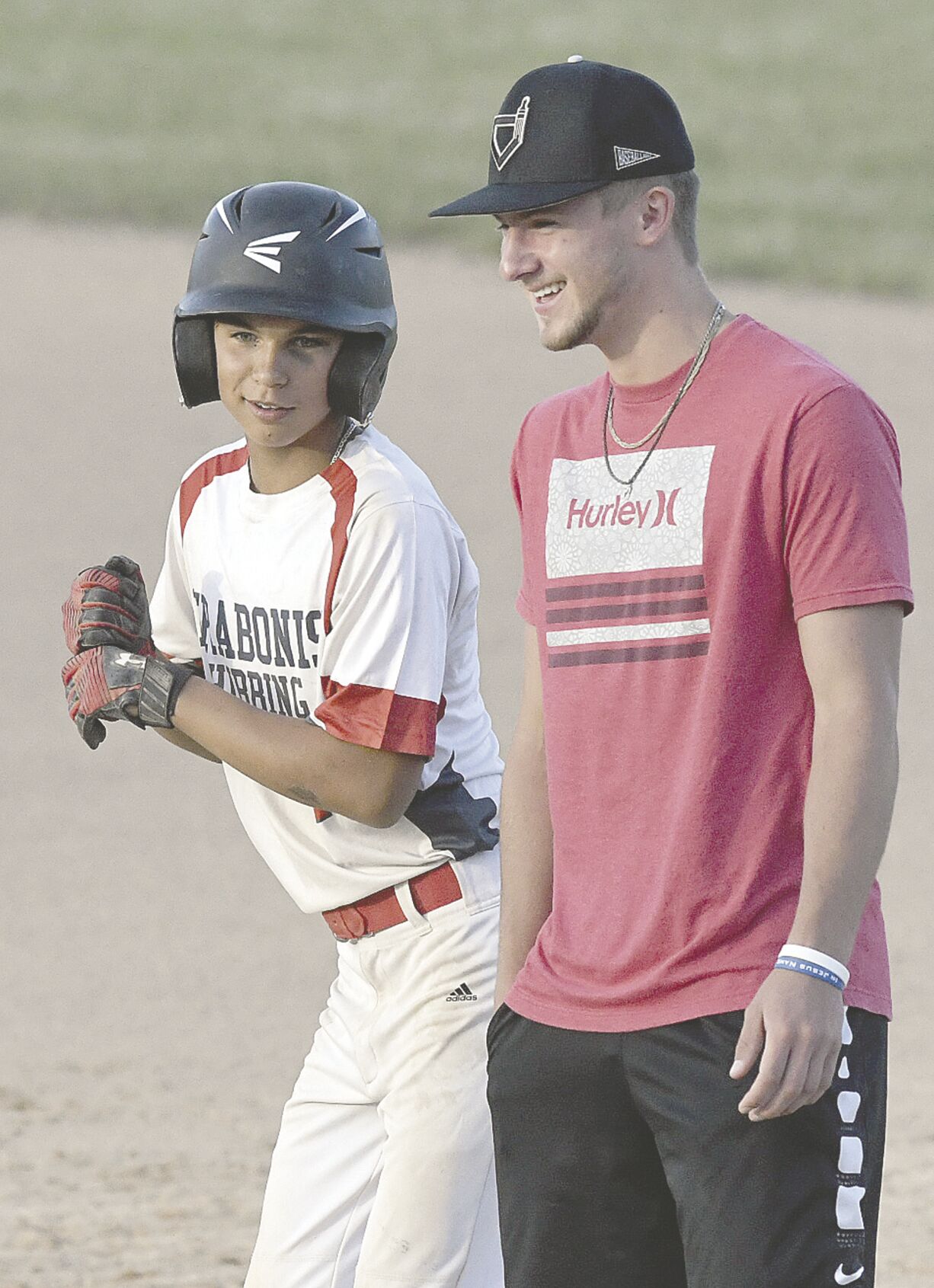 Fraboni’s Edric Cardona (left) jokes with firstbase coach Cole Mammenga after he was hit-by-a-pitch during the sixth inning of Hibbing’s game with Grand Rapids Monday at Al Nyberg Field. 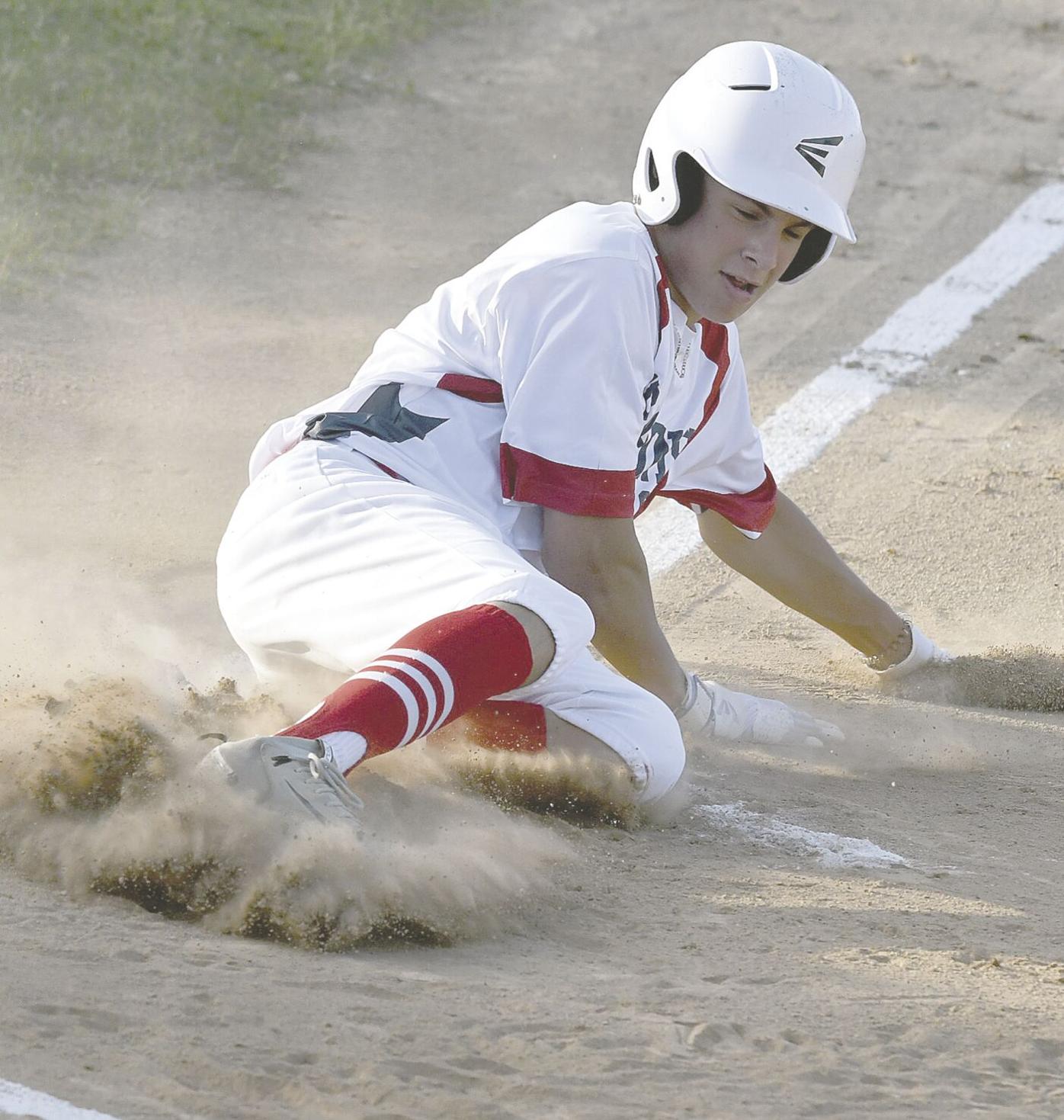 Fraboni’s Edric Cardona (left) jokes with firstbase coach Cole Mammenga after he was hit-by-a-pitch during the sixth inning of Hibbing’s game with Grand Rapids Monday at Al Nyberg Field.

HIBBING — Giving teams extra outs during an inning is usually a disaster.

The Fraboni’s Hibbing Junior League baseball team found that out the hard way when it gave Grand Rapids four extra outs in the third inning and paid for it by giving up five runs.

Somehow, some way, Fraboni’s was able to recover from that inning, scoring four runs in the bottom of the fifth inning en route to a 9-8 victory over Grand Rapids Monday at Al Nyberg Field.

Fraboni’s overcame a two-run deficit with that rally to puck a big Junior League victory over their neighbors from the west.

“That's a nice win for us,” Fraboni’s coach John Mammenga said. “We had a nice-early lead, and we had that one inning that got away from us. There again, the boys battled, kept their heads up, we got ourselves back in there and held on.”

Things looked good for Hibbing after starting pitcher Beau Frider got out of a second-and-third-with-no-out jam in the first.

Fraboni’s came back with a rally of its own as Friday and Dane Mammenga hit back-to-back singles and Thomas Hagen walked.

Grand Rapids pitcher Gavin Moen was about to work out of that jam, but three runs scored on wild pitches.

With two out, Nathan Maki walked, took second on a wild pitch, then he raced to third on a throwing error. Maki would score on a single by Tyler Fosso and it was 4-0.

“That was huge,” Mammenga said. “Anytime you can get up on Rapids early, you don’t take your foot off the gas, but it always feels good to jump on them.”

Friday had a one-two-three second inning, then Hibbing came back with a single tally in the second as Carson Brown walked, and Edric Cardona was hit-by-a-pitch. Frider would walk to load the bases. With two out, Hagen hit an RBI single, but Hibbing had a runner thrown out at the plate to end the inning.

That’s when Fraboni’s defense let it down.

Jake Garski reached on an error, then Jackson Hill struck out, but he reached first on a overthrow.

Xander Sherman hit an RBI groundout to knock in the final run of the inning.

When everything was said and done, the game was tied 5-5.

“That was disappointing,” Mammenga said. “We should have had the first two outs of the inning. They were routine plays. We had that dropped ball at first. We had a dropped third strike. Those are the two outs you have to have.

“That happened at the bottom of the order, and that opened the can. It’s about concentrating all of the time, and keeping your head in the game on every-single pitch. We got lackadaisical, and that’s what happens.”

Grand Rapids took the lead in the fifth when Svatos reached on an error with one out, and he stole second. Kinkel walked, then consecutive passed balls let Svatos score. Another dropped third stroke allowed Broberg to reach, then Sherman hit an RBI single to make it 7-5.

Fortunately for Hibbing, it was able to respond in the bottom of the fifth to retake the lead.

Frider and Mammenga both singled, then Hagen walked to load the bases. Benny Galli walked to force home a run. That was followed by a two-run single off the bat of Maki, then Fosso hit a sacrifice fly to make it 9-7 Fraboni’s.

“That feels good because we’ve been down a lot these last few games,” Mammenga said. “Every time we’ve been down, these boys keep their heads up. They put the ball in play, and we keep scoring.

“In our last couple of games, we’ve fallen a little short. Tonight, we got on top, and we were able to close it out.”

Grand Rapids made it 9-8 in the sixth as Charles Johnson walked, stole second and took third on a sacrifice bunt. He would score on a wild pitch.

“We got Beau back, but his arm has been a little bit sore,” Mammenga said. “I’ve been watching his pitch count close, and I had made up my mind that when he finished out that inning, we were going to go to Carson.

“That was Carson’s first mound appearance this year. We’re trying to get arms ready for that tournament. I was happy with the way Carson threw.”