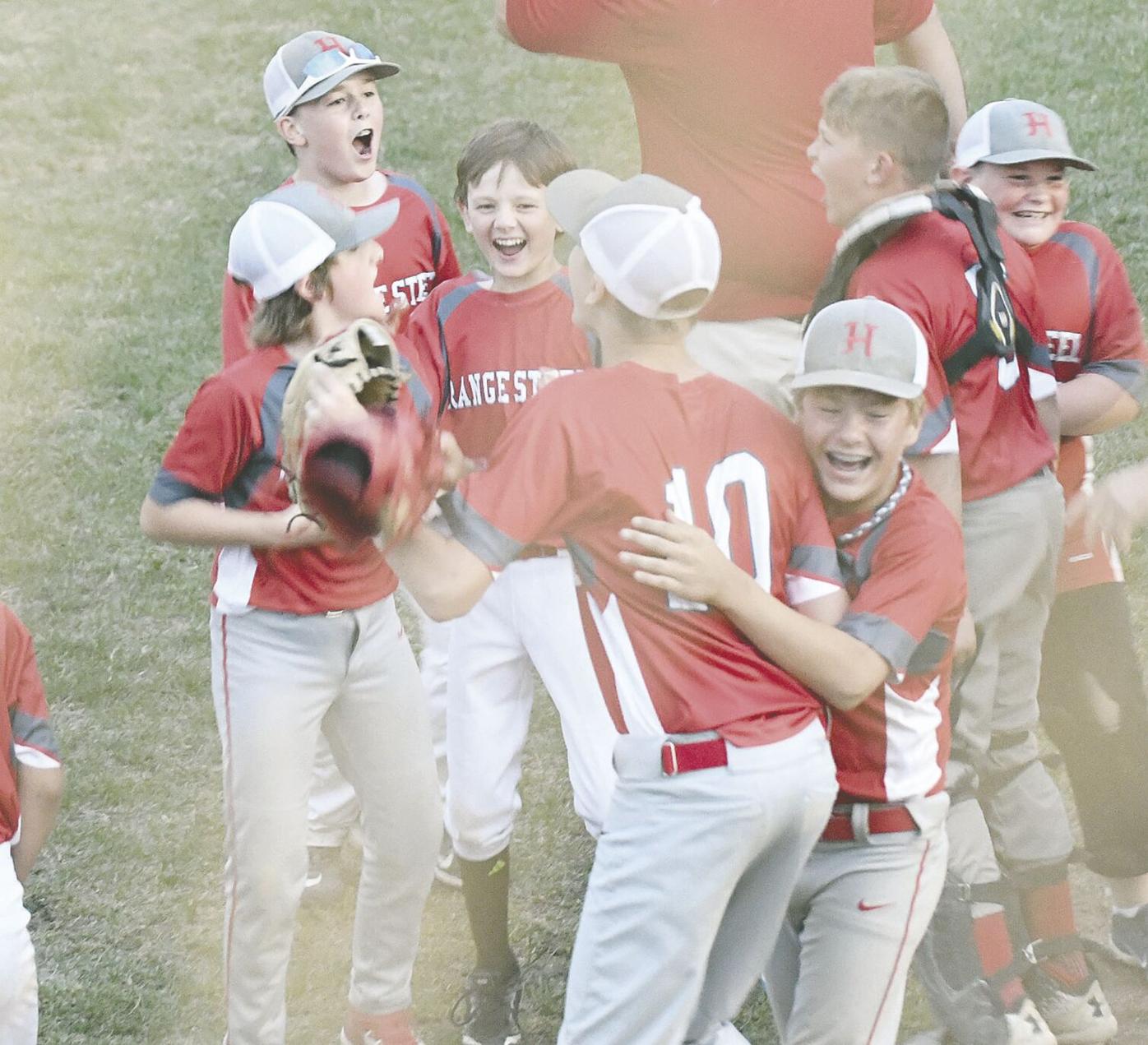 Several members of the Range Steel Little League team celebrate after the Hibbing Little League Championship after an eight-inning duel with Ranger Chevrolet. 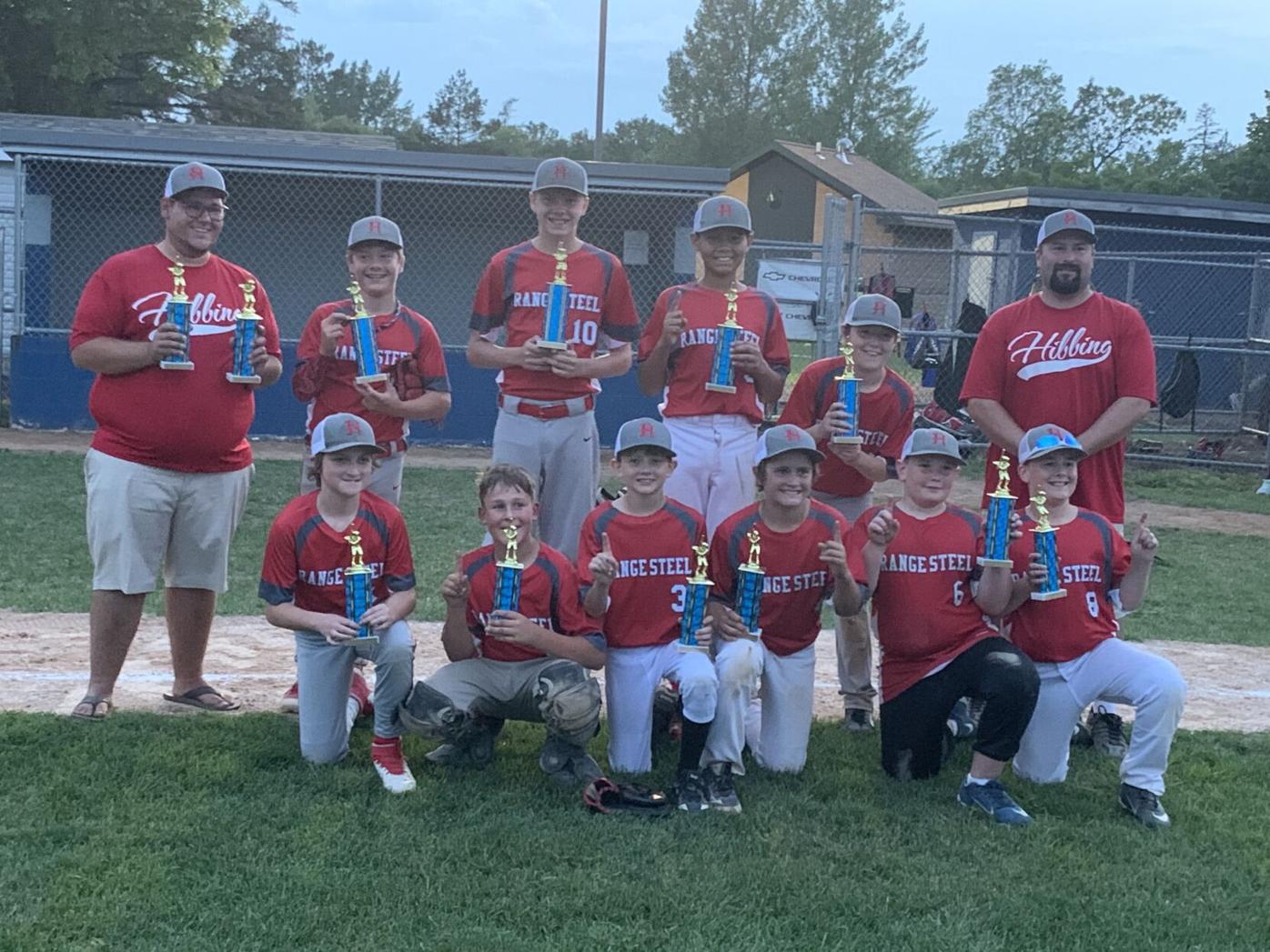 Several members of the Range Steel Little League team celebrate after the Hibbing Little League Championship after an eight-inning duel with Ranger Chevrolet.

HIBBING — It was quite the game to end the Hibbing Little League playoffs.

Both Ranger Chevrolet and Range Steel went toe-to-toe for eight innings to see which team might break first.

As it turned out, Range Steel persevered and came away with a 12-11 victory in game two of the double-elimination tournament held Thursday at Hanson-Lee Field.

Ranger Chevrolet won Wednesday’s game 5-3 to force the second game, and Range Steel had to come-from-behind three times in the game, and won it when Mikko Boben singled home the go-ahead run in the top of the eighth inning.

“That was exciting,” Range Steel coach Tony Potter said. “It was a hard-fought game. The kids persevered. It couldn’t have been a better finish. It was a heck of a championship game, two games actually. They were close.

“We displayed the best of Hibbing Little League baseball. I couldn’t be more proud.”

“They were hitting the ball,” Schweiberger said. “It was a good game, a back-and-forth, see-saw battle. We’d score some, then they came up tied it up. It was a rollercoaster ride for everybody in our dugout, the players, the coaches, the fans.

“Whenever you thought it was your turn, you got the opportunity, something else would happen. It was a back-and-forth battle, a great game for a championship game. You can’t write a storybook ending to baseball.”

Evan Bolden came up big for Range Steel. He had three hits and five RBI, plus, he pitched the final four innings, allowing four hits and striking out nine to get the win. He worked his way out of several jams during those four innings of work.

“Evan did a great job,” Potter said. “He hasn’t pitched a lot this year. He had some arm injuries earlier in the year, with his elbow. This is the most he’s pitched all year. He couldn’t have done a better job.

“He shut them down. He didn’t give up a single run in four innings. You can’t ask for much better than that out of a Little Leaguer.”

Having to work out of so many jams was tough on the nerves.

“My nerves are shot,” Potter said. “It’s funny to say for a Little League game, but we’ve played this team a lot of times the last three years. They’re so good. They’re a veteran team, but our kids kept their cool.

“Our defense cleaned up from early in the game and made the plays when it counted. We threw the strikes that counted, and got the outs.”

Ranger Chevrolet would leave 15 runners on base, which came back to haunt them.

“We left numerous runners on base in scoring position,” Ranger Chevrolet coach John Schweiberger said. “In extra innings, we had runners on second and third and bases loaded, and we couldn’t get them in to score.”

Ranger Chevrolet got out of a jam in the first inning, then used three Range Steel errors to plate two runs in the bottom of the first.

Kaiden Sweeney reached on an error. With one out, Gavin Lamphere reached on the second error of the inning.

They both moved up a base on a passed ball. Sweeney scored when Gavin Schweiberger grounded out. Mason McDonald’s ground ball was misplayed for an error, allowing Lamphere to score to make it 2-0.

Ranger Chevrolet added one more run in the second when Lucas Davidson walked, followed by a double off the bat of Kellen Elsner. With one out, Reece Ringhofer singled home Davidson.

Ranger Chevrolet would leave two base runners on base as Range Steel pitcher Jackson Strukel worked out of the inning with two-straight ground outs.

Range Steel needed to respond and it did when James Jivery walked, then an error on a sacrifice bunt by Connor Sullivan put runners on second and third.

Strukel helped his own cause with a walk to load the bases, then with one out, Evan Bolden tripled to tie the game 3-3.

Aiden Davey followed with another triple to give Range Steel it’s first lead of the game.

Mikko Boben hit an RBI groundout to make it 5-3.

Ranger Chevrolet didn’t let that inning affect it too much as Lamphere reached on an error to start the third. Schweiberger singled, then they both moved up a base on a passed ball.

McDonald would reach on an error to plate Lamphere. Schweiberger scored on a wild pitch to tie it 5-5.

Aaden Folstad would walk, and with runners on second and third, McDonald scored on a wild pitch to give Ranger Chevrolet a 6-5 lead.

Elsner delivered his second double of the game, scoring Folstad to make it 7-5.

Ranger Chevrolet added to its lead in the fourth as Sweeney reached on an error and stole second. With one out, Lamphere doubled down the leftfield line and it was 8-5.

Schweiberger would single Lamphere home to give Ranger Chevrolet a four-run lead.

Folstad singled, and Schweiberger scored when the ball was misplayed for an error to make it 10-5.

Now it was Range Steel’s time to respond, and it did when Strukel doubled to start the fifth. With one out, Bolden delivered another run-scoring base hit, to give him four RBI on the game.

Aiden Davey walked, then Mikko Boben lined an RBI single to make it 10-7. Nick Gustafson kept the inning going with an RBI single as Range Steel pulled to within two, 10-8.

Coleton Hill hit a fielder’s choice ground ball, and when the ball was thrown away for an error, Boben scored to make it 10-9.

Ranger Chevrolet was equal to the task again as Elsner singled, took second on a wild pitch, then stole third. Tommy Sampson hit an infield single to drive home Elsner to make it 11-9.

Sweeney was hit by a pitch to put runners on first and third with one out. Vesel walked to load the bases, but Bolden worked out of the bases-loaded jam by getting a flyout and strikeout to keep the game 11-9.

Leaving the bases loaded came back to haunt Ranger Chevrolet as Sullivan walked and Strukel was hit by a pitch to start the sixth.

Folstad, who came on in relief, got a pop out, but Bolden delivered once again, with an RBI double to make it 11-10.

With the bases loaded following an intentional walk to Davey, Boben hit an infield single to tie it 11-11, and more importantly, loaded the bases with one out.

Folstad, who was just as impressive as Bolden, kept his composure and got a strikeout and ground out to keep the game tied.

Ranger Chevrolet loaded the bases with two out in the sixth, but Bolden got a pop out to send the game into extra innings.

Folstad struck out the side in the seventh, giving his team a chance to win during the bottom of the inning.

Ranger Chevrolet put runners on second and third with two out, but Bolden recorded a strikeout to get out of the jam.

In the eighth, Easton Fisher reached on a fielder’s choice ground ball, then

Bolden walked. With two out, Boben hit an RBI single down the rightfield line, scoring Fisher with the go-ahead run.

Ranger Chevrolet got a single from Folstad to start the bottom of the eighth. After a strikeout, Elsner was intentionally walked. With two out, Ringhofer was hit by a pitch to load the bases.

Bolden got the next hitter to fly out to end the game.

“You take away those errors in the first-few innings, and this game looks different,” Potter said. “Those errors bit us, but we came back. They didn’t get down on themselves. They kept fighting.

“The end result was a win and a championship.”

Folstad finished up 3 2/3 innings of six-hit ball. He struck out five and walked four.

HIBBING — Ranger Chevrolet forced a second game with that three-run victory in game one of the finals.

Ranger Chevrolet wasn’t used to being in this position. They were undefeated during the regular season, but they lost their first game at the beginning of the playoffs.

“It was surreal for the team, playing all year and being undefeated, and not having to deal with a loss,” Schweiberger said. “In this game, they stuck with it and did what they had to do to get the win.”

Range Steel took a 1-0 lead in the first inning when Landon Krampotich doubled with two out. He scored on two wild pitches.

“They put the first run on us, and we had to come back,” Schweiberger said. “From then on, we won inning after inning. Our plan was to win each inning we were headed into.”

Ranger Chevrolet tied it in the bottom of the second when Mason McDonald reached on a two-base error. Two wild pitches later it was 1-1.

Range Steel got the game tied 2-2 with a run in the fourth. Easton Fisher reached on a fielder’s choice. He reached second on a wild pitch. He scored when Evan Bolden reached on an error.

Ranger Chevrolet would take the lead for good in the bottom of the fourth. Schweiberger doubled to start the inning, then after a flyout, Aaden Folstad doubled him home.

With two out, Elsner tripled and it was 4-2.

From there, Ranger Chevrolet pitcher Sweeney got out of a second-and-third jam in the fifth inning, and he only faced three batters in the sixth to force that second title game.

“Kaiden did a heck of a job on the mound,” Schweiberger said. “He kept those hitters guessing. They didn’t know what was coming at them. They had guys in scoring positions, but we brought it together, played as a team and worked their way out of it.”

Not finishing those innings came back to haunt Range Steel.

“Kaiden is a heck of a pitcher,” Range Steel coach Tony Potter said. “He’s probably the best pitcher in the league. Our bats didn’t find enough holes. That was the story there.”

Ranger Chevrolet added an insurance run in the fifth when Sweeney tripled with one out. He would score on a wild pitch.

Sweeney allowed five hits over six innings. He struck out 10 and hit a batter.

Fischer gave up six hits in five innings of work for Range Steel. He fanned five and walked three.

“We had played them three times before this, and they've been tough all year,” Potter said. “They were the team to beat. They were undefeated in the regular season.

“We got one by them last week. They came ready, and we made a couple more mistakes than they did.