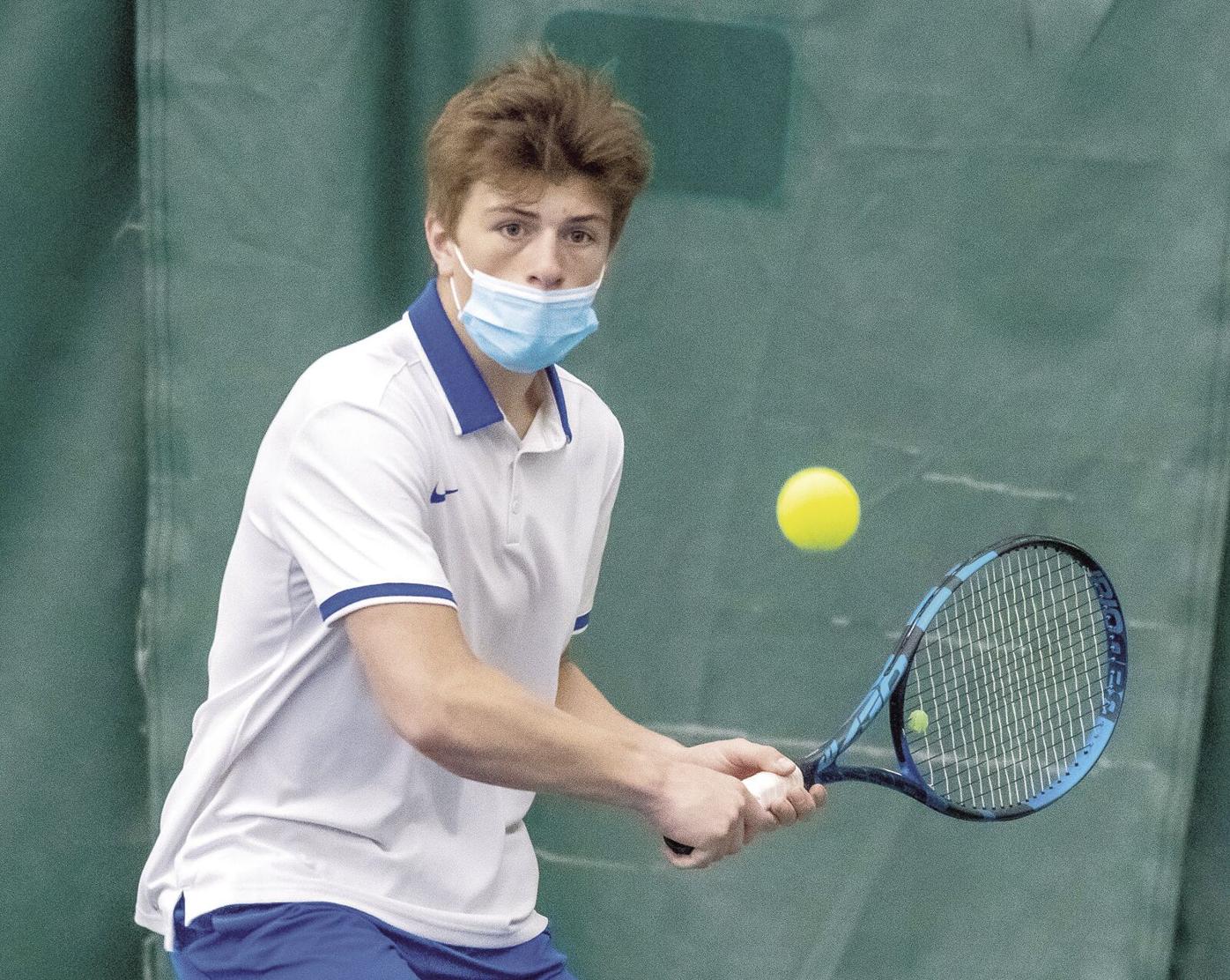 Rock Ridge's Gavin Benz eyes the ball as he winds up for a return during Thursday's home meet against Duluth East. 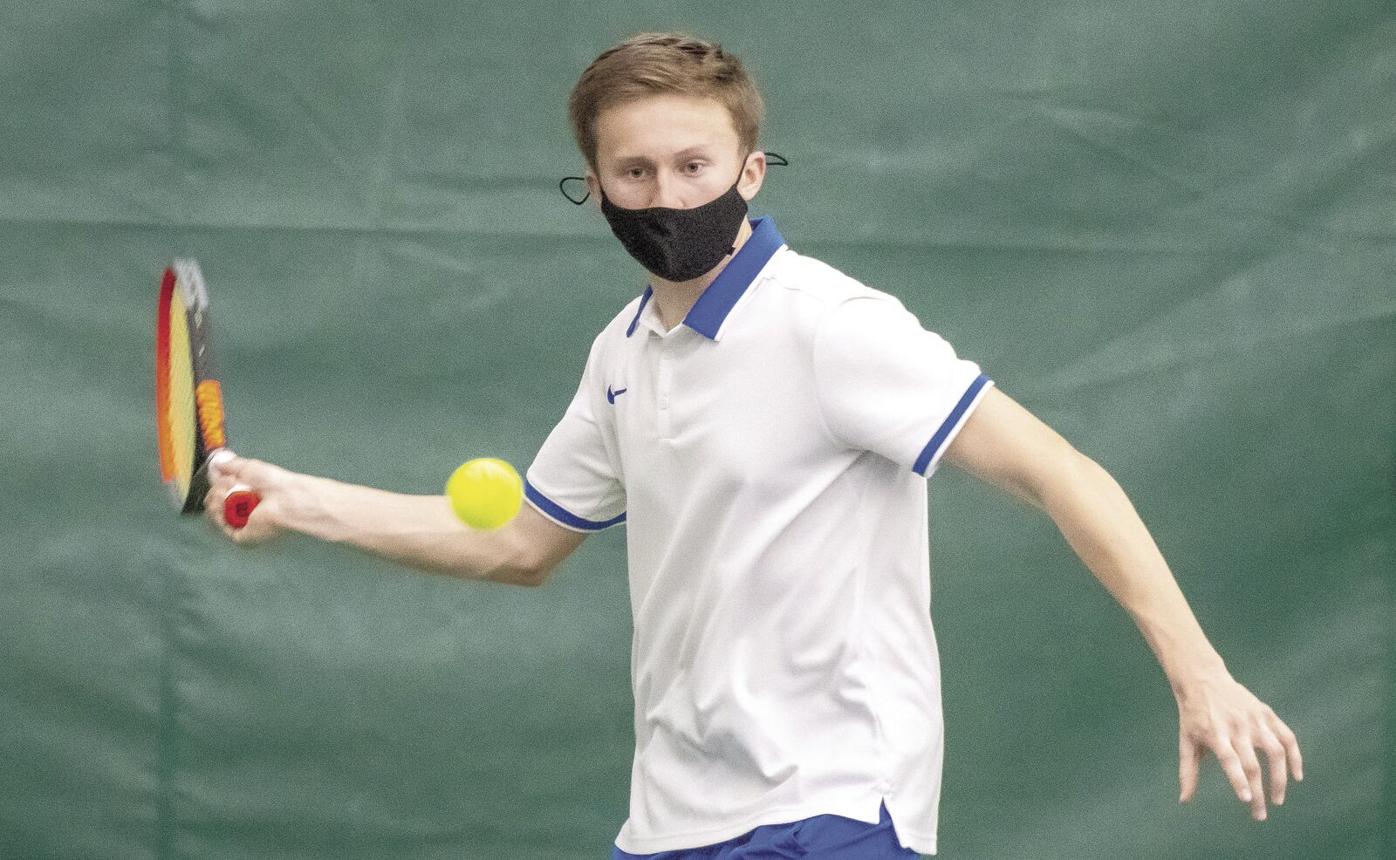 Rock Ridge's Gavin Benz eyes the ball as he winds up for a return during Thursday's home meet against Duluth East.

VIRGINIA — Opening their season with a tough opponent in Duluth East, the Rock Ridge boys’ tennis team battled hard but fell short to the Greyhounds, 4-3.

The two teams looked to be evenly matched in many ways, with Duluth East cruising to wins at the first three singles spots and the Wolverines doing the exact same in the doubles ranks. The closest match of the day came at No. 4 singles, where the Greyhounds’ Tommy Gunderson came out on top over Rock Ridge sophomore Jake Bradach, 6-4, 6-4.

Despite the loss, Rock Ridge head coach Jeff Mauston had praise for Bradach in the season opener.

“I think it was a pretty even match with those two,” Mauston said. “Jake doesn’t have a whole lot of varsity experience and I know he was real nervous, but he settled down and played a smart game. It was a long match and he had chances to win and just couldn’t get it done today but there’s nothing to be disappointed about.”

The Wolverines found their strength in the doubles side, with five of their six players being seniors. Defending section champions Ryan Scherf and Jace Westerbur cruised to a win at the No. 1 spot, downing Ryan Fowler and Andre Good, 6-0, 6-1.

At No. 2, the senior duo of Logan Bialke and Sam Berlin cruised in the first set against Ewen Moe and Colin McShane, 6-1, but had to work a little harder in the second. Ultimately, they pulled out the win, 6-4.

At the final doubles spot, senior Chace Powell teamed up with sophomore Ethan Avikainen and took down the Duluth East duo of Karl Thorson and Tanner Bombardieri, 6-4, 6-4.

With their more experienced players flooding the doubles lineup, Mauston expected the match to play out the way it did and thinks that’s where their strength will lie for now.

“The doubles do look sharp. They have a lot of experience together and they’re the older kids. Westerbur and Scherf are the section champs and they played excellent but I was really pleased with the kids at second and third doubles.

Berlin and Bialke had a wonderful match and it’s nice to see them play great tennis. Avikainen and Powell, another senior, got to play and see what it’s all about. He’s another guy that’s hung in there year after year and he’s earned his spot. These guys got their chance and took advantage of it and that’s what you like to see.”

On the singles side, Mauston expected East to bring strong competitors down the whole lineup and said it was a good start for his players on that side.

“I look at East’s top three guys and I don’t think we’re going to see anything like them again all season. I thought Jared Delich played extremely well against a kid that has all the tools and every shot available to him. Jack Elliot played some great tennis against a very tough opponent and Benz played well too at No. 3. The guys they played against are playing tennis year round and our guys are just coming off of hockey or wrestling or basketball. To me, I’d much rather see that and watch them get into the tennis groove.”

Rock Ridge will play host to Thief River Falls today. A solid program that often finds itself on top of Section 8A, Mauston says the Prowlers will be another tough test for the Wolverines.

“Every year they’re a strong team. They’re our nemesis in the regular season and we’ve probably seen them 10 times at the state tournament. They have a great program and it’s a treat that they always continue to travel here for us and we’re looking forward to it.”

Rock Ridge and Thief River Falls will do battle at 1 p.m. at the Tennis for All facility in Virginia. Hibbing’s previously scheduled match with TRF on Friday has been postponed.