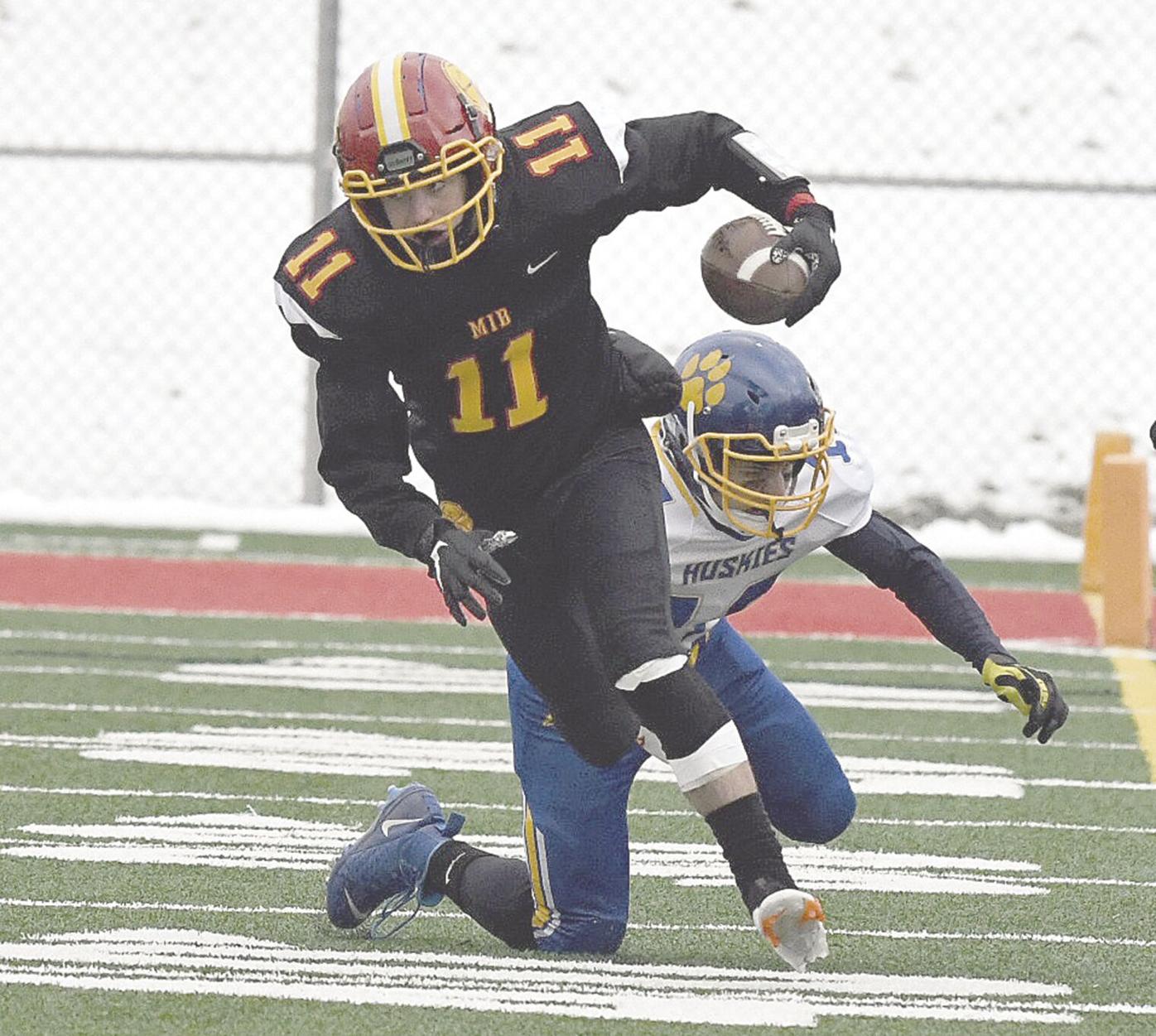 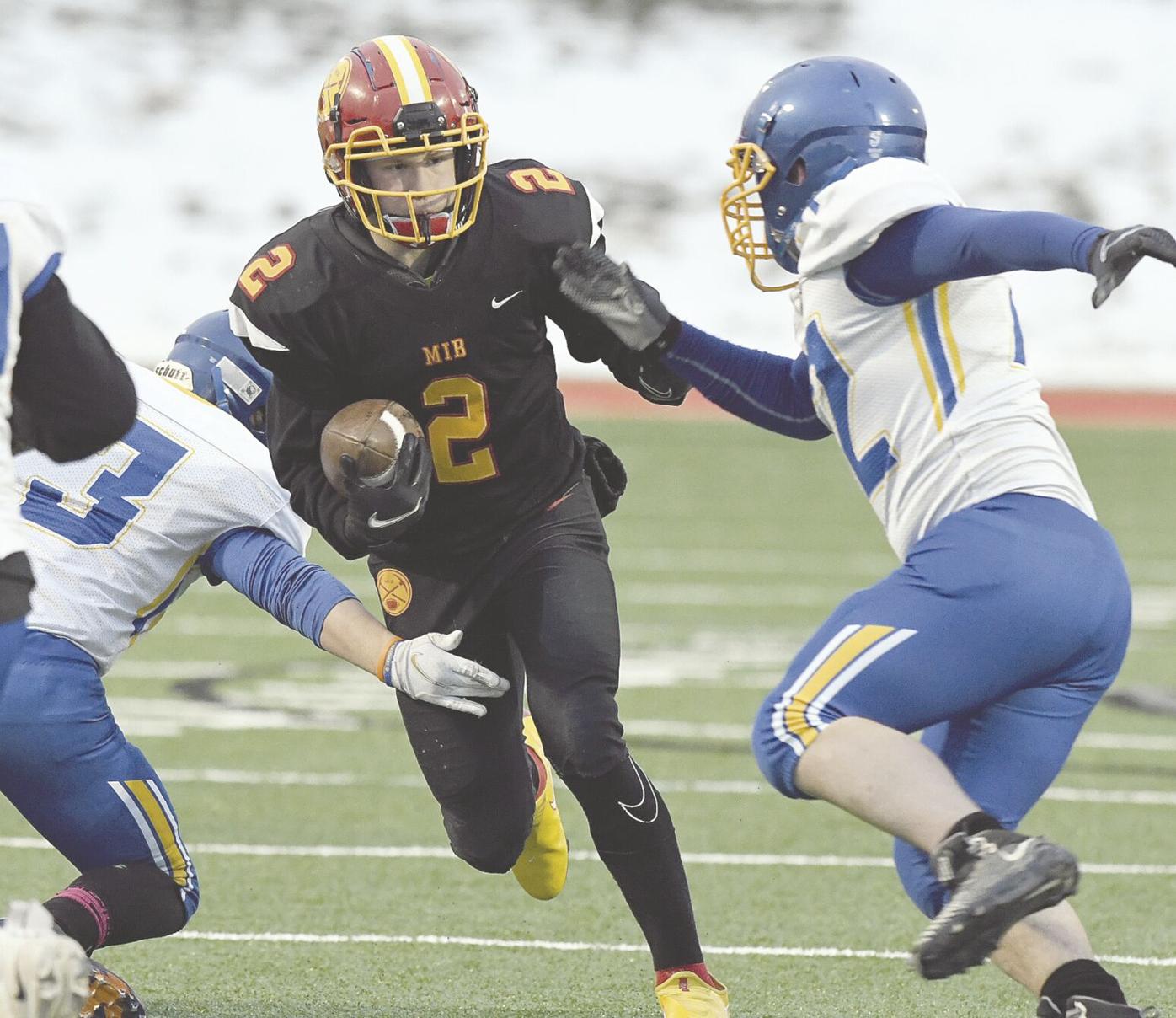 MOUNTAIN IRON — The Mountain Iron-Buhl football team is the two-time defending Section 7-Nineman champions, and Ranger coach Dan Zubich was hoping to make it three titles in a row.

Mountain Iron-Buhl’s bid to do that came up short this season, but not because they lost.

As a matter of fact, the Rangers defeated Bigfork 34-12 in a Section 7-Nineman semifinal contest Friday at their home field, but Mountain Iron-Buhl won’t get a chance to play for the title next week due to COVID-19.

All high school athletics were put on pause beginning at midnight Friday, so technically, no champion will be crowned this season.

That didn’t stop Zubich from putting in a claim for that third-straight title.

“They said we’re co-finalists, but we’re the two-time defending champs and nobody has beat us,” Zubich said.

The Rangers and Huskies are no strangers when it comes to meeting in the playoffs, and last season was a prime example of that.

“Bigfork is tough, and the same thing happened last year,” Zubich said. “It was three touchdowns to two at the half, then we won that one 52-16. It was the same type of thing, then we opened it up in the second half.

“They’re a good team, but they made some mistakes, putting the ball on the ground. Otherwise, they have a lot of guys coming back. They may be the section favorites next year.”

That same first-half scenario proved to be true as both teams scored two touchdowns each in the first seven minutes of the first quarter.

Mountain Iron-Buhl struck first when quarterback Asher Zubich connected with Riley Busch on a 15-yard scoring strike, but Bigfork returned the ensuing kickoff 55 yards to make it first-and-goal from inside the five.

A personal put the ball on the Rangers’ two, then Husky quarterback Caden Kalinen rambled into the end zone to make it 6-6.

Bigfork intercepted a Zubich pass on Mountain Iron-Buhl’s next possession, and that drive culminated in a Kallinen 1-yard plunge to give the Huskies a 12-6 lead.

The Rangers wasted little time tying the game as Coach Zubich went to his bag of tricks, pulling out the hook-and-ladder to make it 12-12.

Asher connected with Nik Jesch for seven yards, then he turned and lateralled the ball to Hunter Weigel, who took it the next 50 yards for the score.

“It would have been better had all of those touchdowns been ours, but it was 12-12 pretty quick,” Zubich said. “We gave them that long kick return, then we threw that interception, so they had two short drives.

That prophecy turned out to be true as Bigfork couldn’t get anything going the rest of the game.

In the meantime, Mountain Iron-Buhl took a 20-12 lead in the second quarter when Zubich hit Jesch for a 20-yard cold-blooded connection, and that’s how the half ended.

“We felt good at that point,” Zubich said. “At the half, we told them the game is already over if they don’t score. We usually play good run defense. Coach Buffetta had these guys coached-up well. They didn’t score in the second half.”

An eight-point lead is precarious at best, so Mountain Iron-Buhl needed some breathing room.

That came in the form of a fumble on the opening kickoff of the third quarter.

Asher Zubich rolled a kick to Bigfork front line, the ball was fumbled and the Rangers recovered.

It all happened by accident.

“If I told him to onside kick it, it wouldn’t work,” Zubich said. “That’s about the fifth one he’s gotten in the last two years, and none of them called. They (Bigfork) never quit, but it was huge for us.

“It got us all fired up again, then we scored right away.”

The younger Zubich led that drive to inside the Bigfork 10. He punctuated it with an 8-yard run to make it 28-12.

The Huskies would fumble again, but Bigfork’s defense stood tall.

The Huskies would fumble one more time in the fourth quarter, and this time, Asher Zubich connected with Jesch for a 4-yard scoring toss to put the Rangers up by 22.

“Our kids wanted more,” Zubich said. “We wanted to keep shutting them down, then score every time we had the ball.”

The Rangers might not be able to play for the actual title, but next season, Mountain Iron-Buhl will come back fully loaded again for another shot at the championship.

“We start one senior, so we have a lot of guys back,” Zubich said. “It’s sad because playing Friday night, we needed seven more days. The championship was supposed to be at 1 p.m. next week.

“What was going to change in seven days… I don’t know.”’