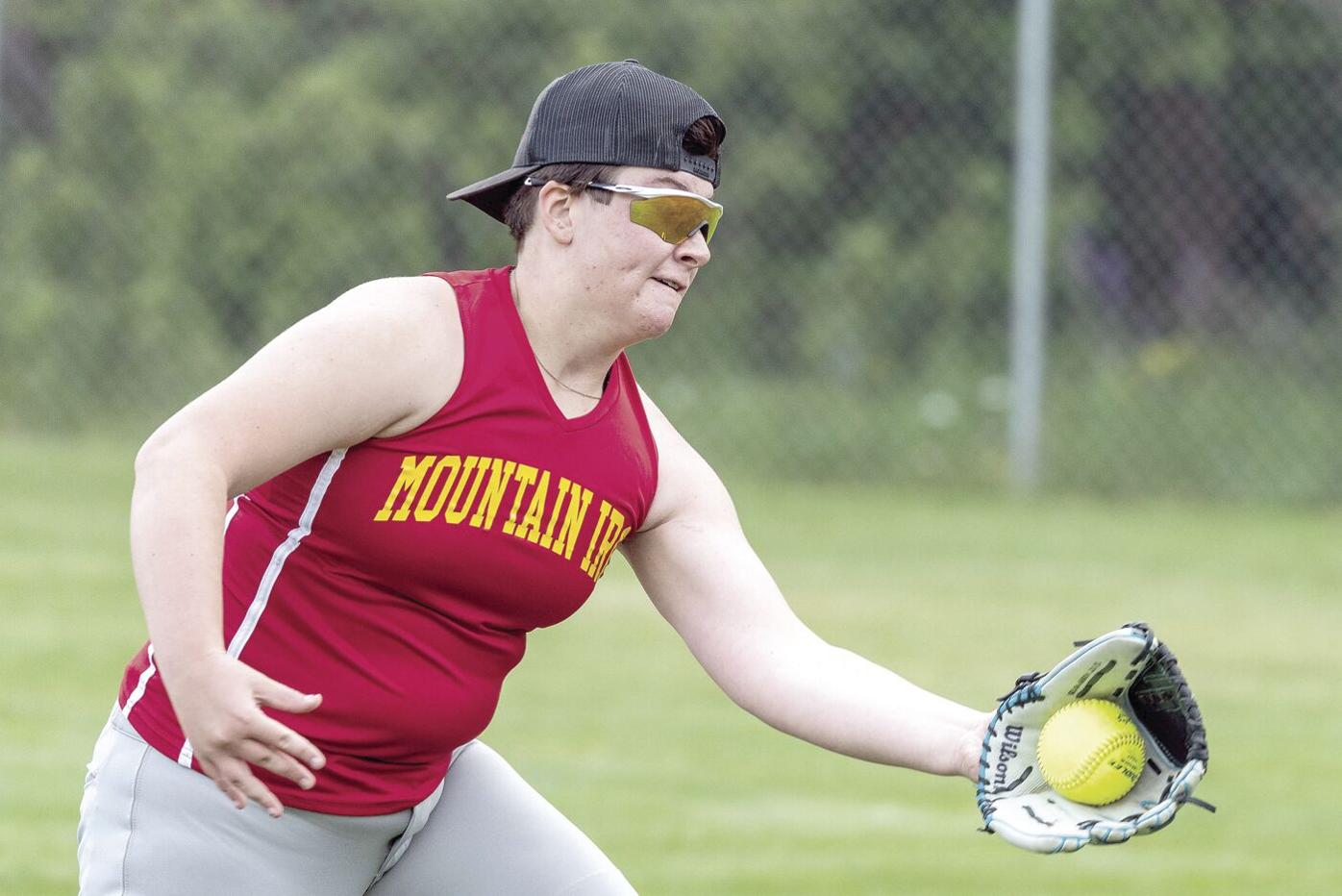 Mountain Iron's Libby Overbye runs down and gloves a sharp line drive to right field in the first inning of Monday's home game against Two Harbors. 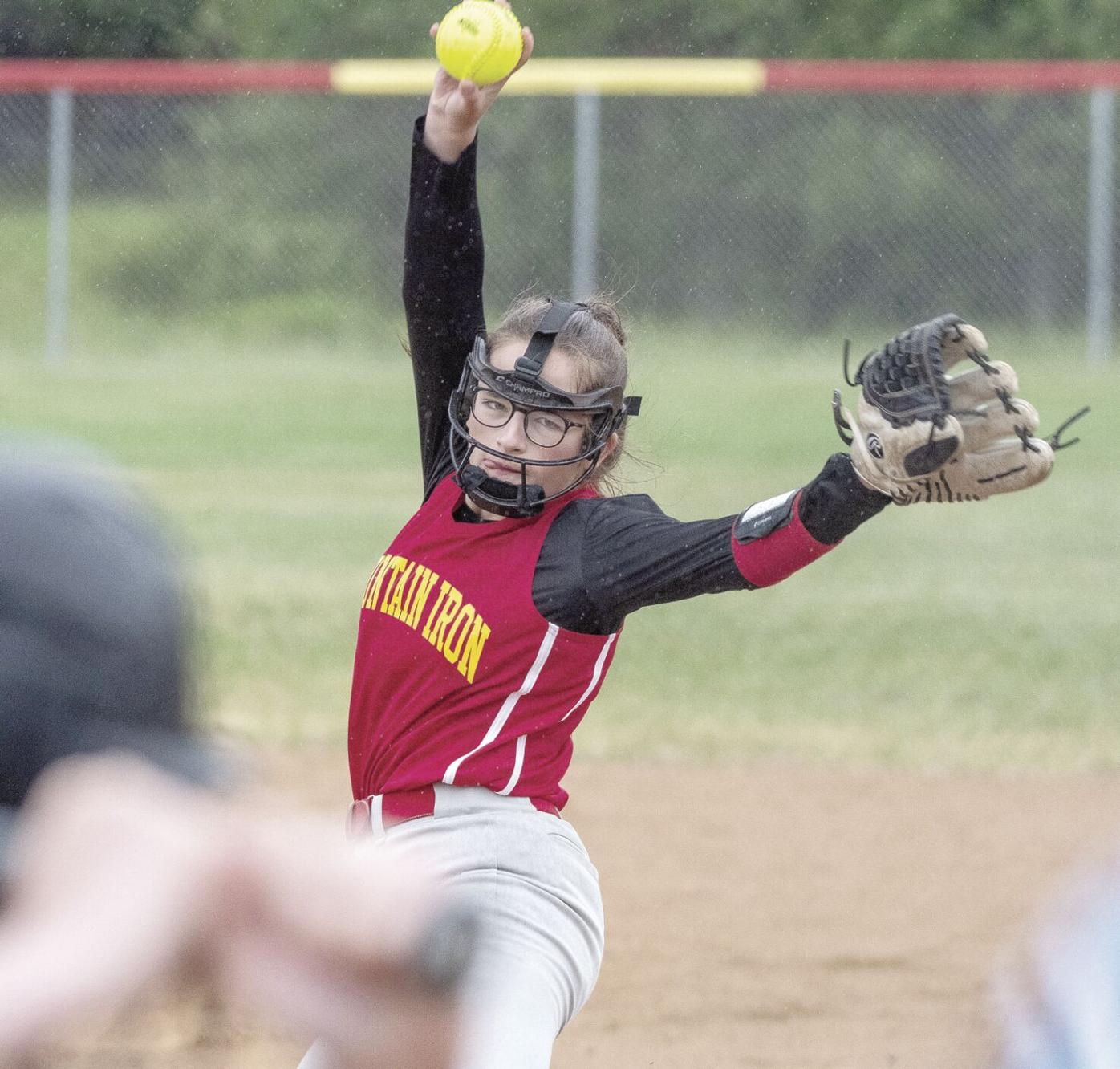 Mountain Iron's Marissa Anderson winds up to deliver a pitch through a stready drizzle while playing Two Harbors in Mountain Iron Monday evening.

Mountain Iron's Libby Overbye runs down and gloves a sharp line drive to right field in the first inning of Monday's home game against Two Harbors.

Mountain Iron's Marissa Anderson winds up to deliver a pitch through a stready drizzle while playing Two Harbors in Mountain Iron Monday evening.

MOUNTAIN IRON — Two Harbors made things close in the final inning, but the Mountain Iron-Buhl 18U softball team buckled down when they needed to, defeating the Agates 4-3 in the first of a two-game doubleheader at Larry Nanti Field.

Starting pitcher Abby White got the win for the Rangers, giving up one run on two hits and three walks in three innings of work. She struck out four along the way. Marissa Anderson pitched the final four innings for MI-B, surrendering two runs on three hits and three walks. Anderson fanned 10 in the process.

The Rangers wasted little time getting runs across home plate, scoring three in the top of the first.

Desi Milton led things off with a single to shallow center and then moved to second after Maleah Milton was hit by a pitch. The pair each stole a base before Desi Milton was driven home on a single up the middle from Sam Hoff, 1-0.

Runners on the corners, Hoff stole her way to second with Ellie Otto at the plate. Otto reached first on an error from the Two Harbors second baseman which allowed Maleah Milton to score with Hoff moving all the way to third.

One out away, Alix Swanson put the ball into play with Two Harbors opting to throw her out at first, allowing Hoff to score from third. With one inning away, MI-B found themselves up a quick 3-0 on their opponents.

The Agates put one run of their own on the board in the top of the third. Rachel Bopp reached on a fielder’s choice and then was moved to second on a single to left field from Casey Underdahl. Two Harbors then loaded up the bases with Megan Larson reaching on an error charged to the Ranger third baseman.

Ava Fossness came up to bat for the Agates and with a wild pitch from White, Bopp came home to score to make it 3-1 MI-B. Fossness eventually reached after being hit by a pitch to keep the bases loaded. White, however, got out of the jam, striking out Olivia Fossness on the next at bat to end the inning.

Anderson came in to pitch starting in the fourth inning and wasted little time, going three up and three down while recording two strikeouts to keep Two Harbors off the bags. Coming up to bat in the bottom of the fourth, the Rangers looked to build on their lead.

A bunt single from Maleah Milton got things started for MI-B. Milton then moved her way to second on a fielder’s choice. One out away, an RBI sacrifice from Otto brought Milton home to make it 4-1 MI-B.

Anderson was effective in the pitcher’s circle in the fifth and sixth, flustering the Agates while recording five more strikeouts in both innings combined. In the top of the seventh, however, Two Harbors got their chance to tie the game or even take the late lead.

Two away already on a pair of Anderson strikeouts, Tokvam reached on a Rangers error from the first baseman. A single to center field from Bopp then moved her to second. Underdahl at the plate, both runners advanced a base and came home on a shot to center from the batter, making it 4-3 MI-B.

Larson at the plate, Anderson walked the batter to put runners on first and second with two outs. Looking to tie the game or even take the lead, Ava Fossness stepped up to the plate looking to play hero.

Anderson, however, found her stuff again, striking out the batter to end the contest, giving MI-B the 4-3 win.

After the win, Rangers head coach Jesse White said it took his team a little bit to buckle down and earn the final out, but eventually they found a way to do just that.

“We got a little lackadaisical in the last inning,” White said. “Maybe we let them get a few more runs than we should’ve so we have to work on that. Overall, I’m pleased with what we did out there today.”

Always happy to get a win, White said it’s more important for his players to learn during summer softball as a way to prepare for the spring season.

“This is summer ball. We look at it as time to teach, learn, push ourselves and do different things. Like we had some girls out there trying to bunt that don’t normally bunt. It’s things like that you try and work on so they have an idea coming into spring ball. We’ve got different girls in different spots so we’re working today on what we want to do in the spring.”

With heavy rain falling during the middle innings, White says that in itself was another opportunity to learn.

“You have to learn to deal with the elements and stay focused. We did that for the most part. When you lose your focus you have to pull it together and finish it off.”

Ultimately, White says the goal for summer ball is to get better but also have fun.

“They played well. They play to have fun. Some people take it a little too serious. We try not to be so serious. We work on fundamentals, try new things and work hard on things we were weak on in the spring. But most importantly we go out to have fun.”

Mountain Iron-Buhl’s second game with Two Harbors was not complete as this edition went to press.