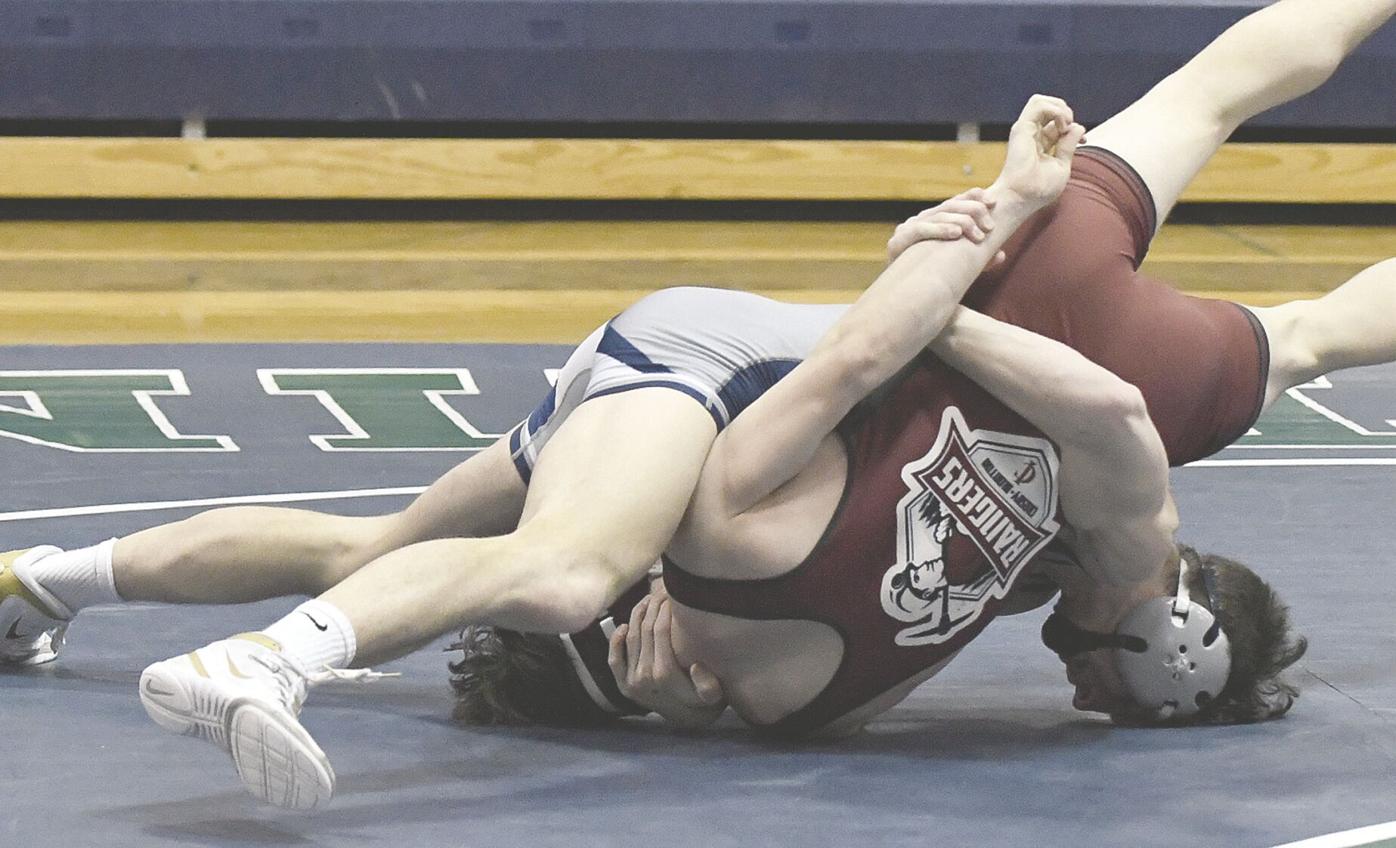 Hibbing’s David Platt (top) is about to pin Crosby-Ironton’s Colby Hanson during the Nashwauk-Keewatin/Greenway Triangular Monday in Nashwauk. With the fall, Platt became the Bluejackets’ all-time pins leader with 100. He picked up his 101st fall against the Titans. 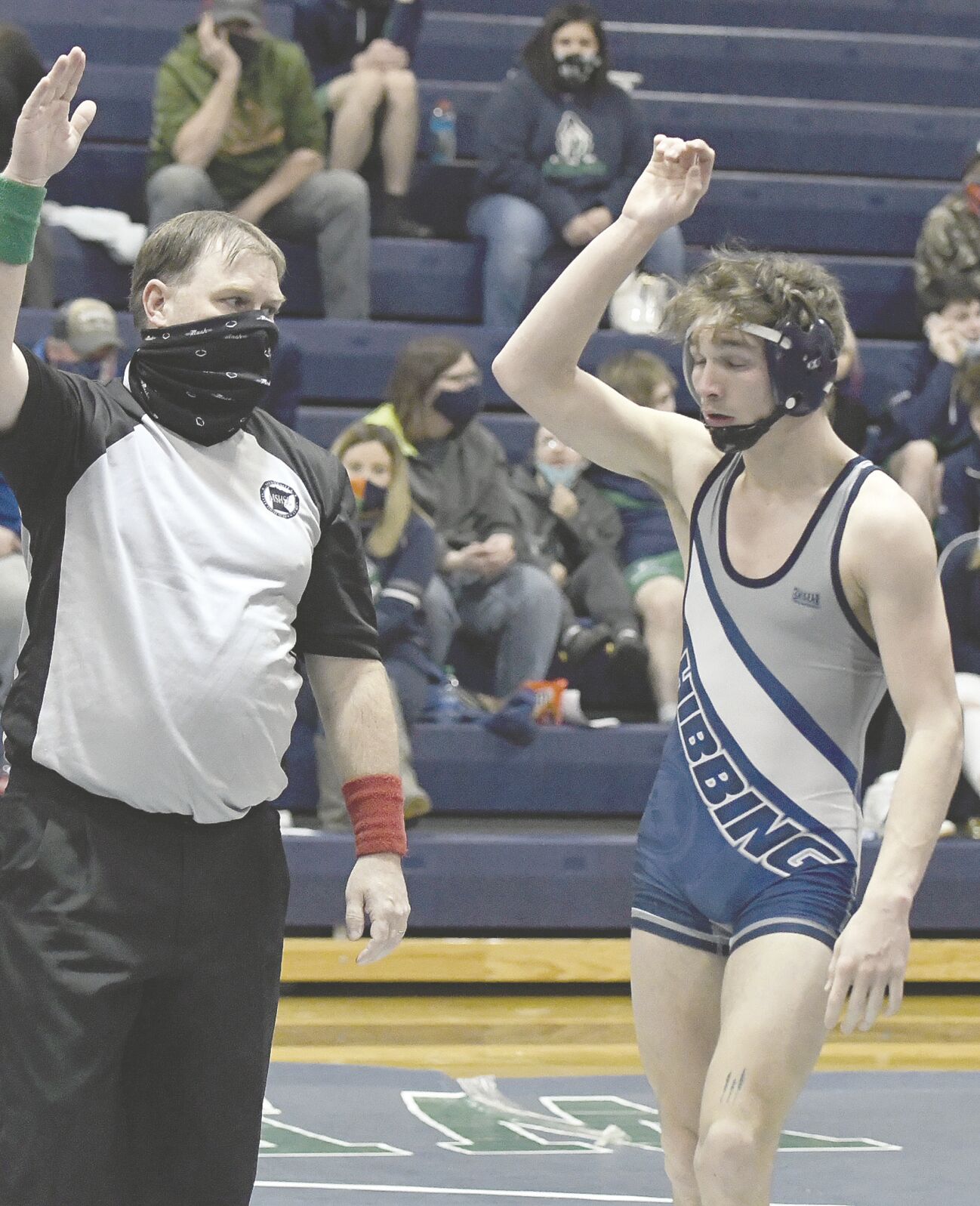 Hibbing’s David Platt raises in hand in victory after he recorded his 100th-career fall in a match against Crosby-Ironton. He surpassed Will Johnson, who previously held the record with 99.

Hibbing’s David Platt (top) is about to pin Crosby-Ironton’s Colby Hanson during the Nashwauk-Keewatin/Greenway Triangular Monday in Nashwauk. With the fall, Platt became the Bluejackets’ all-time pins leader with 100. He picked up his 101st fall against the Titans.

Hibbing’s David Platt raises in hand in victory after he recorded his 100th-career fall in a match against Crosby-Ironton. He surpassed Will Johnson, who previously held the record with 99.

NASHWAUK — The Hibbing High School wrestling team set a pair of milestones in two wins over Crosby-Ironton and Nashwauk-Keewatin/Greenway.

David Platt reached the 100-pin mark, breaking the record held by Will Johnson, and Bryson Larrabee won his 60th match as the Bluejackets won 52-24 over the Rangers and 64-12 over the Titans Monday at the Nashwauk-Keewatin High School Gymnasium.

“I’ve always thought any recognition we can give the kids for the hard work they do, we want to,” Pierce said. “If there’s something we can award them with, we give it to them, especially when they earn it like that.

“Getting 60 wins as a 10th-grader, that’s a good milestone to hit. It’s good to see that stuff. It’s good for the team to see it.”

Hibbing started off the Crosby-Ironton match on the right foot as 103-pounder Christian Jelle won by fall at 55 seconds. The Bluejackets gave up a forfeit win to Dillon Bama at 120, but Ethan Roy got that win back with a forfeit win at 126.

Gabe Martin won by fall at 1:32 at 132-pounds, but John Paul Fitzpatrick got that pin back for the Rangers at 138-pounds.

That’s when Platt stepped on the mat.

The Bluejacket senior won by fall at 1:04 at 145-pounds to finally pass Johnson’s mark.

Platt had two chances to break the record last Saturday, but he won matches by default and forfeit.

“It almost started to feel like we were getting jinxed a little bit,” Pierce said. “That’s what we didn’t want. When you start getting into the section, that’s where you run into tougher competition.

“David can pin those guys, but things get tougher. He’ll keep piling them on now, and it will go back to usual.”

Owen Hendrickson followed that up with a 12-3 major decision at 152, then Bryson Larrabee won by fall at 5:00 at 160 for his milestone victory.

Michael Fitzpatrick would get a pin at 1:30 at 182-pounds for Crosby-Ironton, but Drew Shay got that back with a forfeit win at 195.

Ian Larrabee would win by fall at 10 seconds at 220, then the match closed out when the Rangers’ Conner Zender won by forfeit.

“I liked that we went in and got the matchups that we wanted,” Pierce said. “We were hoping that they would put John Paul on David, but that’s OK. I get it. Everybody wrestled tough.

“That’s the thing. When you come here and everybody is wrestling good, you make some milestones, and you have kids that don’t get into the lineup, getting a match that they don't usually get. We had close battles.”

Against Nashwauk-Keewatin/Greenway, Hibbing took advantage of seven forfeit wins to sweep the triangular.

For Larrabee, it was a redemption match as Marks beat him 6-0 in January.

Larrabee, who is only an eighth-grader, credited the maturity he’s picked up since that last match.

“I’ve matured a lot, both as a person and in wrestling,” Larrabee said with a chuckle. “I was acting immature. I was trying to throw people, trying to get things over with right away.

“The coaches have been helpful with teaching me more upper body things, and helping me out on not getting stuck in bad positions. I have to give it to my coaches for being there at practice every day, and helping me out by telling me what I need to do better.”

Even so, when Larrabee looks at Marx, he gets a little intimidated.

“I’m not going to say that I’m not intimidated because there’s always a little bit of that,” Larrabee said. “Once you get out there it’s like everything goes away. It’s you and him, trying to be able to beat him.

“You have to push away the fact that, ‘Wow that kid is really big. He’s a senior.’ With the muscle mass, you have to put that to the side a little bit even though it might be hard. It’s me vs. this kid. I can’t focus on the size of them.”

The Titans got wins from John Duffy by forfeit, and Domonick Holcomb by fall at 4:45.