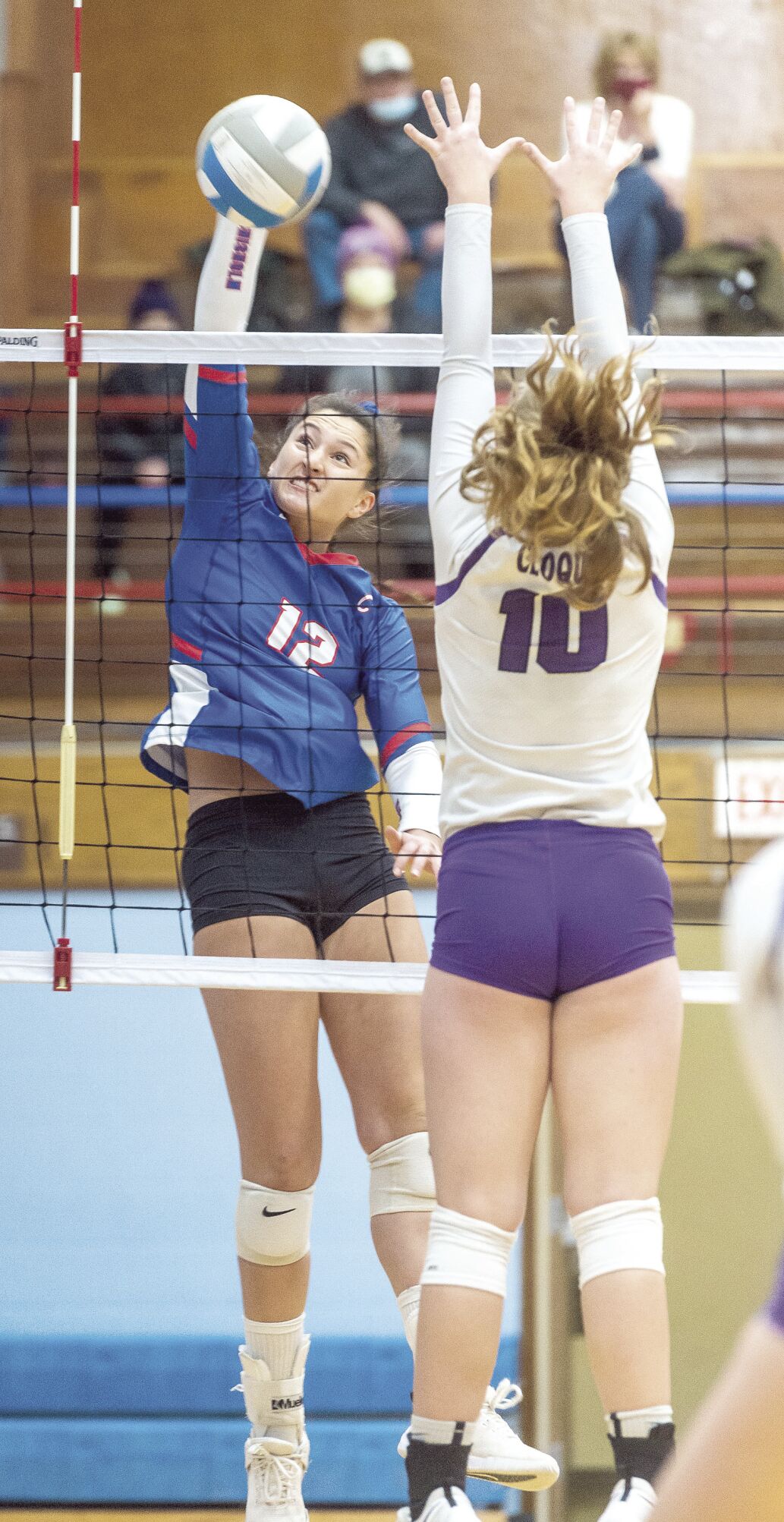 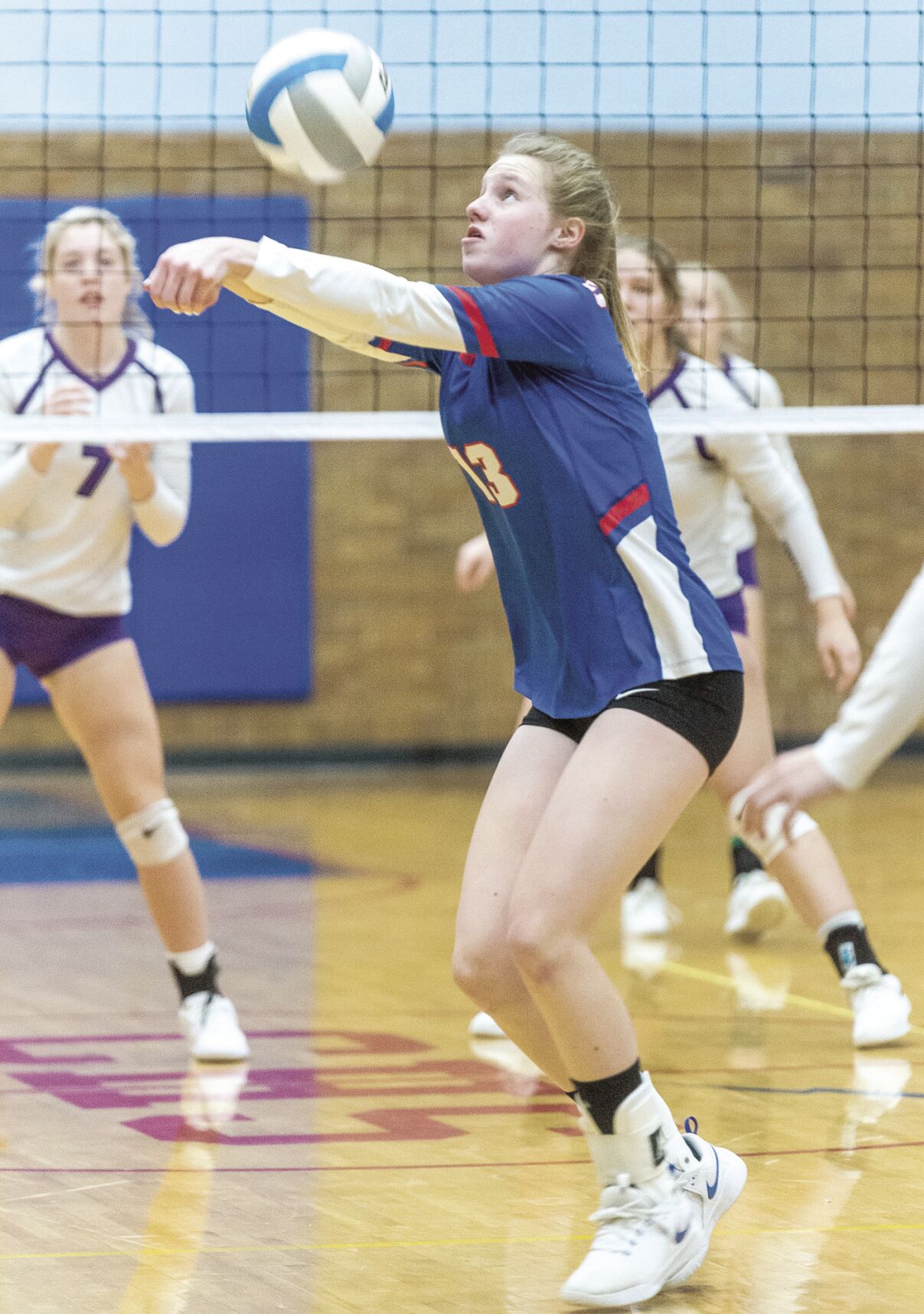 Chisholm’s Jordan Temple keeps the play alive in the back court during Thursday night’s home game against Cloquet.

Chisholm’s Jordan Temple keeps the play alive in the back court during Thursday night’s home game against Cloquet.

CHISHOLM — It’s not often that the Chisholm High School volleyball team gets to play a Class AA team, but that was the case when Cloquet visited Bob McDonald Court in Roels Gymnasium.

The Bluestreaks were supposed to be playing Hibbing, but when ISD 701 went to distance learning, that game was called off, so Chisholm put out a feeler to see if they could get another opponent.

Enter the Lumberjacks, and the Bluestreaks didn’t back down to the bigger school, but Cloquet came away with a 3-0, 25-13, 25-18, 25-21 victory Thursday in what will be the two teams’ final matches of the season.

According to Cloquet coach Heidi Anderson, it was the first time in her team has played on the Chisholm floor.

“Chisholm asked us to play,” Anderson said. “We were supposed to be playing Hibbing and Virginia this week, and we ended up with Mesabi East and Chisholm. This was fun. It’s a loud gym, so it was exciting to play in it.

“We had to remind our girls to take a breath and settle down, but we played well. It’s fun to be playing some of our best volleyball at this point of the season.”

Chisholm coach Pam Pioske, even in defeat, was impressed with the way her team played.

“For how small of a school we are, and we don’t get to play teams like Cloquet very often,” Pioske said. “When we do get to play them, with teams like that, sometimes we’re not ready to play.

“I thought that we pulled it together, and we played quite well against them. We did what we needed to do, and I’m so proud of them.”

The only game Pioske wasn’t impressed with was set one.

Cloquet took an early lead and cruised to the 12-point victory.

“In the first game, we didn’t play well, especially with a lot of hitting errors,” Pioske said. “In the second and third games, we did a lot better. We still had some errors, but it wasn’t as bad as our first game.”

In set two, the Lumberjacks couldn’t shake the Bluestreaks, maintaining a one- to two-point lead through most of the game.

“I thought they were smart,” Anderson said. “Chisholm is a good team, so we had to take a deep breath. We were lucky to get out of here. I took a timeout early, and we talked about playing smart, and knowing that Abby (Thompson) is such a force.

“We tried to look at where she was and notice when she was in the front row and the back row and address it accordingly. She is so talented that it’s play-by-play of looking at, ‘What does my block look like?’ They’re a scrappy team, too.”

Chisholm tried in vain, but it couldn’t get the game tied the rest of the way.

“That was big,” Pioske said. “When you get that big of a lead, or a run all at one time, all of a sudden you have momentum. Your energy picks up. That’s what happened with Cloquet. They started playing better.

“We started worrying , so we ended up making a few more mistakes, but I thought we did well. I wish they would have come alive in that first game because maybe by the third game, we could have taken one from them.”

Thompson did lead Chisholm with 13 kills and eight digs. Jordan Temple had 17 assists, 10 digs and one ace.