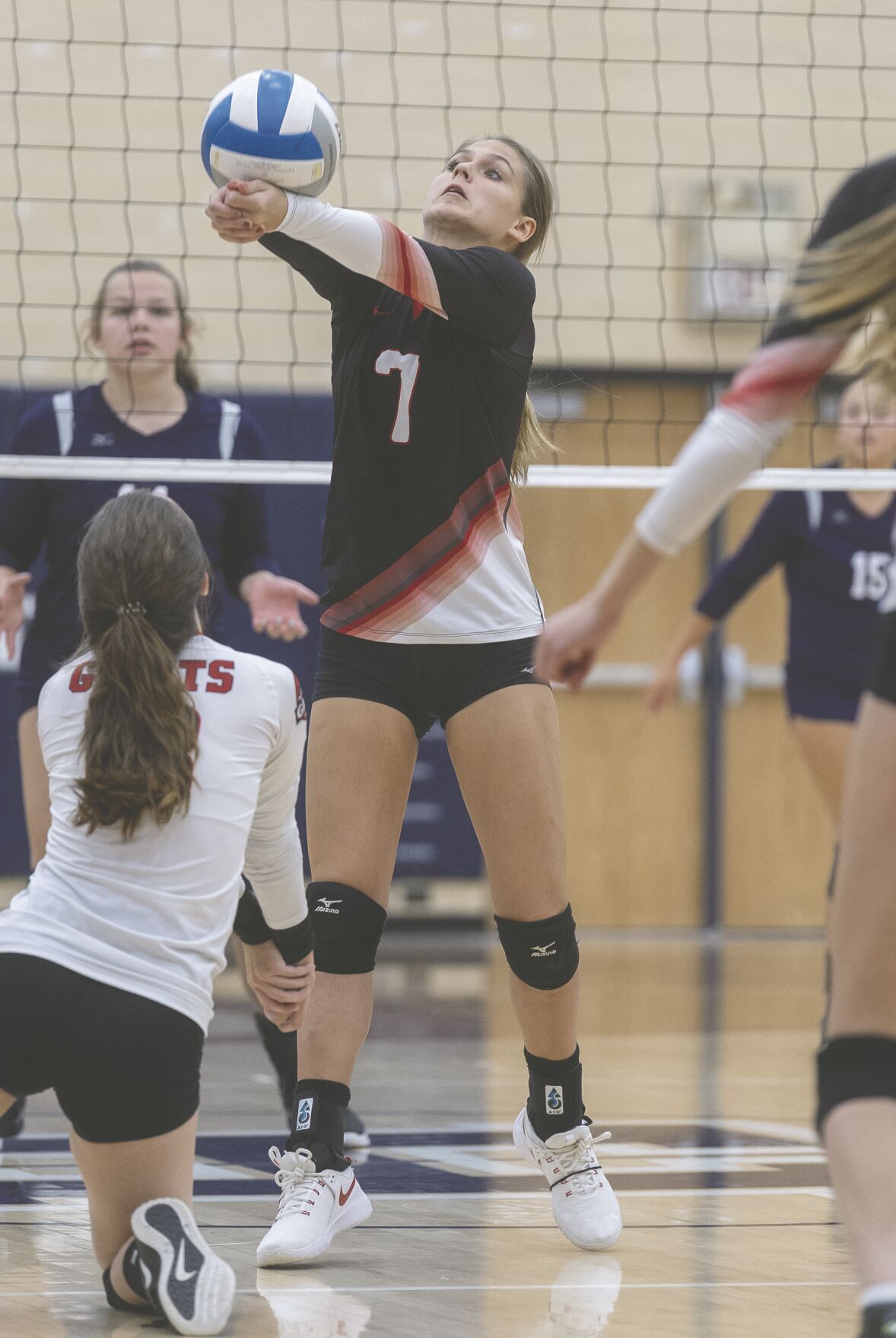 Mesabi East’s Elli Theel saves the ball to keep the play alive during Tuesday night’s game against Hibbing in Hibbing.

Mesabi East’s Elli Theel saves the ball to keep the play alive during Tuesday night’s game against Hibbing in Hibbing.

HIBBING — Before a team can be successful, it has to learn how to win.

The Hibbing High School volleyball team is on that path to success.

Hibbing took an early 2-0 lead over Mesabi East, but the Giants battled back to tie it 2-2

In games one and two, Hibbing played the way Coach Lauren Peterson wanted them to play.

“What I liked was the teamwork,” Peterson said. “They kept up their positive energy. That second set was awesome.”

“In the first game, we played well, then we lost momentum,” Baribeau said. “We were playing out of sync, then we continued that in the entire second game.”

For the Giants this was their third game in five days. On Monday, Mesabi East went five games with Nashwauk-Keewatin, so there may have been some fatigue setting in.

“We had girls in swimming and cross country Monday, so I thought it was fatigue,” Baribeau said. “I was worried going into that third game that we were going to get shut out just because of how we played in that second game.”

As it turned out, Baribeau didn’t have anything to worry about.

The Giants turned the tables on Hibbing and won going away.

“I took my three seniors aside and talked to them,” Baribeau said. “I wanted to see if they could help me out, to take some of the leadership. During timeouts, what I was telling the girls wasn’t exactly working, so I needed some playmakers.

“I wanted them to lead that. They took command. They did things for the girls that I couldn’t do. I give credit to them for turning that game around.”

For Hibbing, that was learning point No. 1.

Instead of putting the pedal to the metal to get the sweep, the Bluejackets didn’t come out with that same fire in game three, and Mesabi East took advantage of it.

“I think those first two wins got to their heads a little bit, and they got overconfident,” Peterson said. “I want them to be confident but not overly confident.”

In game four, that’s where the Bluejackets learned another valuable lesson — don’t get tentative and hesitant.

That’s what Hibbing did, going more to a tipping game rather than a hitting game, and that came back to haunt the Bluejackets.

“We have to practice that in practice,” Peterson said. “I need to take advantage of utilizing the blocks and getting our swings down. That’s what happened. They put a good kill on us, and the girls played scared.”

Peterson had some work to do to get her team ready for the fifth game.

“I reminded them that they needed to play their game,” Peterson said. “They can play up to a better level than that. I’ve seen it. I kept believing in them.”

The Bluejackets did fall behind in the first half of the fifth game, but the score was tied 8-8 when Hibbing went on a 7-2 run to close out the game.

“That’s them. That’s how they play, and that’s how they should have played in the third set,” Peterson said. “That’s alright. We need to be brought back down to be put back up again.”

That fatigue factor may have come into play for Mesabi East, and more importantly, the Giants lost all of the momentum they had in games three and four.

“The girls get hung up on their mistakes, they play a little bit worried, more reserved instead of going for that kill or that play that will make the difference,” Baribeau said. “That’s what happened in that fifth game.

“They had some nerves and fatigue set in. They were making a few more errors. We gave up way too many free balls, which allowed them to set it up easier. We had to be on defense way too much. We’ll work on that in practice.”