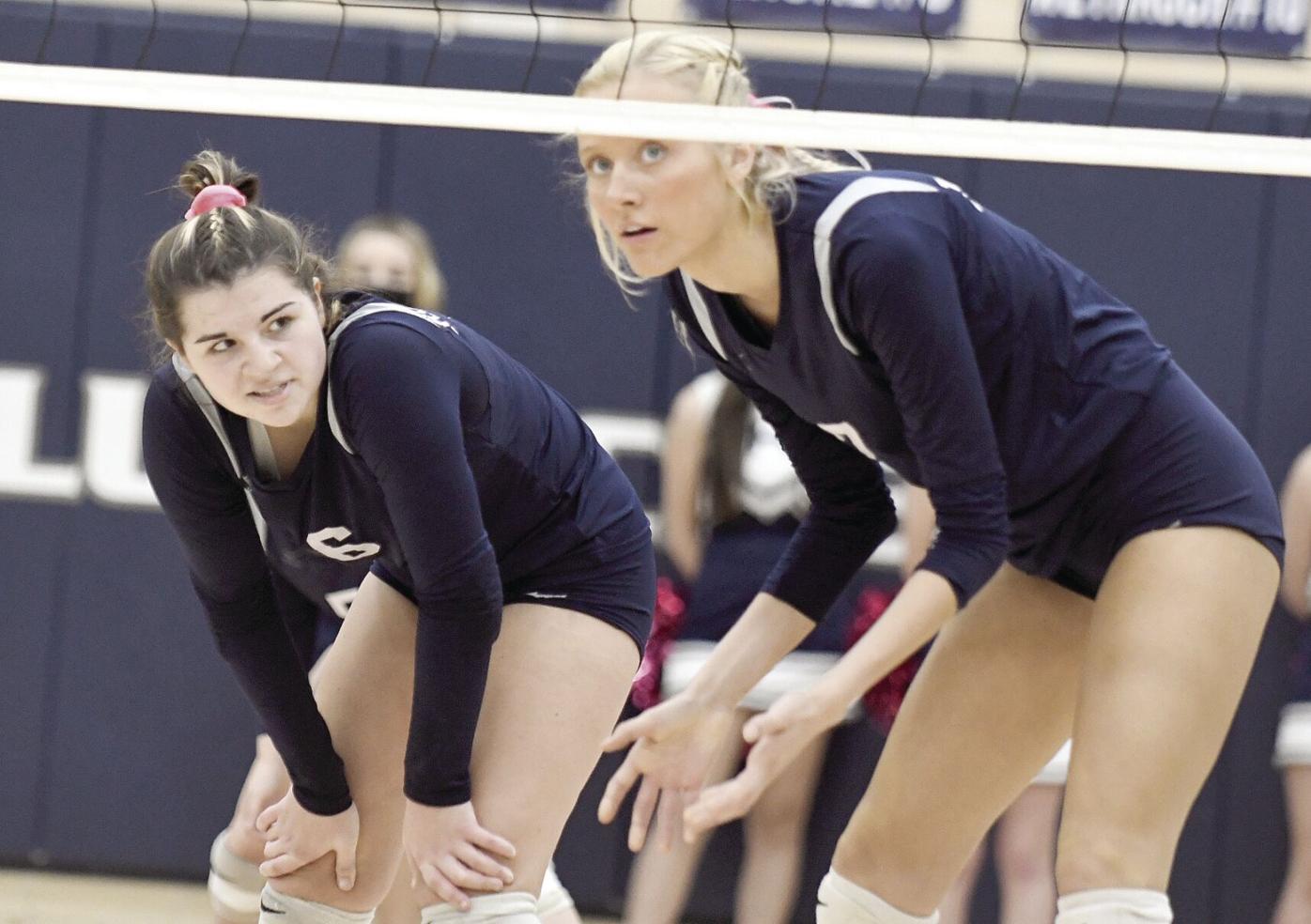 Hibbing’s Ariana Jaynes (left) and Bailey Broker get prepared for a serve during their match with Duluth Marshall at the Lincoln Elementary School Gymnasium Tuesday. 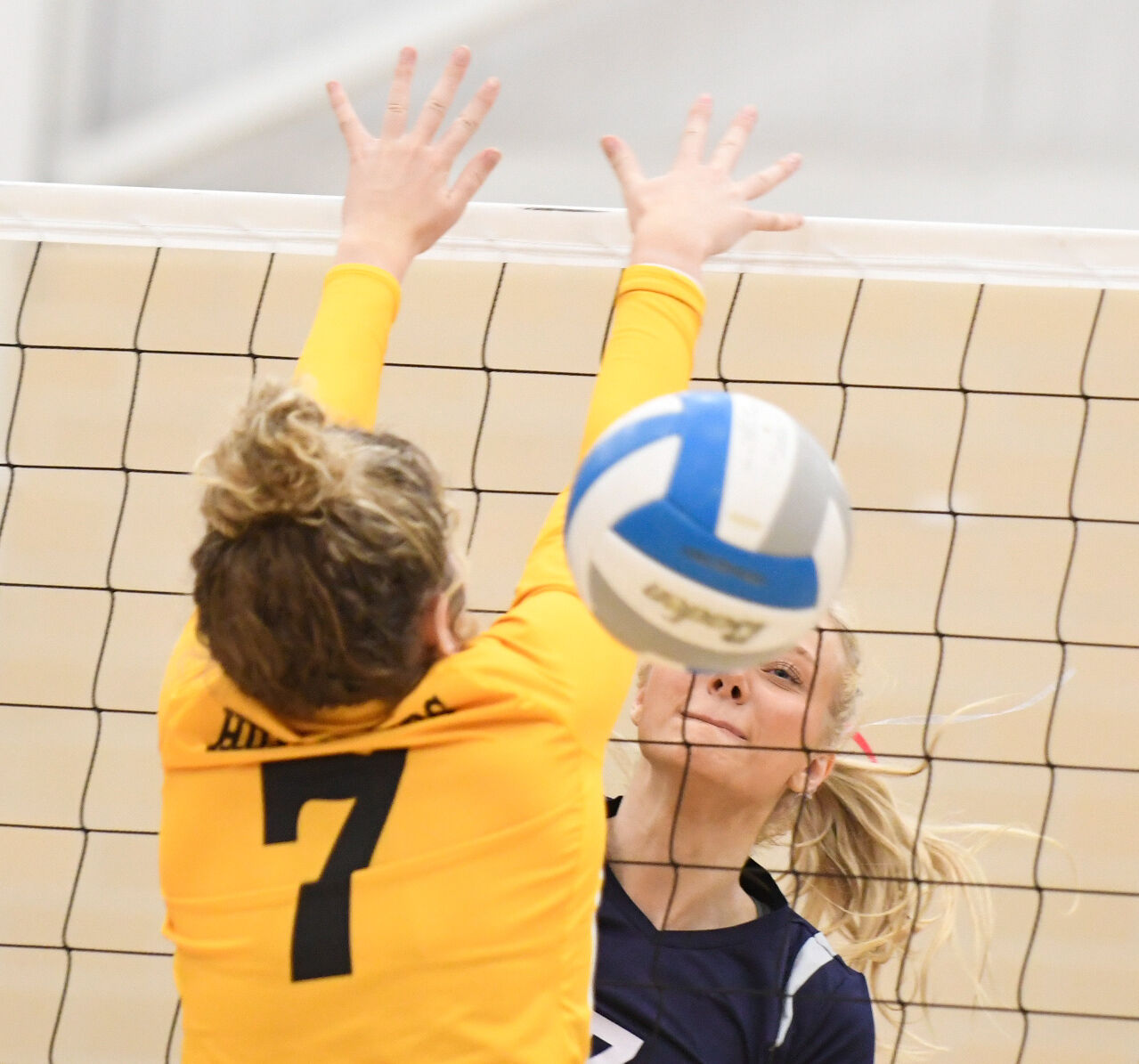 Hibbing’s Bailey Broker (right) hits a kill past the block of Duluth Marshall’s Anna Heeren during their match Tuesday in Hibbing.

Hibbing’s Ariana Jaynes (left) and Bailey Broker get prepared for a serve during their match with Duluth Marshall at the Lincoln Elementary School Gymnasium Tuesday.

Hibbing’s Bailey Broker (right) hits a kill past the block of Duluth Marshall’s Anna Heeren during their match Tuesday in Hibbing.

HIBBING — The Hibbing High School volleyball team will be heading into the Section 7AAA playoffs on a two-game winning streak, but the Bluejackets had to work for it.

The outcome was in doubt until the final point was scored, but Hibbing coach Lauren Peterson knew how important this win would be.

“It’s important to give us a little boost,” Peterson said. “We have a long break, so we’ll have to go back and remember this win, then go forward in the playoffs.”

It looked like a Bluejacket sweep after they won set one, but the Hilltoppers had other ideas when they came back and took set two.

“The second set was important because it was the energy flip our girls needed,” Nelson said. “That helped our momentum move up. We were playing scrappy. We were working hard to not let the ball touch the ground.

“We kept up with them, but unfortunately, we didn’t come through in the end. Other than that, it was a lot of fun.”

It was 21-15 Bluejackets, but some off-speed hits and some well-placed serves pull Marshall into a 22-22 tie.

The Hilltoppers would get the next three points to lead 2-1.

“They had to be strategic with how they tried to receive the sideout,” Nelson said. “When they did, that gave them the momentum to push through and keep going. They just had to get a sideout, and serves are important for our team.

“When we have a consistent game of serving that helps us be competitive with other teams. We were on with our serves today, so that was good.”

Hibbing was getting frustrated.

“We can’t combat each other. We have to play together.”

The tables turned 180-degrees in set four as Hibbing jumped out to a 16-6 lead.

This time, the Bluejackets didn’t let the lead slip away.

“It was our defense,” Peterson said. “We were slow on our feet, then we picked up our defense, realizing that we still had to play defense, too, not just offense.”

That set the stage for the match-deciding Set No. 5, which started off with both teams exchanging points until it 7-7.

Needless to say, Peterson got a little nervous at that time.

Marshall would take a 9-8 lead, which made Peterson a little nervous.

“I get concerned,” Peterson said. “I’m like, ‘Oh my god, this games going to be over like that if we don’t pick it up.’”

With Lucy Gabrielson on the service, Hibbing would got the next three points to take an 11-9 lead.

“I’m hoping that we can keep some positive energy because one point in a tight game like that can completely change the game,” Nelson said. “It did. We kept up with them, but once they got those points, it flipped on us.”

Gabrielson served up the next four points to seal the deal. Ariana Jaynes and Bailey Broker did have kills in that run.

“That was important to stay focused in a game like that,” Peterson said. “To finish it out to 15 is huge. Lucy did a great job back there serving. That’s a lot of pressure. She did it well.”

“The importance of this win is that it was the seniors’ last home game,” Peterson said. “Just to get this win solidifies that we’re still in this, we still have a chance. It should give them that little edge.”