Hibbing’s Jerzie Gustafson dives to save the ball during the Bluejackets’ match with Chisholm Thursday at the Lincoln Elementary School in Hibbing. 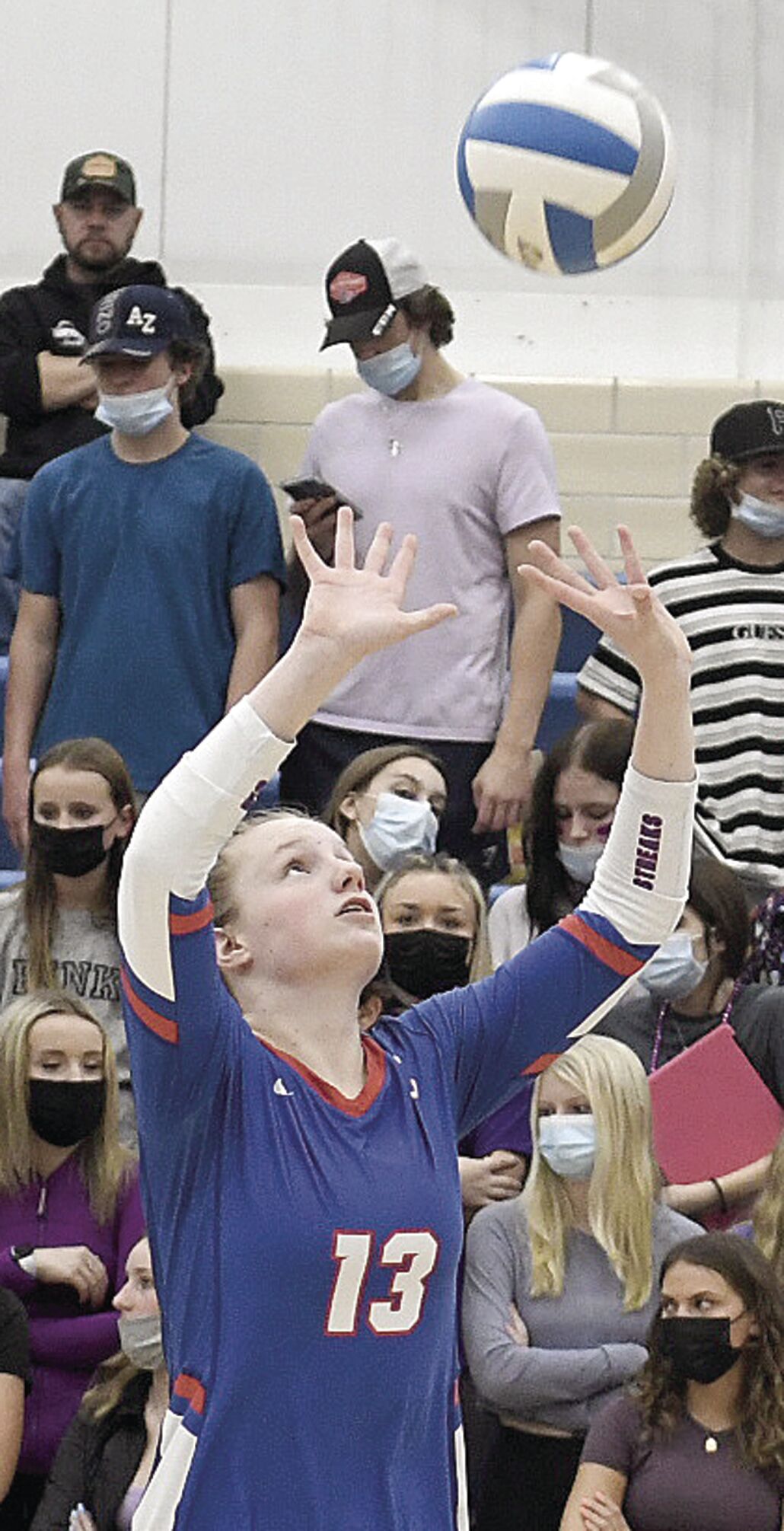 Chisholm’s Jordan Temple set a ball for the Bluestreaks. 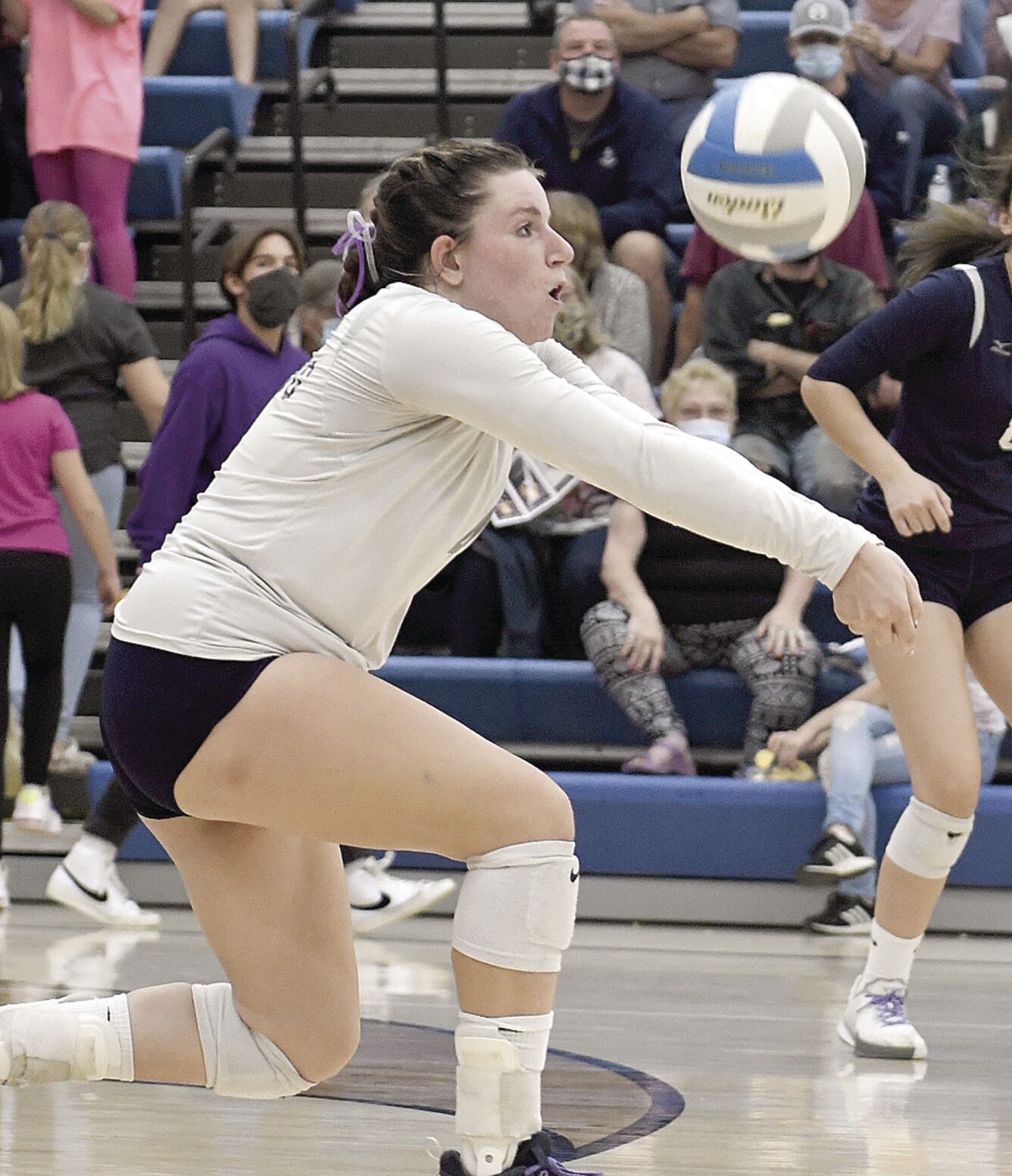 Hibbing’s Bella Scaia bumps a ball during the Bluejackets match with Chisholm Thursday in Hibbing.

Hibbing’s Jerzie Gustafson dives to save the ball during the Bluejackets’ match with Chisholm Thursday at the Lincoln Elementary School in Hibbing.

Chisholm’s Jordan Temple set a ball for the Bluestreaks.

Hibbing’s Bella Scaia bumps a ball during the Bluejackets match with Chisholm Thursday in Hibbing.

HIBBING — It was only one set, but the Hibbing High School volleyball team set the tone early.

The Bluejackets blitzed Chisholm in set one and even though they fell in set two, Hibbing was able to hold off all Bluestreak rallies en route to a 3-1, 25-10, 17-25, 25-20, 25-21 victory Thursday at the Lincoln Elementary School Gymnasium.

The Bluejackets jumped all over Chisholm in that first set, winning by 15.

“We played so well in that first set,” Hibbing head coach Lauren Peterson said. “We came out swinging right away, serving right away and we caught them on their heels a little bit.”

It was a perfect storm as Hibbing played air tight, while the Bluestreaks weren’t on their game.

“We were not mentally prepared for that first set at all,” Chisholm assistant coach Jennie Varda said. “Clearly, we didn’t show up to play volleyball that first set, but we came back in the second strong.

“It was all mental. The fans were a big part of this, both Hibbing and Chisholm. I think that got into our heads a little bit in that first game. In the second game, we settled down and got more into our groove.”

Chisholm did up its game in set two, which caught Hibbing off guard.

“I don’t think we were ready for Chisholm to start hitting at us as hard as they did,” Peterson said. “We said it in the huddle, and they all knew what was going to happen heading into that set. I don’t think they knew how hard it was going to be.”

With all of the momentum heading into Set 3. It didn’t materialize in that game.

The Bluejackets took a 16-10, then both teams traded points to give Hibbing that 2-1 lead.

“We had to change our mentality,” Peterson said. “We still had to expect them to hit hard, but we wanted it just as bad.”

In Set 4, the Bluejackets had a lead throughout most of it, but the Bluestreaks came back to tie it 19-19.

From that point on, Chisholm committed one too many unforced errors, which allowed Hibbing to pull away for the victory.

“We struggled with our passing,” Varda said. “For the whole team, one of our biggest weaknesses is our passing. We can’t get a good set without a halfway decent pass. They had their momentum changing play, and it went from there.

The biggest culprit was serving errors. Both teams missed serves at crucial parts of the final two sets.

“I tell the girls that when they’re serving, that’s their only job,” Varda said. “Focus and get their serve over and in. When they don’t, they’re not focused. They’re concentrating on what they’re going to do after the serve and not getting the serve over the net.”

“You feel like that player isn’t focused,” Peterson said. “It’s like, ‘What’s going on?’ You know it’s not intentional. You have to believe that, but it comes down to focus at that point, but we played well.

“We played together as a team. We let go of the mistakes, and we had the we’re-going-to-finish-this-game mentality.”

AURORA — Brynn Babich scored both the Bluejacket goals as Hibbing/Chisholm upended the Giants on the road Thursday.

Aella White had five saves to post the shutout.

GRAND RAPIDS — The Raiders got 18 kills and six digs from Emma Markovich but it wasn’t enough as the Thunderhawks came away with the sweep by the scores of 25-23, 25-18, 25-23 Thursday at home.