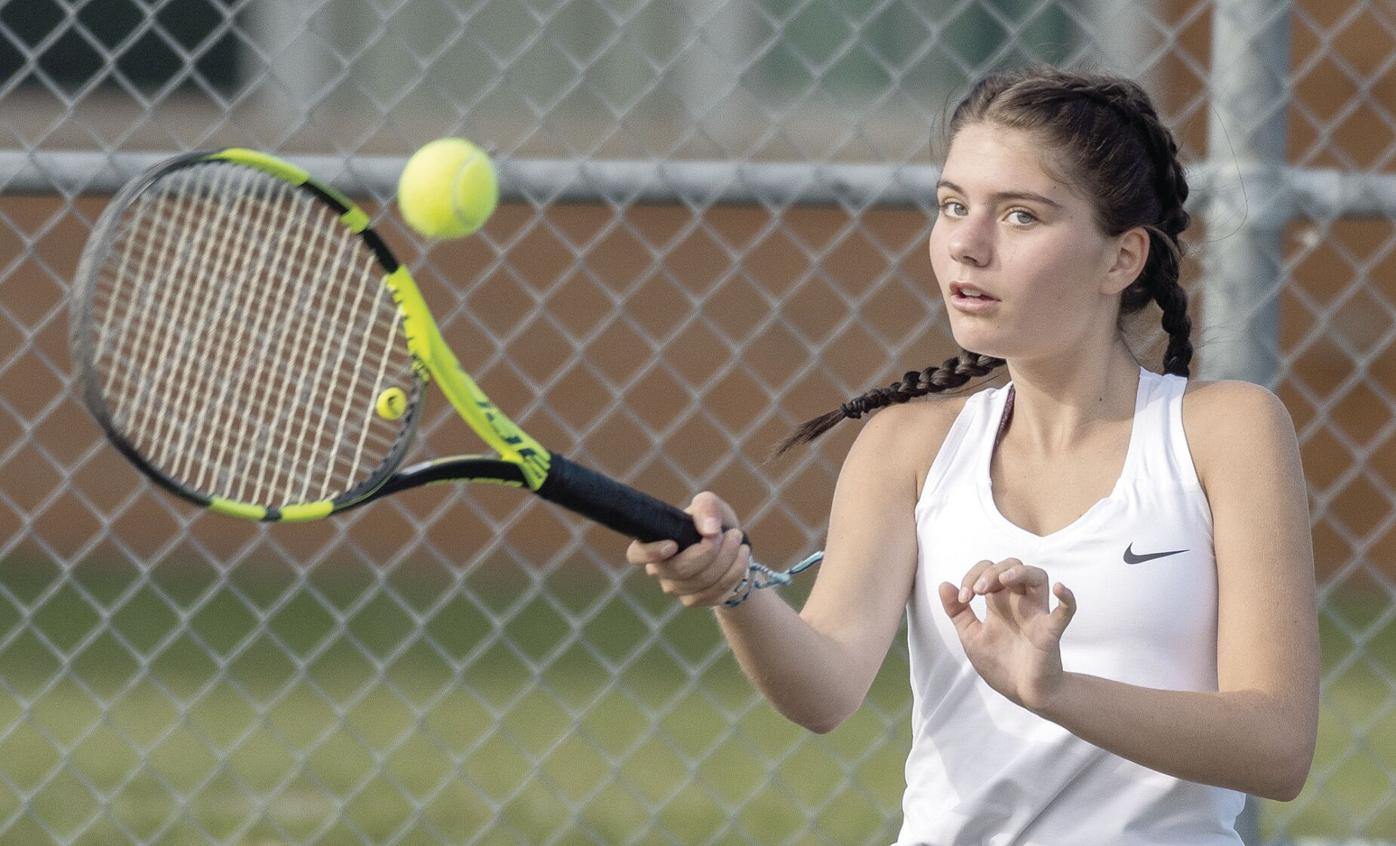 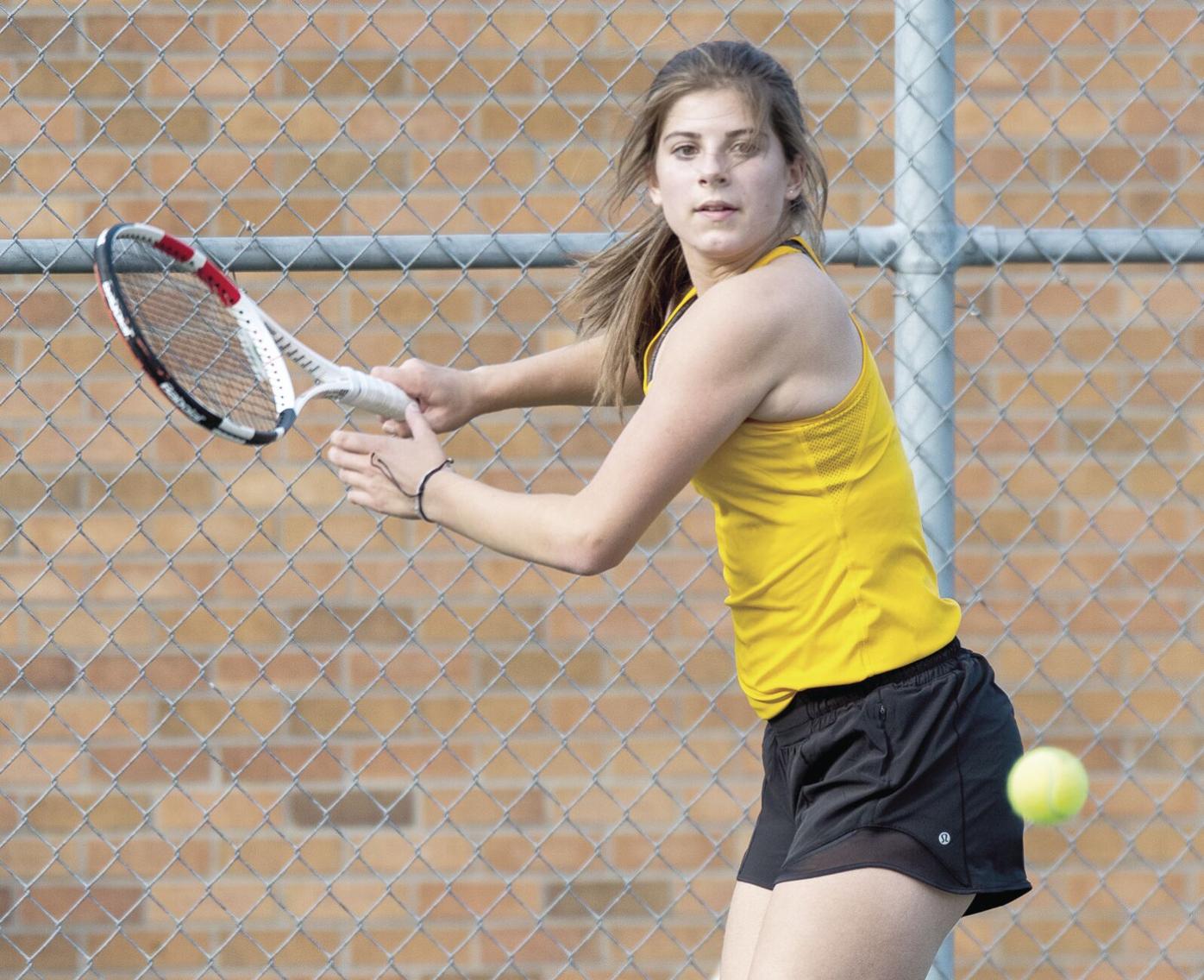 Eveleth-Gilbert’s Lydia Delich winds up for a return during Friday’s match against Hibbing in Hibbing.

Eveleth-Gilbert’s Lydia Delich winds up for a return during Friday’s match against Hibbing in Hibbing.

HIBBING — After a big win over Duluth East earlier this week, was the Hibbing High School girls tennis team primed for a letdown?

If so, Eveleth-Gilbert was the wrong team to have that happen against, but the Bluejackets staved off that letdown and ground out a 5-2 victory over the Golden Bears Friday at the Lincoln Elementary School Courts.

It took three-set victories at first and second doubles for Hibbing to get that win.

“We always grind things out,” Hibbing coach Gary Conda said. “The game isn’t easy at times, and Eveleth played smart. They kept the ball in play, then we got careful. We got scared.”

That was evident in both of the doubles matches even though Sullivan and Rewertz had to overcome a first-set loss to get their win.

Renskers and Valeri had a chance to put their Golden Bears’ duo away in the second, leading 4-3, but Beldo and Grahek won the next three games to send the match into the third set.

“We weren’t aggressive,” Conda said. “We weren’t hitting through the ball. We were babying easy balls, giving them another shot at the ball. You can’t play scared. The more nervous they got, the softer they hit the ball.

“They managed to get the win. They struggled through it. That’s a good sign.”

“Mercedes is becoming a backboard,” Conda said. “She can move the ball around. She doesn’t hit it hard, but she makes a person work for every-single point. She’s going to get a reputation, and nobody is going to want to play her.

“Claire is strong. She comes up with a phenomenal shot here-and-there. She has a little more power and does more with the ball. She might make more errors, but when she gets steadier, she’s going to be a force.”

Lydia Delich would sweep Megan Bussey at first singles, 6-0, 6-0, and Julia Lindseth beat Annika Lundell 6-3, 6-3 at second doubles for Eveleth-Gilbert, which was only playing its second match of the season.

The Golden Bears got bit by the COVID-19 bug, and they had to sit out the past two weeks in quarantine.

“We’re just getting back out on the courts,” Eveleth-Gilbert coach Dean Edstrom said. “We haven’t hit a lot of balls in the last couple of weeks. Every day we’re getting better and stronger.”

It didn’t look like Eveleth-Gilbert missed a beat as it had ample opportunity to win the match had those doubles teams flipped those scores around.

“Our doubles are coming around,” Edstrom said. “It’s a matter of hitting more balls, and getting that consistency. Once we get the consistency, the rest will come. We need more practice time, but everybody is in the same boat.

“Everybody is going to get better as the season goes on. We have to keep working hard. I was proud of the girls for today. I thought we battled in most of our matches against a tough team. We will continue to get better.”