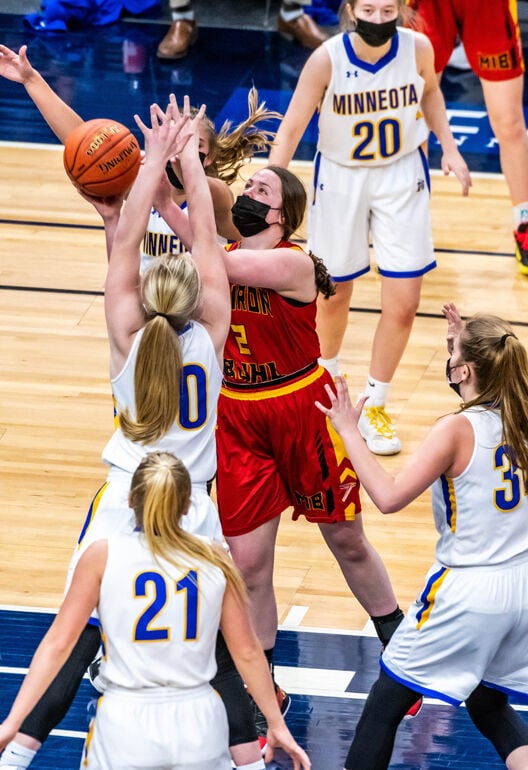 Mountain Iron-Buhl's Jacie Kvas battles Minneota's McKenna Yost as she sinks a bucket in the first half of Tuesday's state semi-final game at Target Center in Minneapolis. 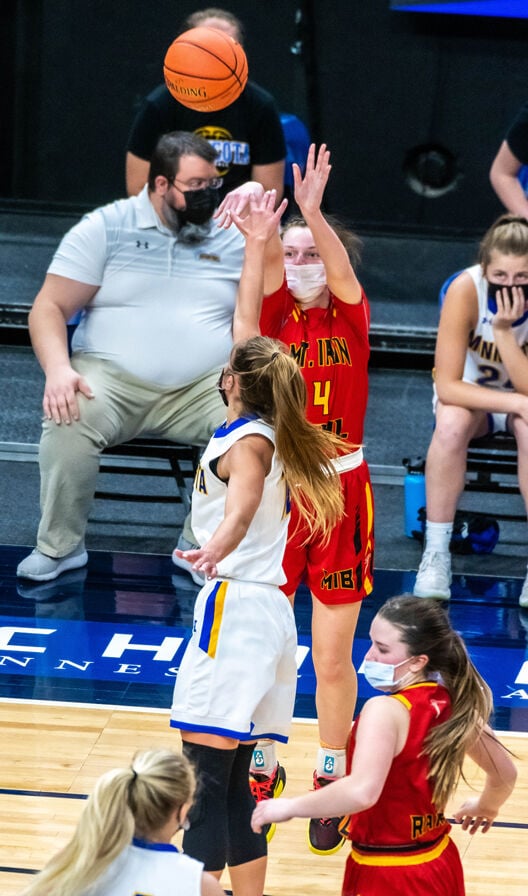 Mountain Iron-Buhl's Jordan Zubich puts up a three point shot during the first half of Tuesday's state semi-final game against Minneota at Target Center in Minneapolis. 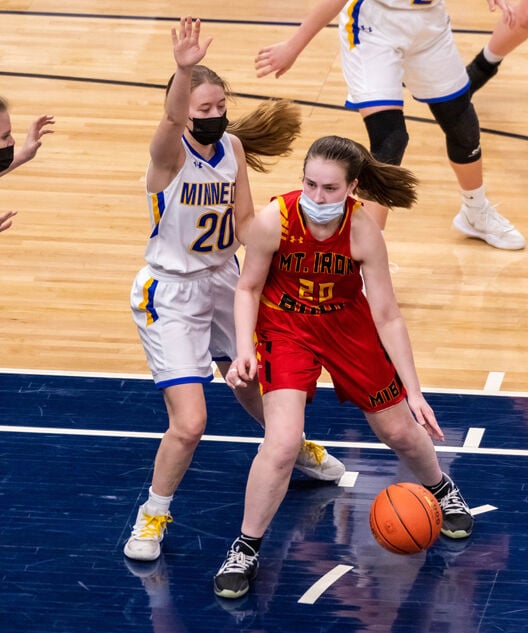 Mountain Iron-Buhl's Ava Butler takes the ball around Minneota's McKenna Yost during the first half of Tuesday's state semi-final game at Target Center in Minneapolis. 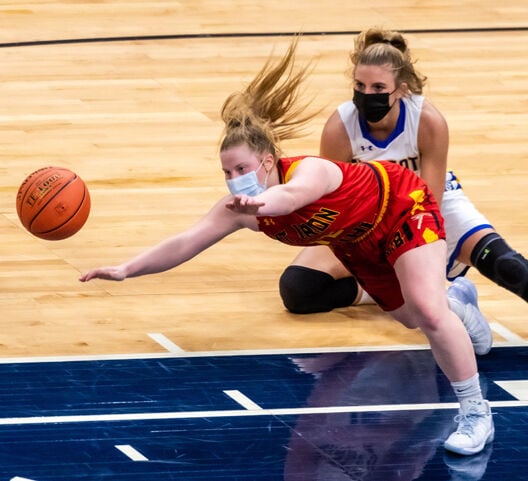 Mountain Iron-Buhl's Sage Ganyo dives after a loose ball during the second half of Tuesday's state semi-final game against Minneota at Target Center in Minneapolis.

Mountain Iron-Buhl's Jacie Kvas battles Minneota's McKenna Yost as she sinks a bucket in the first half of Tuesday's state semi-final game at Target Center in Minneapolis.

Mountain Iron-Buhl's Jordan Zubich puts up a three point shot during the first half of Tuesday's state semi-final game against Minneota at Target Center in Minneapolis.

Mountain Iron-Buhl's Ava Butler takes the ball around Minneota's McKenna Yost during the first half of Tuesday's state semi-final game at Target Center in Minneapolis.

Mountain Iron-Buhl's Sage Ganyo dives after a loose ball during the second half of Tuesday's state semi-final game against Minneota at Target Center in Minneapolis.

MINNEAPOLIS — There was heartbreak at Target Center Tuesday as a late free throw lifted Minneota over Mountain Iron-Buhl, 54-53, in the State Class A Girls’ Basketball Tournament semifinals.

The Rangers held a 53-47 lead with about 2 and a half minutes to play, but the Vikings (24-0) scored the last seven points to eke out the win.

That included Abby Hennen making one of two free throws with 2.1 seconds to go for the 54-53 advantage. MI-B’s Jordan Zubich got off a desperation heave at the buzzer, but it was off the mark, which put an end to the Rangers’ season with a record of 19-5.

“We gave it our all. The girls did everything we asked of them,’’ head coach Jeff Buffetta said after the game.

The game plan included keeping the tempo a bit slower against an athletic Minneota team that is good in transition.

“We knew that we had to keep the game somewhat down score wise,’’ he said, because of the Vikings’ transition abilities.

The Rangers got off to a good start as Lauren Maki and Hali Savela each knocked down 3-pointers and Sage Ganyo added a field goal for an 8-5 lead.

The 2019 state champion Minneota was a bit cold from the field, while MI-B extended its lead to 13-6 on a 3-pointer by Jordan Zubich and a nice baseline move by Lauren Maki.

Natalee Rolbiecki brought Minneota back early as she scored six of her 18 points to give her squad a 16-15 lead. The Vikings continued a 10-2 run and built their lead to 24-19, which was their biggest advantage of the contest.

However, the Rangers responded with a 10-2 run of their own. Ava Butler started things off with a free throw and a 3-pointer before Ganyo converted a 3-point play the old-fashioned way. Zubich added a singleton and before Jacie Kvas hit a bank shot high off the glass to make it 29-26 at the break.

Buffetta was happy with how his squad played in the first half and kept to the game plan of being patient on offense.

“We were stressing good solid possessions. We had to pick our spots where we wanted to be aggressive,’’ the coach added. “Once we got through the (Minneota) pressure, we got a good opportunity each time. I thought we moved the ball well and the girls were able to step up and make plays.’’

The second half was a heavyweight slugfest with neither team leading by more than six points.

All-State players Hennen and Rolbiecki helped Minneota take a 33-29 lead before Zubich got hot to help the Rangers go up 41-39 with 11 minutes to play.

The back-and-forth contest went in favor of Hennen and the Vikings, who grabbed a 45-41 lead halfway through the final stanza. Butler, Ganyo, Zubich and Maki each scored down the stretch for a 53-47 lead.

But Hennen added a 3-pointer and Abby Rost converted a fast break layup to cut MI-B’s lead to 53-52.

A debated and reviewed call that said a loose ball went off MI-B gave the back to Minneota and Rolbiecki tied things up with a free throw with 49.3 seconds to go.

The Rangers proceeded to miss their next shot and Hennen drove to the basket and got fouled with 2.1 seconds to play. She calmly went to the line and made the second free throw, which denied MI-B a trip to the Class A championship game.

After seeing the lead slip away, Buffetta said the gave got physical and aggressive at the end. His team still made good choices, but they weren’t quite able to make the plays when they were needed.

Asked about the debated call late in the game, he said, he “thought it was off them.’’ He added the referees probably had a better look at it, though.

“We had a couple opportunities go off our hands in the last couple minutes,’’ Buffetta added, even though “we were in the right spot with the chance to make the plays.’’

He added the Minneota press “rattled’’ his team a couple of times, which proved to be the difference overall.

Buffetta was proud of his girls after such a close loss.

“It’s tough. They executed what we wanted them to execute.’’

He added that the game was “a great learning moment for them.’’ He now hopes they want to take it another step in the future after making the most of a very different season that was affected by the coronavirus.

It’s a distinct possibility for the team to take the next step considering they don’t graduate any seniors.

“Now that it’s over you have to be excited with what we return.’’

The Rangers were paced by Zubich with 14 points and Ava Butler with 12 points.