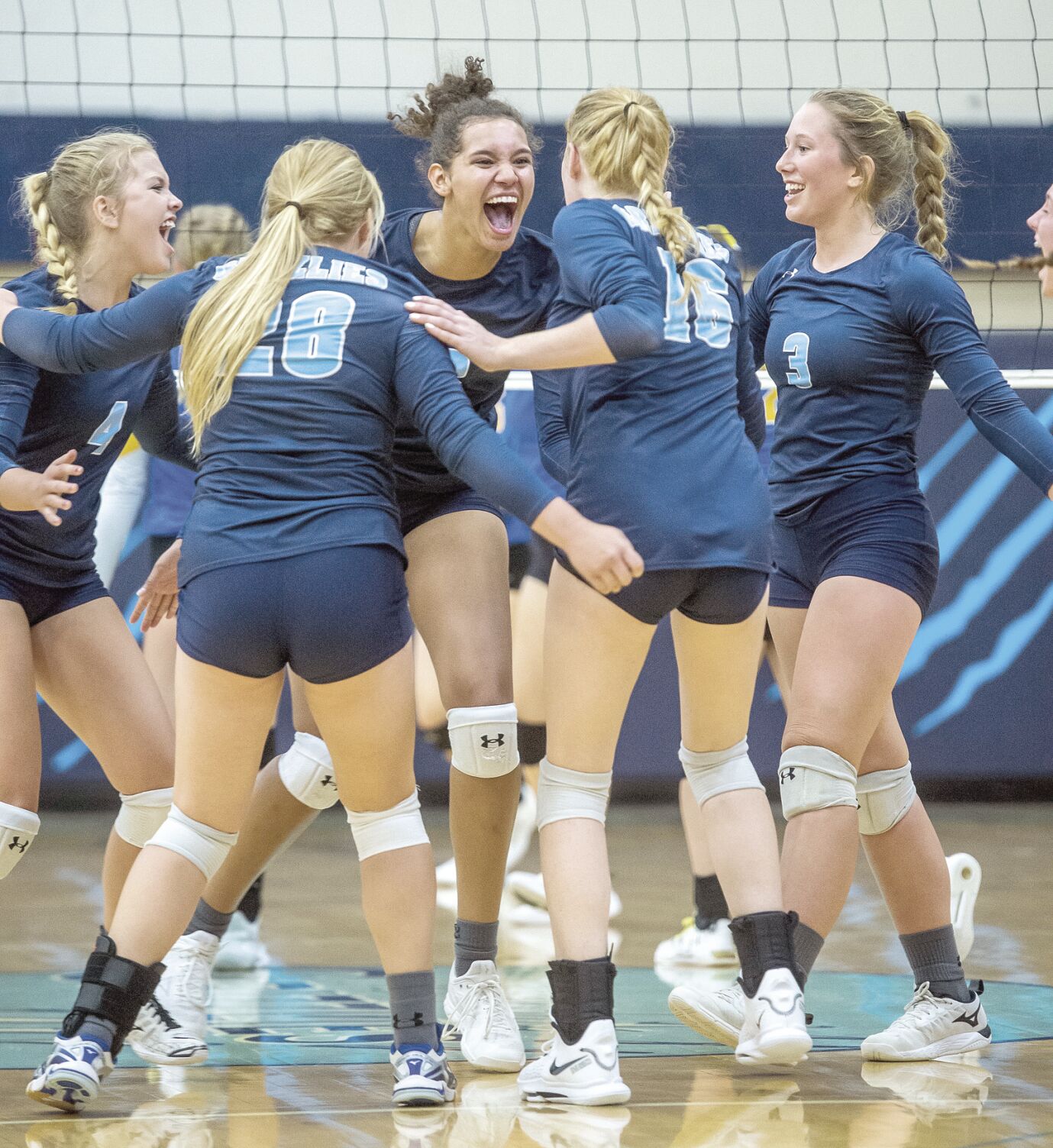 North Woods players celebrate after a kill early in the second game of Monday night's match against Deer River in Cook. 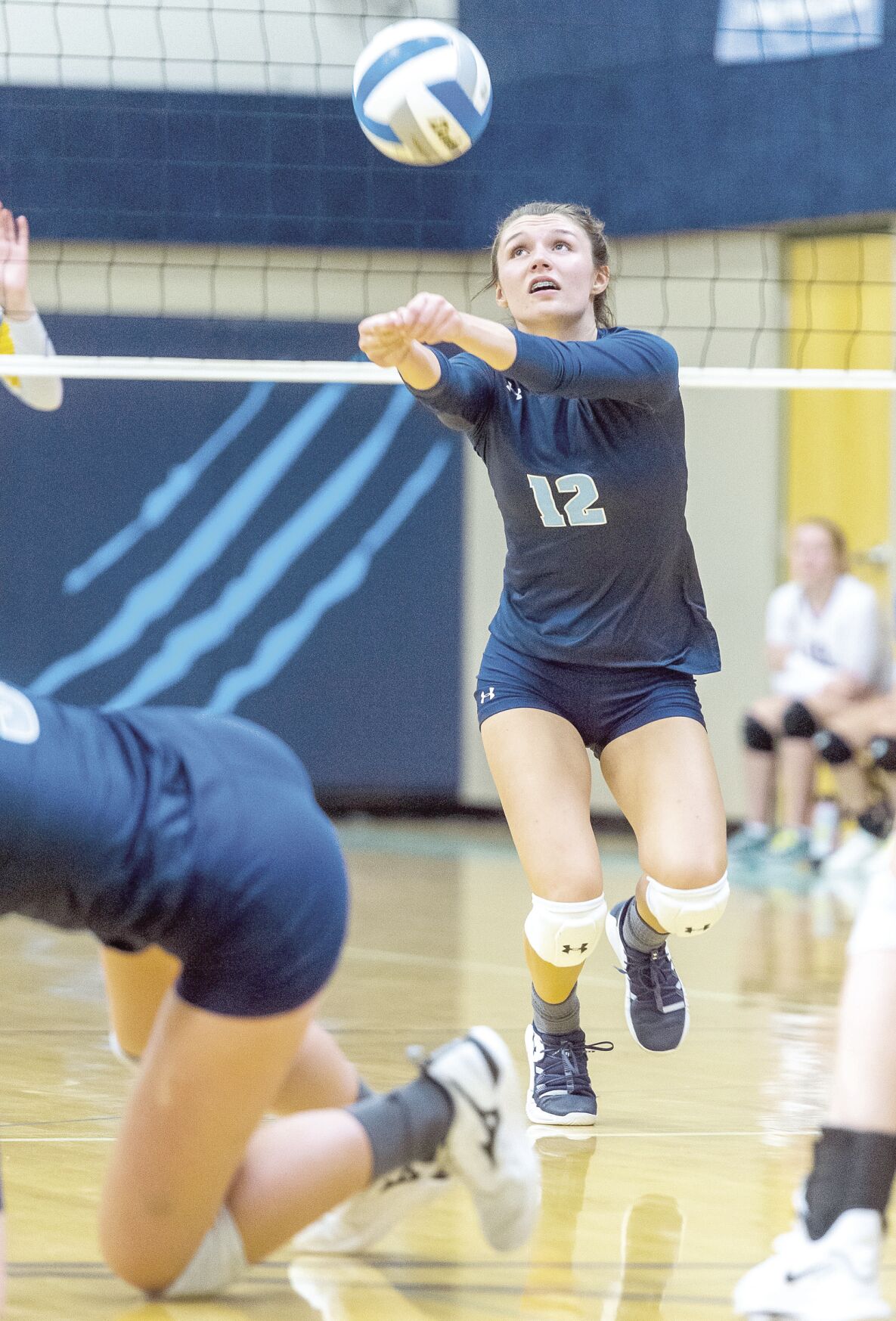 North Woods players celebrate after a kill early in the second game of Monday night's match against Deer River in Cook.

COOK — The North Woods volleyball team took care of business on Monday night against a Deer River team that wasn’t going to quit.

“I really did see some good things out there tonight,” North Woods coach Kandi Olson said. “Some of the things that we have been working on, like net communication, really came through for us.”

The thing that really stood out for the Grizzlies was the serving of senior Morgan Burnett was huge. Burnett collected 16 Ace serves with her jump serve.

“She is very tough out there,” Olson said. “She really shows her leadership out there.”

Game one was a back and forth affair. Neither team had anything bigger than a three point lead until Burnett took over serving when the game was 19-19.

Three straight aces from the senior made it a 22-19 game. Another pair of Grizzlies points made it a four point game and another ace put the game out of reach.

A Warriors error gave North Woods the game and a 1-0 lead in the match.

North Woods raced out to a 21-9 lead in game 2 with Hannah Kinsey taking charge at the net.

The junior collected a handful of kills while Burnett continued her ace parade.

But, the Deer River squad was not going to just give up. The Warriors went on a 7-0 run, forcing Olson to take a time out.

Deer River collected another point after the time out but a Kinsey kill stopped the run and put the Grizzlies up, 22-17. A Taylor Peck Kill later made it a 23-19 game.

Another Deer River point forced Olson to take her final time out. The Warriors collected another point but the Grizzlies closed things out shortly after to take the 2-0 lead.

Game three was a back and forth affair until Deer River broke things open. North Woods found themselves with a 10-9 lead but the Warriors went on a 7-0 run to grab the 16-10 lead.

The Grizzlies were not going to just hand the game over as they tried to keep things close. A pair of points for them cut the deficit to four, 16-12.

With the Warriors leading 17-12, a Kinsey tip made it 17-13 and another Burnett ace made it a three point game.

Another Burnett Ace forced Warriors coach Leigh Ayers to take a time out.

The Grizzlies picked up another point after the time out but that would be as close as they could get as the Warriors coasted to the seven point win.

“We didn’t give up out there like they could have,” Olson said. “We fought but they just had a little more that game.”

Game four was all Grizzlies.

They raced out to a 11-3 early game lead after a couple of Kinsey kills and a Skyler Yernatich ace serve got them going.

The Warriors did what they could but the Grizzlies net play was just too much.

“That is something that we are working on is our net communication,” Olson said. “We had a lot of players play tonight and our bench is capable and ready to play.”

Nevaeh Evans led the way for the Warriors with 11 kills, while Peck added 10. Grace Bergland had 29 set assists.

North Woods will be in action again this weekend at the Hill City tournament.

Lindsey Baribeau led the way in kills for the Giants with nine. She added two aces and a block to her stat line.