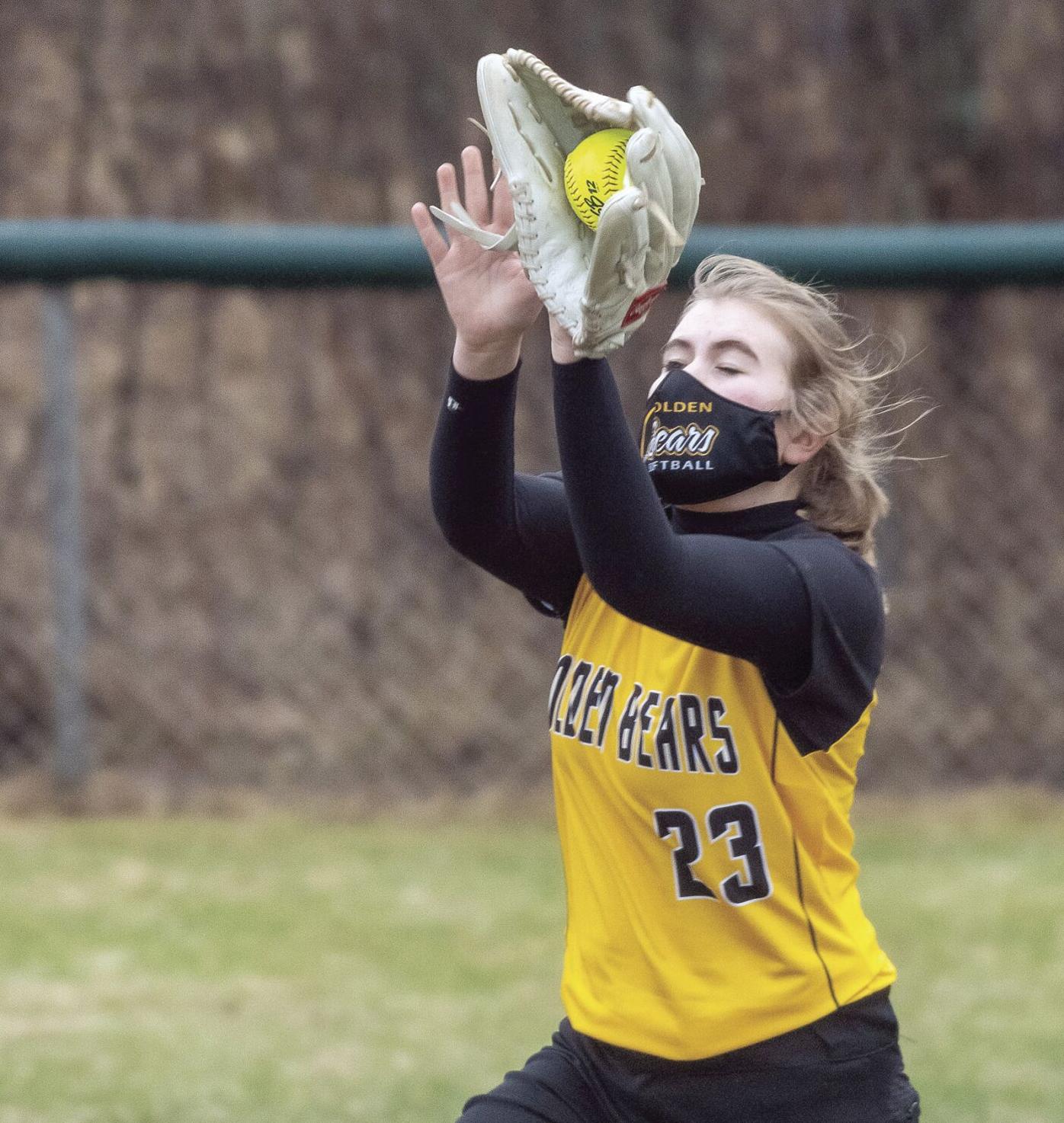 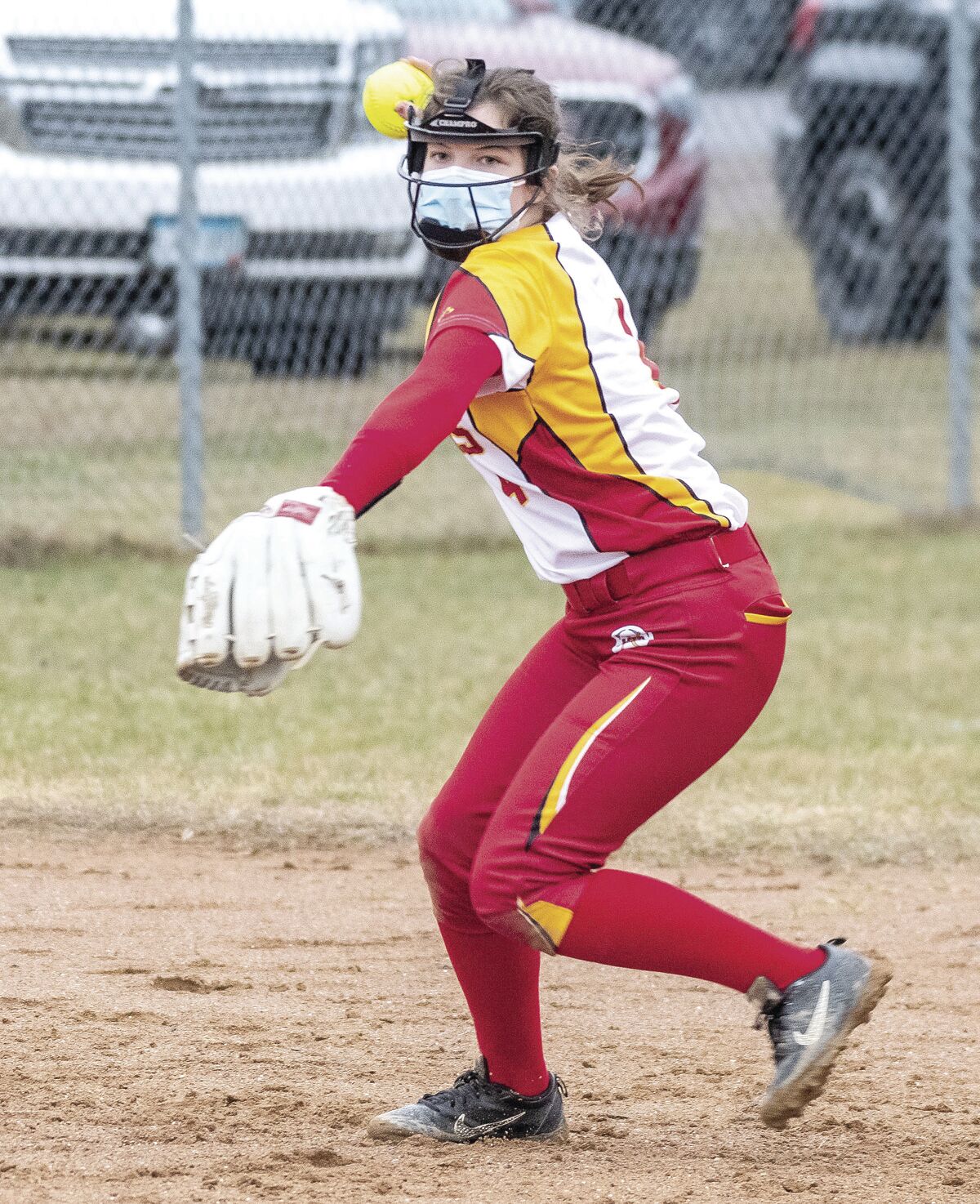 Mountain Iron-Buhl shortstop Desi Milton fires across the diamond to first during Thursday's game against Eveleth-Gilbert in Eveleth. 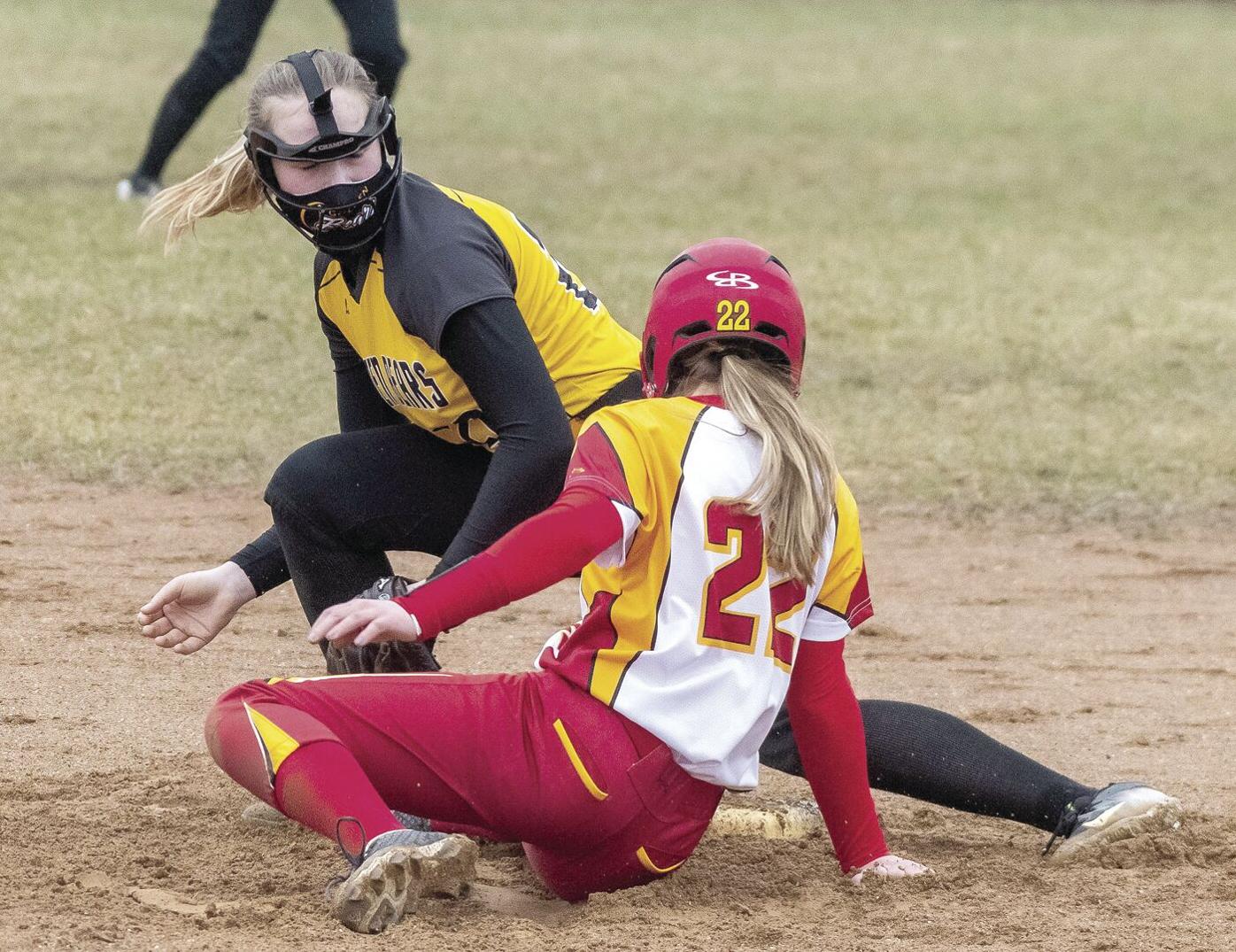 Mountain Iron-Buhl's Paris Pontinen beats the tag from Eveleth-Gilbert's Ava Thompson for a stolen base during Thursday's game in Eveleth.

Mountain Iron-Buhl shortstop Desi Milton fires across the diamond to first during Thursday's game against Eveleth-Gilbert in Eveleth.

Mountain Iron-Buhl's Paris Pontinen beats the tag from Eveleth-Gilbert's Ava Thompson for a stolen base during Thursday's game in Eveleth.

EVELETH — After nearly two years off the high school softball diamond, Eveleth-Gilbert put together a solid effort Thursday to knock off Mountain Iron-Buhl, 13-3, in five innings.

The Bears got a strong complete game outing from starting pitcher Lydia Delich and the team took advantage of a five-run second inning to score the win.

“I can’t complain at all for not being on the field for over a year,’’ head coach Paula (Madden) Dundas said of the coronavirus cancelling last year’s season. “My juniors and seniors really stepped up tonight. I was very impressed with how they — with only seven days of practice — swung the bat.’’

The young Rangers team got on the board first, though, as they took a 2-0 lead in the opening frame. MI-B got things started when leadoff hitter Maleah Milton was hit by a pitch and Desi Milton smacked an RBI triple to right field to make it 1-0. Two batters later Elle Otto stepped up to the plate and knocked in Desi Milton for the 2-0 advantage.

“It was nice to get a lead and it was good for the girls,’’ MI-B head coach Jesse White said. “They were excited about that.’’

The Golden Bears got their first run in the bottom of the first after Afton Roberts lead off with a single and Ava Thompson’s RBI single to right cut the deficit in half at 2-1.

Eveleth-Gilbert caught fire in the top half of the second with three straight strikeouts for Delich, which seemed to change the momentum at the rain-soaked field.

Subsequently, Cece Schneider walked three straight, which led to a 4-2 E-G lead. Emily Kemp closed out the Bears scoring with a 2-RBI single to center field, which extended the E-G advantage to 6-2.

The Rangers got back on the board in the top of the fifth with a single from Aaliyah Barfield, who advanced to second on an errant E-G throw. Maleah Milton’s RBI ground out subsequently made it 9-3.

Eveleth-Gilbert was hot again in the bottom of the fifth with four more runs to close out the 13-3 victory via the 10-run rule.

Delich got things started with a triple to right before Thompson knocked in a run with an RBI single. Thyen was then walked to eventually put runners at second and third with Emily Kemp at the plate. Kemp came through with a single to make it 11-3 and Lauren Lautigar followed that up with an RBI single to left for a 12-3 advantage.

Luzovich ended the game with a sacrifice fly that made it 13-3.

Dundas was impressed with how well Delich threw after working on her pitching before the season started.

Thyen “did a great job anchoring us behind the plate’’ and Roberts lead the outfielders.

“Those guys really did a good job of anchoring us tonight.’’

“We’re just pretty happy to be back on the field’’ after missing out on last season, Dundas added. The girls have been working hard in practice, she said, and “they’re coming back with something to prove.’’

Despite the loss, White was happy with his team’s hitting against a quality pitcher like Delich. “I loved their hitting. They were aggressive. Delich is a great pitcher so they should be proud of that. We just have to work on our fundamentals.’’

At Eveleth, the Eveleth-Gilbert baseball team cruised to a 16-0, five inning win in their season opener over Deer River.

A 14-run third inning set things in motion for the Golden Bears with Jake Sickel, Carter Flannigan, Griffin Dosan, Carter Mavec and Andrew Torrel batting in runs in the frame.

Flannigan was the winning pitcher for Eveleth-Gilbert, pitching four innings of shutout ball while striking out nine and surrendering just two hits. Sickel came in for the final inning and gave up nothing while etching three Ks.

Other notable stats for Eveleth-Gilbert include a 2-2 day at the plate for Will Bittmann and five runners stealing at least two bases with Hunter Pederson leading the way with three.

Eveleth-Gilbert will hit the road on Monday when they take on Cloquet.