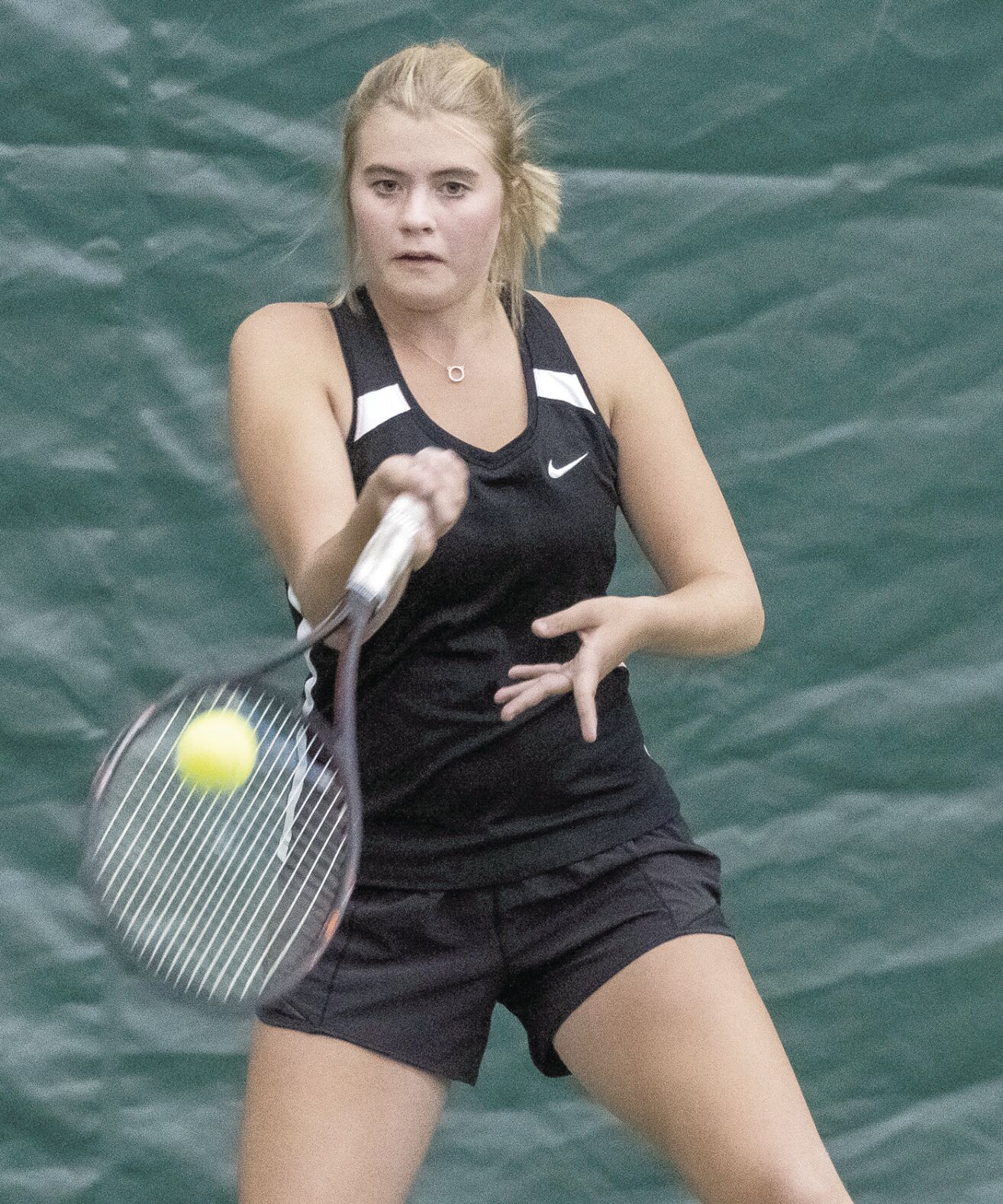 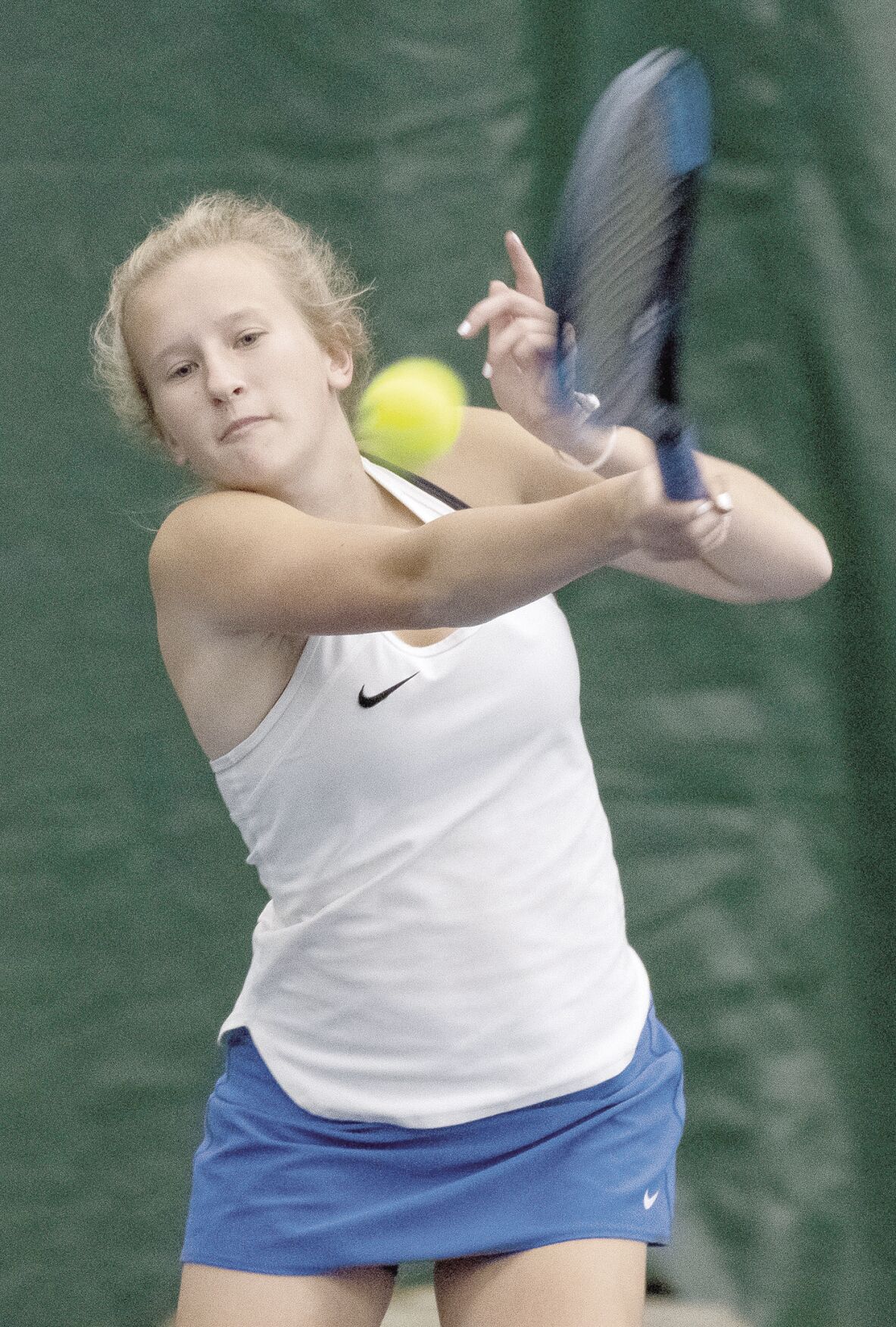 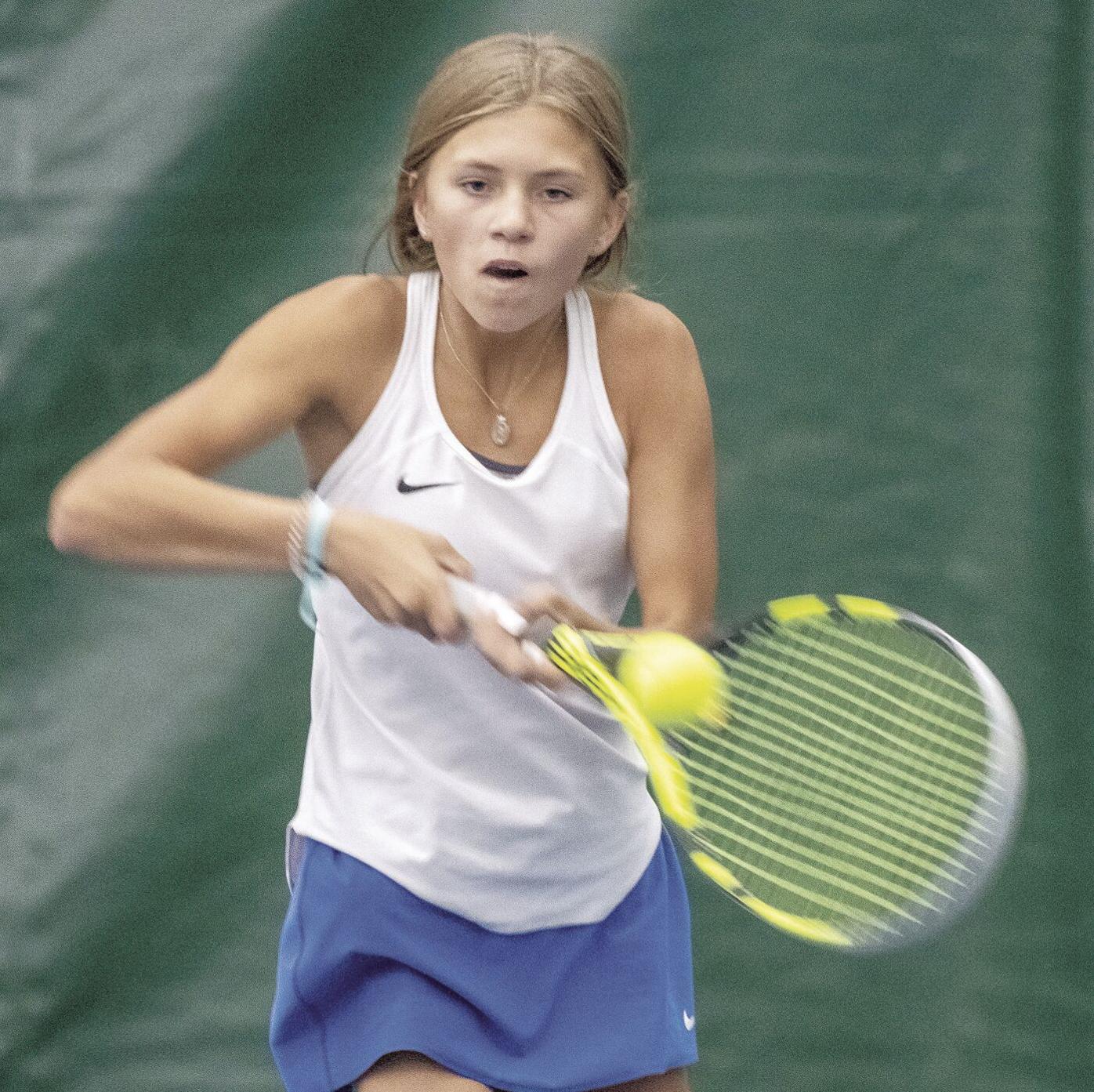 VIRGINIA — The long-lasting rivalry between Eveleth-Gilbert and Virginia was reignited Tuesday as the Golden Bears and Blue Devils faced off in one of the tightest tennis matches of the season.

In the end, it was Eveleth-Gilbert that came out on top, defeating their longtime rivals and future teammates 4-3 at the Virginia indoor tennis center.

The Golden Bears grabbed wins at first, second and third singles as well as a point at the No. 1 doubles spot to secure the win. The Blue Devils picked up the other three points at fourth singles and second and third doubles.

At the top singles spot, E-G’s Lydia Delich and Virginia’s Ava Fink battled through a close first set with Delich taking it 6-4. In the second, the Bears junior wouldn’t be defeated as she cruised 6-1 to close out the match.

At second singles, Katelyn Torrel followed a similar trajectory for the Bears, taking the first set 7-5 over Virginia’s Anna Fink. In the second set, Torrel cruised to the set win 6-1 to finish the match.

At No. 3 singles, E-G’s Julia Lindseth played a solid all-court game to come out on top over the Devils’ Ella Lamppa, 6-1, 6-3. Finally, at fourth singles, Virginia’s Alli Fink got the Devils on the board in singles with a 6-1, 6-1 win over E-G’s Mayme Scott.

In doubles, the Golden Bear duo of Anna Beaudette and Mylee Young proved to be too much for Virginia’s top pair of Paige Maki and Ava Seppala, with Beaudette and Young dispatching them in straight sets 6-3, 6-2.

At No. 2 doubles, Virginia’s Mariele Paulsen and Abby Kramer were locked into two close sets with the Bears’ Alyssa Grahek and Ayla Troutwine, but came away winners in the end 6-4, 6-4.

Finally at third singles, it was the Virginia duo of Theresa Anderson and Sydney Spelts that came out on top, taking down E-G’s Alex Flannigan and Hanna Beldo, 7-6, 6-2.

Falling the night before in a 4-3 match with Duluth Marshall, picking up the win against the Blue Devils was important if the Bears wanted to bounce back. Head coach Jessica Kralich and assistant coach Katie Troutwine said it was an emotional, well earned match for their team.

“We’re glad we found a way to bounce back,” Troutwine said. “We had a tough one with Marshall yesterday and the girls refocused and got ready for today.”

“I think we were feeling just about every emotion,” Kralich added. “We were excited and we were nervous. But we were ready. It’s a big win for us and a huge confidence booster for our kids.”

With the two teams set to become one next year, Kralich said it was important for her players to get into a competitive mindset even though the two teams are more friends as opposed to rivals.

“We had to talk to them as coaches and tell them that this is still a competition. Even though we’re friends, we have to keep our head in the game and play tough and I think they did that. Our girls gave it their all today.”

Settling for the close loss, Virginia head coach Kortney Rosati and assistant coach Jill Westerbur were proud of how well the Devils battled and look forward to the improvements they can make after a tough match with the Bears.

“Overall, we’re really proud of them,” Rosati said. “Looking at this entire season, it’s clear they’ve come a long way and we saw some really good things today but also some things we need to work on. We’ll take those things and bring it to practice and get better.

“We have a lot of room for growth,” Westerbur added. “They’re excited and they have a fire underneath them now to get better. They know this isn’t their peak. They’re trending upwards and ready to keep working at it.”

The Bears grabbed most of their points from the top of the lineup, a reassuring sign for the most experienced members of the team.

“They’ve made a lot of gains and improvements this season as our top players,” Kralich said. “They’ve shown us at practice that they can continue to learn and apply what we do there into their matches.”

Conversely, the Devils earned points from the lower half of the lineup, something their coaches said makes the entire team better.

“It’s exciting to see the younger ones stepping up,” Westerbur said. “They’re playing well and it’s nice to have that solid base to build upon.”

“They’re consistently showing us they want to be here and they want to hang on to those varsity spots,” Rosati added. “We know every girl on this team is going to keep working hard and progressing upwards.”

The two teams will battle again next week in what is potentially the last meeting between the two teams. With the future of Rock Ridge tennis looking strong, it’s hard not to be pleased with the match no matter the outcome.

“Jill and I played against each other as part of this rivalry and now we’re coaching in it together,” Rosati said. “It’s nice that the girls are coming together but even as that’s happening, both teams want the win so bad. The potential of what we could become with strong players coming from both sides is very exciting.”

At Duluth, the Bear suffered their first loss of the season on Monday, falling to the Marshall HIlltoppers 4-3.

Eveleth-GIlbert grabbed all three of their points from the top of the lineup. At first doubles, Anna Beaudette and Julia Lindseth defeated Eva Etter and Anna Koski 6-4,6-3.

The Bears fell at third and fourth singles as well and second and third doubles to tilt the match in favor of Duluth Marshall.