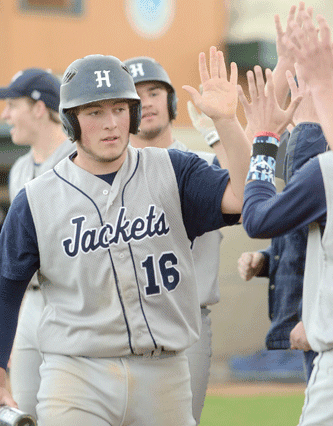 Hibbing’s Anthony Kanipes (16) and Logan Radovich (behind) get high-fives after scoring the go-ahead runs in the fifth inning of their game against Monday at Al Nyberg Field. 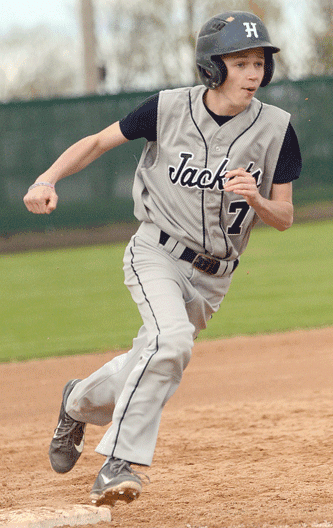 Hibbing’s Austen Kolden rounds third and heads for home as he scored in the during the fourth inning of the Bluejackets game with Esko Monday at Al Nyberg Field. 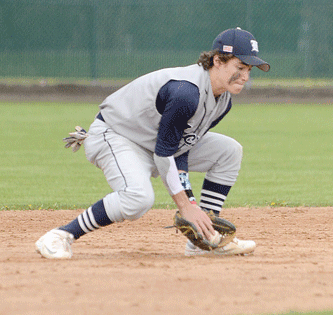 Hibbing shortstop Riley Versich fields a ground ball and throws out Esko’s Reid Davidson during the fourth inning of their game Friday in Hibbing.

Hibbing’s Anthony Kanipes (16) and Logan Radovich (behind) get high-fives after scoring the go-ahead runs in the fifth inning of their game against Monday at Al Nyberg Field.

Hibbing’s Austen Kolden rounds third and heads for home as he scored in the during the fourth inning of the Bluejackets game with Esko Monday at Al Nyberg Field.

Hibbing shortstop Riley Versich fields a ground ball and throws out Esko’s Reid Davidson during the fourth inning of their game Friday in Hibbing.

HIBBING — When the Hibbing High School baseball team needed a big lift, the Bluejackets got it from one class — the seniors.

Trevor Erickson lined a three-run double into the left-field corner in the bottom of the fifth inning leading Hibbing to a 7-4 victory over Esko Monday at Al Nyberg Field.

The Bluejackets also rallied from a two-run deficit in the fourth inning, scoring three times, this time getting a bases-loaded walk to Erickson, then a two-run single by junior Andy Mickelson to take a 4-3 lead.

“The expectations are obviously that they’ve been around the block enough and been in tough situations,” Hibbing coach Jay Wetzel said. “This is a game with a good Class AA opponent.

“It was a preview of what playoff baseball is going to look like. We saw a good arm against them, and Trevor stepped up when we needed him to. He put a good swing on the ball.”

Zach DeBoom put his bat on the ball in the first inning, rapping a run-scoring double, but the Eskomos tallied once in the third on an RBI single by Reid Davidson.

Esko then took a 3-1 lead in the fourth when Ryan Nelson’s fly ball to right-center field was misplayed for an error, allowing those two runs to score.

“It was a ball in the air that we thought maybe we could have gotten to,” Wetzel said. “It’s tough when you’re giving them runs that they didn’t necessarily earn.

“We came in with our heads down a little bit, but we had a quick conversation with them.”

“We told them they had four more at bats for ourselves so keep your chins up go after it,” Wetzel said. “The kids did a good of responding there.”

That response was three runs in the bottom of the fourth.

Anthony Kanipes singled, then with one out, Logan Radovich walked. Travis Carruth singled to load the bases, then Erickson got his RBI walk.

Mickelson followed with his two-run single to give Hibbing a 4-3 lead.

“That was huge,” Wetzel said. “They definitely the momentum when they took the lead, but we had some good, patient at bats. We worked their pitcher. We put the pressure on them.”

The Bluejackets started the fifth inning off on the right foot as Jaiman Lamphere singled, then Kanipes hit a towering fly ball to left-center field.

Lamphere was waived home, but the Eskomos’ relay to the plate was in time to keep Lamphere from scoring.

“They had a good arm on the hill, so we thought we’d force them to make plays,” Wetzel said. “Their shortstop did. He made a throw from left field, right on money to home plate.

“You tip your hat to them. The good news — our base runners were on the ball there. We put ourselves into scoring position on that play as well. We kept ourselves in good positions to score.”

Esko starting pitcher Cole Litsey struck out the next hitter, but another senior, Radovich, singled, then Carruth walked to load the bases.

Erickson came up and lined it down the left-field line and it rolled to the fence, allowing Kanipes, Radovich and courtesy runner Austen Kolden to score easily.

“The key to being in those difficult, high-pressured situations is to remain calm and stay focused,” Wetzel said. “He did his job up there.”

Hibbing starting pitcher Carruth then had to be at his best in the sixth inning to keep that lead.

Quinn Fischer led off with a single, then a walk and sacrifice bunt put runners on second and third with one out.

Carruth bore down and got the next hitter to foul out, then he struck out the next batter to end the threat.

“Travis did a great job on the hill battling,” Wetzel said. “In every inning, he seemed to have something going on out there, and we were able to minimize it.

“He had to make some really big pitches. With Emanuel looming in the background there, you want to make sure we face him with little or no opportunity to drive runs in. That’s what happened there.”

Kanipes came in with one out in the seventh and walked a batter, but he got out of the inning with a fielder’s choice ground ball and fly out to get the save.

“This was a good test for us, to see a quality team like Esko,” Wetzel said. “We needed to face adversity. They hit the ball well. They had multiple situations where they could have cracked it open even more.

“We made some plays.”

Kanipes was the only Bluejacket hitter to have two hits.

Fischer and Tyler Peter had two hits for the Eskomos.

KEEWATIN — Aubrey Nelson tossed a five-inning two-hitter as the Spartans downed the Timberwolves by the 10-run rule Monday at Peter Filippi Field.

Joy LaBine had three hits and two RBI to pace Nashwauk-Keewatin. Hanna Oles had a double and triple and four RBI; Kelly Kukkonen Stacie Lokken both had two hits; and Cassie Holmbeck had two RBI.

CHERRY — Jake Mayry had three hits and two RBI as the Tigers beat the Vikings at home Monday.

Tim Clement had two hits for the Tigers, including a double.

Logan Maish took the loss, tossing 5 1/3 innings of seven-hit ball. He struck out two and walked three. Darian Erickson finished up with 2/3 of an inning.

Gary Giombetti can be reached at ggiombetti@hibbingdailytribune.net.