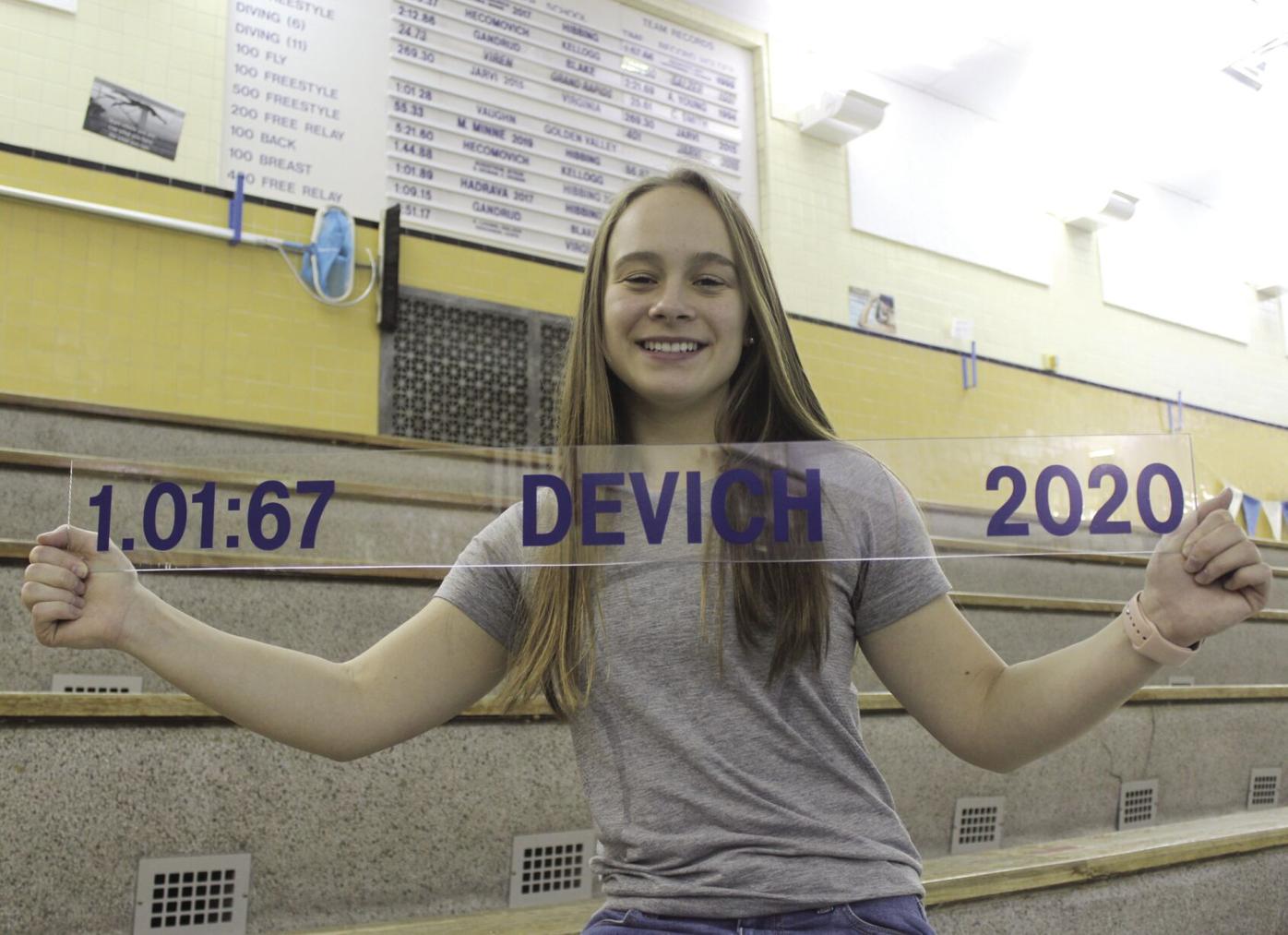 Blue Devils swimmer Lauryn Devich holds the plexiglass tile that was made in honor of her team record in the 100 butterfly. The record was 33 years old. 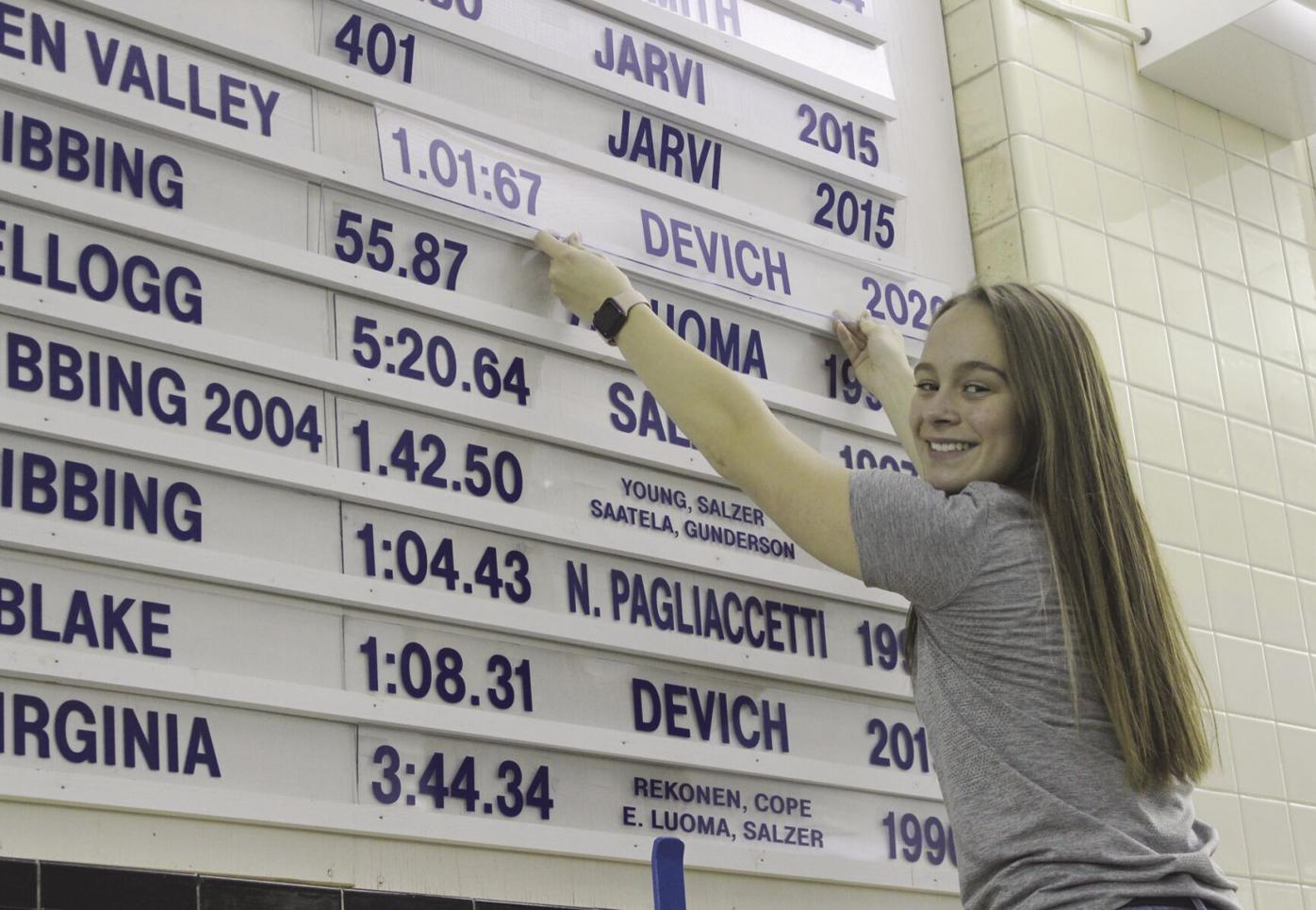 Virginia senior Lauryn Devich puts up her 100 butterfly team record on the Virginia pool record board.

Blue Devils swimmer Lauryn Devich holds the plexiglass tile that was made in honor of her team record in the 100 butterfly. The record was 33 years old.

Virginia senior Lauryn Devich puts up her 100 butterfly team record on the Virginia pool record board.

With that in mind, the Virginia swimmer was determined to make a mark at the 2020 section finals.

She did just that by winning the 100 butterfly and 100 breaststroke section championships. The latter came with a time of 108.66, which broke a Hibbing pool record from 2008.

“Sections were in Hibbing last year and last year sections didn’t really go in my favor. I had an incident and I cut my finger on the block. I sliced my knuckle open. That set my whole day off last year. I really wanted the pool record in the 100 breaststroke last year and I didn’t get it because it wasn’t my day at section finals.’’

She came into the 2020 100 breaststroke final as the top seed and had the record in her sights.

She did her part with her pool-record time in her heat, but the 2020 section finals were a different world compared to other years. Due to COVID-19 restrictions, the 7A meet was held at three different locations -- Hibbing, Mesabi East in Aurora and Duluth.

Without all of the other top swimmers in the adjacent lanes, “ I guess you had to keep in mind that there’s people chasing you, so you just have to go.’’

The second seed in the 100 breaststroke was Mesabi East’s Kylie Meyer, who was swimming in Aurora at about the same time.

“So that was kind of weird not swimming next to the second seed but when I have something in my mind, I don’t necessarily need someone there to push me. If I have my mind focused on something like the pool record then I can chase it.’’

Having her parents Nick and Jill in the stands (senior parents were allowed at the meet) gave Devich an extra boost, as well.

“I was so happy and it really helped because in Hibbing they allowed senior parents to spectate. Having my parents there and especially my dad there really helped. My dad is definitely my No. 1 supporter. Having him there was great. He goes crazy when I win. He gets more excited than me. When I win, he thinks that he does too. It’s funny.’’

Especially during her races, “he was yelling. I think it was an emotional day for everybody because it was my last meet and there there was no state tournament.’’

The coronavirus restrictions on fall sports didn’t allow for a state tournament, which was hard to accept for some swimmers.

How hard was it to get motivated with the state meet?

“I was so close last year. I got 10th last year (at state). I worked so hard in the offseason. That was what I was swimming for and then once I found out there was no state, it was really hard to motivate myself.’’

With that in mind, she knew she had to get over that and refocus herself for sections. “I had to realize I want to get this team record in fly and break this pool record for breaststroke. I just had to refocus.’’

It took her a little while to refocus after finding out the day of a meet in International Falls.

“That day I knew I could break the pool record in I. Falls.’’ Her dad told her that day at lunchtime there would be no state tournament in 2020, which basically crushed her dreams, she said.

Devich cried for a while, but soon got back on track “because I have a pool record on the line that I can get in I. Falls. I was able to get over that and I broke the pool record in I. Falls then too.’’

That was just one of her pool records she set in 2020, which helped her get named the Section 7A Swimmer of the Year. In addition to her section titles, Devich helped her team take fourth in the 200 medley relay at sections. She swam the breaststroke portion of the race.

Did that help soften the blow of not having a state tournament?

“It did. It was hard because the ultimate goal was to go down there and medal.’’

2020 would have been special too, considering she qualified for two events after winning breaststroke and butterfly.

“I never swam two events at state before. It’s always been the 100 breaststroke. It would have been really fun to swim two events.’’

Devich is no stranger to state either. She qualified in ninth, 10th and 12th grades after winning the breaststroke at sections and also as a junior with a second place finish.

Despite the coronavirus-impacted 2020 season, Devich is pleased with her swimming accomplishments over the years.

“I’ve had a good swimming career. It’s been really fun.’’

Of course those trips to state stand out.

“Swimming at state was always my favorite. I loved swimming at the (University of Minnesota) Aquatic Center and swimming with all those people. It’s just fun to compete with all the city teams. The energy at state is so different than any other meet up here.’’

“She was a really good coach to have,’’ Devich said. “It was really fun swimming with her this year.’’

With all the COVID restrictions, “she made the best of it’’ and kept the Virginia swimmers motivated.

“Just her hard work’’ led to Devich’s success in 2020, Klovstad said in a telephone interview. “We worked on practices that challenged her more.’’

Devich will miss her lane buddy Hoard after swimming yard after yard together in the Roosevelt Pool. “She definitely keeps me going and I keep her going.’’

Her parents played a key role in her developing into a standout swimmer and accomplishing so much.

“I would never have done any of this without my parents. My dad especially.’’

She remembers finishing 12th in sections as an eighth-grader. “Then he introduced me to weightlifting.’’

She started lifting in her basement, “and then ninth grade year, I won the section.’’

Her father also brought her to the Mesabi Family YMCA so they could work on technique together, took her to private lessons and he also studied breaststroke on her behalf. “My dad learned everything and he coached me and he helped me get better.’’

With all of Devich’s success in the breaststroke, she found a new stroke in 2019, which was the butterfly.

The 17-year-old thought she was going to swim the 200 individual medley as her second event, but then she started swimming the 100 butterfly and won at True Team last year.

“That made me think that might be my second event. I really liked it.’’ ... “It mixed things up because I was always swimming the 100 breaststroke. Then once I found the 100 fly, too, swimming got more exciting.’’

Devich doesn’t exactly know why she had success in the butterfly, but she feels that stroke has similar tempo to the breaststroke. Once she made it her second event, she started working a lot on it.

“I just started getting better at it.’’

Her success culminated with a section championship after she waited for the results from the three sites to come in.

Devich was the second seed in the 100 butterfly and put down a 1:01.67. She patiently waited for the results of top seed Lindsay Johnson of Denfeld, who was swimming in Duluth.

The results were finally updated and Devich was in shock.

“I was like “Whoa! I really did win the section in the 100 butterfly.’ That was really exciting. I really wanted to win the fly this year.’’

With her high school career, Devich is considering her options for college. She has applied to a few places and a couple of schools have looked at her for swimming. She is thinking about studying special education, but is still undecided.

“I hope she swims in college,’’ Klovstad added.