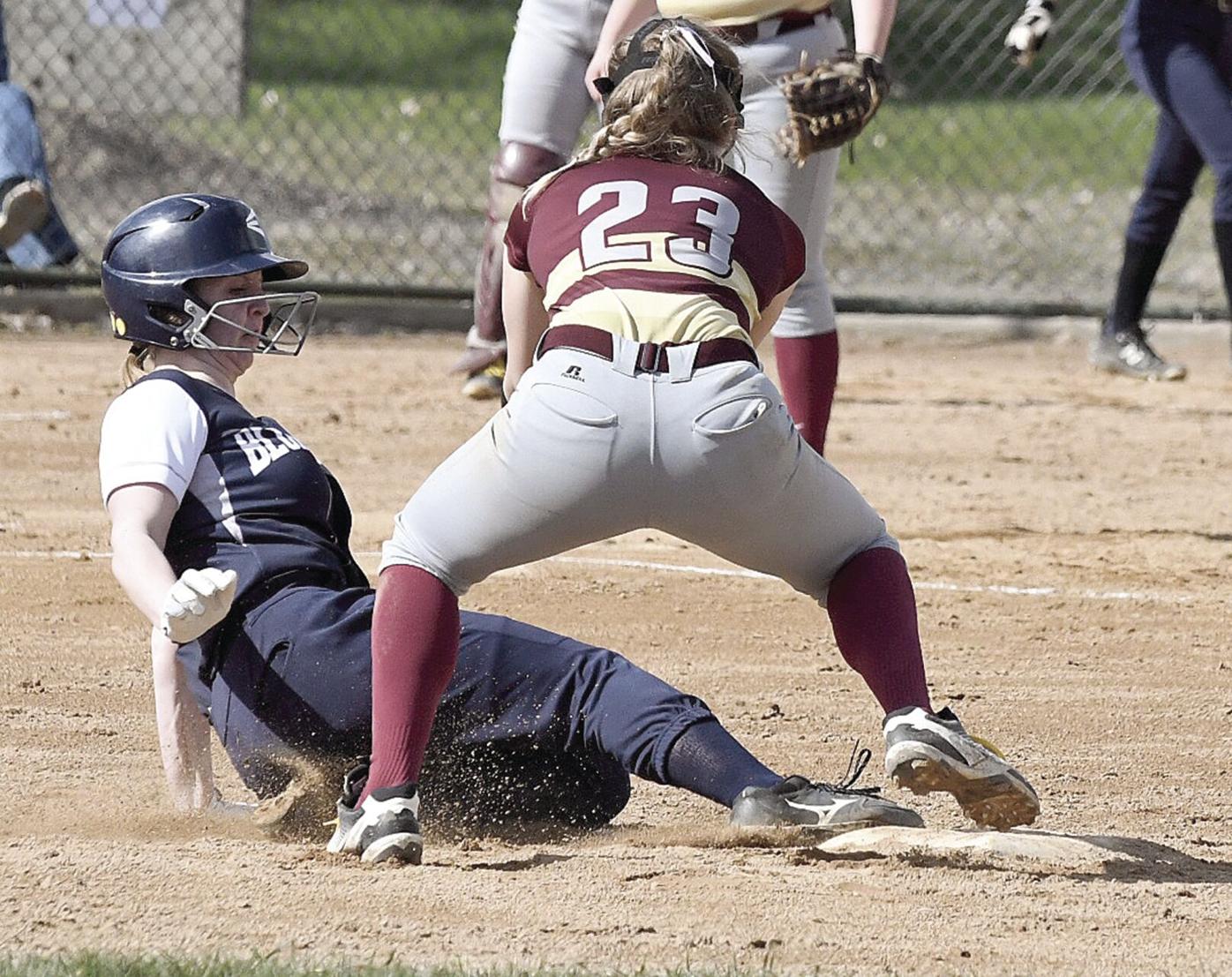 Hibbing’s Madison St. George (left) steals second base during the fifth inning of the Bluejackets game with Duluth Denfeld Thursday at Bennett Park. Taking the throw is the Hunters’ Calyn Volkenout. 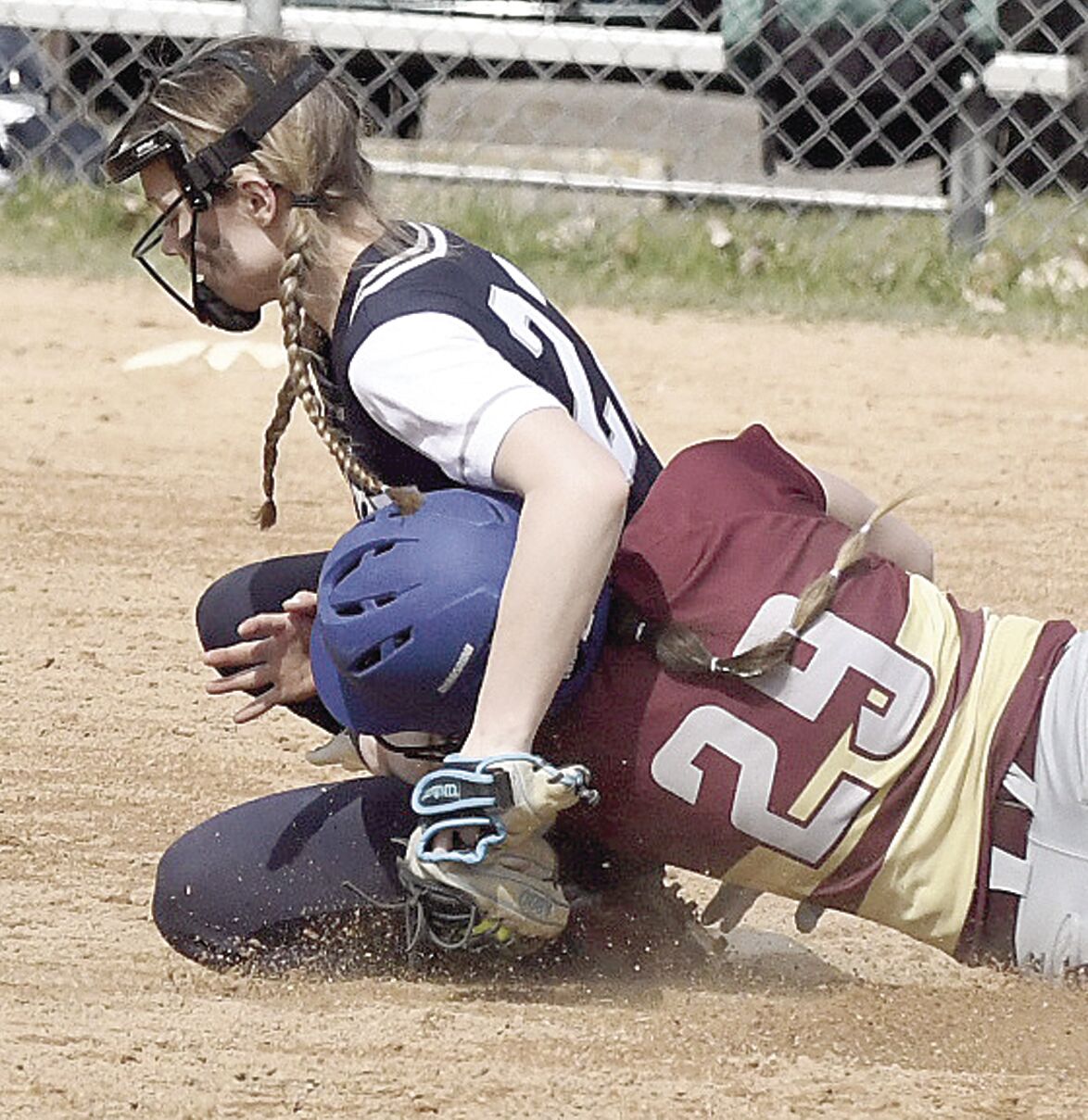 Hibbing’s Monroe Rewertz (left) gets tangled up with Duluth Denfeld’s Lindsay Johnson after she stole second during the fourth inning of their game Thursday.

Hibbing’s Madison St. George (left) steals second base during the fifth inning of the Bluejackets game with Duluth Denfeld Thursday at Bennett Park. Taking the throw is the Hunters’ Calyn Volkenout.

Hibbing’s Monroe Rewertz (left) gets tangled up with Duluth Denfeld’s Lindsay Johnson after she stole second during the fourth inning of their game Thursday.

HIBBING — After striking out 17 Cherry hitters in a 5-2 win over the Tigers Wednesday, what could Hibbing freshman pitcher Aune Boben do for an encore?

How about striking out 14 and throwing a no-hitter as the Bluejackets beat Duluth Denfeld 7-0 Thursday at Bennett Park Field.

Boben walked three, and Hibbing committed one error as the Hunters only had four batters reach base.

“She’s tough because she challenges everybody,” Hibbing coach Bryan Terzich said. “With the mix of pitches she has, it’s tough to read her. It’s tough to get a good strike that you can drive.

“Their centerfielder (Hanna Hovland) is a phenomenal player. She hit the hardest ball today. Once we get a lead, we’re going to be tough because Aune brings it.”

The only run Aune would need was scored in the first inning, and she had a hand in that with a triple, then Maddie St. George hit a sacrifice fly to make it 1-0.

The Bluejackets would add three more runs in the third as Maddie Rewertz led off with a double, and she scored on a single by Megan Bussey.

“We had a little tenacity in the first inning,” Terzich said. “We came out and scratched a run across, then we got those three in the third. I put the onus on the girls to get some more runs.

“What I’m looking for is the intensity of their at bats. This is a process. We’re not playing for April 29. We’re playing for June 1 when the playoffs come. That’s what we’re doing all of this for.”

Terzich is looking for consistency with his offense, and so far, he’s liked what he’s seen.

“There’s been about four or five girls that have been consistent, that have hit the ball hard,” Terzich said. “The other girls, we have to get them going, to understand what they’re doing at the plate.

“I’m seeing some good things from the underclassmen. It’s a good mix. Defensively, we’re tight right now. I like what we’re doing.”

It’s been hard to get a read on the Bluejackets’ defense because of all the strikeouts, but the one error Hibbing did have, it may have been the first of the season.

“That’s tough,” Terzich said. “There may have been another error, but I don’t remember it. When you have Reese Aune making diving plays and throwing people out (on Wednesday), we preach play on every pitch.

“They bring it. That’s the intensity. These girls are intense.”

Boben led the way with two hits. Getting one each were Bussey, Monroe Rewertz Emma Kivela and Maddie Rewertz.