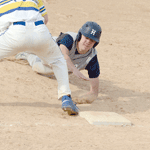 Hibbing’s Cole Mammenga (right) dives back into first base on a pick-off attemp during the second inning of the Bluejackets game with Esko Monday at Al Nyberg Field. 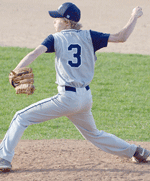 Hibbing pitcher Austen Kolden delivers a pitch during the seventh inning of the Bluejackets game with Esko Monday at Al Nyberg Field.

Hibbing’s Cole Mammenga (right) dives back into first base on a pick-off attemp during the second inning of the Bluejackets game with Esko Monday at Al Nyberg Field.

Hibbing pitcher Austen Kolden delivers a pitch during the seventh inning of the Bluejackets game with Esko Monday at Al Nyberg Field.

HIBBING — After 2 1/2 innings of play, the Hibbing High School baseball team only had one hit, no runs and trailed 3-0 on the scoreboard to Esko.

After that, it was all Bluejackets.

From the third inning on, Hibbing pounded out 16 hits en route to a 12-4 victory over the Eskomos Monday at Al Nyberg Field.

It was quite the turnaround for the Bluejackets.

Esko got to Hibbing starting pitcher Travis Carruth early when Brady Kaldahl doubled to right, then Ryan Nelson’s line drive was misplayed for an RBI double.

Tyler Peterson followed with an RBI single and it was 2-0.

Esko nicked Carruth for a run in the third as Nelson reached on an error, then a run-and-hit, Peterson hit a single down the right-field line. Peterson got caught too far off of the bag on the relay to the infield and tagged out by Bluejacket first baseman Zack DeBoom, but Nelson was able to score on the rundown between first and second.

It’s not the position Hibbing wanted to be in.

“We knew Esko was going to be a tough team,” Hibbing manager Jay Wetzel said. “When you look at their record, who they’ve played and who they’ve beat, they had a pretty good run going. They had won 10 games in a row.

“When you see them go double, double, single, single in the first and put up two, you knew you had a fight on your hands. We didn’t get much going offensively in the first two innings. We had a hit batter and a single. It looked like we were in a for dogfight. Fortunately, a few hops when our way, and we were able to put a couple of big innings on the board that made all of the difference.”

Hibbing needed to do something and quickly, and with one out in the third, Riley Versich got a rally started by reaching on a error.

Dylan Mattson singled, then Anthony Kanipes drew a walk to load the bases. Zack DeBoom followed with a line shot off the left-field wall to plate two runs and make it 3-2.

Jaiman Lamphere followed with an RBI single to tie it 3-3, and putting runners on first and third, with one out.

Carruth helped out his own cause by dribbling an infield hit, scoring DeBoom. The throw to first was wide, which allowed Lamphere to score all the way from first base to make it 5-3.

“We started to put the ball in play,” Wetzel said. “Their pitcher changed speeds pretty well on us, and we were a little jumpy out there. We were finally able to relax and sit back on some pitches.

“We looked to drive the ball better.”

Hibbing added to its lead in the fourth as Mattson was hit-by-a-pitch with one out. He stole second, then went to third on an infield single by DeBoom. Lamphere followed with a line-drive single to left to make it 6-3.

Carruth and Glad followed with RBI base hits and it was 8-3.

Hibbing didn’t rest on its laurels in the third inning.

“That was huge,” Wetzel said. “It was a two-run ball game at that point, and ultimately, we were able to answer back a bit and get after them. Scoring in consecutive innings is big for us.”

The Bluejackets actually scored in three of their last four innings, getting four more in the sixth.

DeBoom led off the inning with a double, then scored on a single by Lamphere, who raced to second on an outfield error. Glad singled him to third, then Mickelson singled Lamphere home.

Will Durie followed with a base hit, then Versich was intentionally walked to load the base. Mattson was hit by a pitch to force home a run, the third time in the game when a pitch grazed him.

“Last week, we had a couple of games where we struggled offensively,” Wetzel said. “We need to be consistent offensively. We have to give ourselves an opportunity in every inning to have chances. We did that tonight.”

The Eskomos scored once in the seventh on an error, but they did leave the bases loaded during the inning.

DeBoom, Lamphere and Carruth all had three hits.

Kaldahl and Peterson both had two hits.

BIWABIK — Maria Gherardi shot a 90 at the Mesabi East Invite held Monday at The Quarry at Giant’s Ridge.

Gherardi had two birdies in a row during her round.