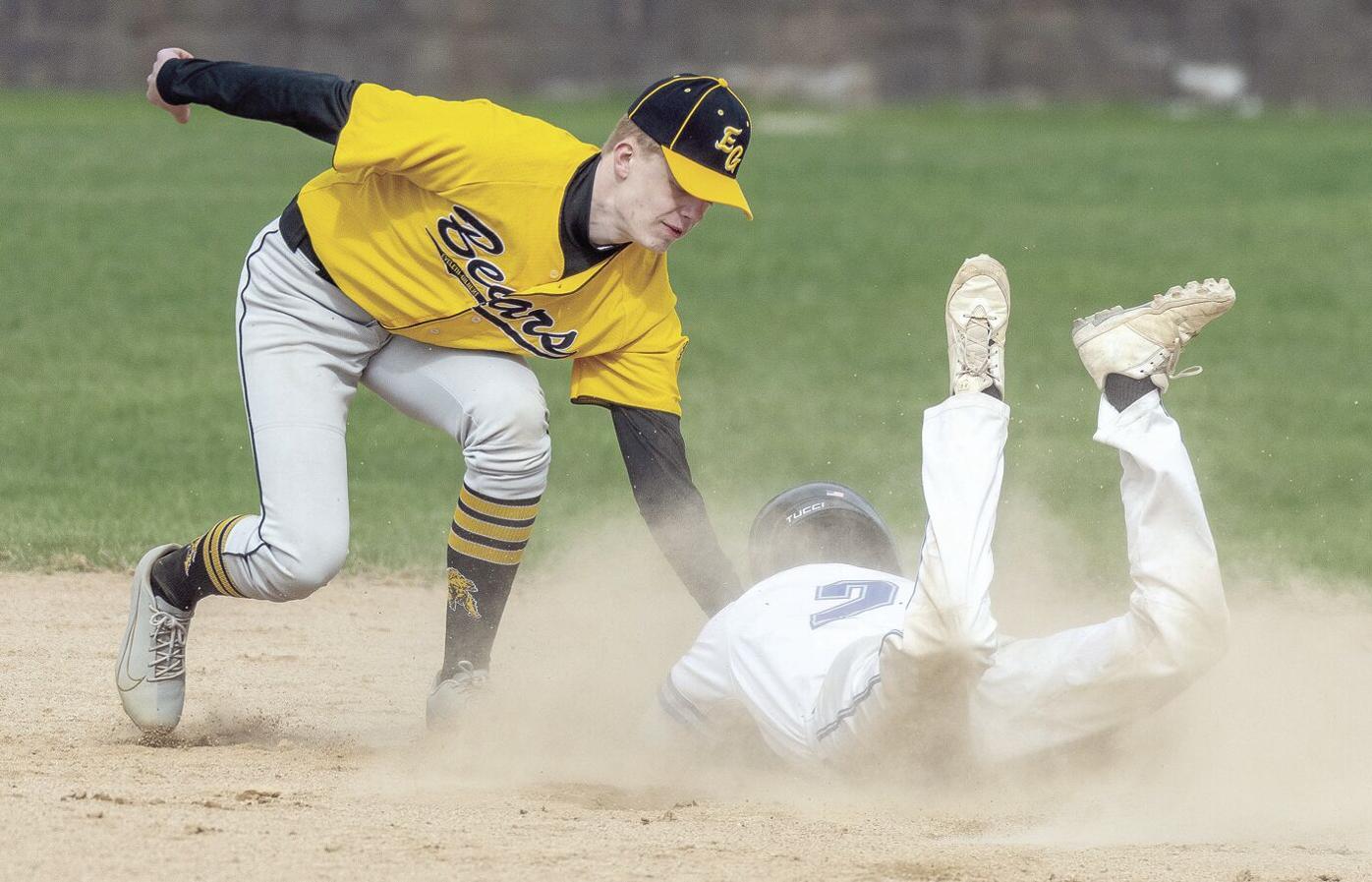 Virginia's Landin McCarty dives into second beating the tag from Eveleth-Gilbert shortstop Carter Mavec during the first inning of Monday's game in Eveleth. 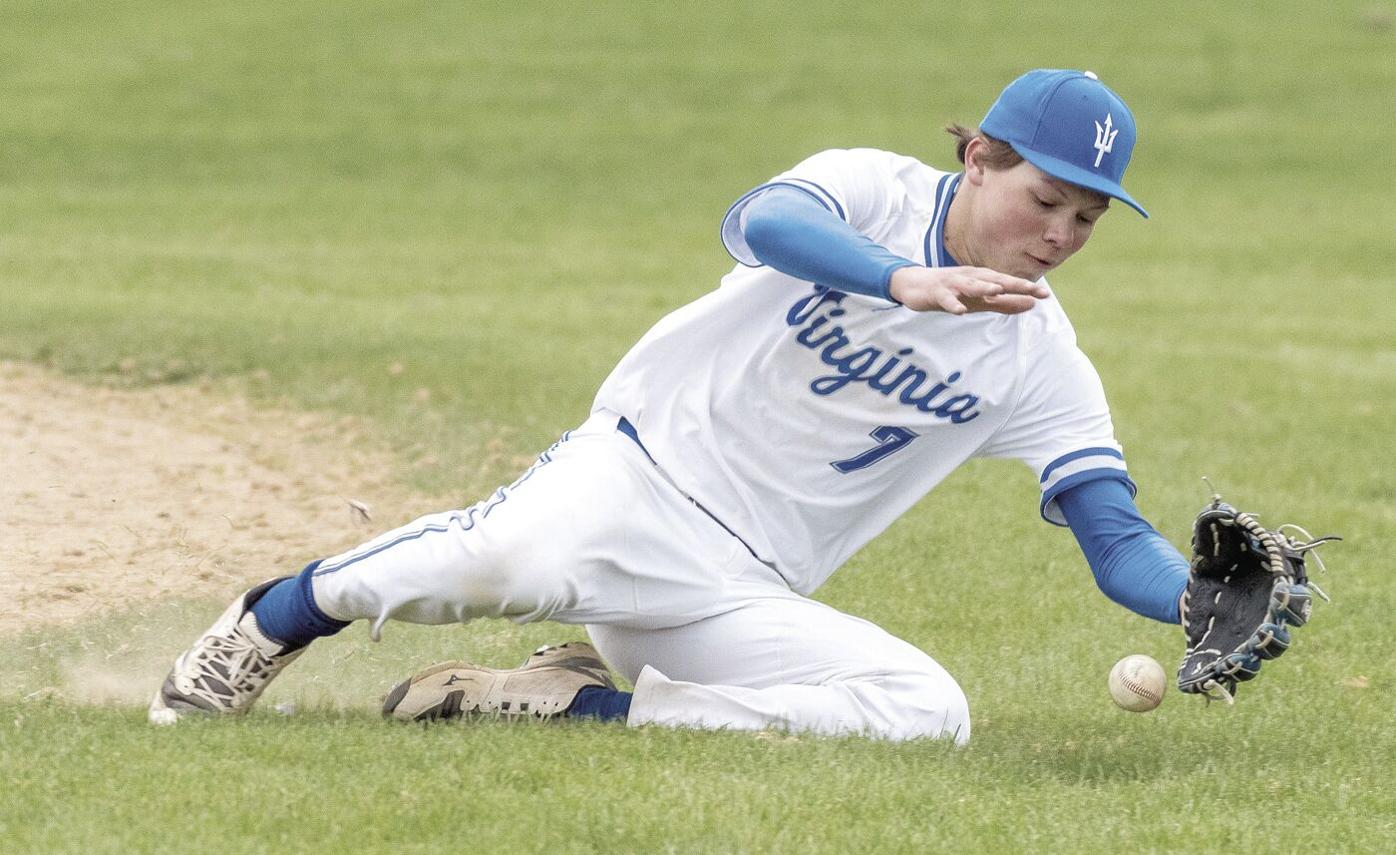 Virginia second baseman Dylan Hedley dives for a line drive during the 5th inning of Monday's game against Eveleth-Gilbert in Eveleth.

Virginia's Landin McCarty dives into second beating the tag from Eveleth-Gilbert shortstop Carter Mavec during the first inning of Monday's game in Eveleth.

Virginia second baseman Dylan Hedley dives for a line drive during the 5th inning of Monday's game against Eveleth-Gilbert in Eveleth.

EVELETH — Virginia put together another big hitting night, while Tommy Nemanich kept the Golden Bears off balance in a 14-6 road victory.

Nemanich went 6 1/3 innings and was in control throughout until giving way to reliever Daniel Moore in the seventh.

“He’s kind of shown here now, three games in a row when he’s got the start, that he’s had really good quality starts and gone really deep,’’ said Blue Devils head coach Brian Skadsem. The coach wanted to get the senior a complete game but knew he had to protect the lead.

What led to Nemanich’s strong outing?

“He just had good command and located his pitches well, especially early. He mixed things up very well in terms of his type of pitch,’’ Skadsem said. “That helped in terms of keeping hitters off balance.’’

Virginia routinely put the bat on the ball and had a 4-0 lead after 3 ½ innings were complete.

“We hit the ball much better. Kids are seemingly seeing the ball well,’’ Skadsem said, ‘’with a lot of confidence and executing some of the stuff we’re trying to do very well. We just want to continue to feed off of that.’’

Daniel Moore led the Virginia hit parade as he reached base each time he was up. That included two doubles, a single and four RBI. He also reached on an error.

“Dan is seeing the ball very well,’’ said Skadsem, while a number of other kids had quality at bats.

Two suicide squeeze bunts yielded runs for Virginia, as well, in both the first and fifth innings.

Logan Nordby was at the plate both times and put down a pair of nice bunts down the first base line. One run scored in the first, while two ultimately reached home in the fifth. The bunt brought one Blue Devil home and the E-G throw to first base allowed another Virginia runner to score for a 6-2 lead and fuel the Devils momentum.

“It was great execution of that play. It was designed to do exactly what it did. We’re Ok giving up an out in that situation. Very well executed by Logan.’’

Virginia added eight more runs in the sixth and seventh innings to basically put the game away with a 14-3 lead heading to the bottom of the seventh.

Eveleth-Gilbert put together two singles and a walk in the bottom of the seventh before Nemanich was relieved by Moore.

A sacrifice fly by Brandon Lind plated one Golden Bear before another walk was issued. Will Bittmann proceeded to smack a two RBI single to cut the deficit to 14-6. However, the Virginia stopped the E-G run with a bases loaded ground out to preserve the victory.

Lindseth said he couldn’t explain his team’s poor outing. “We sure didn’t give them much of a contest.’’ The Bears had a couple of starters out with injury, but that is no excuse, he added.

“I’m glad it’s now and not in June or late May,’’ Lindseth said. “Hopefully they learn from this and come back with some fire tomorrow.’’

Soular earned the win for Mesabi East, giving up three runs on three hits and three walks over his four innings of work. Landyn Houghton took the loss for Northeast Range, giving up 11 runs in two innings on five hits and four walks while striking out one.

At the plate for Mesabi East, Ty Laugen went 3-4 with two doubles and two RBIS. Dakota Kruse was 3-4 with an RBI and a double. Charlie Karish finished 1-2 and Brayden Leffel finished 1-2 and had a walkoff single in the fifth to put the Giants up by 10, ending the game.

At Cook, Cece Schneider struck out 11 Grizzlies on the way to her complete game win as Mountain Iron-Buhl downed North Woods 9-5 Monday evening.

Leading in the circle, Schneider finished the day giving up just four hits in seven innings of work while the Rangers offense gave her a solid lead to work with.

Desi Milton finished the day 3-4 with a double and two RBIs. Elle Otto was 4-5 with two RBIs. Alix Swanson ended the day 2-3 with an RBI and Aaliyah Barfield finished 2-4.

Head coach Jesse White said it was a solid game both offensively and defensively from his team.

“We had good defense and pitching the whole game,” White said. “We ended up getting a lot of good at bats from the back half of the lineup. Some good hits and good bunts that loaded up the bases for the top of our order to bring home and they came through.”

MI-B (5-5) will host Northeast Range Wednesday at 4 p.m. and will then take on Nashwauk-Keewatin immediately following that game.

At Moose Lake, the Golden Bears ran into another tough team Monday as they fell to hosting Moose Lake/Willow River 11-1 in five innings.

Head coach Paula Dundas complimented the Rebels and said her squad weren’t able to score in key situations to extend the game.

“They’re a good squad,” Dundas said. “They hit the ball well and made solid plays all around. We hit the ball a bit but we could only push one run across with the bases loaded in the first. Later in the game we had runners on second and third with one out and couldn’t push anything across. That made it tough for us.”

Eveleth-Gilbert will be back in action today when they host International Falls.