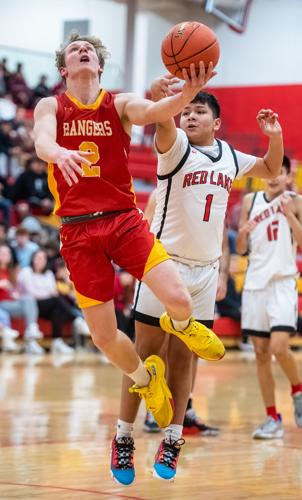 Mountain Iron-Buhl’s Asher Zubich drives to the basket during the second half of Tuesday’s home game against Red Lake. 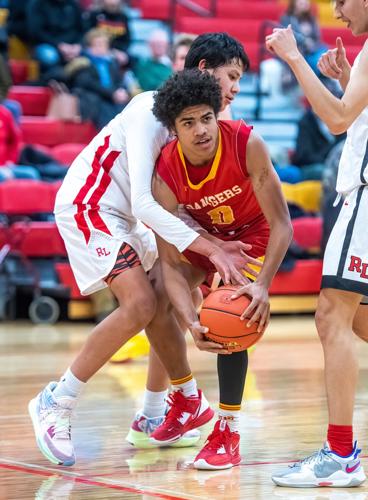 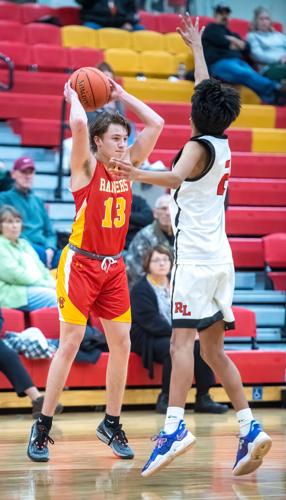 Mountain Iron-Buhl's Josh Holmes fires a pass over Red Lakes' Jack Brown during the second half of Tuesday night's game in Mountain Iron. 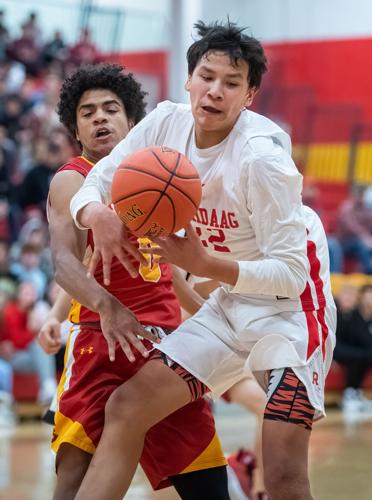 Red Lakes' Austin Perkins and Mountain Iron-Buhl's Braylen Keith battle for a rebound during the second half of Tuesday night's game in Mountain Iron. 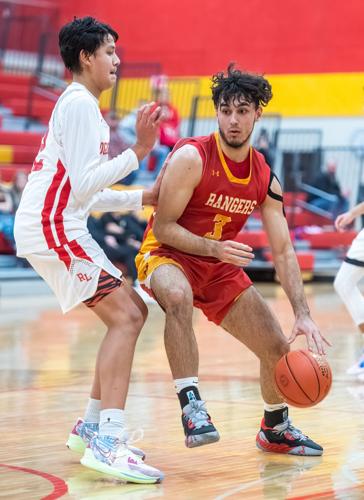 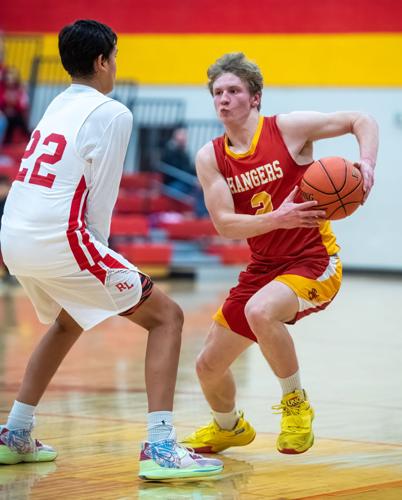 Mountain Iron-Buhl’s Asher Zubich drives to the basket during the second half of Tuesday’s home game against Red Lake.

Mountain Iron-Buhl's Josh Holmes fires a pass over Red Lakes' Jack Brown during the second half of Tuesday night's game in Mountain Iron.

Red Lakes' Austin Perkins and Mountain Iron-Buhl's Braylen Keith battle for a rebound during the second half of Tuesday night's game in Mountain Iron.

MOUNTAIN IRON—For the Mountain Iron-Buhl boys’ basketball team, one day of practice wasn’t ideal but it was enough to get the job done on Tuesday as the Rangers downed Red Lake in a high-scoring season opener, 97-93.

The Rangers were led by Asher Zubich’s game-high 39 points (including six threes) while the Warriors’ Jack Brown poured in 29 points on nine made threes. Combined, the two teams hit a total of 33 three-pointers in the contest.

After the game, Rangers head coach Jeff Buffetta commended his team, the majority of which played in a football state championship just three days prior.

“There’s a lot of things we have to do better but we also did some gutsy things too tonight,” Buffetta said. “In the end, they showed enough to be able to pull a game out and that’s not easy with what they just did on Saturday. They were able to come together within a couple of days. They could have easily wanted a week off, but they’re here. We’ll have a lot to build on and we’ll get a lot better as we go forward.”

While those not on the football team had the full two-week workup to the first game, the entire team had just one day of practice under their belt. Buffetta said the circumstances weren’t perfect, but it meant a lot that his team managed to put a solid product on the floor and win against a hot shooting team.

“It’s not enough time to shore up rotations and floor balance but, you know what, it was enough for them to want to come here and play basketball and give it their best.”

The hot shooting from both sides started right from the opening tip. Zubich nailed a three on the Rangers first offensive possession and was backed up by a three from Cooper Salinas. Red Lake responded with Ken Fox knocking down a long range bomb before Brown nailed his first on the night, 6-6.

Both sides traded blows for some time. When Zubich hit another three, Fox responded with one of his own. Later, Zubich knocked down another in response to Brown’s second on the night, 23-19 Rangers.

The Rangers broke open a slight lead as the half wore on thanks to their efforts in the paint and on the drive. Mason Clines picked up a rebound and put it back in for two. Zubich later grabbed an open layup and MiCaden Clines scored on a baseline drive to make it 33-27.

Red Lake’s Gerald Kingbird kept the Warriors in the game, however, knocking down a long range shot of his own before taking one to the hoop to make it a five-point game, 38-33.

MI-B opened up a 10-point lead late in the half after Josh Holmes scored in the paint, 43-33. Two more threes from Salinas and Zubich as well as a free throw from Zubich ended the half for MI-B as they went into the break up 50-38.

When the second half got underway, Red Lake immediately showed that they weren’t interested in letting the game be a blowout. A Brown three got the deficit back into single digits. The Warriors got the deficit down even further with a Fox three, a lay-in from Kingbird and four straight points from Cade Beaulieu, 55-53.

A Zubich three gave MI-B breathing room but back-to-back scoring drives from Kingbird and Fox made it a one-point game, 58-57. The Rangers eventually rallied to go up by seven off of a TJ DuChamp 3, but Red Lake stuck around once more.

Trailing 79-71, Brown knotted the game up for the Warriors with back-to-back threes and then a pair of free throws. Red Lake then took their first lead of the second half when Gordon Thompson scored on the drive.

The two teams traded blows even further. After Zubich sank a pair of free throws to put MI-B up 93-90, Brown hit one last three to tie the game with under a minute to play.

Thankfully for the Rangers, they were able to maintain possession and force Red Lake to foul them. Zubich was fouled twice in the closing seconds and hit all four free throws to put the game away, 97-93 for MI-B.

Up 12 at the break, Buffetta knew that the game had yet to be decided, especially considering the circumstances and the team they were playing.

“We’re slow with our rotations a bit and that’s to be expected. When you face a team like that, you can’t be slow on your rotations. They exposed us on that, but man, they can shoot. They made us pay but we kept fighting.”

When it came to game endurance, Buffetta said he was pleasantly surprised with how fit the team was as a whole.

“It was a little bit better than I thought it would be. These guys were in great shape for football and some of that carried over. Nobody looked like they were going to fall apart and not be able to get up and down. They were working hard and I’m happy with that.”

Knowing his team can shoot the lights out, Buffetta says that team defense will be an important fixture at practice moving forward.

“They’re a hard team to guard. They have a lot of kids that can shoot and put the ball on the floor so that made it challenging for us. We have to be a little more up to par on our team defense and limit their points better than we did. That stuff will have to come with time that we just haven’t had a lot of yet.”

WILLOW RIVER—The Rock Ridge boys’ basketball team fended off a strong comeback from Moose Lake/Willow River in the second half, escaping hostile territory with a 68-67 victory to get the Wolverines in the win column.

The Wolverines got solid performances across the lineup with Noah Mitchell and Carter Mavec leading the way with 12 points each. All 12 from Mavec came from beyond the arc. Griffin Krmpotich added 10 while Grant Hansen had nine.

Adam Neumann led the Rebels in the losing effort with 23 points. Nolan Nelson added 13 and Jimmy Walker chipped in with 10.

Rock Ridge (1-1) will travel to Greenway on Friday.

Chiabotti finished the game with 28 points to help hit the career milestone, but the Grizzlies were led in the box score by Jonah Burnett, who finished with 27-second half points to pace all scorers with 39. Brenden Chiabotti added 12 more for the Grizzlies.

The Huskies were led by a trio of 16-point scorers in Caden Rahier, Bradley Haley and Jhace Pearson. Matt Vosika chipped in with 11.

AURORA—The Mesabi East boys’ basketball team faced a tough and well-coached Deer River in their season opener on Tuesday as the Giants fell to the Warriors 101-45.

Sophomore Cameron Jones led Mesabi East in the loss with 19 points including four made threes. Hayden Sampson finished with 14 for the Giants.

The Warriors were led by Caiden Schjenken’s 30 points. Ethan Williams finished with 19. Rhett Mundt chipped in with 13.

After the game, Giants head coach Erik Skelton gave praise to the sophomore Jones in his first varsity start.

“He’s making his first start and got 19 points for us and went 4-5 on threes in a good all-around game,” Skelton said. “Deer River is a really good team and extremely well coached. They beat us on both ends of the court. There’s plenty of good takeaways but lots to work on.”

Anna Westby led all scorers in the contest, putting in 24 points for the Wolverines. Maija Lamppa added 19 and Aleksia Tollefson had 10.

Rock Ridge (3-1) is set to travel to North Branch on Friday.

Grace LaTourell led the Timberwolves in the win with 21 points. Madeline Kallberg added 15 and Madeline Perry finished with 11.

Ely head coach Max Gantt said after the game that a strong defensive effort laid the groundwork for the win.

“We played great team defense,” Gantt said. “We trusted each other and moved the ball well on offense. We played with focus and discipline on both ends and hope to be able to continue to build on this win as it has been the best we’ve looked so far.”

This offer is currently unavailable.