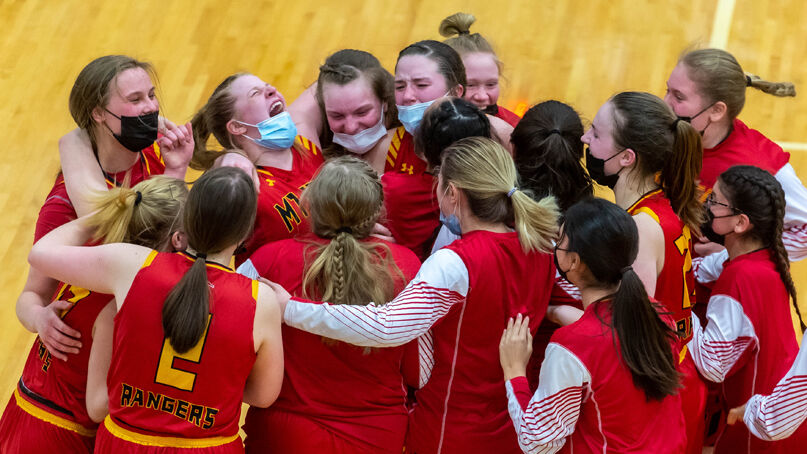 Members of the Mountain Iron-Buhl Rangers after pulling off a last second, one-point win against Cass Lake in Tuesday's state quarter final game in Pequot Lakes. 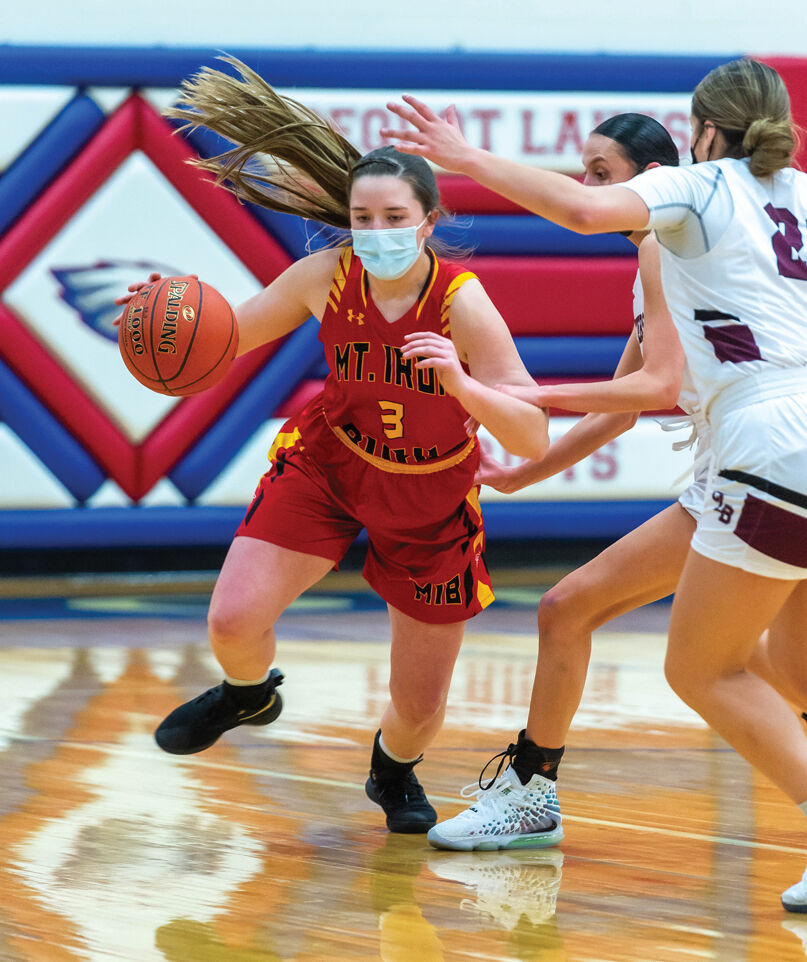 Mountain Iron-Buhl's Hali Savela drives up the court during the first half of Tuesday night's state quarter final game against Cass Lake in Pequot Lakes.

Members of the Mountain Iron-Buhl Rangers after pulling off a last second, one-point win against Cass Lake in Tuesday's state quarter final game in Pequot Lakes.

Mountain Iron-Buhl's Hali Savela drives up the court during the first half of Tuesday night's state quarter final game against Cass Lake in Pequot Lakes.

PEQUOT LAKES — The Mountain Iron-Buhl girls’ basketball team only led in their Class A state quarterfinal matchup with Cass Lake-Bena for about 30 seconds.

After an early 3-2 lead in the game, MI-B trailed the rest of the way until the final 22 seconds. That final late lead was all they needed Tuesday afternoon, as they hung on to beat the Panthers 50-49 to move on to the state semifinals.

Trailing by 1 with 22.3 seconds to play, the Rangers’ Lauren Maki nailed a pair of free throws to give MI-B the one-point lead while setting up the final possession of the game for the Panthers.

Following Cass Lake-Bena’s final timeout, the Panthers were unsuccessful in finding an open shot and nearly turned the ball over with 1.2 seconds to play. A held ball call kept possession with CL-B. On the inbounds play, the Panthers’ Krisalyn Seeyle got it into all-state selection Taryn Frazer.

Frazer pulled up for the final shot near the three-point line, but MI-B’s Jordan Zubich was able to get a hand on it as time expired. The block was clean and the Rangers held on to the one-point lead, earning a spot in the state semifinals and a date with defending champions Minneota.

With the contest coming down to the final 22 seconds, Buffetta gave credit to his entire team for never letting things get too far out of reach.

“It’s the state tournament,” Buffetta said. “You’re playing a good team and you just can’t fold. You have to keep scrapping and scraping by. We did that all game long and you have to hope you’re going to find a way to get a lead late. I’m proud of our girls today. It wasn’t pretty but they never quit.”

With Maki hitting the go-ahead free throws to take the lead, Buffetta says it was a big moment for the junior in one of the most important games of her career.

“Everyone is going to react differently when you get those last-minute, game-winning shots. She stepped up calmly and knocked both down. It was big for her and it’ll be big for her confidence going forward.”

In the timeout before the final Panthers possession, Buffetta instructed his squad to not give up any close range shots, as well as avoid any shooting fouls.

“Make sure the ball gets passed outside the three point line. We want them to win on a long shot, make them make a spectacular play to win the game. The last thing we wanted to do was foul there and it ended up working out for us.”

Things weren’t as easy for the Rangers early in the contest, with the Panthers holding a consistent 5-8 point lead for most of the half. Both teams had their fair share of turnovers, but the Rangers were unable to turn those into points while the Panthers looked comfortable controlling a slower pace of play.

Trailing 16-8 almost halfway through the half, the Rangers slowly clawed their way back into the game as the half came to a close.

Buckets from Zubich, Sage Ganyo and Maki made it 22-19 in favor of CL-B. The Rangers then got it within one thanks to a bucket in the paint from Hali Savela off the bench. Her first bucket of the game, Savela would eventually finish with a game-high 18.

Seeyle scored on the drive for the Panthers, but after one made free throw from MI-B’s Jacie Kvas, the Rangers were able to tie things up with Maki scoring in transition on the final bucket of the half, 24-24.

On his team’s first half play, Buffetta said his squad never felt comfortable and weren’t able to play the way they wanted to without being the aggressors.

“I think we got hung up a bit on our own turnovers. We didn’t handle the pressure well early and that got in our heads a bit. Instead of being the aggressors, we became really passive and we don’t play at the same speed we like to play at if we’re being passive.”

MI-B was still unable to grab a lead for most of the second half with Seeyle fueling the Panthers offense. CL-B stayed up, but never put themselves more than five points from the Rangers.

Trailing 35-30, the Rangers used buckets from Butler and Savela to eventually tie things at 37. The Panthers continued to take small leads but Mountain Iron-Buhl got a big scoring burst from Savela to always keep things close.

Hitting shots from all over the court, Savela kept the Rangers in the game and looked comfortable when things got tough. Dealing with the Panthers zone defense, Buffetta said Savela was the perfect player to attack the center of the defense and nail her shots.

“She had some big minutes for us. We needed someone who wanted to attack the middle of their zone defense. When she decided that she was going to be that person, she really took advantage of it and was able to make her shots.”

Down 47-43, Savela got it within two scoring on the cut. The Panthers answered back after Seeyle was left alone down low but an ice-cold three from Savela on the next possession made it a one-point game, 49-48.

Less than a minute to go, CL-B couldn’t find any late shots and a foul put Maki on the line for a 1-and-1. Sinking both, MI-B took only their second lead of the game and held on for the win, beating the Panthers for the third time this season and punching their tickets to the semifinals. Savela and Seeyle led their teams respectively with 18 points each.

Pulling out the win, Buffetta gave credit to the Panthers for executing a strong game plan against the Rangers.

“Their length and their ability to play the zone really bothered us. We were never able to feel comfortable the entire game. They were really active and used their strengths to their advantage against us.”

The win sets up a date with defending champions and No. 1 ranked team Minneota. With a week until their semifinal matchup, Buffetta says the Rangers will focus on themselves as they get ready for the Vikings.

“They’re one of the best programs in the state of Minnesota. They’re good every year and they’ve been that way for as long as I can remember. We’re excited to get another chance to play and the rest of this week has to be about us. We have to keep everyone healthy and get our reps in. It’ll be a fun opportunity to get to play them.”

MI-B and Minneota will do battle Tuesday, April 6 at 4:30 p.m. at the Target Center.