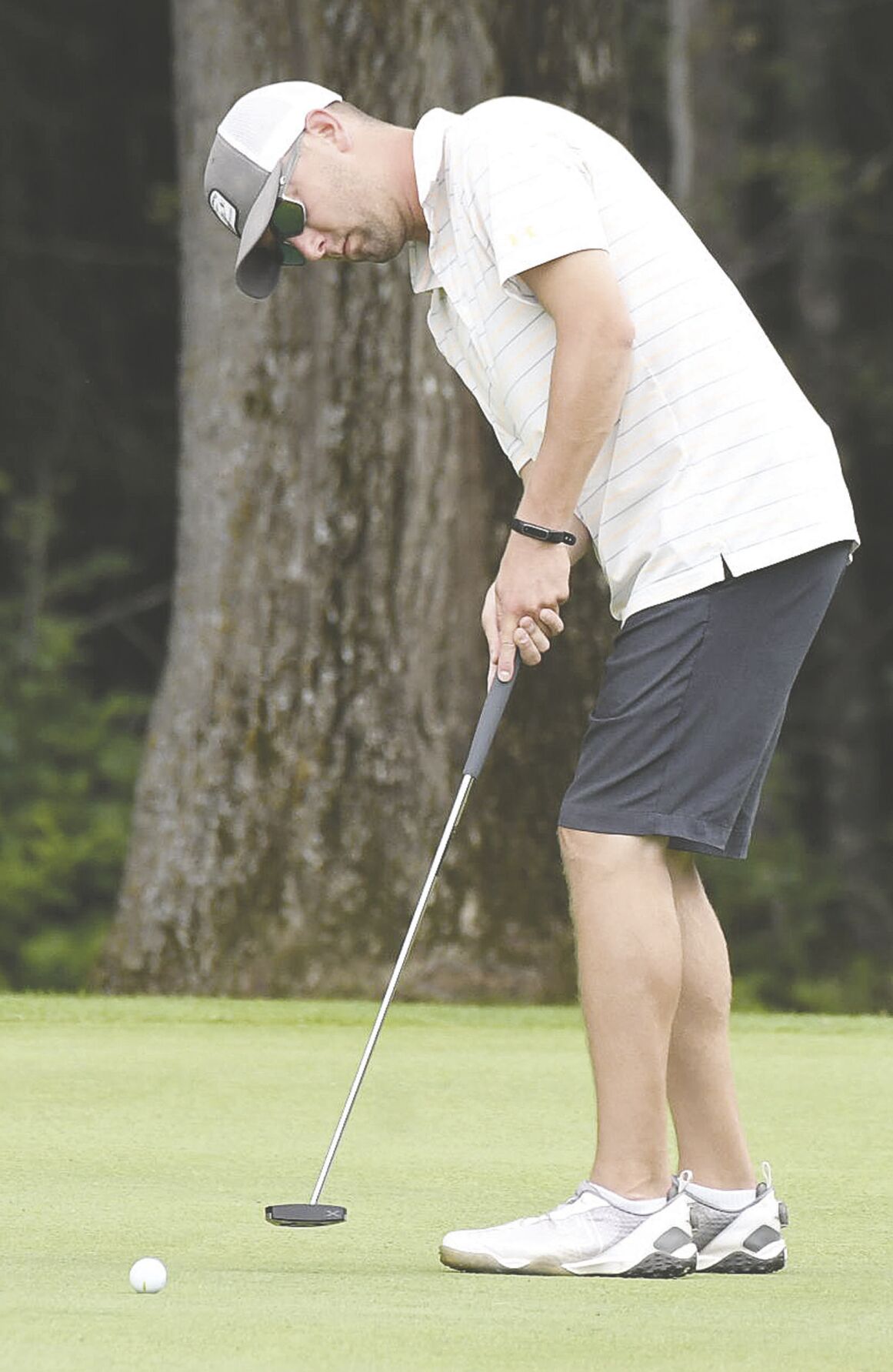 Jeff Thune hits a putt on the 12th hole during the championship match of the Club Championship Sunday, at the Mesaba Country Club. 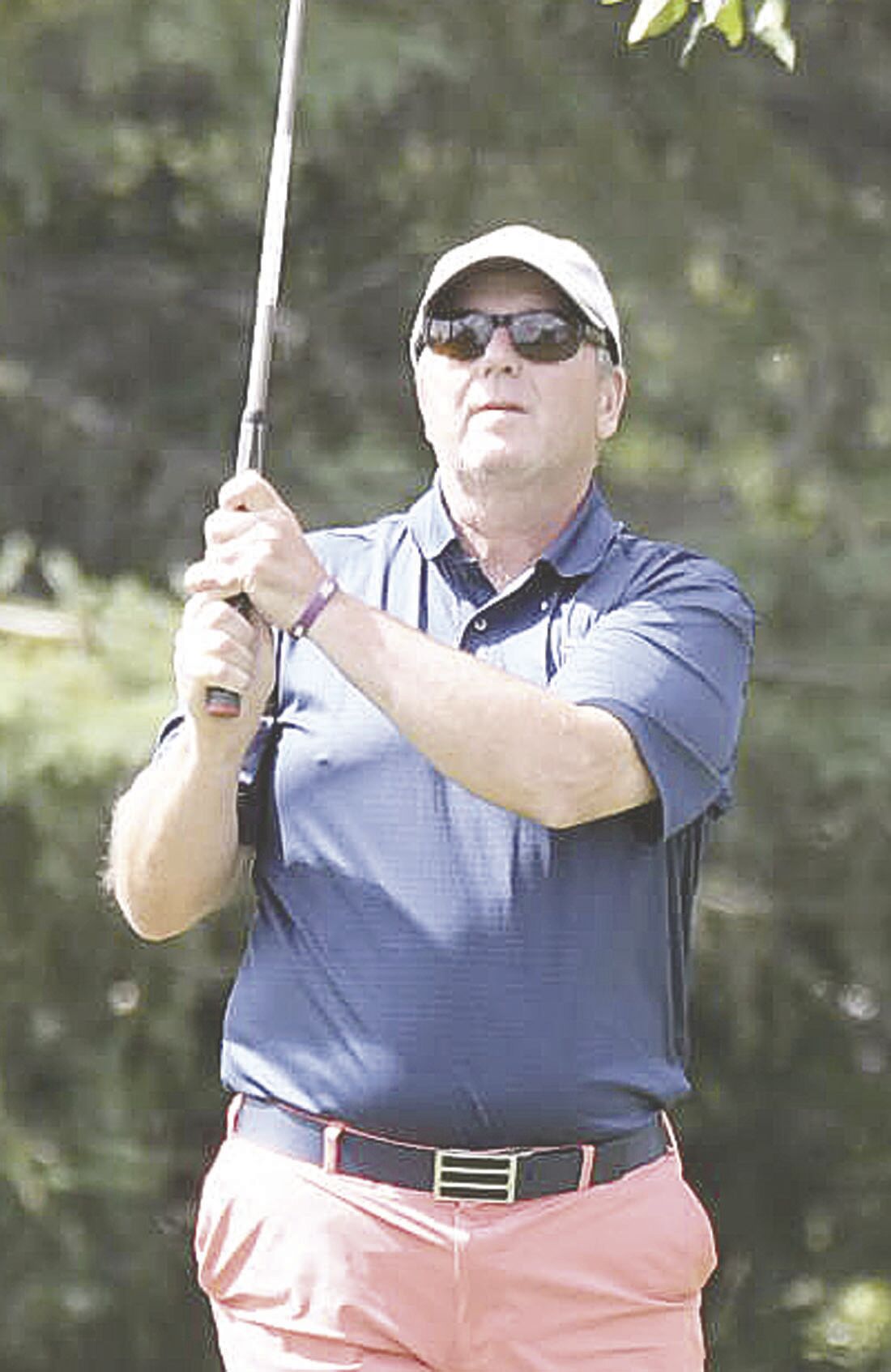 Marv Vuicich watches his tee shot on the par 3 8th hole during the Senior flight championship match Sunday, at the Mesaba Country Club.

Jeff Thune hits a putt on the 12th hole during the championship match of the Club Championship Sunday, at the Mesaba Country Club.

Marv Vuicich watches his tee shot on the par 3 8th hole during the Senior flight championship match Sunday, at the Mesaba Country Club.

Thune, who last won the Mesaba Country Club Men’s Club title in 2012, beat Travis Timmerman in the semifinals, then he got his second title when he beat Ryan Riihinen 1-up in the championship match held Sunday.

It was a grueling match, which saw Thune trailing for most of the back nine, but two birdies on holes 16 and 17 got him the title.

“There’s a lot of good players, but I hadn’t been playing my best golf when you need to,” Thune said about his past performances. “The last nine holes I played, that’s the best golf I played all tournament, by far.”

“I wasn’t making many putts,” Thune said. “I didn’t make too many birdies all weekend, which is what you need to do in match play. You’re not looking to win holes with pars. That’s a gift if that happens. You have to make birdies.

“They were few and far between, for the most part, this weekend. I got a couple late during the back nine, and that ended up being the difference.”

His tee ball was fine, but he didn’t exactly hit the second shot he wanted to hit.

“It was back into the wind,” Thune said. “I didn’t quite have enough for the 56-degree (wedge), but you can’t go over (the green). I chose to hit the 56 hard, rather than punch a gap (wedge), just to protect against going over.

“I caught it a touch heavy, and it came off the front. It was a long putt. I thought I hit it hard, but it still came up a few feet short.”

Thune didn’t make that putt, so he took a five.

Riihinen had to punch up from under a tree on his second shot, and he came up short of the green. He hit a brilliant chip shot to within five-feet of the hole.

With a make, Riihinen could have evened things up and sent the match into an extra hole, but his sidehill putt was a little high, which ended the match.

“I played well all round,” Riihinen said. “There were a few shots on the back that didn’t go my way. I had a couple of drives where I had to punch out. My drive on 18 took a little bit of a weird hop.

“I tried to get up-and-down from there, but I had a five-foot slider putt, and I missed it a little high. The adrenaline was running through me a little bit, and I missed it on the high side. They’re much tougher than they look especially when it comes to this competition,”

Thune did have an early lead in the match-play event, but Riihinen halved the match later on the front nine. Thune was down for most of the middle portion of the match.

“Those last few holes are what did it for me,” Thune said. “Ryan is such a solid player. “He typically doesn’t give you too much. You have to go out and earn it against him. He’s not going to hand you anything, for the most part.

Both Thune Riihinen will now set their sights on the Northwest Invitational, the tournament Riihinen won last year.

“It is what is,” Riihinen said. “I’m not too bummed. I like to look at it as just another day of golf. I played well, honestly. The driver was a little funky at times, but my iron game was strong.

“I would drop a couple of putts here and there, and that made up for my missed drives off of the fairways. I feel like I played solid all weekend long.”

Marv Vuicich, who won the senior title in 2013, returned to the winner’s circle as well with a 6-and-4 win over Jon Rue.

“I played good all weekend,” Vuicich said. “I hit the ball a ways, kept it between the trees and things worked out. I only lost four holes in four matches, and I played the same ball in all four matches, never lost a ball.

Vuicich credits his success to one thing — practice.

“My driver was working well, and my approach shots were good,” Vuicich said. “They were solid all weekend. I have been peaking, but I’ve done something this year that I haven’t done in all of my 50 years of golf, and that’s practice.

This is the first time a Super Senior Division was held, and Larry Johnson can lay claim to its first title.

Johnson beat Curt Flinck 1-up on two extra holes to nab the title.

“Today, there were some tough matches, and I had to grind it out over two extra holes,” Johnson said. “He (Flinck) played well. It was fun. We had fun matches. My game is coming around now. Hopefully, I’ll be ready for the Northwest.”

Johnson had to beat Jeff Shapiro in the semifinals. He won that match 4-and-3. With that win under his belt, Johnson said he was ready for the title match, which was only nine holes in length.

“I felt good going into the nine-hole match,” Johnson said. “I played the par threes well. I hit the pin on 15, otherwise I would have had a hole-in-one. I had a gimme on seven on the first nine, and I made a nice birdie on 11 to win the second match.

“This is my first time winning. I had been a runner up in the Northwest, and a consolation champion, so this is the first time I’ve won anything in this club.

“That feels good. It's the first time for Super Seniors, and it’s nice to win it.”

As for Flinck, he had to beat Keith Saralampi 3-and-2 in the semifinals to advance.

“I was hitting the driver well, but I missed some iron shots,” Flinck said. “My putter was great on the long putts. If you gave me a short putt, I died. It was fun. I had my chance on 10.

“I’m happy about it. I missed a few short putts, but give me a long putt, and look out.”