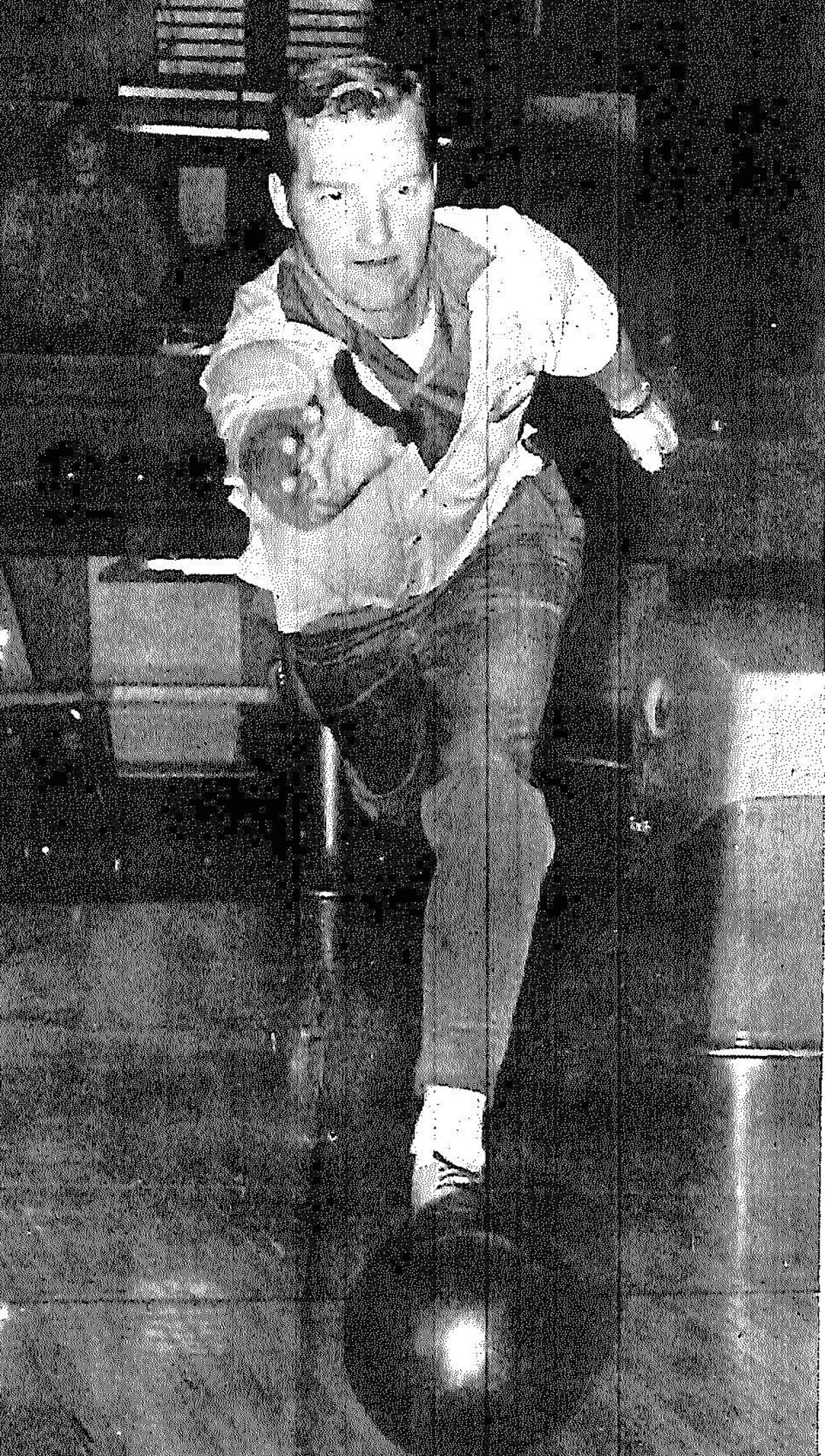 Jerry Fletcher bowled the first 300 game in Hibbing on Jan. 27, 1971. The game was thrown at Suburban Lanes. 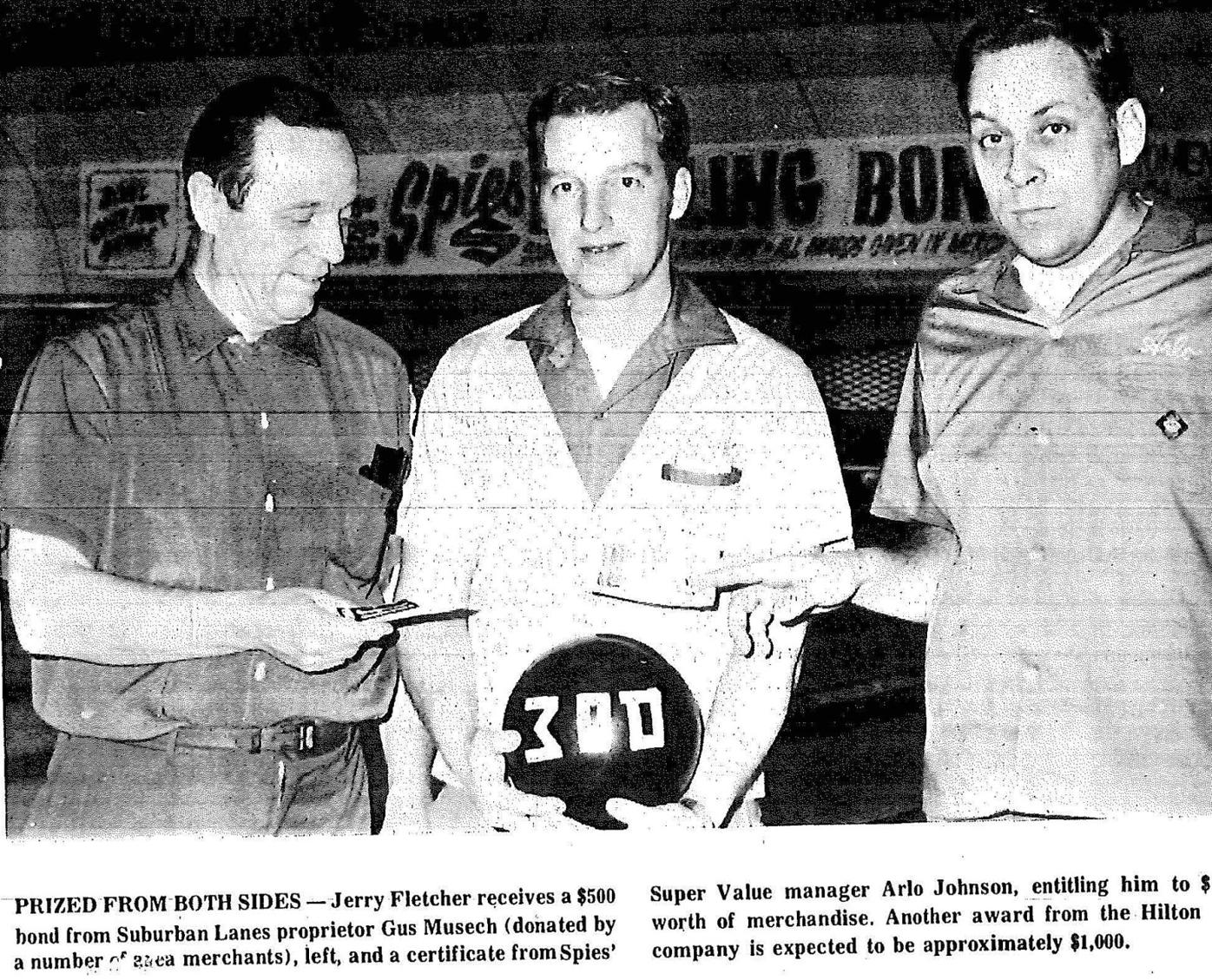 Jerry Fletcher, middle receives the prizes for bowling the first 300 game in Hibbing. At left, is the Suburban Lanes proprietor Gus Musech, and on the right is Super Value Manager Arlo Johnson.

Jerry Fletcher bowled the first 300 game in Hibbing on Jan. 27, 1971. The game was thrown at Suburban Lanes.

Jerry Fletcher, middle receives the prizes for bowling the first 300 game in Hibbing. At left, is the Suburban Lanes proprietor Gus Musech, and on the right is Super Value Manager Arlo Johnson.

HIBBING — Jerry Fletcher had just lost his wife, and he had three children at home.

Even though he was grieving, to take his mind off of the events at the time, Fletcher went bowling on Jan. 27, 1971, night at the Suburban Lanes.

What transpired that night was a first in the history of Hibbing bowling.

That was the night Fletcher bowled the first 300 game recorded in Hibbing.

Today is the 50th anniversary of the event.

Fletcher was 37-years-old at the time, and Hibbing had two bowling alleys, the Hibbing Bowling Center, which had 12 lanes, and the Suburban Lanes, which had 24 lanes.

It was during regular-league play. Fletcher was a part of the General Diesel team in the Merchant League.

He was bowling with Roger Moe, who is still living, Will Eliason, Dale Tawyea and Bernie Pierce.

“I had been bowling for quite a while. We weren’t super-excellent bowlers, but we had a good team.”

For one night, or one game to be exact, Fletcher was able to put the passing of his wife behind him, just for one moment.

“She had died two weeks before that (Jan. 11), and I had the three kids,” Fletcher said. “Who could have foreseen a 30-year-old dying. I wasn’t a babysitting authority. I was fortunate to have my mother and sister to help me take care of them.

“Without them, I don’t know what I would have done. (Bowling that 300 game) was a good feeling to help out a little bit, but to have that happen and why it did, I don’t know.”

It was an ordinary night at the lanes, and in no way did Fletcher think history was in the making.

It was the first game of the evening.

“I wasn’t an excellent bowler, but I had an odd feeling that night,” Fletcher said. “Every ball I delivered had a different feeling, but I knew they were going to be in the pocket. A lot of people start out with one, two, three or four in a row.

“With 24 teams playing that night, the farther I went, everybody was watching. It was quiet. With every ball I delivered, I had a good feeling. I had never had that previously or in the games after that. Who can explain it? It happened. It was a crazy time.”

Once his string got to seven, eight and nine, more attention was focused on his lane.

When the 10th frame came up, Fletcher had three more opportunities to close out perfection.

“I was kind of in a daze,” Fletcher said. “You don’t want to throw one in the gutter. The hits were good. There were no sloppy hits. When I hit the last one, I fell down. I was lucky I didn't fall on the lane.

“I got through it. It was amazing. I’ll never get over what it created. The people around me were super about it. After that, I fell down a little bit, but I was so shook up. Everybody was going crazy. It just happened.”

It was at that moment that Fletcher came back to the reality that his wife was gone.

“Kysar Bukovich came up to me and said, ‘Your wife knows,’” Fletcher said.

Before it became official, Fletcher had to get the game sanctioned.

Kenny Lund filled out all of the paperwork.

“It was a lot of work,” Fletcher said. “All of the pins had to be taken out and put away. They had to weigh each pin. They had to be at a certain scale of legality before it could be sanctioned. I still have the shoes and the ball (a Brunswick). Don Carter signed the certificate.

“WDIO sent a couple of people up that night.”

Fletcher said that General Diesel put on a big evening at the Androy Hotel.

“With all of that bowling going on, nobody had rolled one,” Fletcher said. “People still talk to me about it.”