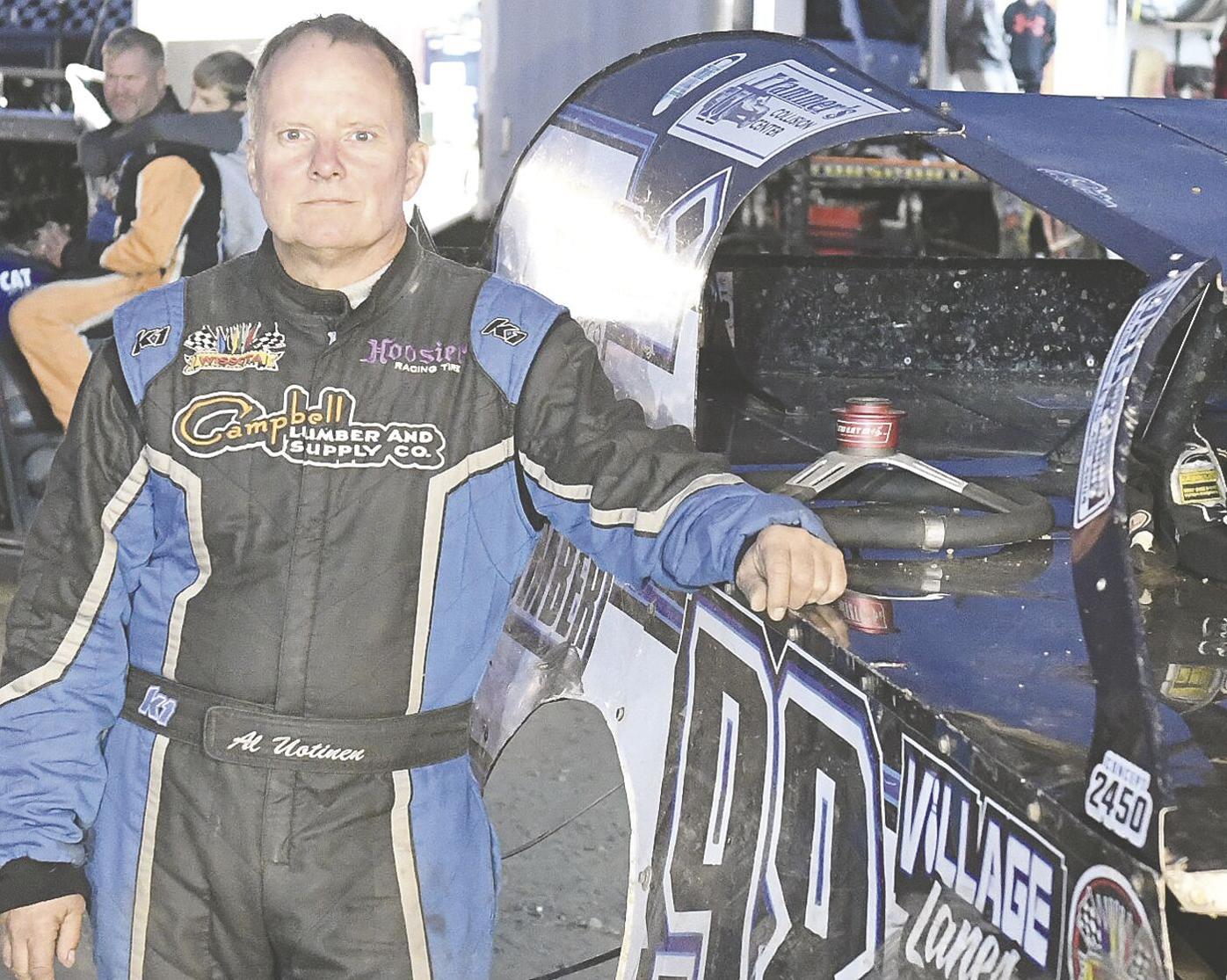 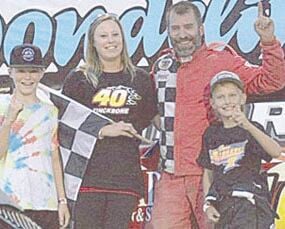 Chad Finckbone (second from right) won the Pure Stock title at the Labor Day Shootout Sunday at the Hibbing Raceway. 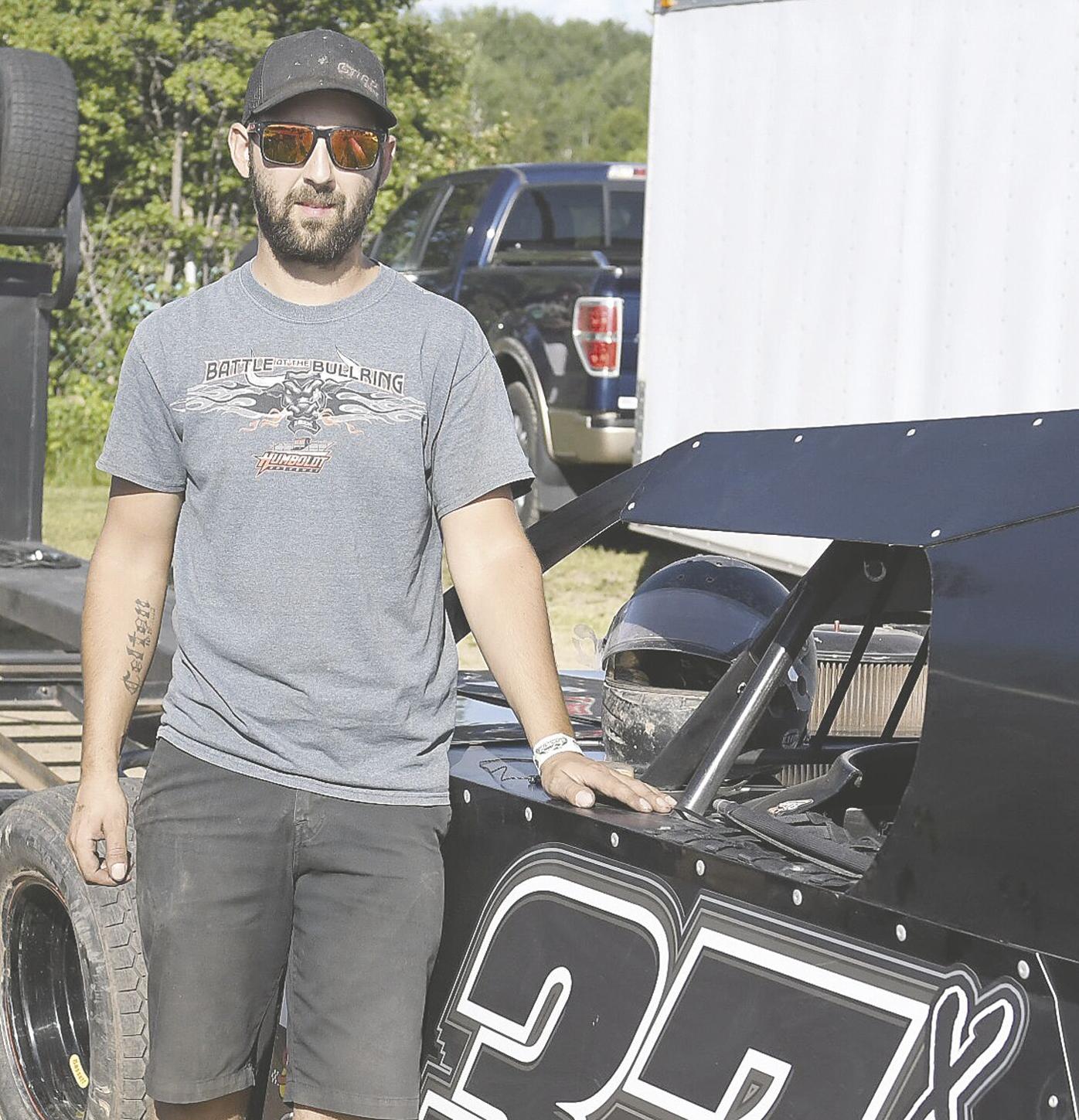 Skeeter Estey won the Midwest Modified titles at the Hibbing Raceway during the Labor Day Shootout Saturday and Sunday. Estey won on Sunday. 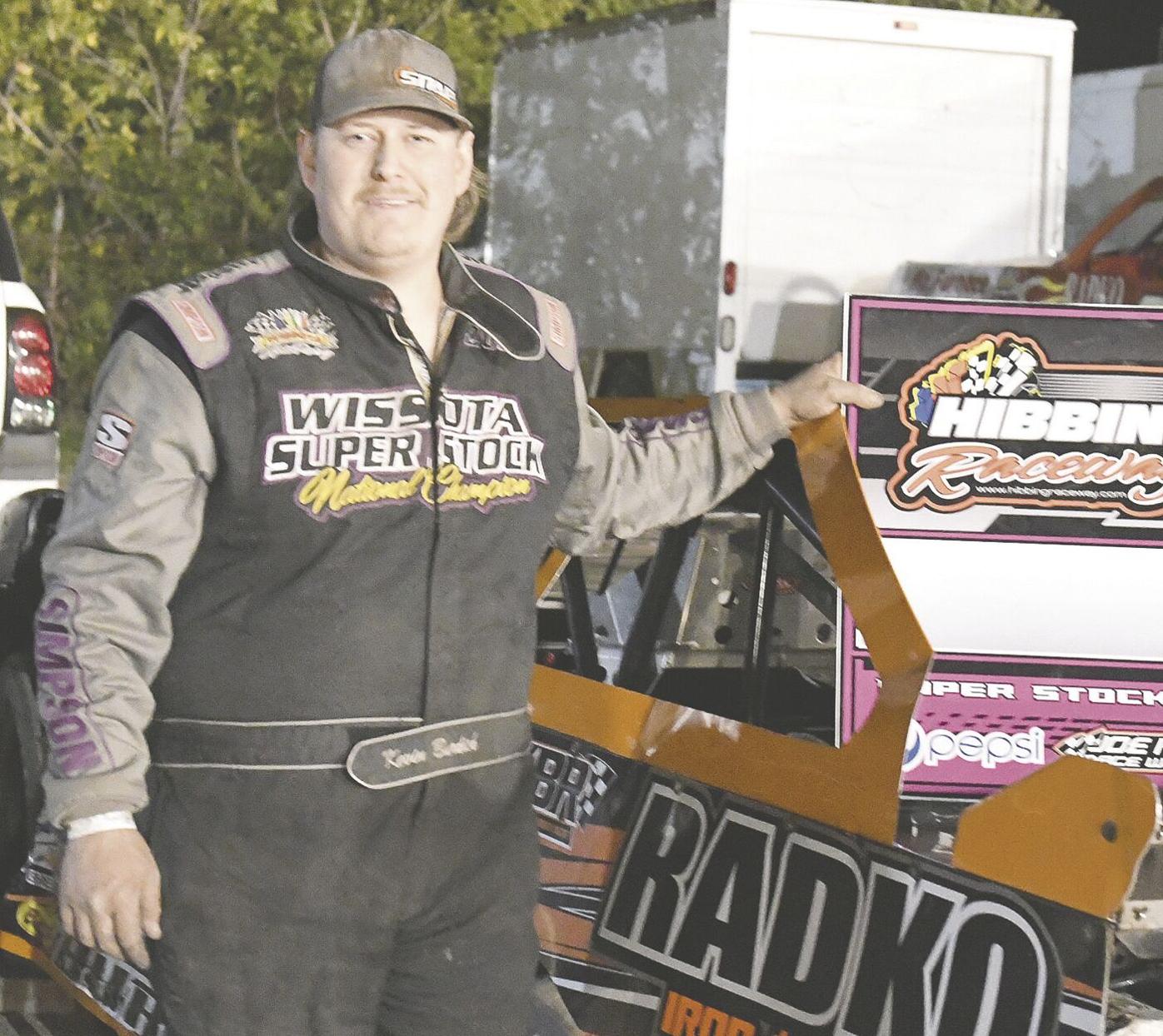 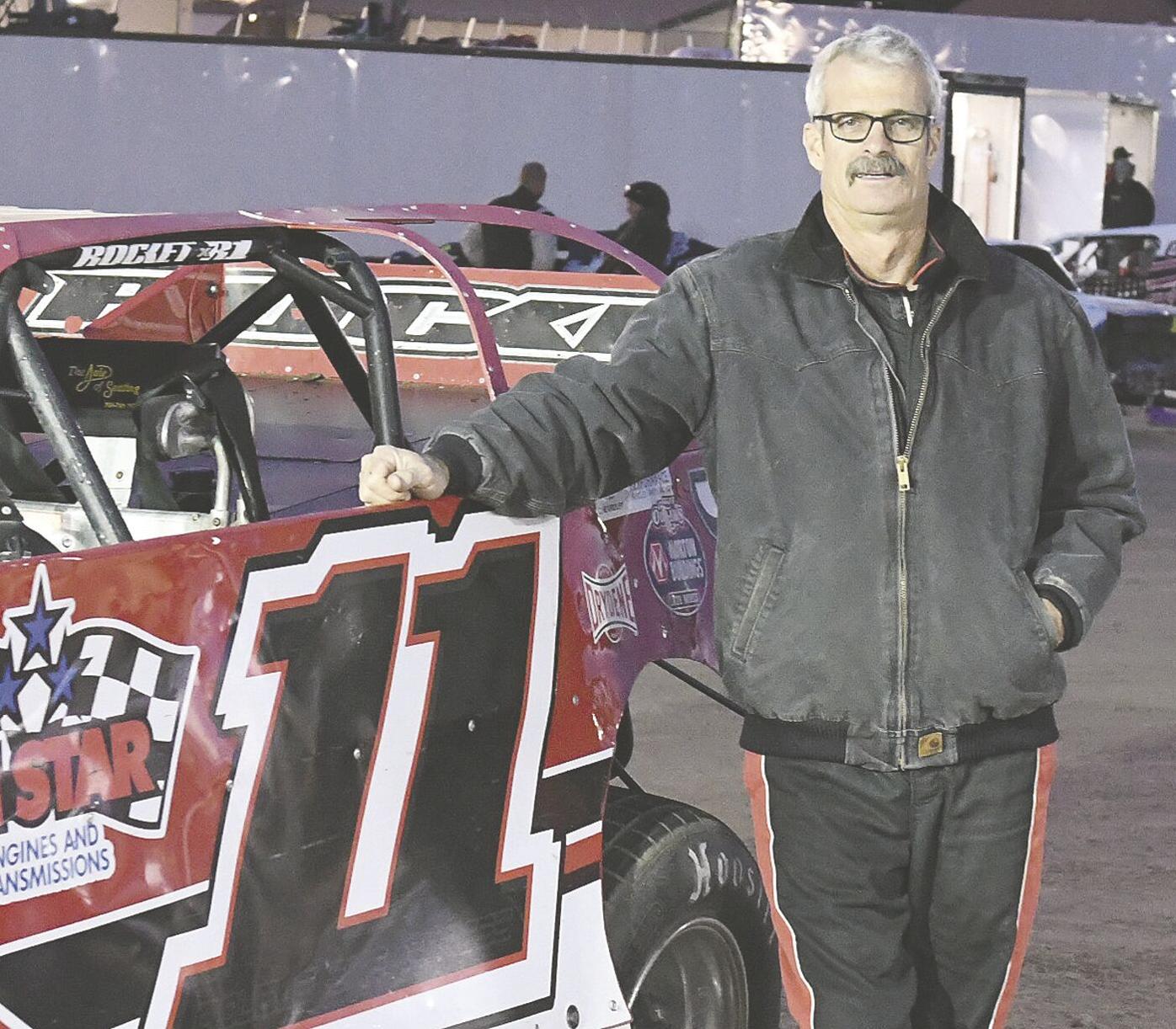 Chad Finckbone (second from right) won the Pure Stock title at the Labor Day Shootout Sunday at the Hibbing Raceway.

Skeeter Estey won the Midwest Modified titles at the Hibbing Raceway during the Labor Day Shootout Saturday and Sunday. Estey won on Sunday.

HIBBING — Some familiar faces returned to Victory Lane at the 42nd annual Labor Day Shootout held Saturday and Sunday at the Hibbing Raceway.

Pat Doar won his seventh and eighth Late-Model features, and with one win each in Modifieds and Super Stocks, Doar has 10 titles altogether.

There were three newcomers to the mix.

Doar, who is from New Richmond, Wis., said it took a little luck to get this win.

“My car was decent, but in my heat race, one of the guys who is fast, had trouble in the heat in front of me,” Doar said. “That helped me gain some extra passing points. We did the crazy draw thing by the grandstand.

“My close, personal friend, Kyle Peterlin, gave me the two, and that was a big deal.”

That draw allowed Doar to start on the outside of the pole, which helped him get an early lead.

“You have to take advantage of that when you can,” Doar said. “Nobody is going to wait for you, or hold the door open for you. It was maneuverable for 30 laps. At the end, I was hanging on.

“The race ended at the right time. Had we gone another half of a lap, I would have run second.”

On the second night, Doar started near the front, but not in the front row. He worked his way to the front for the sweep.

“We’ve had good luck over the years up here,” Doar said. “I’ve been coming here a long time. I started coming up here in 1992. I’ve missed a few, but not very many.”

Not bad for someone who said he’s been struggling the last month of the season.

“It’s been different things,” Doar said. “Messing up the set-up on the car. It’s tough to do the right thing on these cars. There’s so many adjustments. If you wouldn’t touch them at all, it would probably work out in your favor.

“We also had some stuff break while we were racing, just normal stuff that breaks sometimes. We had a long month of one thing after another. It’s no big deal, but we got it right. It’s nice to get a win. It keeps you from buying bowling shoes.

Uotinen, who is from Superior, usually visits Hibbing just over the Labor Day weekend, and he made this visit count.

“We’ve had a few good runs here, but we’ve had a lot of bad luck here, too,” Uotinen said. “Prior to Saturday, my best finish was second. That win was special.”

What have been the struggles?

“We always run well here, but we wreck a lot, too,” Uotinen said. “We’re in the wrong place at the wrong time. Everything fell into place, and I was able to pull it off.”

Uotinen said he started in the back during his heat race, but he gained enough passing points to move up.

“We started seventh and made it to third, which gave us a good position with the passing points,” Uotinen said. “In the redraw, one of my competitors, Sabraski, he drew No. 1, and handed it to me. I was on the inside pole for the feature. “That meant a lot that night. That’s what fell into place.”

“When that green (flag) came out, I never saw another car the rest of the night until I came upon the lapped cars,” Uotinen said. “I was good in corners one and two. I didn’t feel as well in three and four, but I was better than the other people in three and four.

It was Sabraski’s night on Sunday. The Rice, Minn., native said he gets two chances every Labor Day weekend, and even though he didn’t win with his Super Stock, he pulled away for the Modified title.

“We started in the front row for the feature, and it’s nice starting in the front,” Sabraski said. “I didn’t want to make any mistakes. I didn’t feel much pressure, so I didn’t know what was going on behind me.

“I didn’t see anybody pull up alongside me, so that put me more at ease. This one feels good. I had this car last year, and we won National points with it. It’s been a good car.”

Even though Burdick is a veteran driver and has won many titles, he said this victory was the biggest one of his life.

His in-laws, Bill and Carrie Matzdorf, were in an auto accident, so Burdick’s mind wasn’t necessarily cued into racing.

“It’s been a rough weekend,” Burdick said. “I haven’t been motivated to be here. I want to be with them, but I can’t. It was tough. It took a little while to get some motivation. We kept plugging away, working on the car getting it ready.”

Burdick is always tinkering with his car to make it better, and he hit on all cylinders this weekend.

“We made a small adjustment before we went out for the feature, but this car is still new to us,” Burdick said. “It can be a lot better, yet.”

Burdick started on the inside pole position, but he got passed by Curt Meyers on the first lap. Burdick got the lead back and cruised to the win.

“I didn’t know what the track was like,” Burdick said. “I was running the bottom, but I never got a chance to run the top. He showed himself again on the top, so I changed my line and started running the top in turns three and four.

“There was a lot of bite up there.”

“All these titles are special,” Burdick said. “You never know when it’s going to be your last race to win.”

Estey continued his dominance in the B-Mods, and he credits the car, the people that work on the car and even the track for his success.

“The cars are amazing, and the hometrack advantage helps,” Estey said. “I have a lot of laps around this place. With the passing points, that put us out front for the feature, and clean air is big. That helps a lot, too.”

The only problem was that the race had six cautions, which took away some of Estey’s momentum.

He tried his best to stay focused.

“It takes a little bit to get back in the rhythm of things, but once I get a few laps going again, I get comfortable again,” Estey said. “It throws you for a loop, but you have to hit your marks and make every corner the same.”

Estey joined some elite company with his ninth feature win.

“They’re all huge,” Estey said. “Pat got his ninth and 10th, so he’s the all-time winner. To keep pace with somebody like that is awesome.”