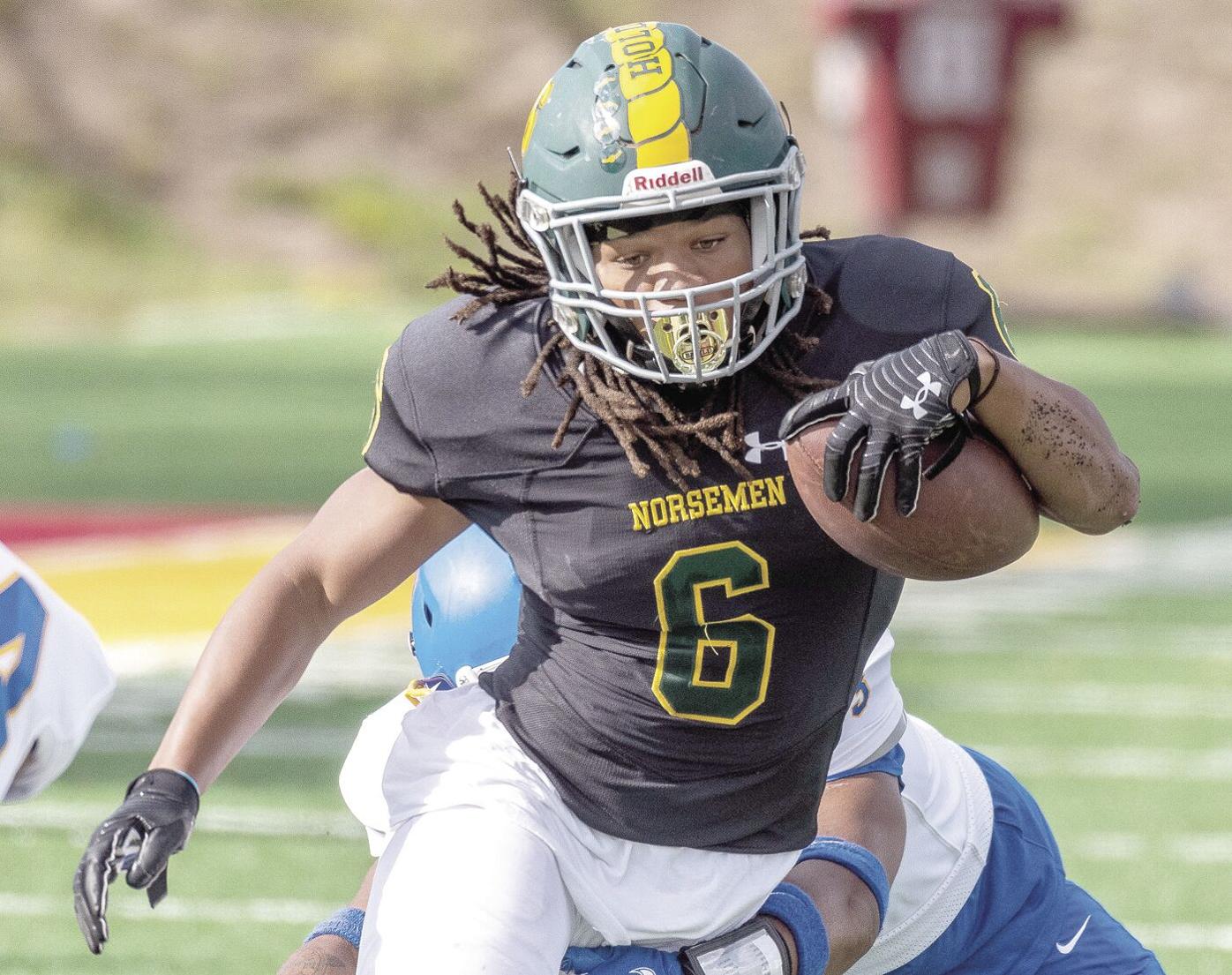 At left, Mesabi Range’s Montrellis Wilson breaks away from Vermilion’s Camron Allen for a touch down run in the second half of Saturday’s game in Mountain Iron. 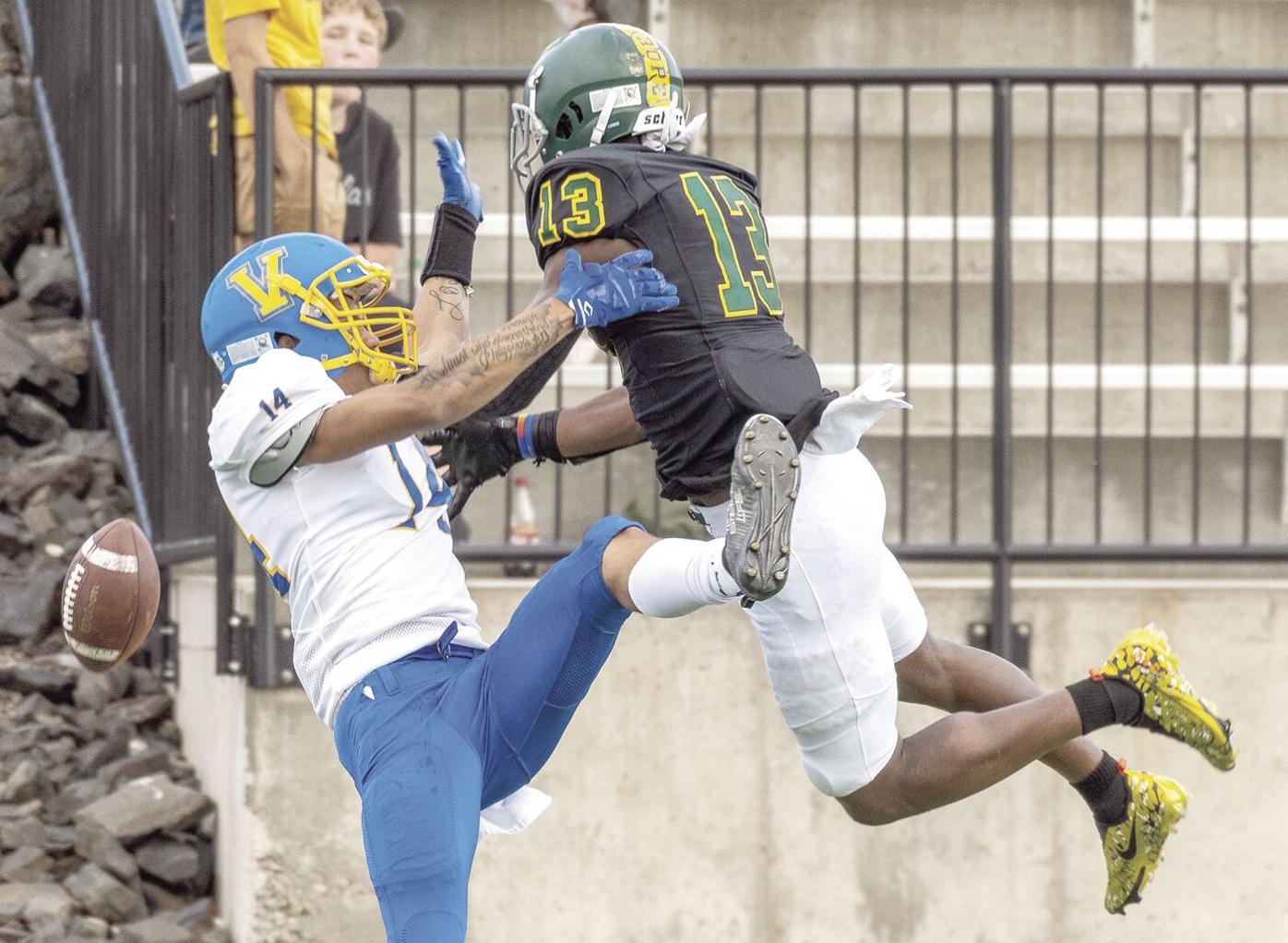 Vermilion's Qyaydrain Fraizer breaks up a pass intended for Mesabi Range's Andreus Griffin during the second half. 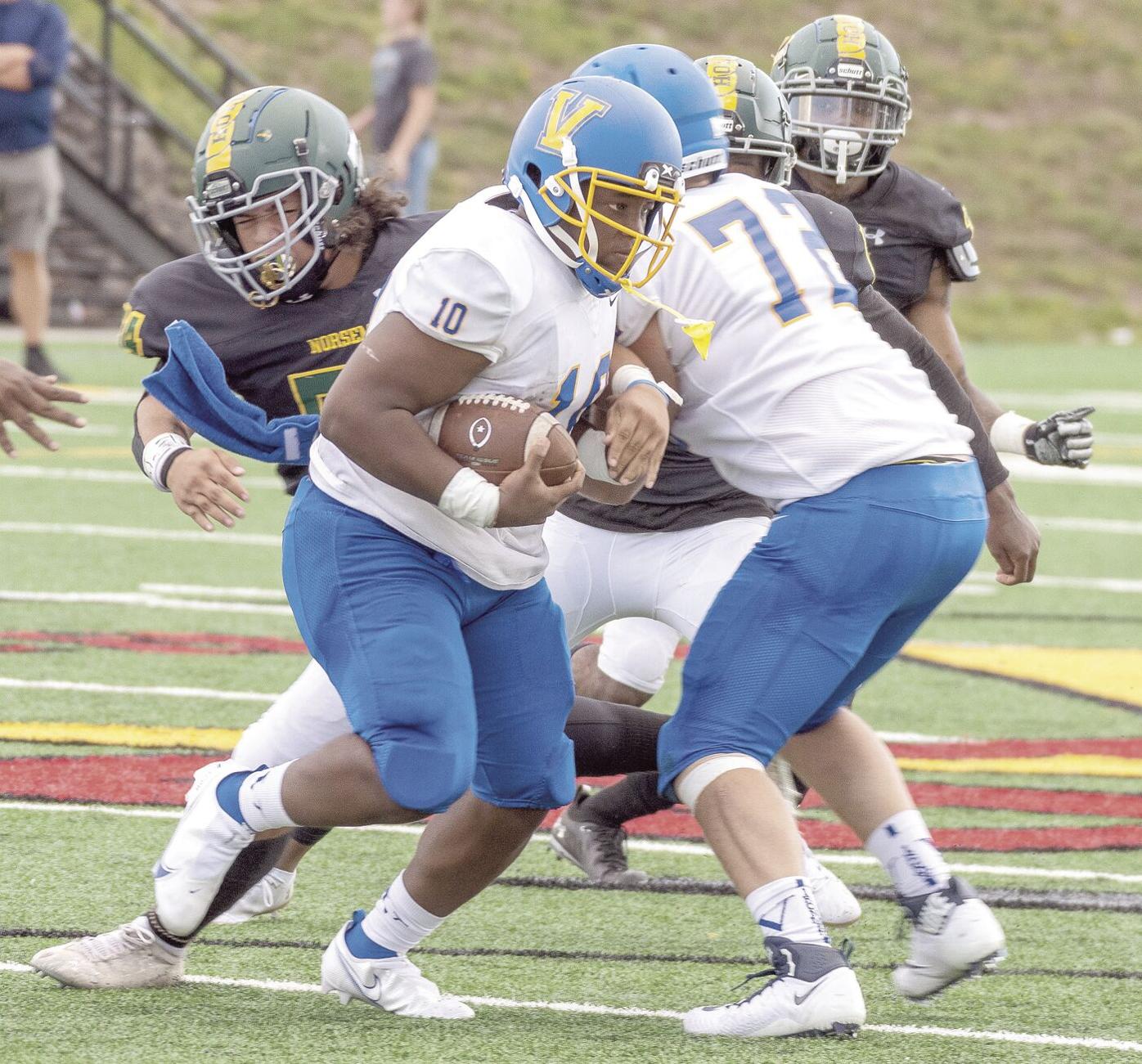 Vermilion quarterback Keith Baker keeps the ball and scrambles for a first down during the second half of Saturday’s game against Mesabi Range in Mountain Iron.

At left, Mesabi Range’s Montrellis Wilson breaks away from Vermilion’s Camron Allen for a touch down run in the second half of Saturday’s game in Mountain Iron.

Vermilion's Qyaydrain Fraizer breaks up a pass intended for Mesabi Range's Andreus Griffin during the second half.

Vermilion quarterback Keith Baker keeps the ball and scrambles for a first down during the second half of Saturday’s game against Mesabi Range in Mountain Iron.

After losing to Rochester the week before, Ironman coach Terrence Isaac Sr. said it was important for his team to get that first win of the season.

“It was good for our guys, especially the young guys,” Isaac Sr. said. “We’re still working on getting them to gel.”

The Ironmen started the scoring when Terrance Isaacs Jr. scored on a 32-yard pass from Dentrell Session.

That, according to Isaac Sr., was just the remedy his team needed against their rivals from Virignia.

“I thought that was important for our confidence,” Isaac Sr. said. “We needed to get them confident moving forward in the game.”

In the second quarter, Maximus McArthur scored on a three-yard scamper to make it 12-0.

But Isaac Sr. knew that the Norsemen would make a run at his team, and they did when Mesabi Range got a 79-yard scoring strike from Charels Fiuza Jr. to Andreus Griffin to make it 12-7.

Vermilion countered with an 80-yard kickoff return by Breaton Vann to take a 19-7 lead into halftime.

It was a good response after giving up that long touchdown pass.

“We knew we had to play a full game, no matter what,” Isaac Sr. said. “We knew Mesabi would keep coming back on us. It’s been that way since I played here in the 1990s.”

Mesabi Range fought back with a 40-yard pass from Fiuza Jr., to Montrellis Wilson in the third quarter to make it 19-13.

Vermilion blocked the extra-point attempt and it was run back for two points by De’vonte Roberts to make it 21-13 heading into the fourth quarter.

The Ironmen responded with another kickoff return for touchdown, this time Quaydrain Fraizerm who rambled 85 yards for the score and it was 34-20.

Vermilion’s special teams play was a far cry from the week before against the Yellowjackets.

“Those two runbacks were extremely important,” Isaac Sr. said. “We struggled against Rochester on special teams. We worked extra hard to clean up some things, and the guys responded.”

On the Norsemen’s next possession, Wilson caught a 13-yard pass from Fiuza Jr. and it was 34-27.

Session capped off the scoring with a 1-yard run.

McArthur rushed for 106 yards and a score. Isaac Jr. had 109 in six receptions and a touchdown.

Joseph Turay had 66 yards on the ground. Wilson caught 13 passes for 132 yards and two scores. Griffin had 124 yards in four receptions. He scored two touchdowns.

Vermilion will travel to Grand Rapids to take on Itasca Saturday, beginning at 2:30 p.m.