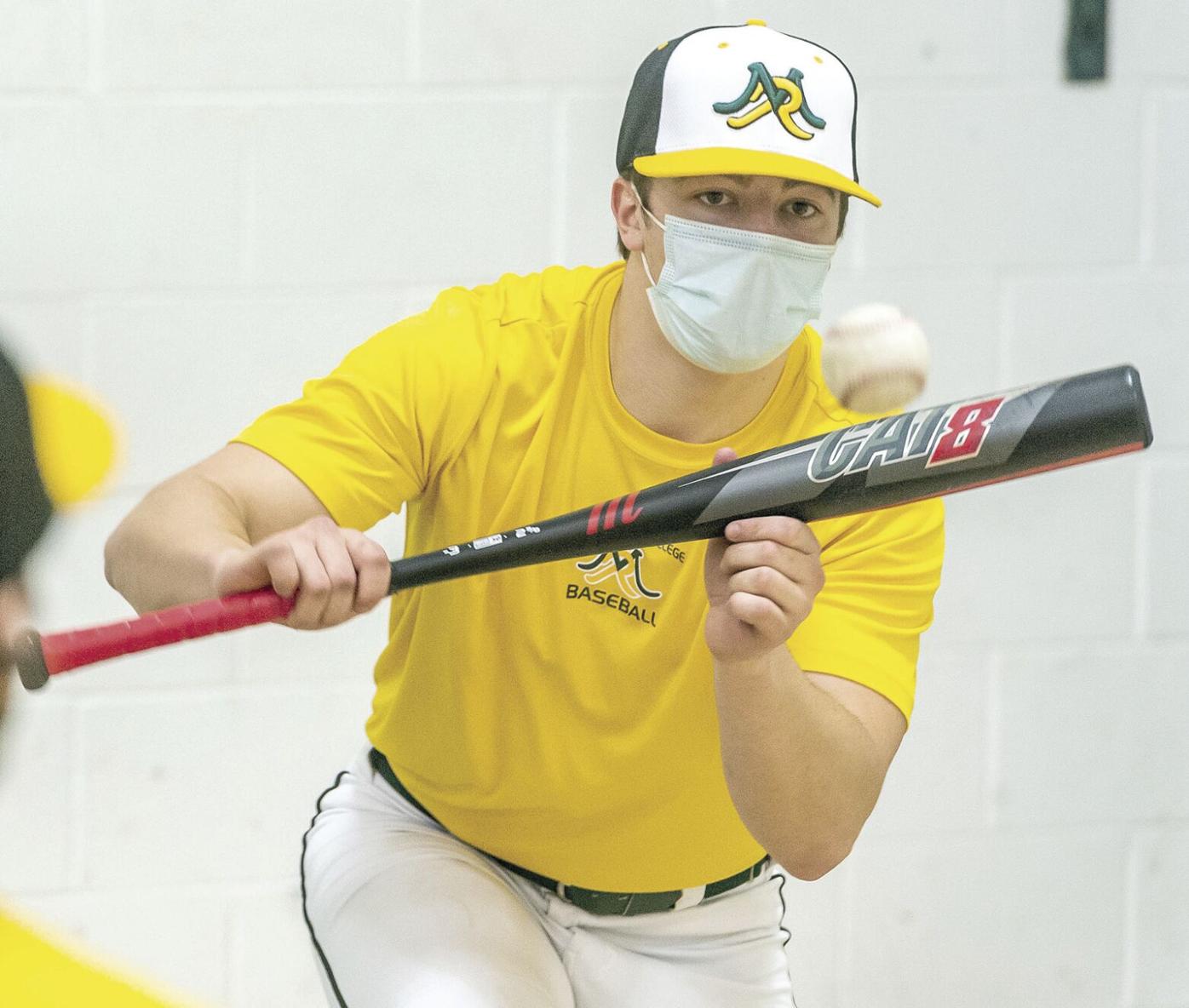 Mesabi Range College players loosen up and shake off the off season rust with some bunting drills at the start of practice Monday evening in Virginia. 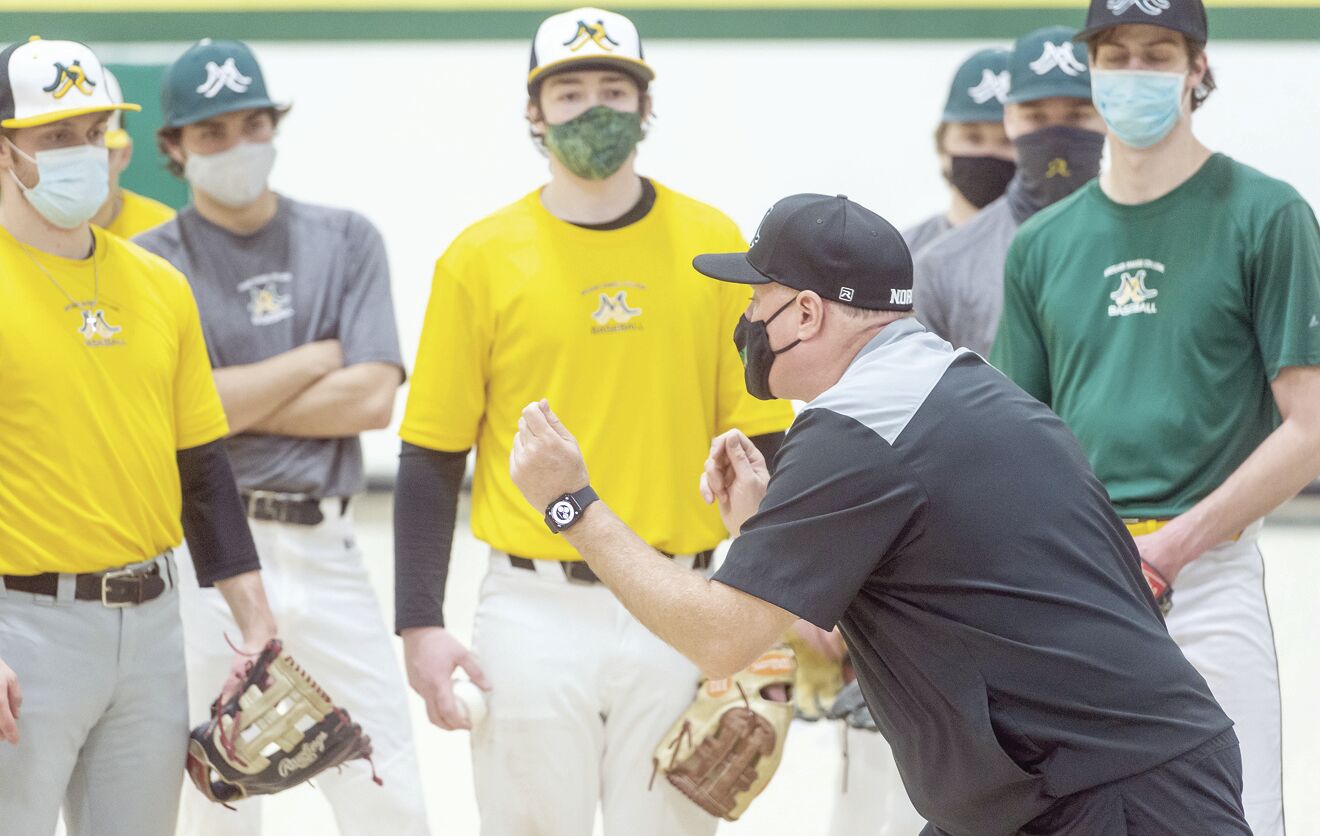 Mesabi Range College players loosen up and shake off the off season rust with some bunting drills at the start of practice Monday evening in Virginia.

VIRGINIA — Nearly a year after Mesabi Range College’s 2020 baseball season was cut short by the coronavirus pandemic, the bats, balls and gloves were out again Monday.

Head coach Chris Vito was taking his players through their paces in the batting cage, bunting drills and more inside the William Wirtanen Gymnasium in Virginia.

The pandemic wiped out everything in 2020 except the team’s annual early March spring training trip to Florida.

The means there was no fall baseball either to get the team ready for the 2021 season. From what Vito can tell, his returning players and new recruits came back in good shape.

“They did a lot on their own. I was very impressed with the job they did.’’

Looking at his roster, the coach said this year’s team really loves and enjoys the game and wants to be around baseball.

“I think everybody's just raring to go. This is where it gets real,’’ Vito said.

The coach said the roster is a bit smaller than he would like, but there is competition at all the spots. “We’ve got kids the push each other, which is important.’’

Kisch, a right-hander, will lead the way for the Norse on the mound this season.

“Kisch will be our top guy coming back. He knows how to pitch. When he doesn't’ have his best stuff, he still manages to get through it.’’

Righty Jack Kelly struggled in the only outing he had in Florida last spring, but Vito still remains confident in him. “I know how hard he’s worked. I’m anxious to see what he’s capable of.’’

Lefty Rob Parendo is another pitcher that has worked hard in the offseason for Mesabi Range.

“I’m looking for good things and leadership out of all three,’’ Vito said.

Behind the plate, Noah Paulseth of Apple Valley will lead the way. “He was solid last year as a freshman’’ and did well in the short season, the coach said. Paulseth recently committed to play baseball at the University of Wisconsin-Eau Claire next fall.

Other returners include Mesabi East’s Trent Braaten, who “hit the ball fairly well for us last year.’’ The coach added the second baseman does a nice job going the other way at the plate.

Blake Warner of Hastings will play primarily shortstop gaining last year’s eligibility back due to the pandemic.

“He’s a smooth infielder for us,’’ who is a good hitter and a leader.

Vito is also expecting good things from Virginia graduate Ryan Hujanen on the mound and the infield. With Hujanen being such a good athlete, he might also play in the outfield.

“We’re really excited about Cole Meyer and what he brings to the table as well.’’ Listed as an outfielder/catcher, Mesabi East’s Meyer bats left and throws right. He also has the ability to move around wherever he is needed, Vito said.

The team as a whole has the ability to play different positions, which is definitely a benefit, he added.

The Norsemen are planning to open the season on March 19 at the St. John’s junior varsity. However, Vito said he is trying to move the club’s April 14 doubleheader with Century College to earlier in March at US Bank Stadium in Minneapolis, which could end up being the season opener.

Mesabi Range will be playing its games at Stock Field in Virginia and also at the new turf baseball field at Mesabi East High School in Aurora.