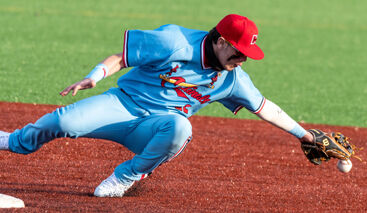 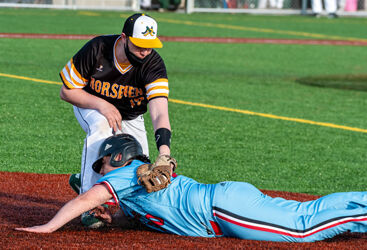 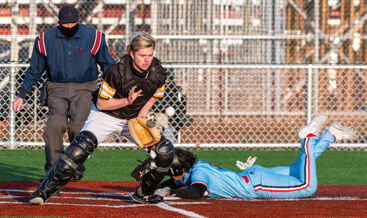 AURORA — Trailing 3-2 after 1½ innings complete, Mesabi Range broke out to score eight of the next 12 runs in a 10-7 win over Hibbing at the Mesabi East baseball field Monday night in game one of a doubleheader.

In game two, the Cardinals found their groove at the plate to down the Norsemen, 12-4.

In the opener, Mesabi’s Dawson Tweet led the way with four hits and two RBI as the Norsemen put up three runs in the second, two in the third and three more in the sixth to put the game away.

Tweet singled and scored in the first and Jackson Bode added a hit to give Mesabi Range a 2-0 lead after the opening frame, which had several Cardinal miscues.

Hibbing responded to take a 3-2 lead in the second after the Norse had a few miscues of their own. After the first Cards run scored on an error, the second came on a bases-loaded walk and Hibbing got their final run off a sacrifice fly from Cory Wolters.

The Norsemen had a solid second frame, which started with walks to Tweet and Bode. The bases were loaded after a Konrad Kisch single to left and a bases-loaded walk made it 3-3 with two down. Noah Paulseth proceeded to smack a 2-RBI single to left and Mesabi led 5-3 after two.

Mesabi’s starting pitcher Ryan Hujanen kept the Cards off the board in the third before Mesabi Range tacked on two more in the bottom half of the third to make it 7-3. Tweet came through again with a single to right field, which went under the outfielder’s glove and all the way to the fence, which scored Cole Meyer from first. Bode followed that up with a perfect bunt that brought home Tweet from third.

Hibbing made things interesting in the fourth as Hujanen walked leadoff batter Ariel Gonzalez and gave up a bloop single to short center field to Hunter Levander. Hujanen issued another walk before a bases-loaded bloop single by Wolters made it 7-4. Two more bases-loaded walks and the Cardinals were within one at 7-6. Zach Nelson came on in relief to get the final two outs after Meyer grabbed a deep fly at the fence and the Hibbing runner was doubled off third base to preserve the one-run lead after four innings.

After a scoreless fifth inning, Nelson struck out all three batters in the sixth to keep the home team’s advantage at 7-6.

The bottom of the sixth proved to be a big one for the Norsemen. Kisch was hit by a pitch, Trent Braaten singled to left center field and Paulseth reached on a bunt single. Max Grundhofer then stepped to the plate with the bases loaded and delivered a single to left for an 8-6 lead.

Two strikeouts later, Tweet stepped to the plate and smacked a shot to deep center field, which was mishandled and allowed two Norsemen runs to reach home for a 10-6 lead.

Nelson gave up a single in the top of the seventh to Robert Rodriguez and hit a batter before Carter Pickard delivered a single to right for one Hibbing run.

However, Nelson proceeded to fan the final two batters to secure the 10-7 Norsemen victory.

Rodriguez ended the game with three hits for the Cardinals, while Wolters had one hit and two RBI. Cole Cobb added one hit and one RBI and Jake Miller and Levander each chipped in with a hit.

Codeih Powers took the loss for Hibbing. He went 1 ⅓ innings and gave up four runs on two hits, while striking out one and walking two.

The Cardinals responded in the second game of the doubleheader with a 10-hit, 12-run effort to down the Norsemen, 12-4.

Noah Vinopal, Ariel Gonzalez and Carter Pickard each had two hits to lead the Hibbing attack. Vinopal knocked in three runs by bashing a homer and Pickard plated two Cardinals.

Hibbing led 5-1 heading into the seventh inning before exploding for seven more runs to take a 12-1 lead. Mesabi added three runs in the seventh, but could not complete the rally.

The Cardinals also got a double and two RBI from Caden Willis, while Gavin Constantine, Hunter Herpel and Sean Bonner each added one hit and one RBI.

Mesabi Range, meanwhile, was paced offensively by Tweet. He came up with four hits, including a double, and one RBI. Max Grundhofer added one hit and one RBI, while Paulseth added a double. Cole Meyer added a hit and two RBI.

Wolters picked up the win on the hill after going five innings, striking out seven and walking five. He allowed one unearned run on three hits. Reliever Ryan Vondracek went two innings, allowed three runs on four hits, fanned two and walked one.

For Mesabi Range, Gabriel Soto took the loss after hurling six innings, giving up five earned runs on seven hits, striking out eight and walking two. Matt Costa came on in relief to pitch the final inning. He gave up seven earned runs on three hits, while fanning one and walking five.