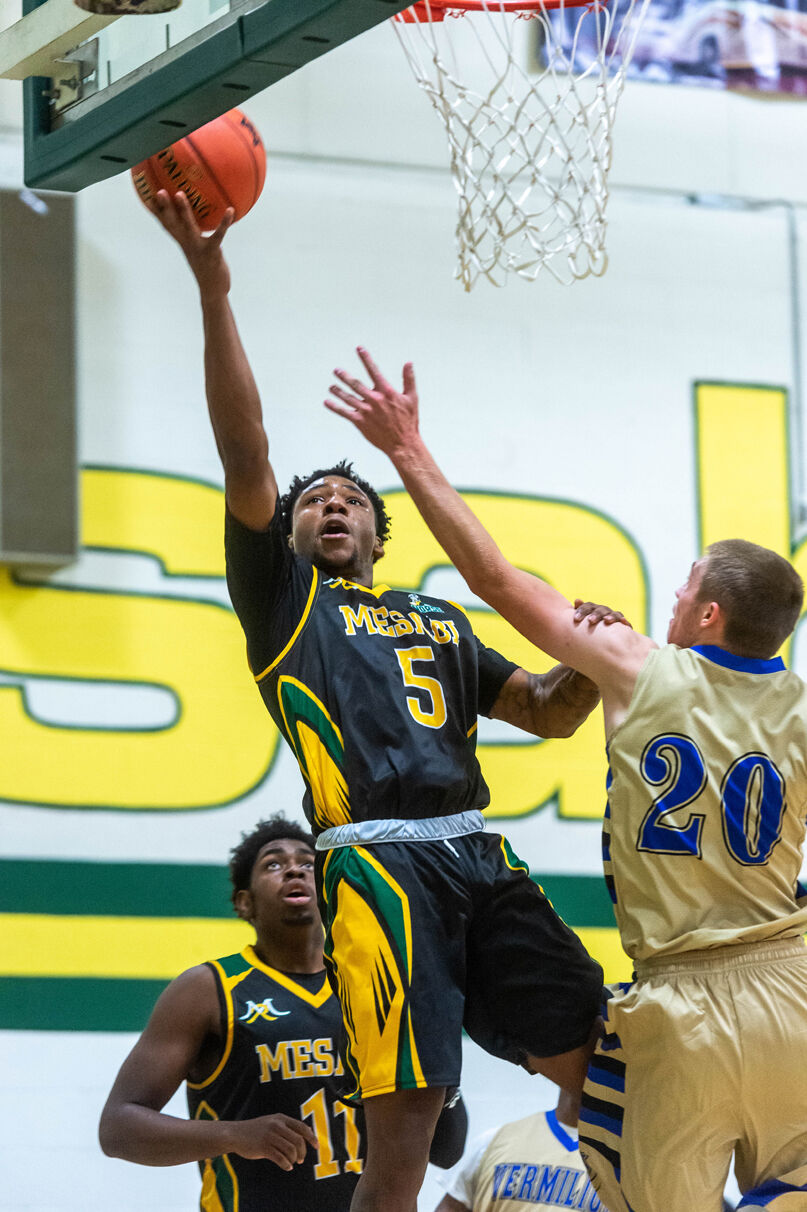 Mesabi Range's Nataj Sanders goes to the basket against Vermilion's Austin Funk during the first half of Wednesday's season opener in Virginia. 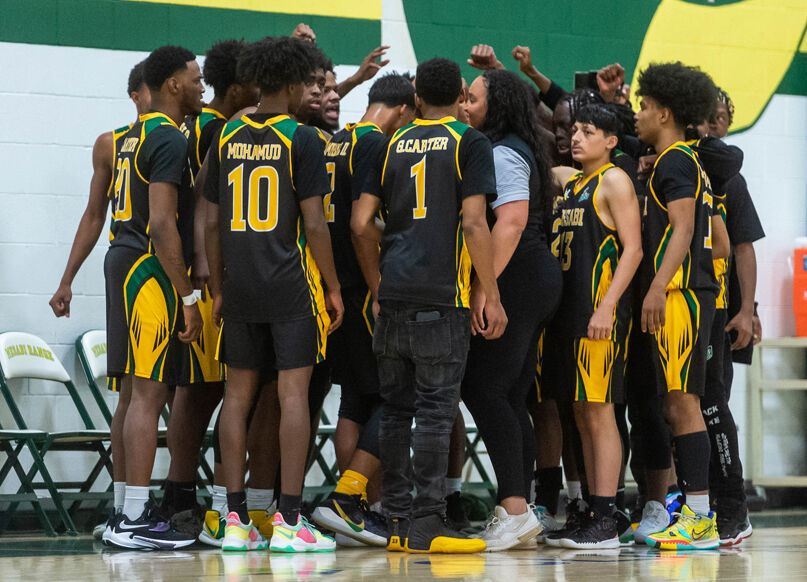 Mesabi Range College head coach Tamara Moore talks to her team during a time out in the first half of Wednesday night's season opener against Vermilion in Virginia.

Mesabi Range's Nataj Sanders goes to the basket against Vermilion's Austin Funk during the first half of Wednesday's season opener in Virginia.

Mesabi Range College head coach Tamara Moore talks to her team during a time out in the first half of Wednesday night's season opener against Vermilion in Virginia.

VIRGINIA — It was 19 months in the making, but Mesabi Range head men’s basketball coach Tamara Moore finally got to step on to the floor at William Wirtanen Gymnasium and coach the Norsemen for the first time.

The result? A dominant 91-63 performance from her team over the visiting Vermilion Ironmen Wednesday night.

Mesabi Range played up their diverse offense and used a lockdown defense in the first half to lead 46-19 at the break. In the second half, the Ironmen found their footing but the Norse answered in every way they needed to earn the win.

After playing a pair of scrimmages prior to their opener, Moore had an idea her team would come ready to play against Vermilion.

“We played against some nationally ranked prep schools in scrimmages before this and we knew right there that we had some solid pieces,” Moore said. “We’re excited about what this program can be. We had a whole year off last year but we stayed with it, brought in some new pieces and we’re excited to keep it moving and see what’s possible.”

A steal and a layup, followed by a three-pointer and then a completed three-point play all from Sanders got the Norsemen up early. Vermilion’s Kallum Gaddis knocked down a three to get the Ironmen moving but a quick response from the Norse’s Johnny Spencer in the paint made it 10-3.

Mark Campbell II was next to score on a Euro step just before Spencer picked up a steal and answered on the opposite end with a layup, 14-3. The early deficit forced Vermilion head coach Reed Petersen to take a timeout.

Mesabi Range continued to attack Vermilion while on defense which resulted in 17 first half turnovers that turned into 24 points off said turnovers.

Julian Beltre and Louis Carter kept the Mesabi Range offense churning midway through the first half as the lead continued to widen.

Later up 39-17, a layup from Campbell followed by a three from Ziaire Davis made it a 27-point game, 44-17. A late steal and layup from Mohammed Mohamud capped off the first half scoring for the Norse, 46-19.

Sanders and Campbell led the Norse at the half with 12 points each.

On her team’s standout defensive effort in the first half, Moore said that’s the exact type of play she wanted to build her team around.

“That’s our calling card,” Monroe said. “That’s my calling card. Anyone that knows me, even as a player, I’m a defensive player. I want that to be what our team is known for. Defense is something I want us to bring to the table all season long.”

The Vermilion offense found its footing in the second half while the Norse let off the gas somewhat on defense. Still, Mesabi Range never let the contest get close as they answered the Ironmen almost point for point.

Vermilion’s Ronald Ducros came up with a big second half, scoring 16 of his 18 points in the final 20 minutes. Scoring the Ironmen’s first 10 points of the second half, the Norse answered back with big plays from Beltre and Davis to keep the lead healthy.

Spencer, Davis, Beltre and TQ Wair all got in on the second half action as the Norse led by 30, 72-42, with nine points to play.

Mesabi Range closed things out late with a quick five points from Wair, putting the final score at 91-63 when the dust settled.

Sanders led Mesabi Range with 16 points. Campbell finished with 14. Davis had 14 and Spencer had 10 putting four of the five Norse starters in double figures.

Ducros led all scorers and Vermilion with 18 points. Mason Bennett finished with 10 points.

With nearly a dozen players recording a bucket in the season opening win, Coach Moore says she has trust and confidence in every one of the players on her roster and utilizes what she calls a “positionless system.”

“Everybody can do a little bit of everything,” Moore said. “My bigs can shoot the three, my guards can penetrate, my point guards can get in the inside. I think it’s a strong system and we already have 15 plays for us to use.

“The biggest thing is knowing that everyone can bring something different on any given night. It’s something special with this team. Defensively, we want to continue to be where we are and we’re so excited that we have the pieces that we have.”

Game one in the books Moore said the sights and sounds of the season opener were memorable ones.

“I love seeing the crowd come out wearing all black for our blackout night. The team came together today. We have guys who haven’t played a game in a long time and seeing what they did out here in the first game, it makes me more excited that they finally got a chance to play.”

Mesabi Range will take on Bay College (WI) on Saturday at 3 p.m. with Moore encouraging the crowd to return even larger.

“We’d love to see even more people come out. The first one was great and it’s exciting to see the future of Mesabi Range basketball. We’re looking forward to Saturday.”