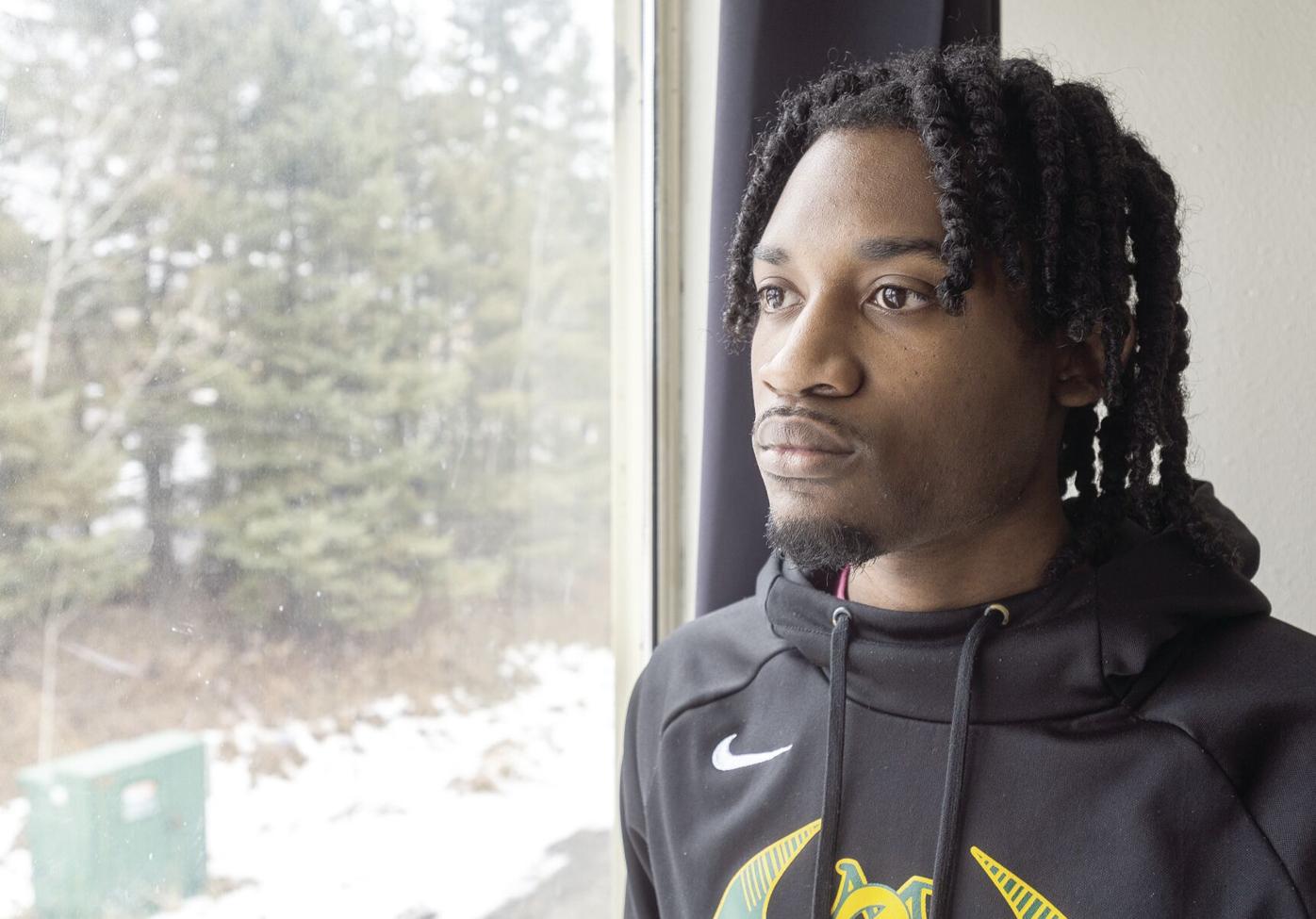 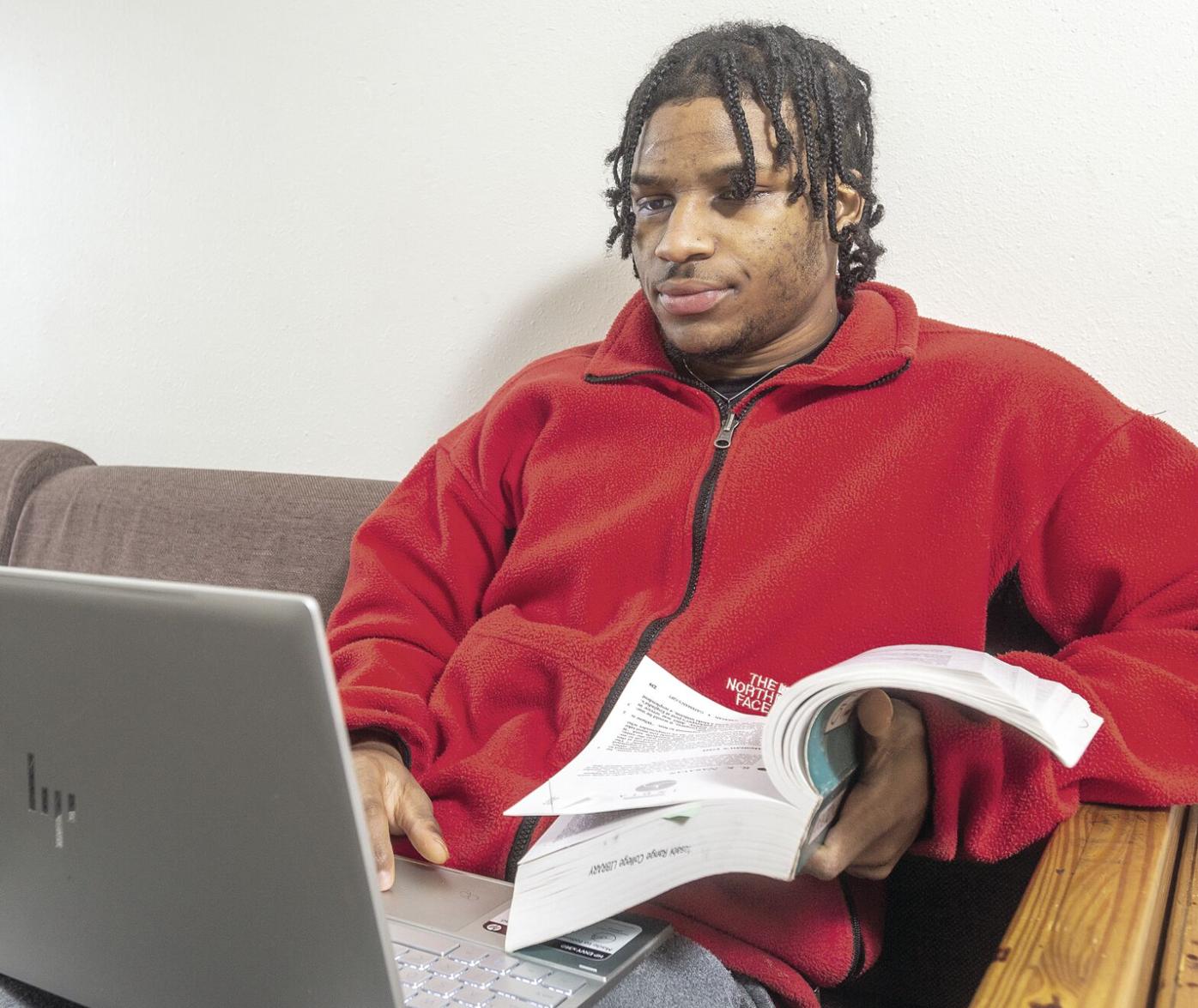 Mesabi Range College sophmore DeJsani Beamon keeps up with his online classes from his dorm on campus Friday morning. With sports shut down and classes switched to distance learning, on campus athletes and their coaches are working to find ways to stay engaged. 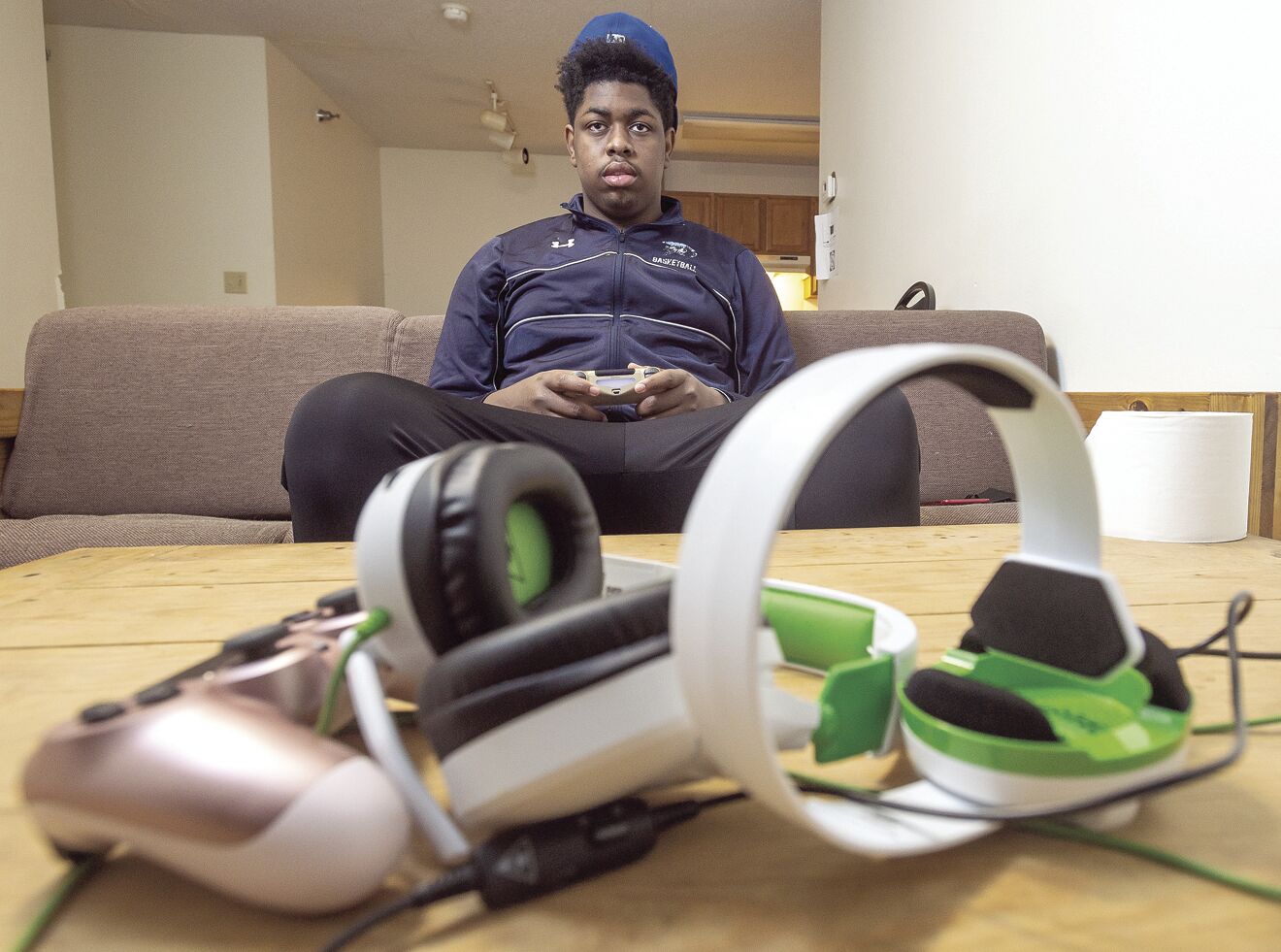 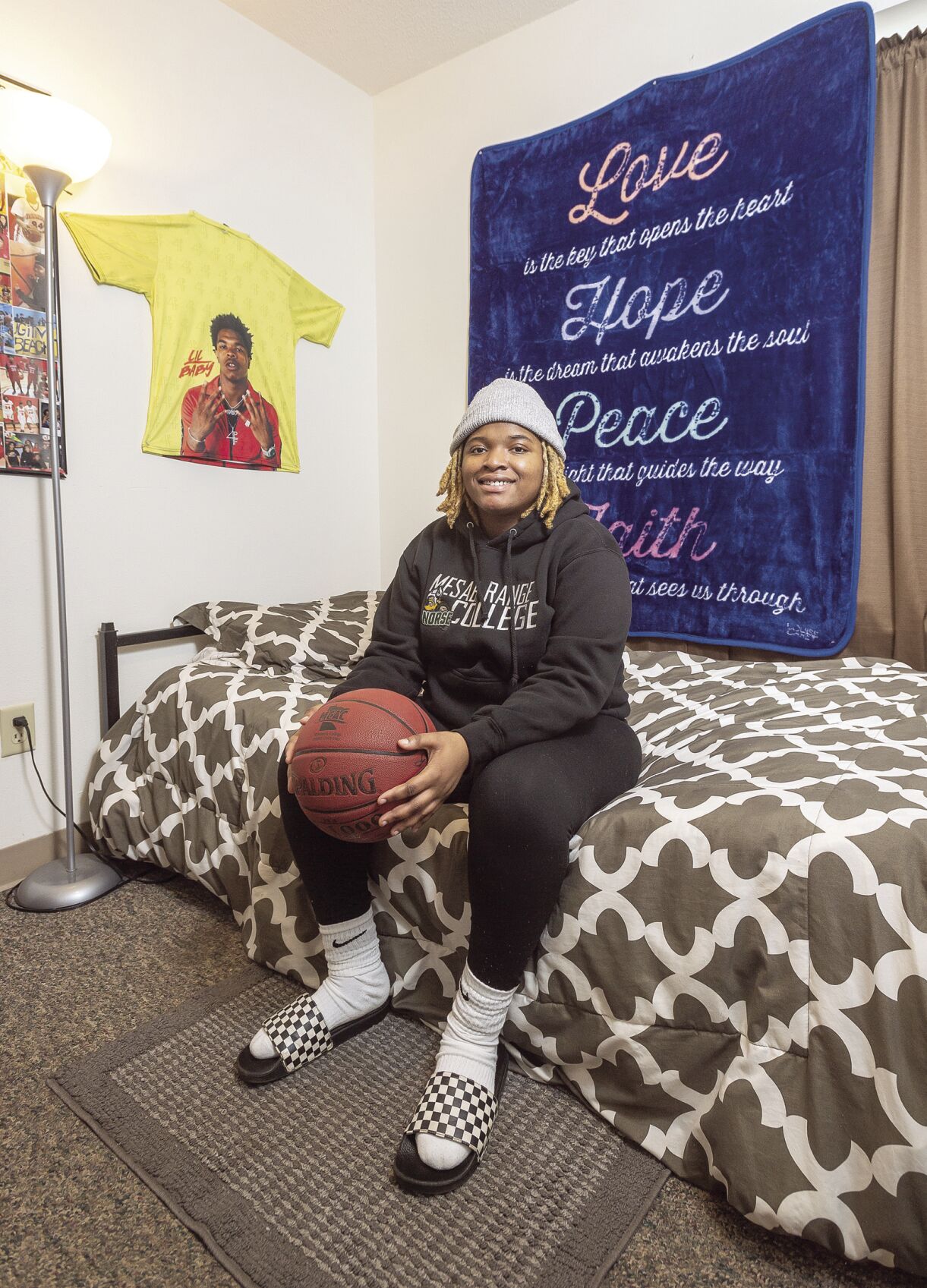 Mesabi Range College basketball player Christianna Monger poses in her on campus dorm room Friday morning. Monger, like the rest of her fellow students is making the best of COVID-19 related changes and shutdowns.

Mesabi Range College sophmore DeJsani Beamon keeps up with his online classes from his dorm on campus Friday morning. With sports shut down and classes switched to distance learning, on campus athletes and their coaches are working to find ways to stay engaged.

Mesabi Range College basketball player Christianna Monger poses in her on campus dorm room Friday morning. Monger, like the rest of her fellow students is making the best of COVID-19 related changes and shutdowns.

VIRGINIA — The men’s and women’s basketball players living on campus would do just about anything to be in the Mesabi Range College “bubble’’ playing ball with their teammates.

But after Gov. Tim Walz’s four-week pause was implemented and their seasons were canceled (both due to the coronavirus), they spend the majority of time in their dorms.

There is no doubt where they’d rather be, though.

“We like to call the gym the “bubble’’ because it’s an escape. It’s a getaway. It’s just us playing basketball,’’ said Dejsani Beamon, who is originally from Chicago but came to Virginia from Dallas.

“For the most part, before the four-week shutdown, we were in the gym pretty much every day.’’

Being limited by the pandemic, leaves the players fairly bored.

“Not bored to death, but pretty close,’’ Beamon added.

“I do feel stuck in the dorms. It’s kind of isolated,’’ the sophomore added.

“I spend most of my time in the dorm. The only time I’m not in the dorm right now is if I’m with the tutors’’ in the library.

Women’s basketball player Christianna Monger came to campus from St. Louis, Mo., thinking her team was going to play. However, the decision was made last month to cancel women’s and men’s basketball all together for the 2020-21 season.

“It was messed up. Everybody was hurt’’ when the season was canceled. “We just came up her for no reason.’’

Monger, 19, remembers the day she heard the bad news.

“I was just shocked. I knew it was going to end up happening again. It happened too fast. We didn’t even get to practice.’’

What makes it harder for the sophomore shooting guard is that other schools are able to have their seasons.

That’s not fair, she said, but she understands why that’s happening. “It’s different situations for different schools.’’

Once the seasons were canceled, the focus for the student athletes was put solely on studying online.

“The sophomores kind of jumped right into it,’’ said head men’s basketball coach Tamara Moore. It was more of a challenge for the freshmen early on, but “once they got the jist of it, it was easier. She added those “on campus could come and meet with advisors and things like that.’’

Freshman Ziare Davis of Philadelphia said he was one of the newcomers that had some difficulty adjusting to online learning.

“It was a little struggle at first. In-person classes are a lot easier,’’ according to the 19-year-old, who said it has been harder getting help from his teachers online.

“It’s not hard, but it’s kind of confusing,’’ Monger told the Mesabi Tribune. That comes from each class being different, with different spots to find things, she added.

While it might be harder, Monger said “the teachers make time for us.’’

“It really wasn’t that big of an adjustment just because I’m a sophomore,’’ Beamon said. In addition, “instructors are easy to get a hold of. Especially with this COVID going on, they make sure that they’re available to help students.’’

Has doing online learning affected his grades at all?

“Not necessarily for me. … for others that aren’t good at just looking at a computer and learning, I’m pretty sure it was difficult for them.’’

Besides homework, the players have a lot of time to bond with their teammates.

In addition to indoor games and activities, Moore had her players outside Thursday tossing around the football on a warmer than average day in Virginia.

The first-year men’s coach has also introduced UNO to the dorm’s residents.

Moore has amped up the classic card game with “savage’’ cards, which have drastic moves written on them and can’t crush a player’s chances of winning.

“We just kind of take it to another level,’’ she said.

“We get real with the UNO, like a championship. We treat it like we’re in the gym.’’

While off-campus trips to the bowling alley or Duluth have been limited due to the pandemic, the student athletes are still finding things to do.

“We try to find little things to do here and there just to keep us occupied,’’ Beamon said.

Now being primarily in the dorms, the time is about team bonding and becoming more familiar with their teammates.

“We just enjoy each other, laugh and joke,’’ Beamon added. “We just try to find anything we can with each other. We talk a lot too. That’s pretty much the biggest thing we do in the dorms.’’

White believes being in the dorm together will make the team better once they get a season. “The communication’s just going to be there when the season comes.’’

Davis is OK with spending a lot of time in his dorm room because “it’s very cold with nothing to do’’ in Virginia.

He feels stuck sometimes, but also knows “it’s for the safety of us … I’m alright with it.’’

Davis is looking forward to getting back to Philadelphia for Christmas break on Friday, though.

Coming to Virginia was his first time away from the East Coast and can’t wait to see his family again. “I have a nephew I haven’t met yet,’’ he added.

“I miss my family a lot’’ during this pandemic time, she said Friday, just a few hours before she was to return to St. Louis. “I’m really excited. I miss my dad.’’

All of the players are still wishing there can be some sort of a season.

“I’m from a basketball state, so it’s real different being away from a gym for a certain amount of time,’’ White said.

“I just wish they would have pushed a little harder to have a season,’’ he added.

Davis is keeping his fingers crossed about being able to play in 2021. “If they’re OK with it, have a season.’’

“If we do get a chance to play this season, I guarantee you we will be ready to play,’’ Beamon added.

Moore said she would be happy to get a 10-game season or some five-on-five or three-on-three practices in 2021.

“That’s something that they could get excited about. Hopefully we’re at the point where the governor does allow us to play. Next year, we’ll be ready to go.’’