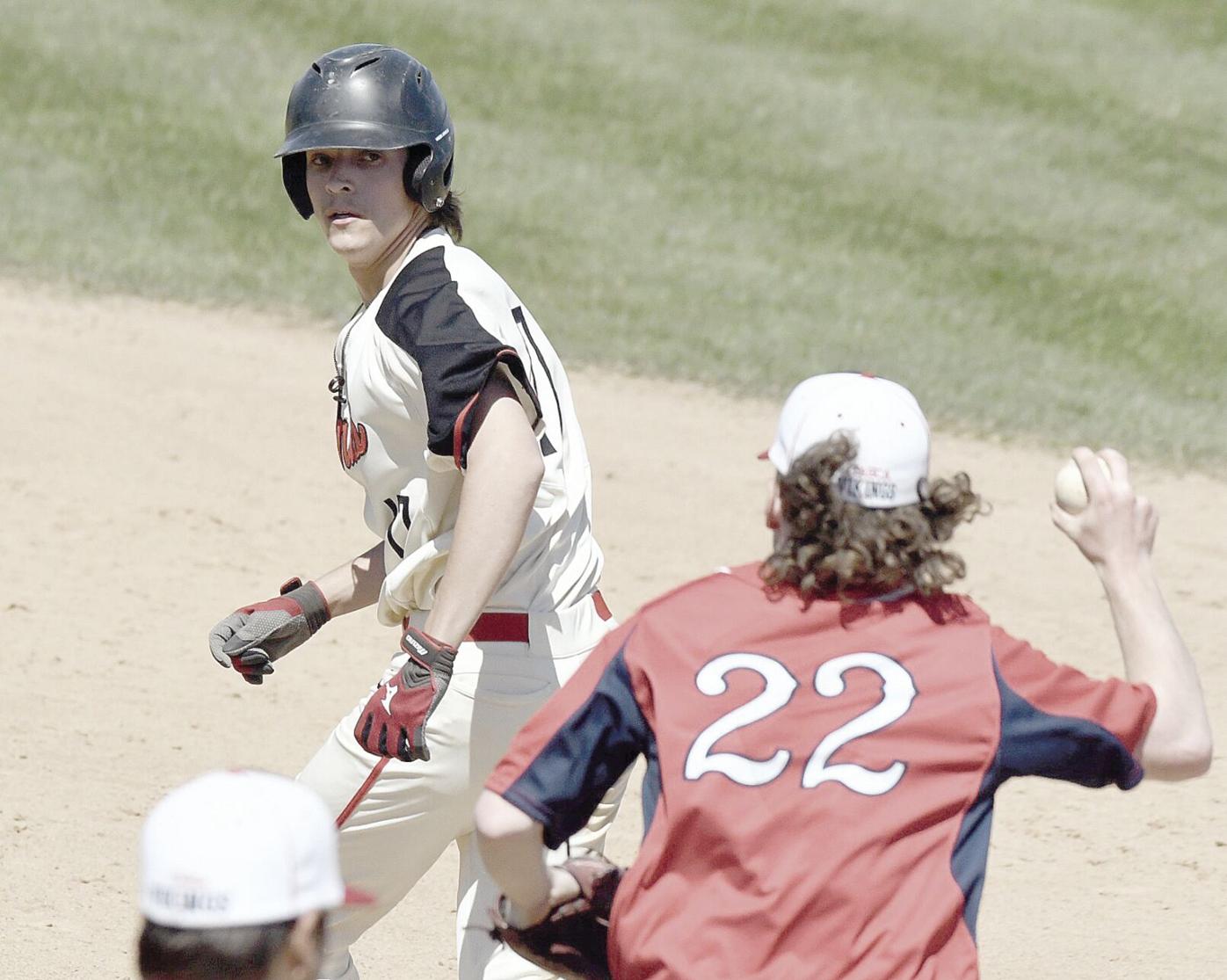 Hibbing's Noah Vinopal got caught in a rundown during the fifth inning of the Cardinals' first game of a doubleheader against Itasca Saturday at Al Nyberg Field. The Vikings' Sam MacLeod runs Vinopal back to second base. Vinopal was safe on the play. 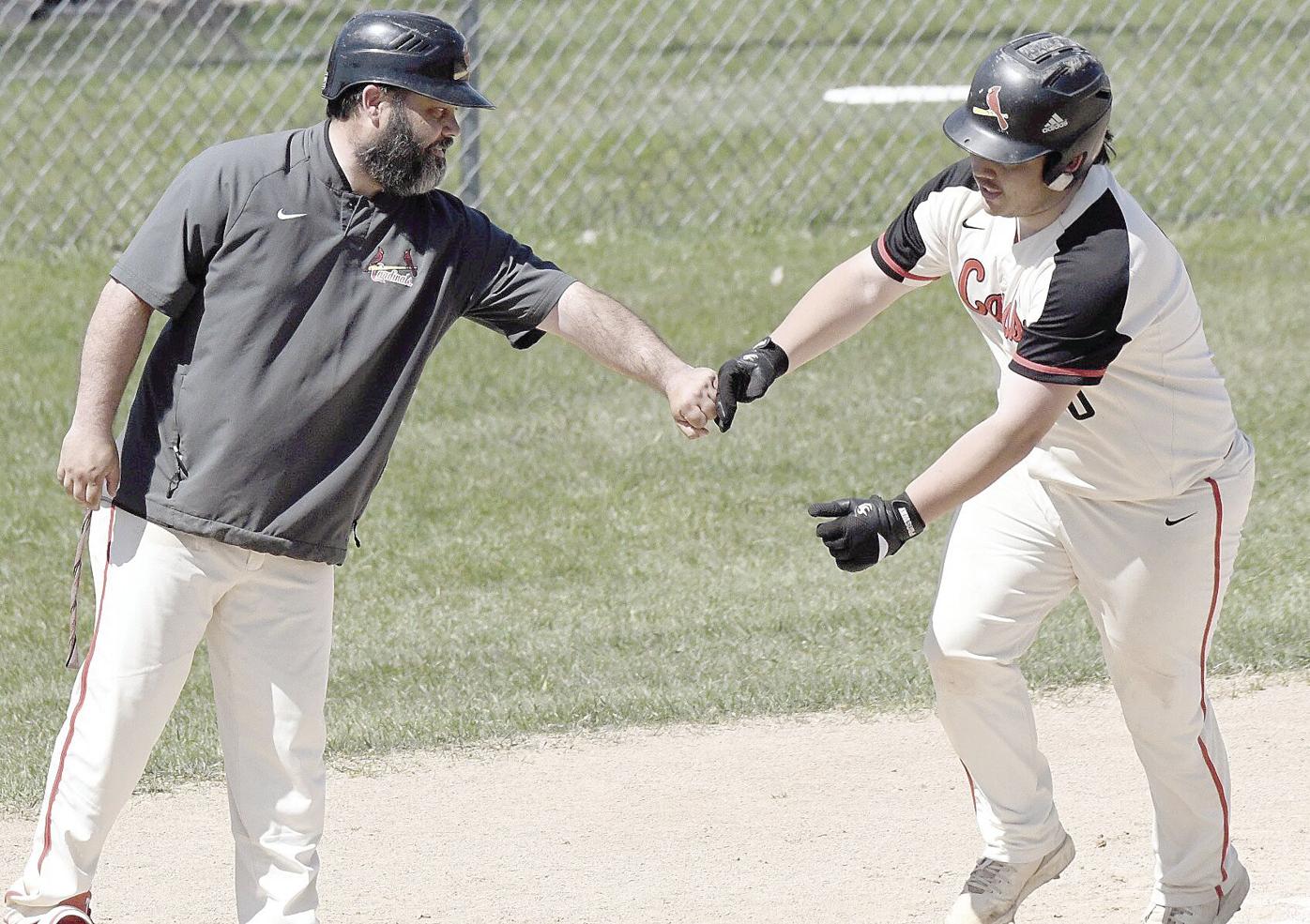 Hibbing's Robert Rodriguez gets a fist bump for Cardinal manager Bob DeNucci after he hit a three-run home run during the fifth inning of their game with Itasca Saturday in Hibbing.

Hibbing's Noah Vinopal got caught in a rundown during the fifth inning of the Cardinals' first game of a doubleheader against Itasca Saturday at Al Nyberg Field. The Vikings' Sam MacLeod runs Vinopal back to second base. Vinopal was safe on the play.

Hibbing's Robert Rodriguez gets a fist bump for Cardinal manager Bob DeNucci after he hit a three-run home run during the fifth inning of their game with Itasca Saturday in Hibbing.

HIBBING — The Itasca Community College baseball team used a six-run fourth inning en route to a 9-5 victory in game one of an MCAC doubleheader at Al Nyberg Field Saturday.

The Vikings opened the scoring in the first inning when Cade Marquardt doubled with two out, then he scored when Dawson Stevens reached on an error.

“It was nice to get that lead, especially for Mason,” Lamppa said. “He’s been our sophomore leader. When you get a lead for him, you feel comfortable because you know he’s going to keep you in the game and throw strikes.”

“We swung the bats well,” Lamppa said. “We got our leadoff guy on and that generates some confidence. All of a sudden, you get him out of the stretch and you have to take advantage of those situations.

“It was fun. We swung well

But Itasca coach Justin Lamppa knows no lead is safe, and the Cardinals proved him right by getting five runs in the fifth.

With one out, Jake Miller and Yadied Baez both singled. With two out, Hunter Herpel singled home a run, then Karson Cantrell hit what looked to be the third out of the inning only his pop up to first was dropped for an error, which allowed Baez to score.

Robert Rodrigues followed with a three-run home run, his sixth of the season, to make it 9-5.

“No lead is ever safe,” Lamppa said. “We’ve been know a couple of times this year of giving up double-digit inning runs. They had the makings of that again. If you were to say that I wasn’t nervous, I was nervous.”

“We made that big error in that inning, and Hibbing took advantage of it. It’s frustrating, but I’m glad it didn’t cost us the game.”

MacLeod settled in after that inning, facing just six more hitters over the next two innings to preserve the victory.

JD Cunningham started for the Cardinals. He tossed three innings, allowing seven hits. He struck out two and walked one. Kazdion Mount came in relief, pitching .1 inning, giving up one hit.

Brody Niskanen finished up for the Cardinals, tossing 3.2 innings. He didn’t give up a hit. He struck out two and walked three.

Miller had two hits for Hibbing.

BROOKLYN CENTER — Beau Barry and Nick Peterson combined for a no-hitter as the Tigers ran all over the Centaurs Saturday.

Barry and Peterson combined for 10 strikeouts and one walk.

Barry had four hits, including a triple, and five RBI. Sam Serna had three hits, with two doubles and four RBI. Koskela, Peterson and Perkovich all had three RBI