Hibbing’s Schuyler Pimentel goes up for a layup during the first half of the Cardinals MCAC contest against Fond du Lac Wednesday in Hibbing. 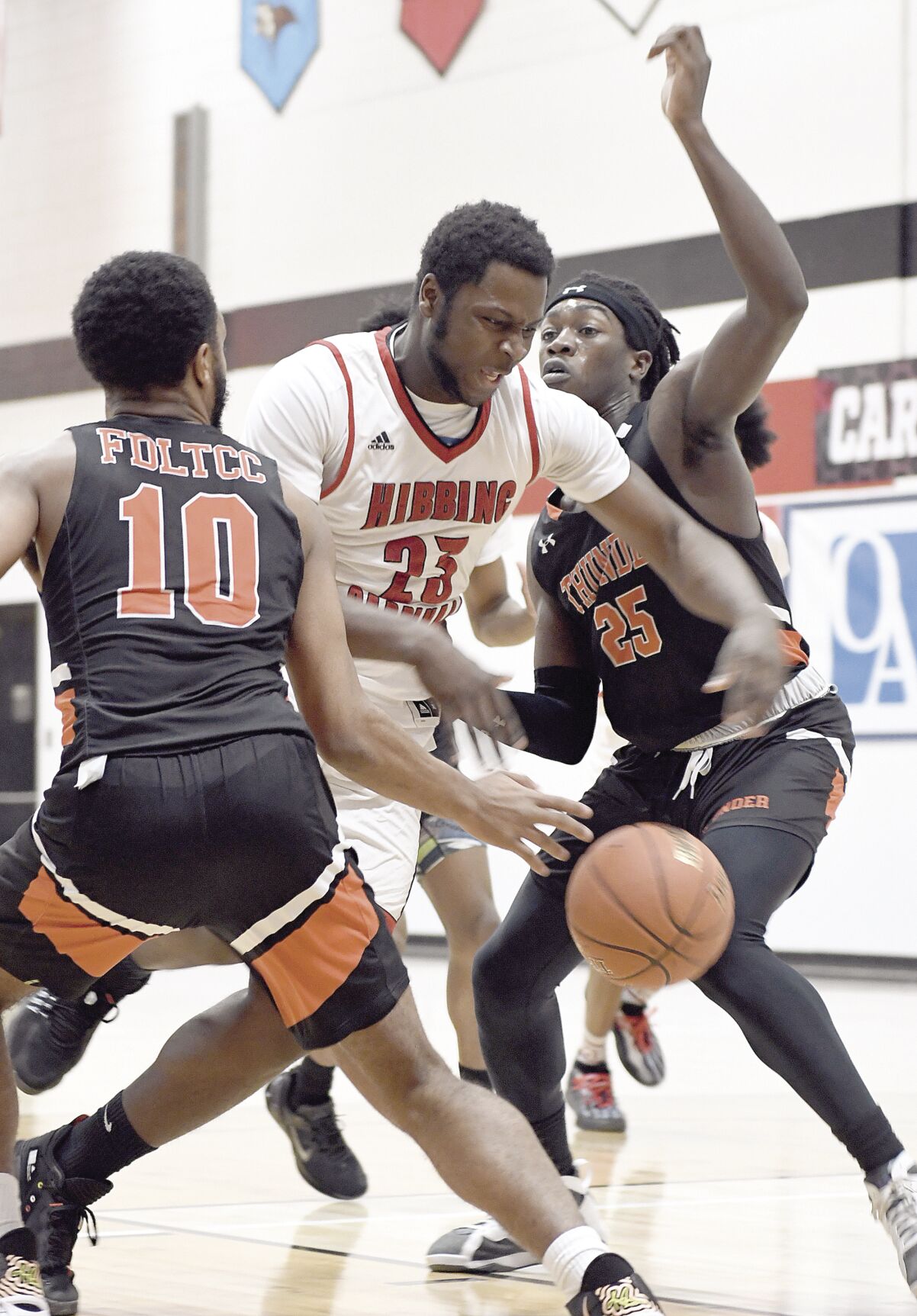 Hibbing’s Ray Washington-Battle (23) tries to squeeze between Fond du Lac’s Ian Green (10) and Tahj Jenkins during the first half of their game Wednesday in Hibbing.

Hibbing’s Schuyler Pimentel goes up for a layup during the first half of the Cardinals MCAC contest against Fond du Lac Wednesday in Hibbing.

Hibbing’s Ray Washington-Battle (23) tries to squeeze between Fond du Lac’s Ian Green (10) and Tahj Jenkins during the first half of their game Wednesday in Hibbing.

It took the Cardinals about 30 minutes, but they extended a two-point halftime lead into a 10-point lead in a 2:30 span en route to a 114-98 victory over Fond du Lac Wednesday at Dick Varichak Gymnasium.

Hibbing coach Dave Wilson said the team met his expectations for the first game of the season.

“There’s a few things we have to work on, but we have to get back on defense,” Wilson said. “We gave up 98 points. Other than that, they far exceeded what I thought. We’re a little bit ahead of where I thought we would be.

“That’s a good thing. Not only that, it’s always fun to get a win.”

Neither team gained an advantage in the first half, but it was an up-and-down game for most of the 20 minutes.

The only problem the Cardinals had was foul trouble.

Hibbing put the Thunder in the bonus with about 11 minutes remaining in the half.

“That was getting to me,” Wilson said. “That was a situation where a lot of them haven’t played together a lot with each other. The communication was horrible. Hopefully, we get that rectified, so we’re not in such a tough situation our next game out.”

Fortunately for the Cardinals, Fond du Lac missed 11 of those charity tosses, which kept Hibbing in the game.

The Cardinals did just enough to take a 51-49 lead at the half, only nobody really knew it because the clock went out about halfway through, which made for an interesting first half.

“I didn’t know what it was,” Wilson said. “When that scoreboard went out, I was shocked that we were up by two. When I went into the locker room, I told them that no matter what the score was, it didn’t matter.

“We had to come out and play defense. For the most part, they answered the bell in the second half. We still gave up 98 points, but hopefully, these fellas will get all of that stuff cleaned up as well.”

Moe Washington led the way by hitting two 3-pointers. Schuyler Pimentel followed with a bucket, then Stephon Smith scored to make it 85-75.

After a Fond du Lac timeout, Ray Washington-Battle Jr. and Pimentel scored to give the Cardinals their biggest lead of the game with under eight minutes to play.

“The boys started going to the basket, then Moe hit a couple threes there,” Wilson said. “They started feeding off of that. We started limiting them to one shot on their offensive side of the ball.

The Thunder didn’t go away, however, as they made it 93-89 with just under four minutes to play.

“My heart started to sink when they started coming back, but the boys held them off,” Wilson said. “I told them that the strategy when you’re winning is there’s no need to rush. It’s on the other team to try and figure it out.

“They’re young. We have to get that part of it figured. They have to understand the game and how it works, but we got the job done.”

Hibbing was able to hold its composure and close it out.

“Moe took over there and told the guys, ‘Listen, this is what we have to do,’” Wilson said. “They responded.”

Washington led the way with 33 points. Smith had 21, Pimentel 14 and Kianté Cole and Washington-Battle 10 each.

Kyra Williams chipped in with eight kills and Ava Johnson had five.

Lexie Hammer had 38 assists and 17 digs. Markovich pitched in with 22 digs and three blocks, and Miller had 18 digs.

Emma Kittelson and Victoria Jennissen had 13 and 12 kills, respectively, for Sauk Center. Ella Froseth had 22 assists and Abbie Meyer 15. Madeline Nelson had 21 digs, and Cierra Kortan finished with 11.

Jennissen had four blocks, and Kittelson and Jenna Gapinski-Voight had three blocks each.