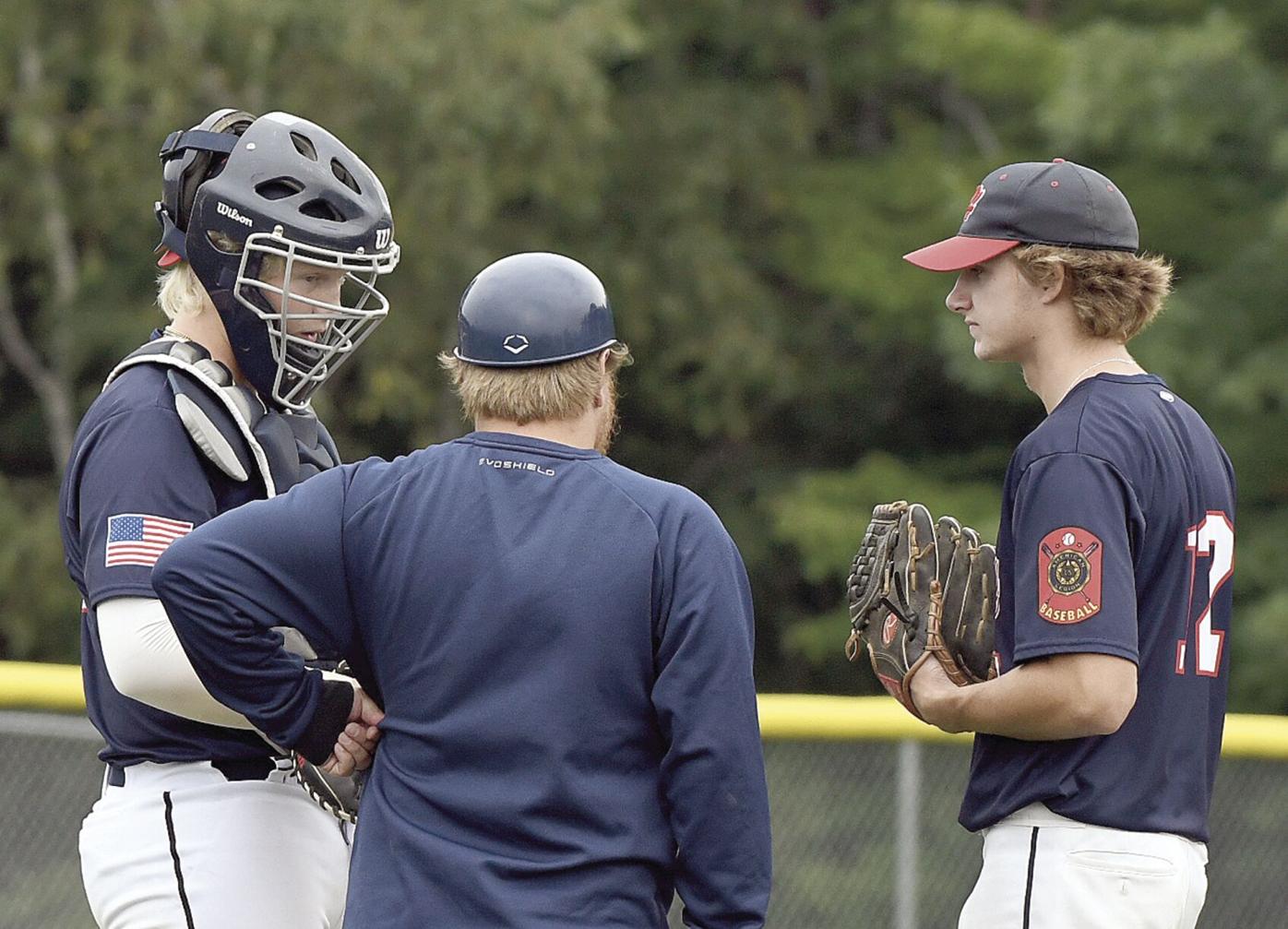 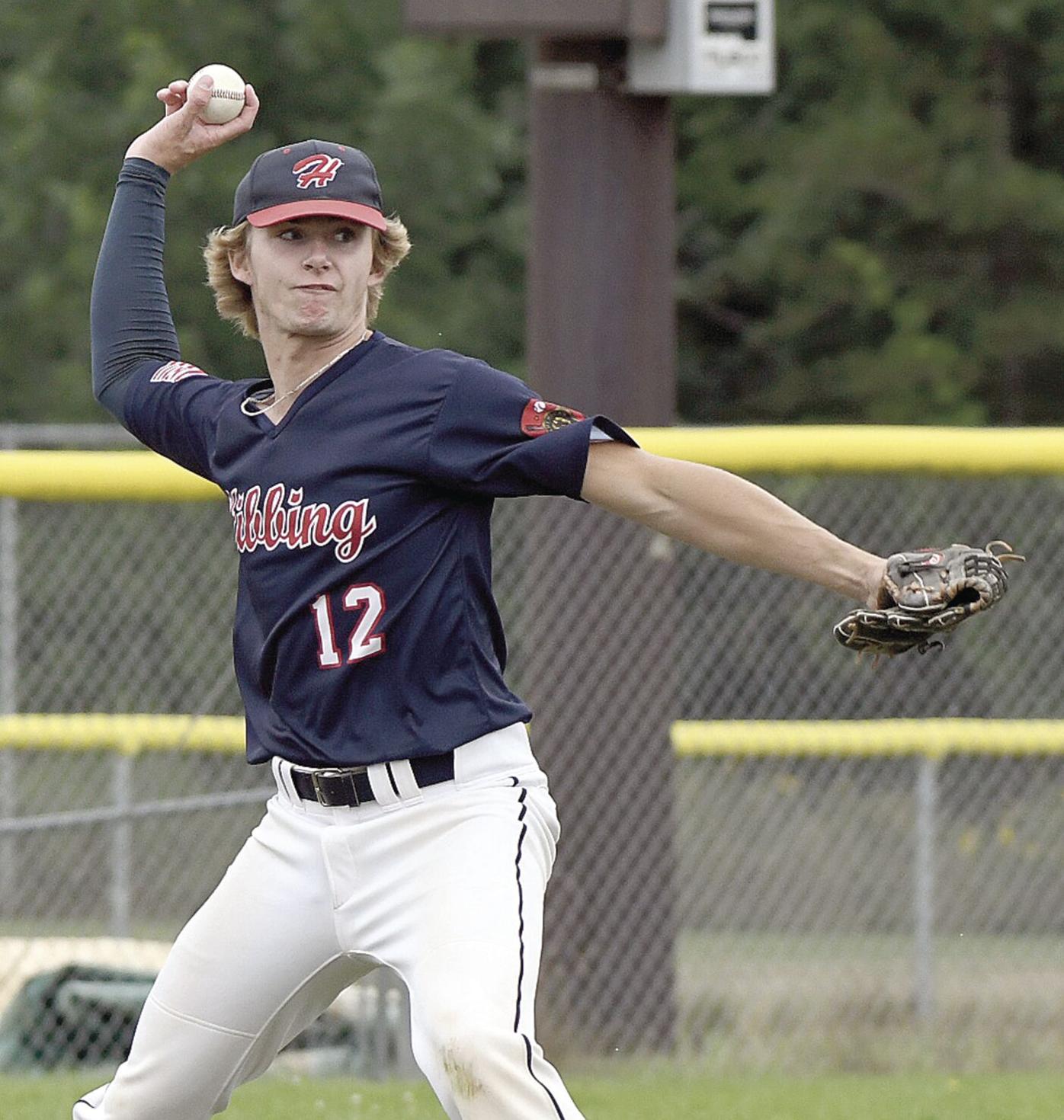 Hibbing pitcher Bryce Warner is about to throw a West Duluth baserunner out at first base following a bunt in the first inning of Post 222’s Substate 10 playoff game Wednesday at Portage Park in Cohasset.

Hibbing pitcher Bryce Warner is about to throw a West Duluth baserunner out at first base following a bunt in the first inning of Post 222’s Substate 10 playoff game Wednesday at Portage Park in Cohasset.

COHASSET — It was game one of the Substate Tournament, and nothing went right for the Hibbing American Legion baseball team.

Post 222 committed six errors and only had three hits as West Duluth advanced in the winner’s bracket with a 10-0, five-inning, 10-run rule victory over Hibbing in Substate 10 play Wednesday at Portage Park.

Post 222 manager Adam Schafer knew his team had to tighten up his defense, but three errors in the first inning allowed the Post 71 Cubs to score four runs and take the early lead.

“You can’t play playoff baseball and expect to make six errors and expect to win the game,” Schafer said. “That’s the bottom line. Bryce (Warner) threw strikes. Defensively, we had to pick up the ball behind him because he’s a pitch-to-contact guy.

“We had at-them balls, and we didn’t pick them up.”

Hibbing got a two-out double by Joe Allison, but they left him stranded at second base.

West Duluth came up and got a lead-off single by Andy Larson. He took second on a passed ball, and was sacrificed to third.

Caden Christensen walked. Warner got the next hitter to ground to second for a possible double play, but the ball was misplayed for the first error of the game, allowing Larson to score.

With runners on first and second, Warner got Dane Dzuck to hit into a possible double play, but the ball was thrown up the line, allowing Christensen to score.

After a hit-by-pitch, Logan Nylund reached on that third error, allowing Dzuck to score. The only legitimate run that Post 71 got was an RBI base hit by Nate Larson.

West Duluth sent nine hitters to the plate in the first, then the Cubs replicated that feat in the second with the help of two more Hibbing errors.

Andy Larson started the inning with a single and was sacrificed to second. Christensen reached on an error to score Larson. After a base-on-balls, Dzuck singled home a run, and Christensen would score on a wild pitch.

Dzuck scored when Nate Larson reached on an error.

“It’s one of those things where they take away your will to compete when it’s 8-0 after two innings,” Schafer said. “It’s a tough hill to climb to get back into it. We didn’t threaten that much offensively until the last inning.”

Post 71 scored once in the third on as Any Larson singled, stole second and took third on a throwing error. Gavin Bulthius hit a sacrifice fly to make it 9-0.

Hibbing still had plenty of time to make up that deficit, but Post 222 couldn’t get anything going.

“You try to focus on putting up a few zeros defensively, then maybe you can scratch a couple across, two here, three there,” Schafer said. “We had a lot of outs to work with, then you run into the 10-run rule.

“Offensively, we didn’t threaten that much either.”

Wet Duluth scored in the fourth as Carter Kilroy singled, and Ethan Carlson walked. Kilroy took third on a wild pitch and scored on a passed ball.

Josh Kivela had a bunt single for Post 222 in the third inning, then in the fifth, Liam Bussey walked, took second on a groundout, then Kivela doubled, putting runners on second and third with two out.

West Duluth relief pitcher, Carlson, got the next hitter to ground out to end the game.

Carlson worked two innings, allowing one hit, striking out one and walking one. Nylund started, tossing six innings of two-hit ball. He fanned three and walked one.

“Their kid threw strikes, but we hit a few at-them balls,” Schafer said. “They made plays, but we had too many strikeouts. They picked up the ball, we didn’t.”