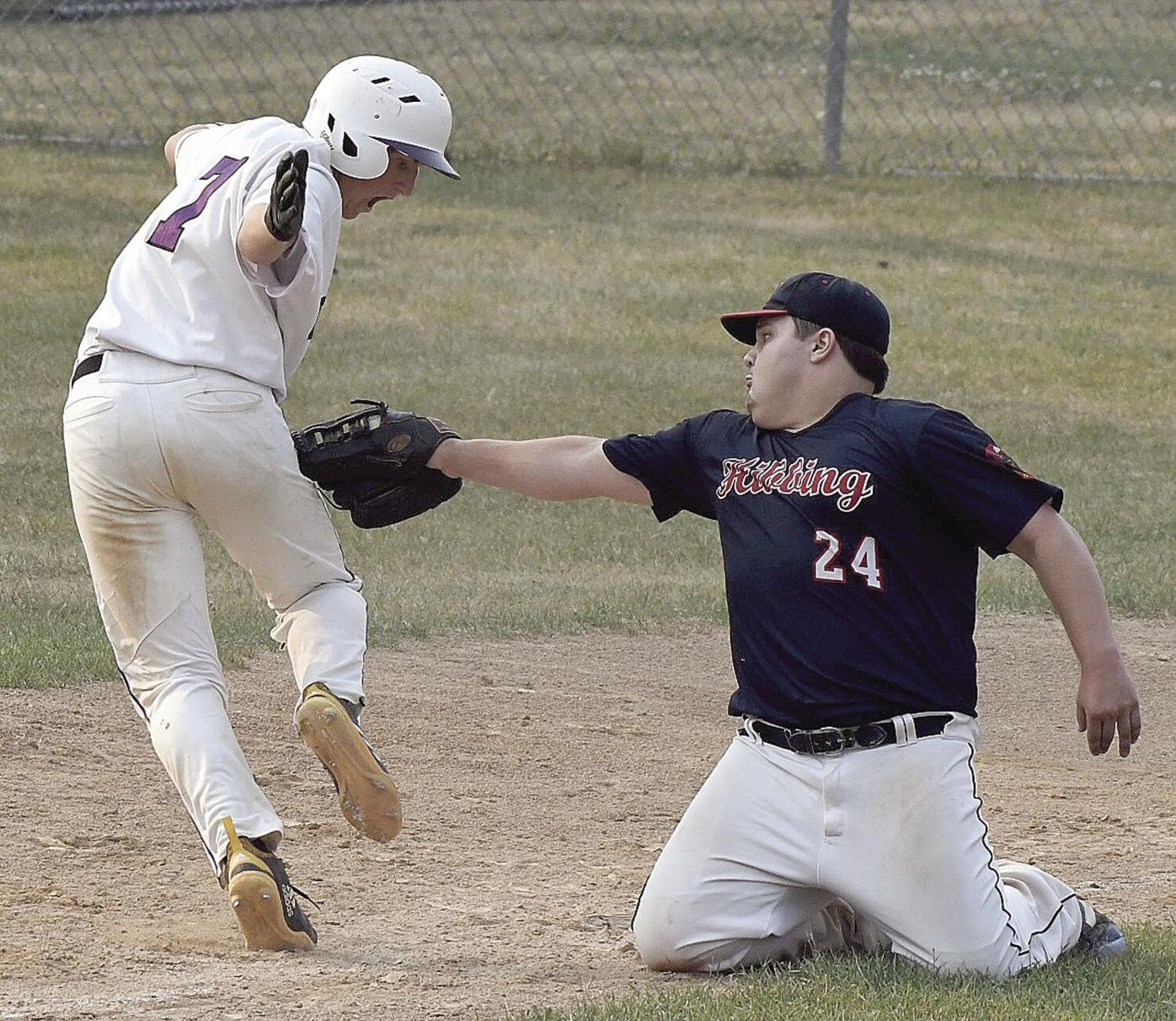 Hibbing’s Brody Niskanen (right) tags out Cloquet’s Joe Baker after he was caught in rundown between third and home during their American Legion baseball game Thursday in Hibbing. 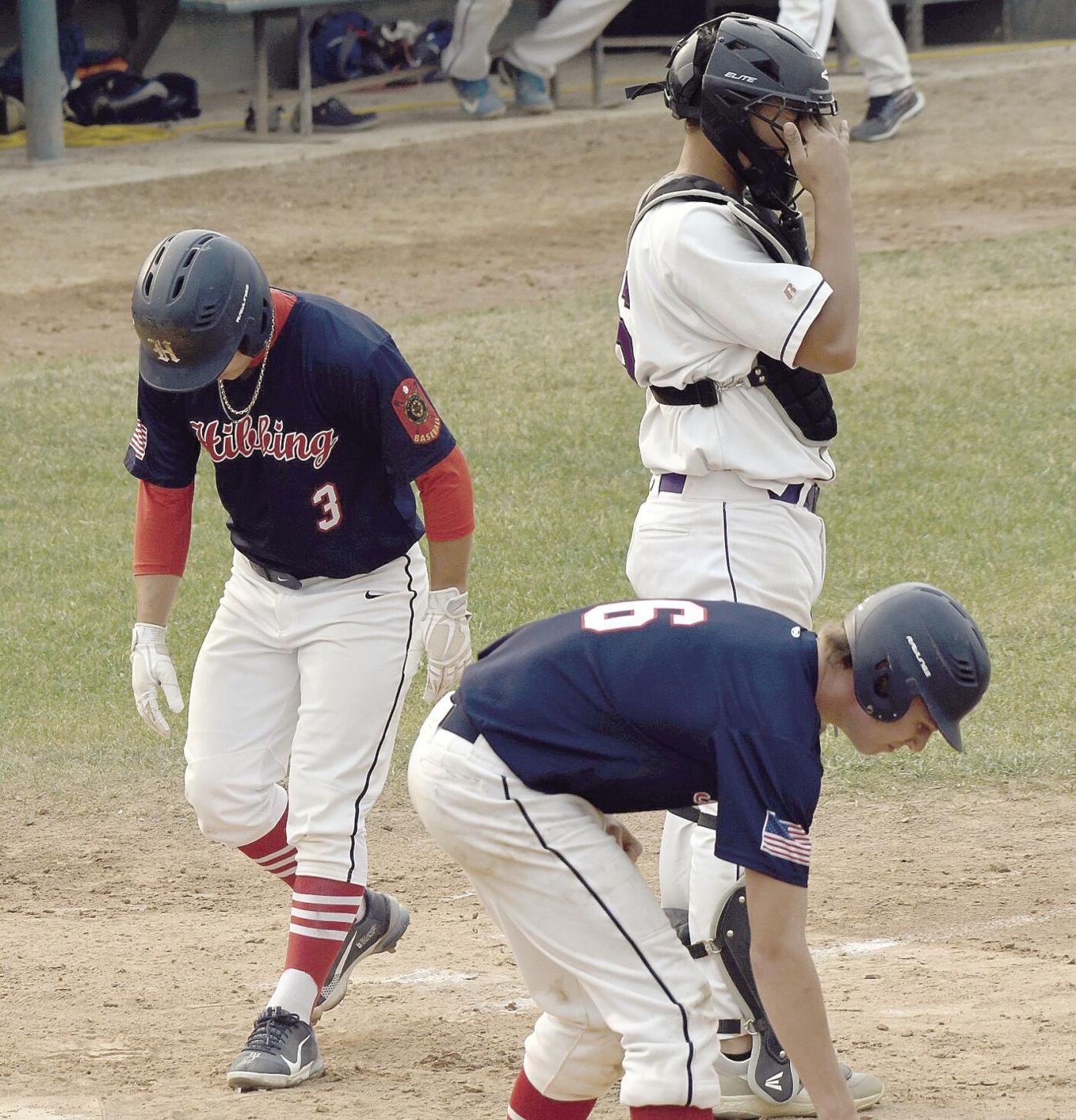 Hibbing's Joe Allison is about to touch the plate with a Post 222 run during third inning of Hibbing's American Legion baseball contest against Cloquet. Cloquet catcher Luke Sievert awaits the throw, and Hibbing's Isaac Colbaugh picks up the bat.

Hibbing’s Brody Niskanen (right) tags out Cloquet’s Joe Baker after he was caught in rundown between third and home during their American Legion baseball game Thursday in Hibbing.

Hibbing's Joe Allison is about to touch the plate with a Post 222 run during third inning of Hibbing's American Legion baseball contest against Cloquet. Cloquet catcher Luke Sievert awaits the throw, and Hibbing's Isaac Colbaugh picks up the bat.

HIBBING — The Hibbing American Legion baseball team needed a pick-me-up following an 0-5 weekend at the Gopher Classic, and Post 222 found what it needed.

Hibbing banged out 10 hits, started the scoring early and came away with a 10-3 victory over Cloquet Thursday at Al Nyberg Field.

Post 222 had a four-run first that got Hibbing off and running.

“Offensively, we jumped on their starter, and we were efficient with our at bats,” Hibbing manager Adam Schafer said. “In terms of our clutchness, we had runners in scoring position, and we were able to move them over and move them in.

“That’s something we didn’t see over the weekend. That efficiency in our at bats was good to see.”

After a one, two, three first inning, Hibbing came to the plate with an aggressive attitude.

After a wild pitch, Bryce Warner followed with a two-run single and it was 4-0.

Cloquet came back with one run in the second as Luke Sievert led off with a double. He would eventually score on a wild pitch.

Post 222 would respond to that run with three of their own in the second.

Kivela led off with a walk and stole second. Colbaugh doubled him home. Allison was hit-by-a-pitch, then after an infield fly, Brody Niskanen walked to fill the bases.

With two out and a 2-2 count, Drew Anderson grounded a single up the middle, scoring two runs and making it 7-1.

“You give yourself a little breathing room early on in the game, and it allowed Nisky to settle in,” Schafer said. “He threw a good game for us, too. You can set the tone early. We kind of put it in cruise-control mode for three innings.

“They were getting some out. We didn’t have great swings, but we set the tone early that we were going to be in control the whole game.”

Hibbing added one run in the third as Colbaugh walked with two and stole second. Allison singled him to third. Warner reached on an error, scoring Colbaugh, to make it 8-1.

Cloquet had a chance to score in the fourth, but left the bases loaded, but Hibbing wasn’t so fortunate in the fifth.

Post 222 did throw a runner out between home and third, but with a runner on second, Mason Anderson hit a two-run home run to make it 8-3.

Hibbing couldn’t respond in the fifth inning with those two runs, but Post 222 did get them back in the sixth.

Warner led off with a single and Robbie Carlson walked with one out. Anderson reached on a fielder’s choice, putting runners on first and third.

Anderson advanced to second on a wild pitch, then Liam Bussey blooped a single to right, scoring two runs and making it 10-3.

“It’s breathing room. It’s insurance,” Schafer said. “Either we were going in the field or coming off the field saying we can’t let them back in the game. Whether that’s our defensive play or our offensive play, that had to be the mentality for the remainder of the game.”