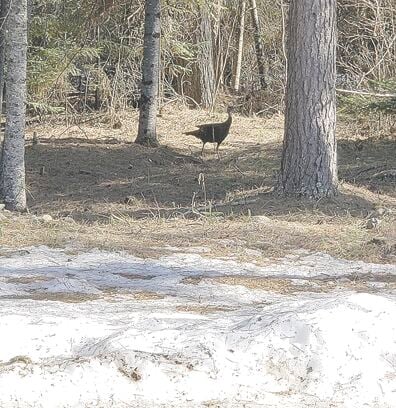 A wild turkey taking a stroll through the woods in April. 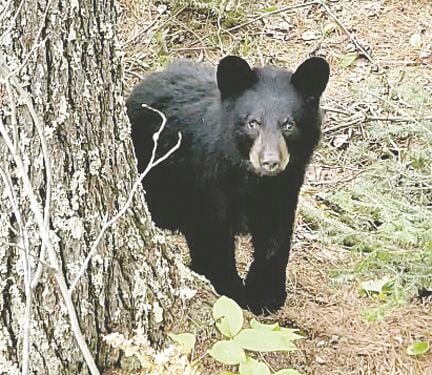 A bear cub visits me while working on a deer stand.

A wild turkey taking a stroll through the woods in April.

A bear cub visits me while working on a deer stand.

It’s been an interesting year for wildlife viewing in the Northwoods that I frequent.

I’ve seen a wild turkey, multiple bears, deer, a bunch of grouse in two weeks (over two dozen flushes already), signs of a bobcat and most recently a ground scrape left by a moose.

A couple of those sightings are firsts for me – the turkey and the moose sign for sure. I’ve only seen one moose in the wild, in a swamp near a highway south of Gilbert many years ago.

Spotting one or both of these critters in the wild up north is a pretty special experience, especially since one – the turkey – has traditionally been a game bird found in warmer parts of the state and the other, the moose, looked like it was on its way out of Minnesota not that long ago.

Turkeys have been naturally expanding their territory north since about 2009 after bird’s native to southeastern Minnesota were trapped and transplanted around the state.

They were moved to Aitkin and Crow Wing Counties and have since made their way into St. Louis County and can now be seen on a regular basis as far north as Tower. There have also been plenty of sightings in areas around Hibbing, Toivola, Cherry, Zim, Cotton, Palo, Makinen and Markham.

At the same time the moose population has been holding pretty steady in the state despite a rapid drop in the population between 2005 and a low point in 2013, when the Minnesota Department of Natural Resources estimated there were between 2,160 and 3,650 moose.

Each year DNR officials, including Tom Rusch, DNR Wildlife Manager for the Tower area, conduct an aerial survey in northeastern Minnesota to estimate the moose population and to monitor and assess changes in the overall status of the state’s largest deer species.

This year the survey was conducted from Jan. 6 through Jan. 17 and consisted of nine actual survey days, and a sample of 52 survey plots.

Rusch has been the aerial moose survey coordinator for about 20 years. He said that this year about 308 moose were observed on 39 of the 52 plots. That’s an average of 7.9 moose per occupied plot.

While it is true past aerial survey and research results have indicated that the long-term trend of the population in northeastern Minnesota has been declining since 2006 (the current population estimate is 64% less than the estimate in 2006), this is the ninth year in a row that the population has remained stable.

“The stability itself is good news but it does not serve as evidence for either a turnaround or a continued decline in the population of Minnesota’s most iconic Northwoods animal,” he said, adding that this is typically the best time of year to see the animal in the wild.

“The last week of September and the first two weeks of October are prime time as moose engage in their annual breeding period and this rutting activity makes them more visible and vocal than any other time of the year,” Rusch said.

Hopefully that bodes well for my chances at seeing one up close and person this year as the scrape I came across is not far from where I plan on having a deer stand this November.

In other moose related news, the U.S. Fish and Wildlife Service announced recently that after a thorough review of the best available scientific and commercial information, the U.S. the agency has determined that the U.S. population of the northwestern subspecies of moose is not a distinct population segment (DPS) and does not warrant listing under the Endangered Species Act (ESA).

The subspecies is currently found in Minnesota, North Dakota and Isle Royale National Park in Michigan.

According to a news release, the agency received a petition from Honor the Earth and the Center for Biological Diversity to list the subspecies as a DPS and protect it under the ESA in 2015.

In 2016, the Service published a finding indicating that the petition warranted further review.

The Service considered many factors in this listing determination including reproductive behavior, moose harvest regulations, habitat management and the moose’s conservation status in the U.S. and Canada.

In the news release, officials said that after a comprehensive analysis, the Service determined that the northwestern subspecies of moose is stable and there is no information indicating a physical, physiological, ecological or behavioral difference between the U.S. and Canadian populations. Therefore, the agency determined that the subspecies is not a DPS and does not warrant ESA protection.

“Moose are the largest members of the deer family and play an integral role in human and environmental health,” said Lori Nordstrom, assistant regional director for ecological services in the Service’s Great Lakes Region. “The Service remains committed to conserving moose, and other native species, for generations to come.”