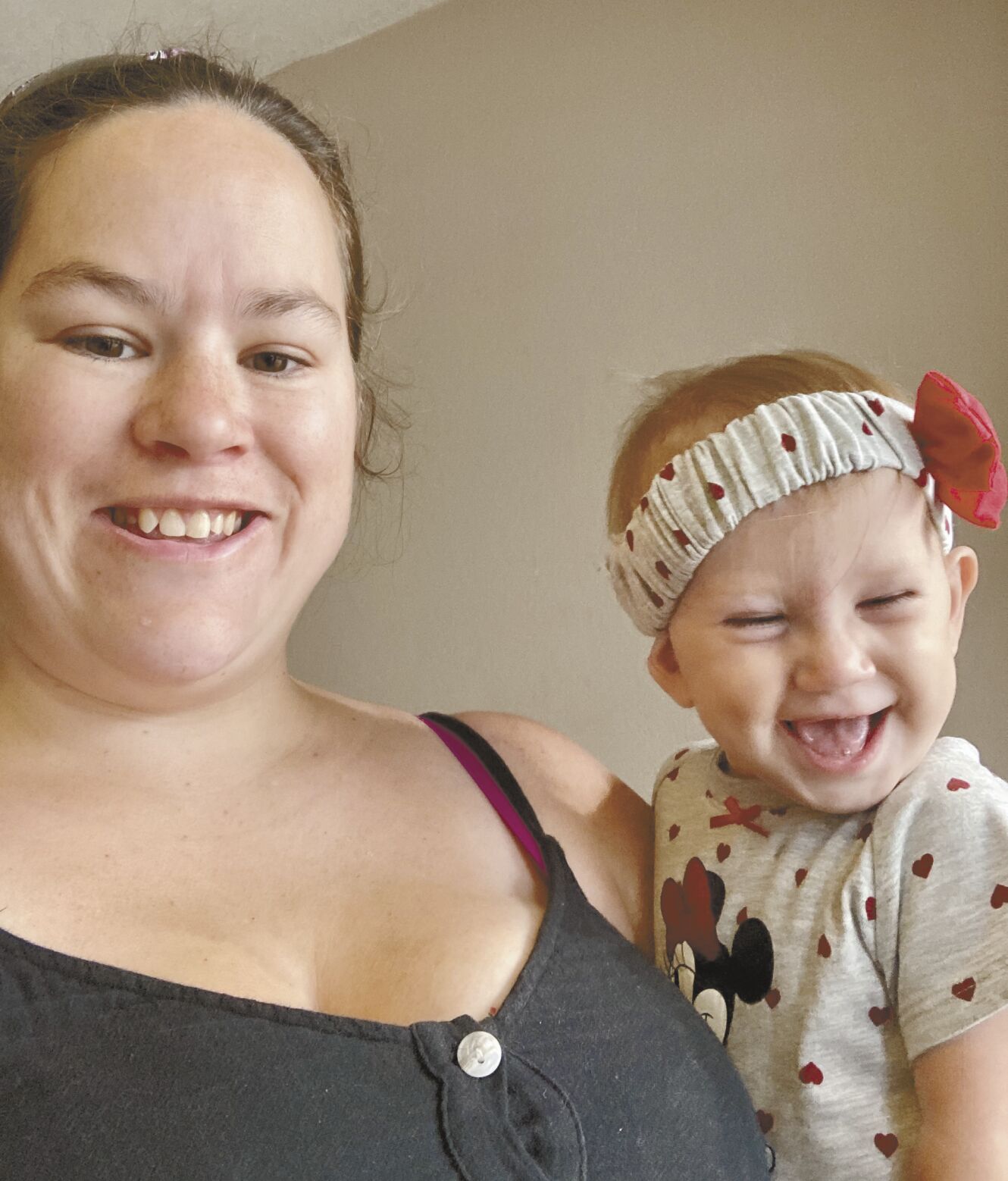 Shannon Bert, of Eveleth, is pictured with her youngest child, Willow. The 11-month-old's life was recently saved from a choking incident when Eveleth resident Megan Beard-Groom applied infant choking rescue measures on the baby after seeing the mother running across the street with Willow in distress. 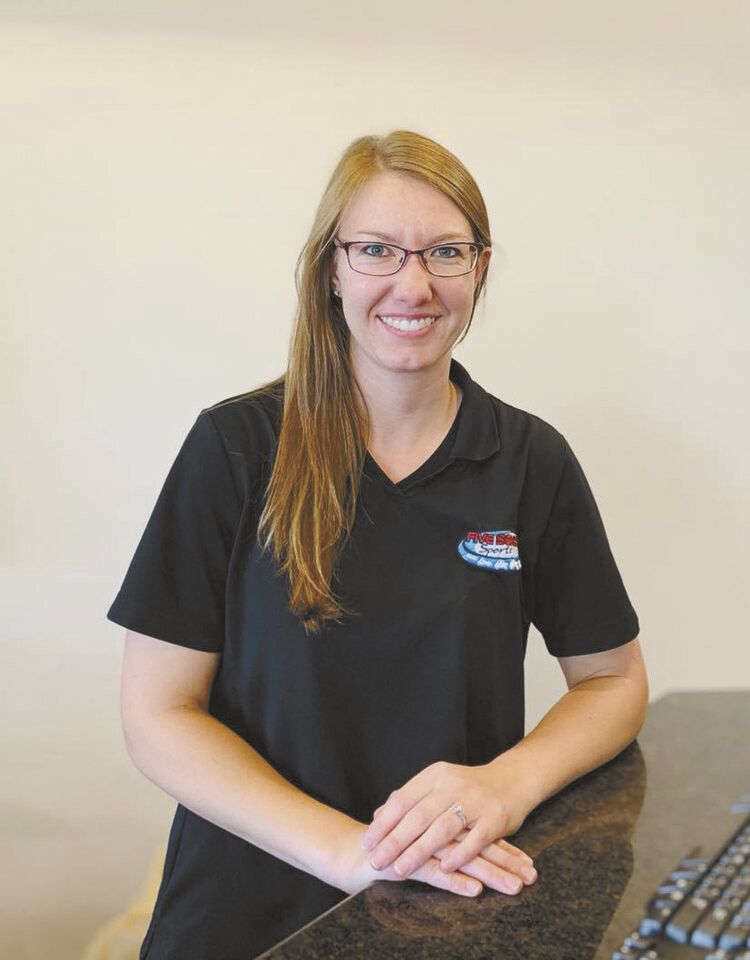 Megan Beard-Groom, of Eveleth, will receive a lifesaving award tonight from the City of Eveleth for her heroic act of saving the life a choking baby two weeks ago.

Shannon Bert, of Eveleth, is pictured with her youngest child, Willow. The 11-month-old's life was recently saved from a choking incident when Eveleth resident Megan Beard-Groom applied infant choking rescue measures on the baby after seeing the mother running across the street with Willow in distress.

Megan Beard-Groom, of Eveleth, will receive a lifesaving award tonight from the City of Eveleth for her heroic act of saving the life a choking baby two weeks ago.

EVELETH — Eleven-month-old Willow was already a “miracle baby.” But the complications with mom and child during pregnancy and around birth paled in comparison to the dire situation that happened two weeks ago on Sept. 16.

Bert, a mom of five children, originally from Duluth, had just relocated to a main street Eveleth apartment three days earlier — following 13 months of homelessness spent moving from shelter to shelter with her kids in Minnesota and Wisconsin.

She and Willow were at home with two of her other children, ages 2 and 4, when “a mother’s worst nightmare” took place.

“I picked her up. She was turning blue and was floppy,” Bert recalled. “I started patting her on her back.”

It didn’t help. Bert ran out into the hallway, screaming, and proceeded to sprint across the street to Jon’s Drug.

Seeking help, she handed Willow to the pharmacist. Just then, “a lady came out of nowhere.” The woman took the child and began applying back thrusts to the baby, whose airway was occluded, preventing any air exchange into her lungs.

The Eveleth Ambulance crew arrived within a minute of dispatch to find the baby crying, with a clear airway and good air exchange, said Therese Elverum, Eveleth EMS operations supervisor.

Mother and baby were taken into the ambulance. Willow didn’t have any complications from the ordeal, she noted.

But Bert never had a chance to talk with the woman who saved her baby’s life. “She is an angel, for sure,” Bert said.

Megan Beard-Groom, 31, a 2008 Eveleth-Gilbert High School graduate, was going about her usual day that Thursday, running errands in downtown Eveleth for work.

“I looked down the sidewalk and saw a girl running with a baby in her arms. The baby didn’t look right.”

Beard-Groom said she made a U-turn in her vehicle, parked her car hastily on the sidewalk, and ran into Jon’s Drug “to do something, if I could.”

There was a lot of chaos, she said. “I grabbed the baby and started giving her back thrusts, five or six times.” When the child began crying, “it was a relief. … She had been very purple and totally limp.”

Beard-Groom said her actions were an instinctual response. She and her husband have a 3-year-old daughter and she’d learned how to save a choking child in a birthing class. Beard-Groom also had certified nursing assistant training “from years ago.”

“It all happened so fast and my adrenaline kicked in and took over,” she noted. “I did not get to talk to the mom. She went into the ambulance to get the baby checked out. She was very flustered and worried about her baby, which is understandable. I’m just glad everything was OK.”

Beard-Groom added, “I’m glad I was able to help. I think it’s a good thing for everyone to know how to do (choking rescue procedures) because you never know when you might need to use that skill. The main thing is to not panic and focus, which is really hard to do. It has always been a fear of mine with my own child. But now I feel like I have conquered that somewhat. God is good and put me in the right place at the right time.”

Elverum contacted the City of Eveleth about presenting her with an award from the city. That will happen at 6 p.m. tonight at the Eveleth Fire Department hall. Beard-Groom will be honored “for her truly heroic act.”

Elverum added: “We couldn’t be more proud of Megan Beard-Groom. Her willingness to jump into action at the sight of someone in distress is commendable. It was told to me by her friend and coworker, Dave Mattson, that she took a CPR class a few years ago when her daughter was born, just so she would know what to do in case of an emergency. That foresight to be prepared certainly paid off.”

The EMS operations supervisor said she encourages others “to take the time to take this course, also. The end result, in this case, speaks for itself.”

“It’s nice to be recognized by the community,” said Beard-Groom, who grew up on Ely Lake in Fayal Township. “It makes me feel good about what I did. And maybe it will inspire more people to have the courage to become an aid to others during an emergency situation.”

There was also a second good samaritan who remained in the background during the incident.

Before running across the street, Bert had yelled to her other children to follow her out the door, but they did not. “After Megan had cleared the baby’s airway and our Eveleth Emergency Medical Technicians, Caitlin Korpi and Sarah Voss, had arrived on scene to evaluate her, Shannon said she needed to run back across the street to her apartment to get her other young children,” Elverum explained.

“There was a lady standing on the sidewalk who had watched the whole ordeal. She introduced herself as a ‘retired daycare provider,’ and offered to watch her other kids until she could come back.”

Bert said she had never seen the woman before and still does not know who she is. “I just moved into town.” But she is grateful for that woman’s assistance, as well.

“I’m speechless,” Bert said of the valiant efforts of her new community.

She is at a loss as to how to express her gratitude to Beard-Groom. “‘Thank you’ is not enough.”

Bert said she’s had a rough go of it lately, caring for children who have special needs and living at eight different homeless shelters. She recently obtained a housing voucher to move into the apartment.

When the incident occurred, her 15-year-old was in school. Her 7-year-old does not currently live with her.

Willow’s way into the world was also difficult, said Bert, who has a blood disorder that prevents normal clotting. She had gestational diabetes during her pregnancy and Willow had fluid on her brain. Willow is small for her age — about the size of 7 month old, Bert noted. “She’s my miracle baby.”

That applies even more now.

Bert said she is not sure how Willow choked, but said the 11-month-old had been eating yogurt melts.

Food is the most common cause of infant choking. However, small objects and certain types of behavior during eating — such as eating while distracted — also can cause infant choking, according to the Mayo Clinic.

It is a common cause of injury and death in young children, primarily because their small airways are easily obstructed. It takes time for babies to master the ability to chew and swallow food, and they might not be able to cough forcefully enough to dislodge an airway obstruction.

“You don’t hear too much of good these days,” Bert said, adding that wants everyone to know about the “angel” who saved her baby’s life. “I thank her from the bottom of my heart. Bless her.”

Elverum said Bert told her: “I can’t believe what kind of community I’ve moved into. I’ve never seen such helpful or welcoming people in my life”

“She’s absolutely right,” Elverum said. “I am so proud of our city and its citizens. This is what being from a small, tight-knit community is all about. We are here for one another. In a time when we seem to be divided, it’s these moments that ground us and make us realize what’s most important.”