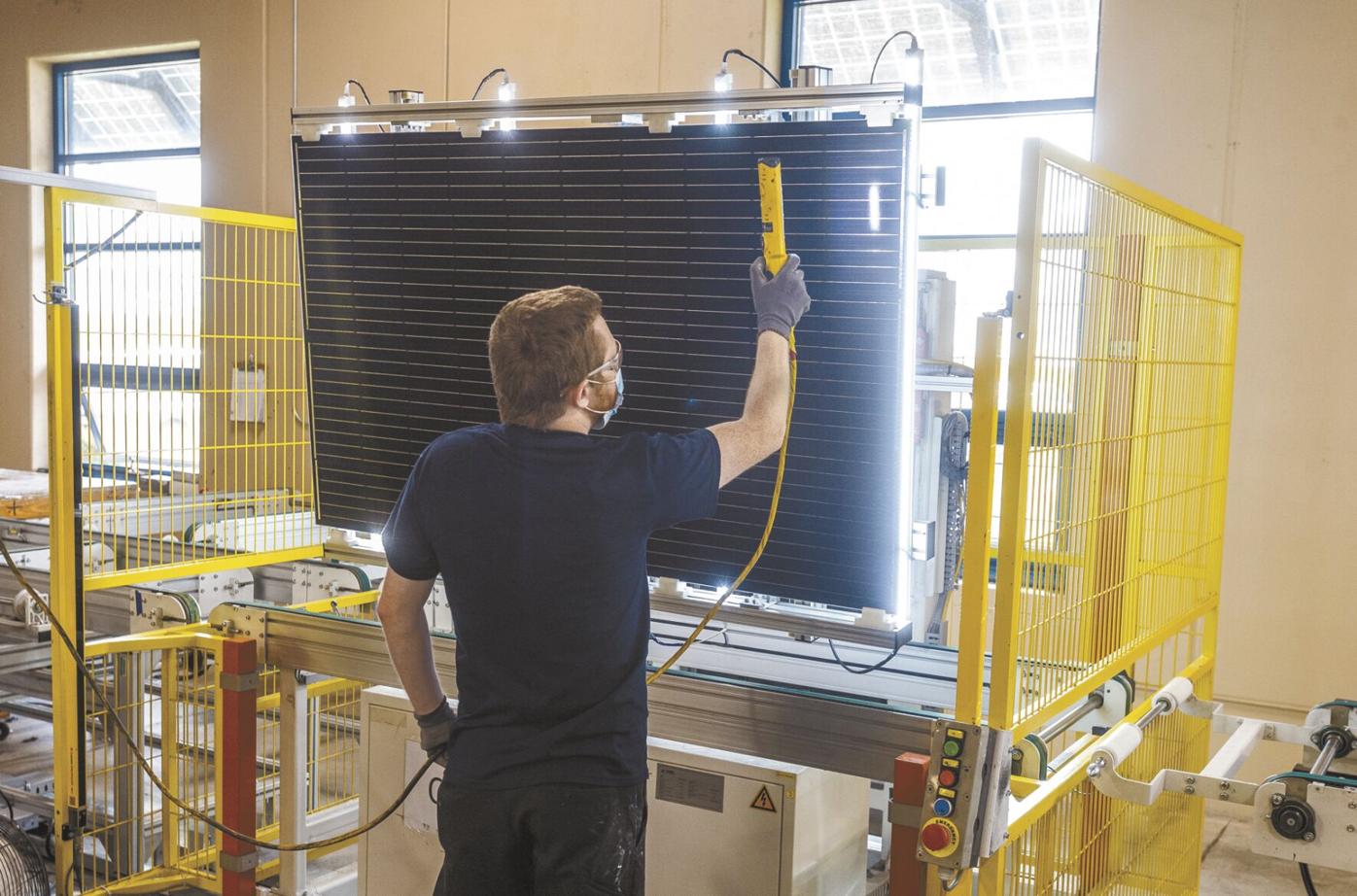 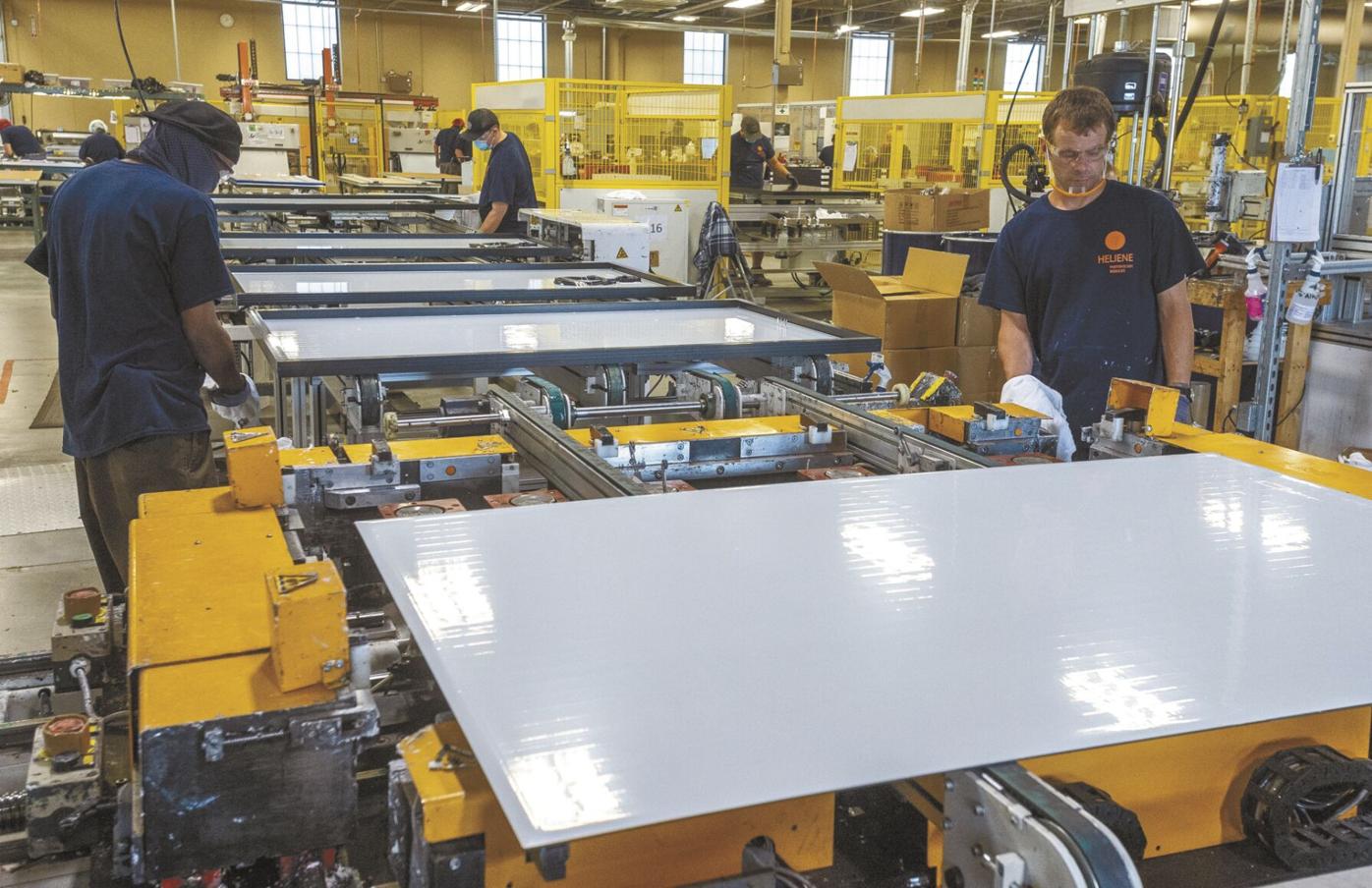 Frames are assembled around newly made photovoltaic modules Thursday afternoon at the Heliene Photovoltaic Modules plant in Mountain Iron. 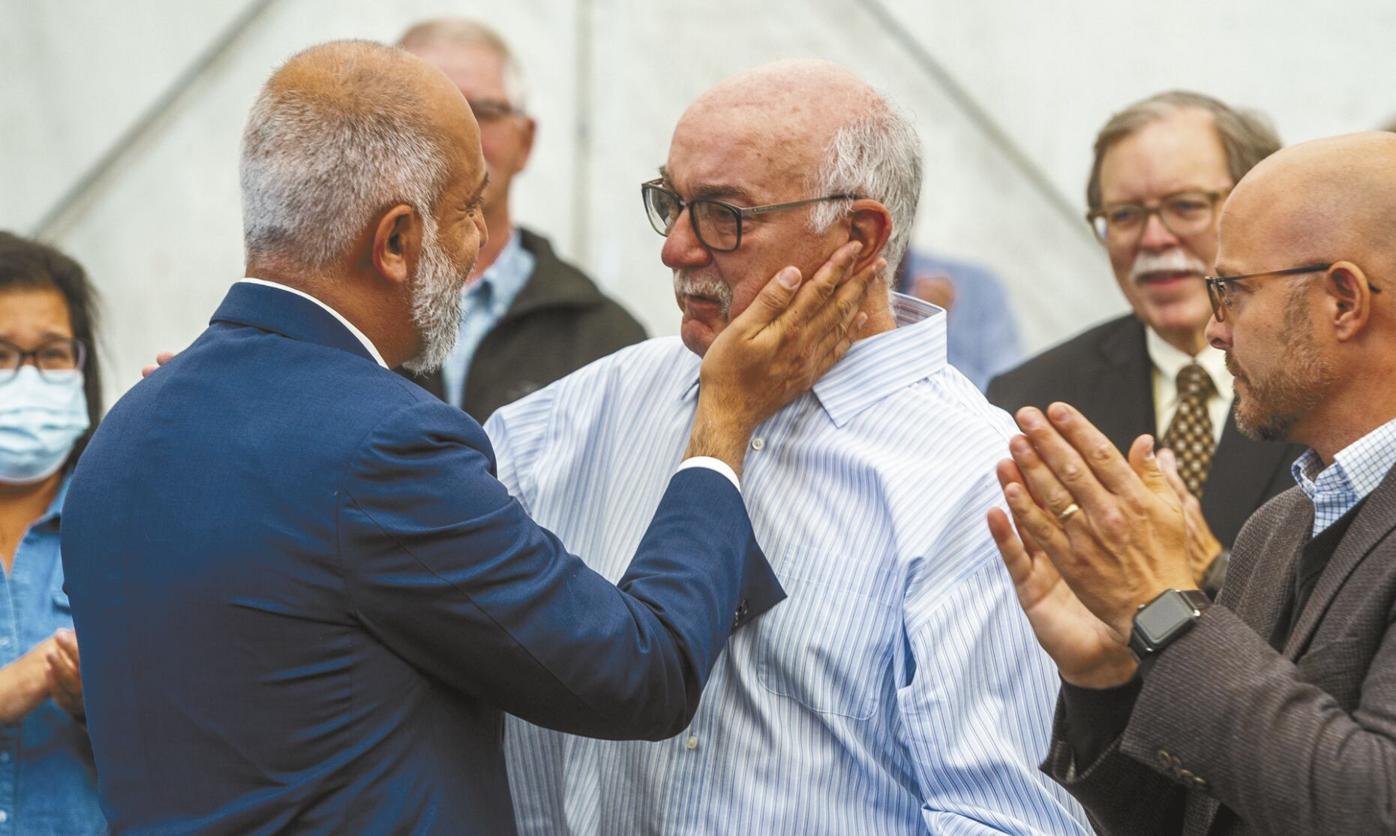 Heliene Chief Executive Officer Martin Pochtaruk hugs Senator David Tomassoni during a ground breaking ceremony Thursday morning for a new solar plant which the company is naming after the senator. 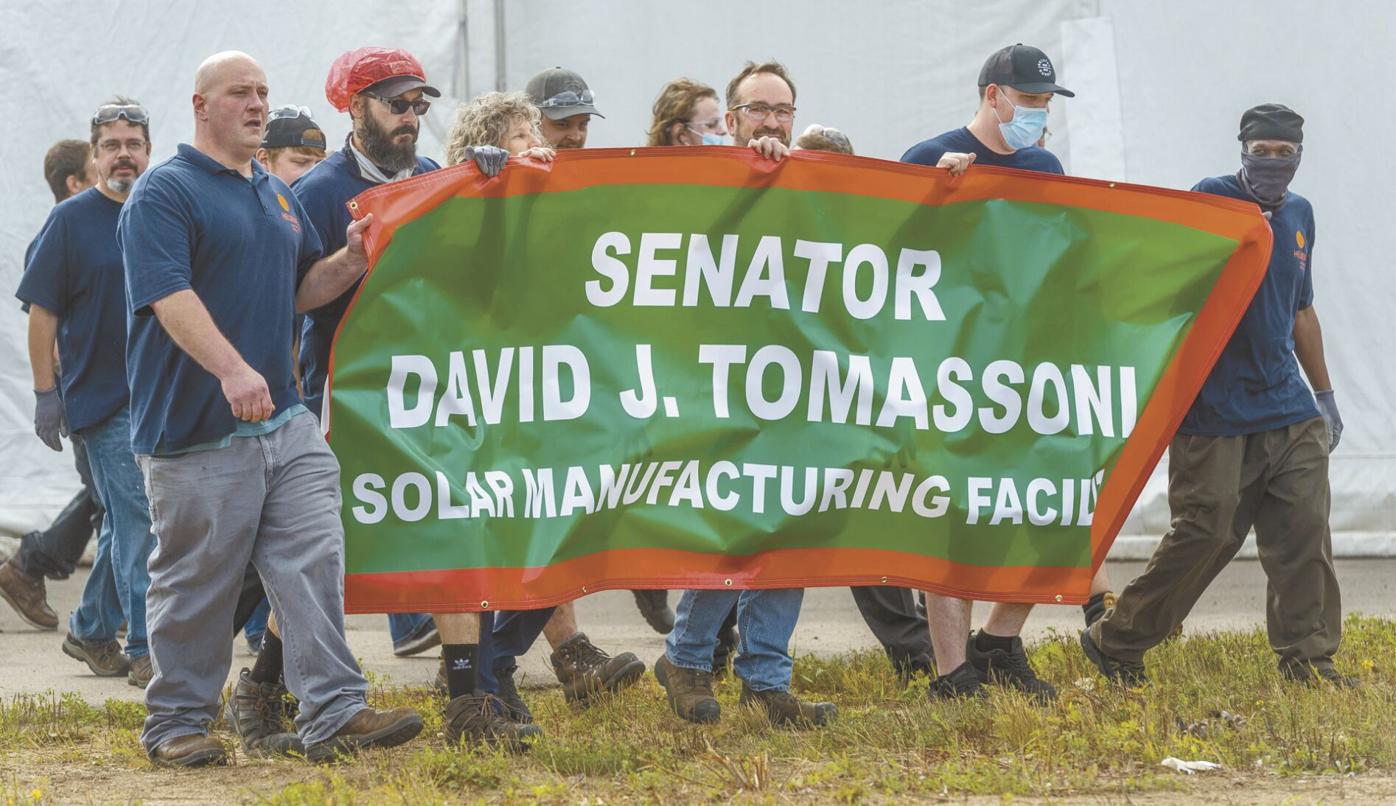 Heliene Photovoltaic Modules carry a banner to a ground breaking ceremony for the new Senator David J. Tomassoni Solar Manufacturing Facility which will be built in Mountain Iron.

Frames are assembled around newly made photovoltaic modules Thursday afternoon at the Heliene Photovoltaic Modules plant in Mountain Iron.

Heliene Chief Executive Officer Martin Pochtaruk hugs Senator David Tomassoni during a ground breaking ceremony Thursday morning for a new solar plant which the company is naming after the senator.

Heliene Photovoltaic Modules carry a banner to a ground breaking ceremony for the new Senator David J. Tomassoni Solar Manufacturing Facility which will be built in Mountain Iron.

It has kind of an electric sound to it.

The expansion will turn the facility into the second-largest producer of solar panels in America.

“I'm just overwhelmed having something like this named after me,” Tomassoni said. “There's about ten people here that could have their name on it. But I guess they picked me.”

The two men, both in tears, then hugged.

Construction of the expansion adjacent to its existing facility atop an old mine dump, is expected to start in September.

Full production is projected in June 2022.

Under the expansion, the facility will add a manufacturing line, storage space and grow to 95,000 square-feet. It will create 60 new jobs.

“As many have said, we are here today at a time when solar energy enjoys unprecedented support,” Pochtaruk said. “Our products made in Minnesota are the simplest renewable energy.”

For the Iron Range to have the second largest solar panel manufacturing facility in the nation, is a source of pride, Tomassoni said.

“We've been working on this a long time,” Tomassoni said. “I remember breaking ground when there was nothing here. I had my doubts whether it would get done, but it did.”

With the expansion, the plant will be able to produce 900 megawatts of solar power per year.

Heliene plans to sell all of the solar panels produced at the plant within the United States.

“The Iron Range has a history of doing industrial manufacturing that has changed the world,” Mark Phillips, Minnesota Department of Iron Range Resources and Rehabilitation commissioner said. “And we have that opportunity to do that again. This is diversifying the economy of the Iron Range.”

The existing building is owned by the Mountain Iron Economic Development Authority, which leases it to Heliene. The expansion will also be owned by the authority.

Area officials say the plant, along with the potential for mining the base and precious metals needed for green energy, puts the Iron Range on the cutting edge of green energy production.

“The Iron Range has so many opportunities,” Rep. Dave Lislegard of Aurora said. “When you look at this being the second largest solar producer in the country, we can lead the way.”

Tomassoni said the project could potentially make the PolyMet Mining Co. and Twin Metals Minnesota base and precious metals projects even more important.

St. Louis County Commissioner Keith Nelson said the county is looking at building one of the state's largest solar arrays.

“We don't just talk the talk,” Nelson said. “We walk the walk. I look forward to using panels made in Mountain Iron, Minnesota.

Some of the panels being manufactured in the plant will be used by Minnesota Power as it expands its renewable energy portfolio, Julie Pierce, Minnesota Power vice president-strategy and planning.

“Those panels you see there today are ours,” Pierce said. “They have a bi-facial panel that allows solar to be absorbed on both sides of the panel. This technology is very exciting.”

Pochtaruk thanked Tomassoni and others for supporting the expansion.

“Amid consistently strong solar demand and trade volatility, our customers seek peace of mind that they are receiving the highest quality, competitively-priced solar modules exactly when and where they need them,” Pochtaruk said. “The investment in this ultra efficient new manufacturing line will significantly increase the rate of American made module delivery while eliminating costly supply chain risks for customers.”