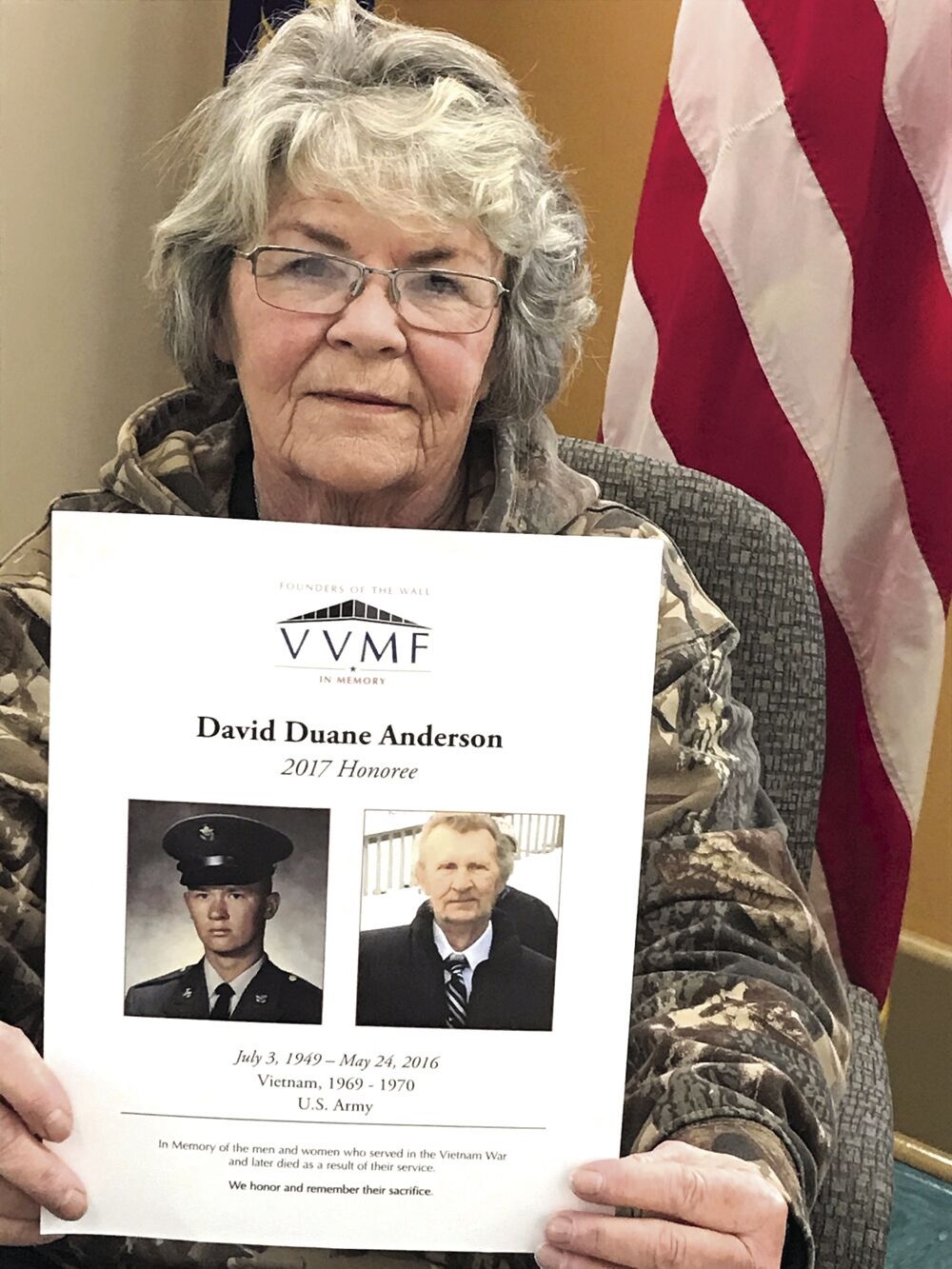 Mary Ann (Geist) Anderson of rural Gilbert holds a certificate that shows her late husband David Duane Anderson was an honoree for the Vietnam Veterans Memorial Fund. The honor is given in memory of those who served in Vietnam and later died as a result of their service. 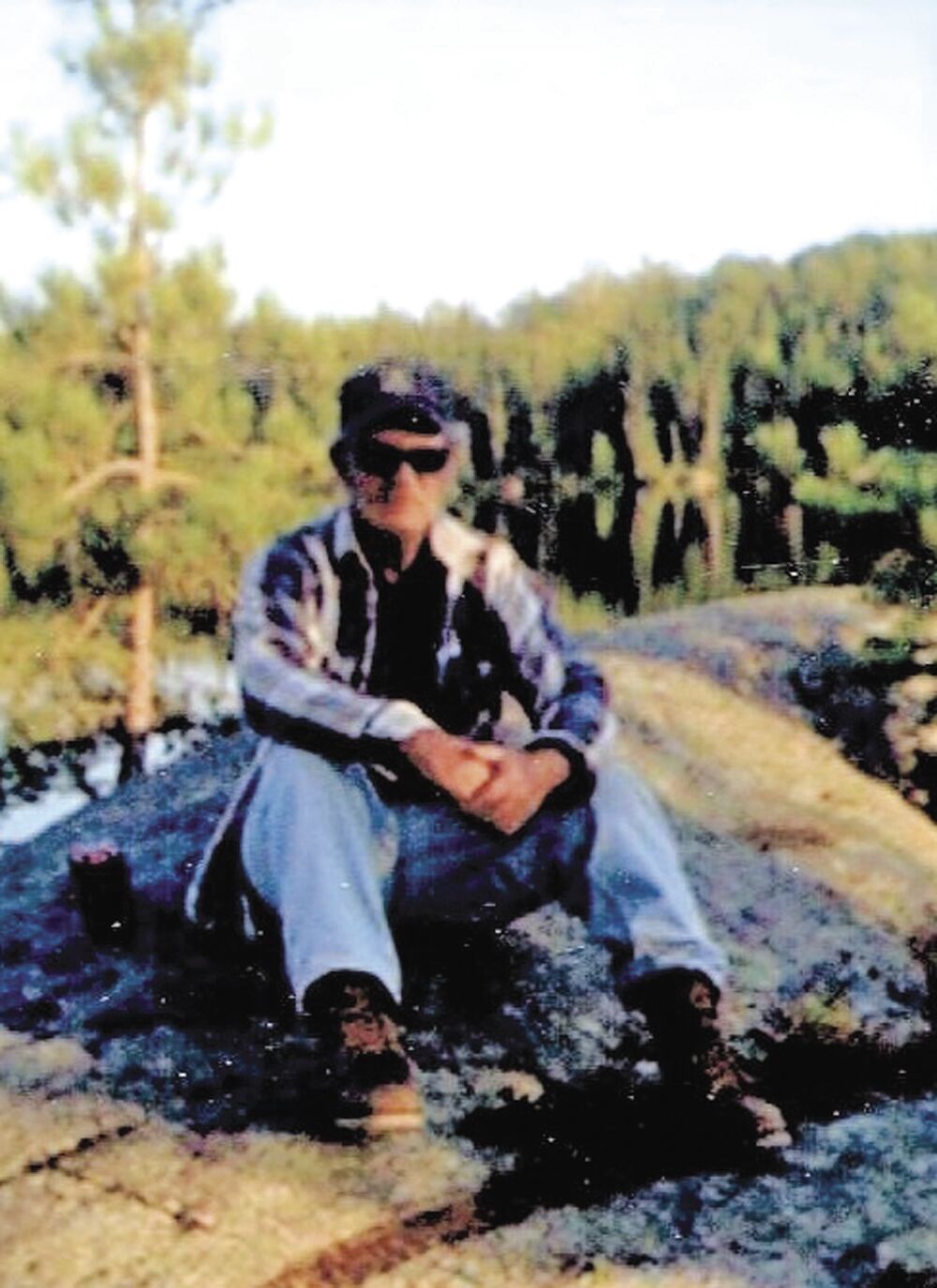 David Anderson, wounded in Cambodia during the Vietnam War and affected by his injuries the rest of his life, enjoyed the outdoors with his wife Mary Ann and their son Erick. 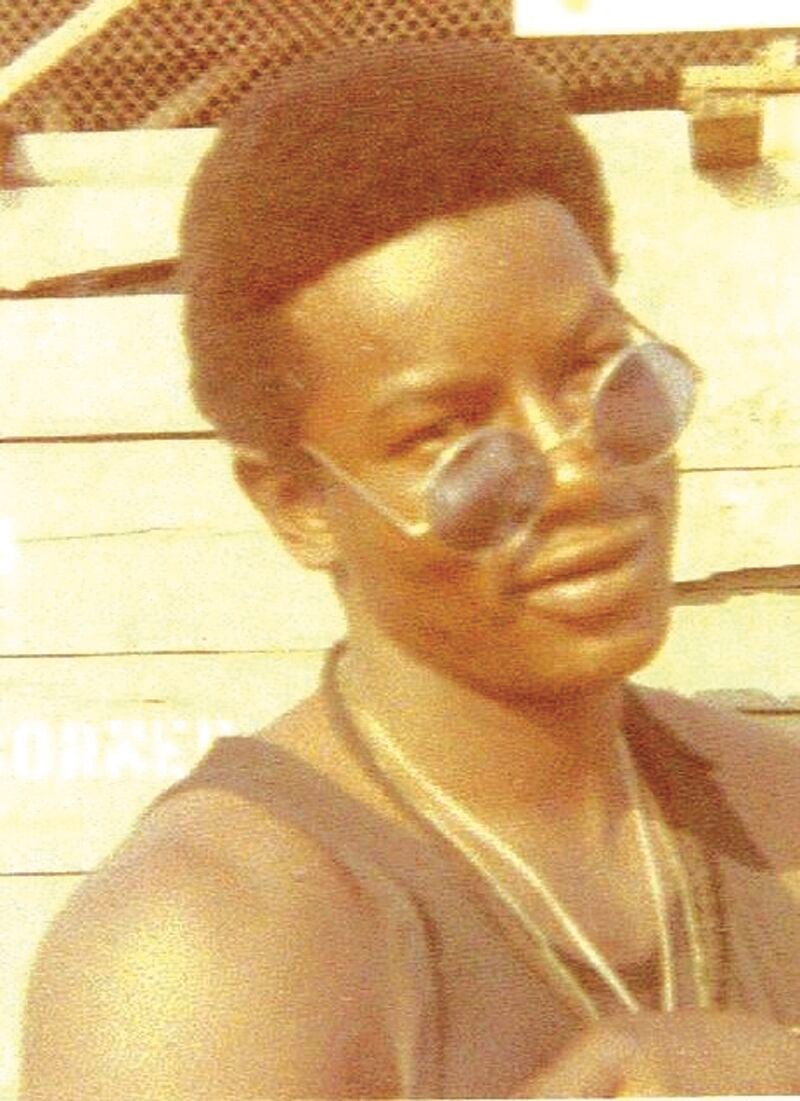 Johnnie Bowls, of Missouri, rescued David Anderson, wounded in a battle with the Communist North Vietnamese, and loaded him onto a Medivac helicopter.

Mary Ann (Geist) Anderson of rural Gilbert holds a certificate that shows her late husband David Duane Anderson was an honoree for the Vietnam Veterans Memorial Fund. The honor is given in memory of those who served in Vietnam and later died as a result of their service.

David Anderson, wounded in Cambodia during the Vietnam War and affected by his injuries the rest of his life, enjoyed the outdoors with his wife Mary Ann and their son Erick.

Johnnie Bowls, of Missouri, rescued David Anderson, wounded in a battle with the Communist North Vietnamese, and loaded him onto a Medivac helicopter.

GILBERT — David Duane Anderson, wounded Vietnam veteran, died the spring of 2016 at age 66. And for his wife Mary Ann (Geist) Anderson the memories are vivid still — especially how David survived a fierce battle in Cambodia thanks to a fellow soldier named Johnnie Bowls.

"Erick and I will be forever grateful," Mary Ann Anderson, of rural Gilbert, told the Mesabi Tribune. "Johnnie Bowls bravely carried David to the Medivac chopper. They were full and ready to leave" but Bowls insisted they transport David Anderson to safety. "We are forever indebted to him."

The Andersons had searched for years to locate Bowls, and ironically, Mary Ann was finally successful in locating him at an address in Missouri, but David had already died. David now would be 72.

When she reached Bowls by phone, he said, "Mrs. Anderson, I pray you're feeling well. This is Johnnie Bowls." And he told her he hadn't "thought about Vietnam since I left that hell hole" and "it immediately took me back to that firefight."

Anderson described how her husband recalled the battle. "The skirmish was awful. They (enemy North Vietnamese troops and Viet Cong) were hanging in trees and you couldn't see them. They were camo (camouflaged), and in the tall grass you couldn't see them. All of a sudden, they started popping out of the ground and jumping out of trees, David said. "They were everywhere." And he had told Mary Ann, the helicopter in which he would be carried was "the last chopper" out of there. David had served both in Vietnam and Cambodia, and in Cambodia was wounded May 29, 1970, and lost the use of a leg.

"I think about him all the time," Mary Ann Anderson said of her late husband, and it is especially so as Vietnam Veterans Day is observed annually on March 29.

She and David would meet in 1968, before he was drafted into the Army in 1969. Their first date was to the St. Louis County Fair to ride the Ferris wheel, and he would take her ring to Vietnam. After his return from Vietnam David and Mary Ann would marry in 1971 and they would have a son, Erick.

In 2017 David would be accepted into the Vietnam Veterans Memorial Fund, one of 412 honorees that year. Based in Arlington, Virginia, VVMF is the nonprofit organization authorized by the U.S. Congress in 1980 to build a national memorial dedicated to all who served with the U.S. armed forces in the Vietnam War. The result was the Vietnam Veterans Memorial (commonly referred to as The Wall), which has become one of the most visited memorials in Washington, D.C. The Wall has the names of the more than 58,000 killed in the war. Since the dedication of The Wall, VVMF has pursued a mission of preserving the legacy of The Wall. "It honors Vietnam veterans whose lives were cut short as a result of their service," she said.

Mary Ann Anderson told about the aftereffects of her husband's wounds — and how he maintained a kind, positive outlook on life. "A bullet traveled up the femur and when he was in a hospital in Japan, the bullet worked its way out of his leg." He was tranferred to Fitzsimmons military hospital in Colorado. "After 20 years he'd still be pulling out pieces of shrapnel — he was full of it. He wore a brace on his leg."

After his time in the Army, David would go to the Eveleth Area Vocational School to become a maintenance mechanic. He had worked at Erie Mining Company before being drafted, and later he worked for Gulbranson Excavating and various other places.

"Agent Orange is what started it all," she said of his multiple medical problems. "Ten surgeries, brain cancer, heart attack, stroke, broken back, liver bypass.... Even in summer his leg and foot would be ice cold."

In spite of seemingly insurmountable odds, he "kept plugging along" and from his nurses at Fitzsimmons Hospital in Colorado earned the nickname "Awesome."

And while David was hospitalized in Colorado, his father-in-law Clarence Geist Sr. planned a surprise family road trip to see David, who would spend nine months in a full body cast. "He was shocked to see me," Mary Ann Anderson said.

David loved the time he and Mary Ann and Erick would spend at "Camp David," their cabin on a small lake in Embarrass. And he enjoyed all things outdoors — deer hunting, fishing, snowmobiling, four-wheeling and trapping beaver, otter, fox, coyote, marten, fisher, muskrat. He was very active with the Minnesota Trappers Association and as his wife said, would spend hours nailing animal pelts on boards to dry. Mary Ann soon joined her husband in the trapping ventures. Often they'd have bonfires at the cabin, "food, friends, fun and fire."

"He was a character," she said. "He was a jokester. He could tell tales. He had so many stories to share... until he had the two brain surgeries. No one was ever a stranger to him. Though he was in pain daily, it never stopped him from enjoying the people he loved. He never gave up."

He would talk about the movie 'Good Morning, Vietnam,' (a true story about a radio announcer n Vietnam starring Robin Williams, and how the film presented a most realistic of life during the war.

"He always said 'Soldier on!'" she said, and he did. She recalled the night before he left for his tour of duty in Vietnam. "We took a ride. He stopped in the alley behind my house. The song 'Leaving on a Jet Plane'... 'Don't know when I'll be back again' was playing on the radio... to this day I cry."

She is proud to be the wife of a Vietnam vet. "They didn't want to go, they did go and come back, they were treated like garbage, called baby killers. He would say, 'We didn't have a choice.' It took a toll, that's for sure."

The last time he was in the hospital in Duluth it had been David's dream that "he'd be walking with a walker on our anniversary," but it was not to be.

She remembered David telling her on the evening of May 23, 2016, to head home and let the dog out — and asking if she would be visiting him the next day. And she said, "Of course I am. I love you. You just get better."