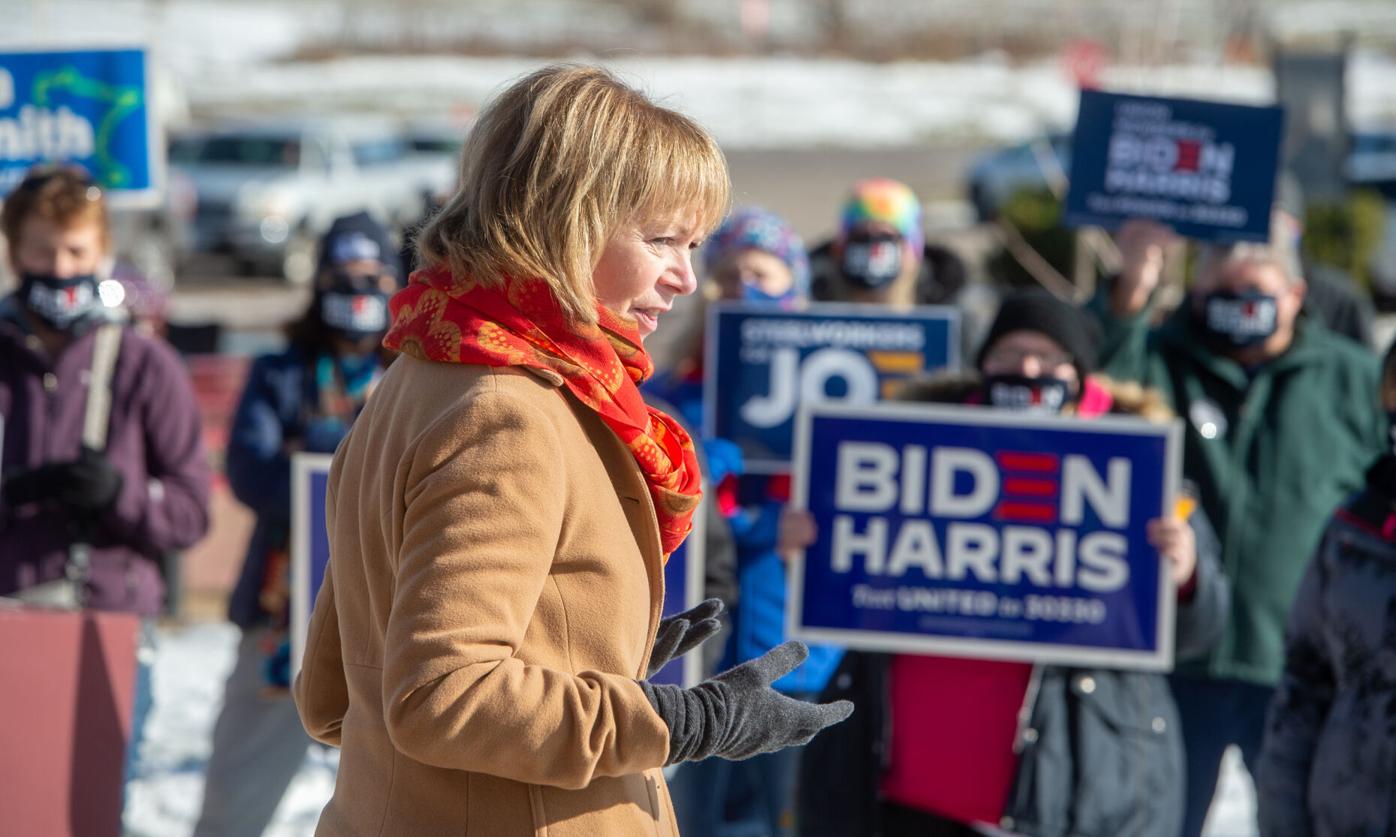 Senator Tina Smith talks to the crowd attending Thursday’s rally in Chisholm encouraging them to vote and the importance of next week’s election. 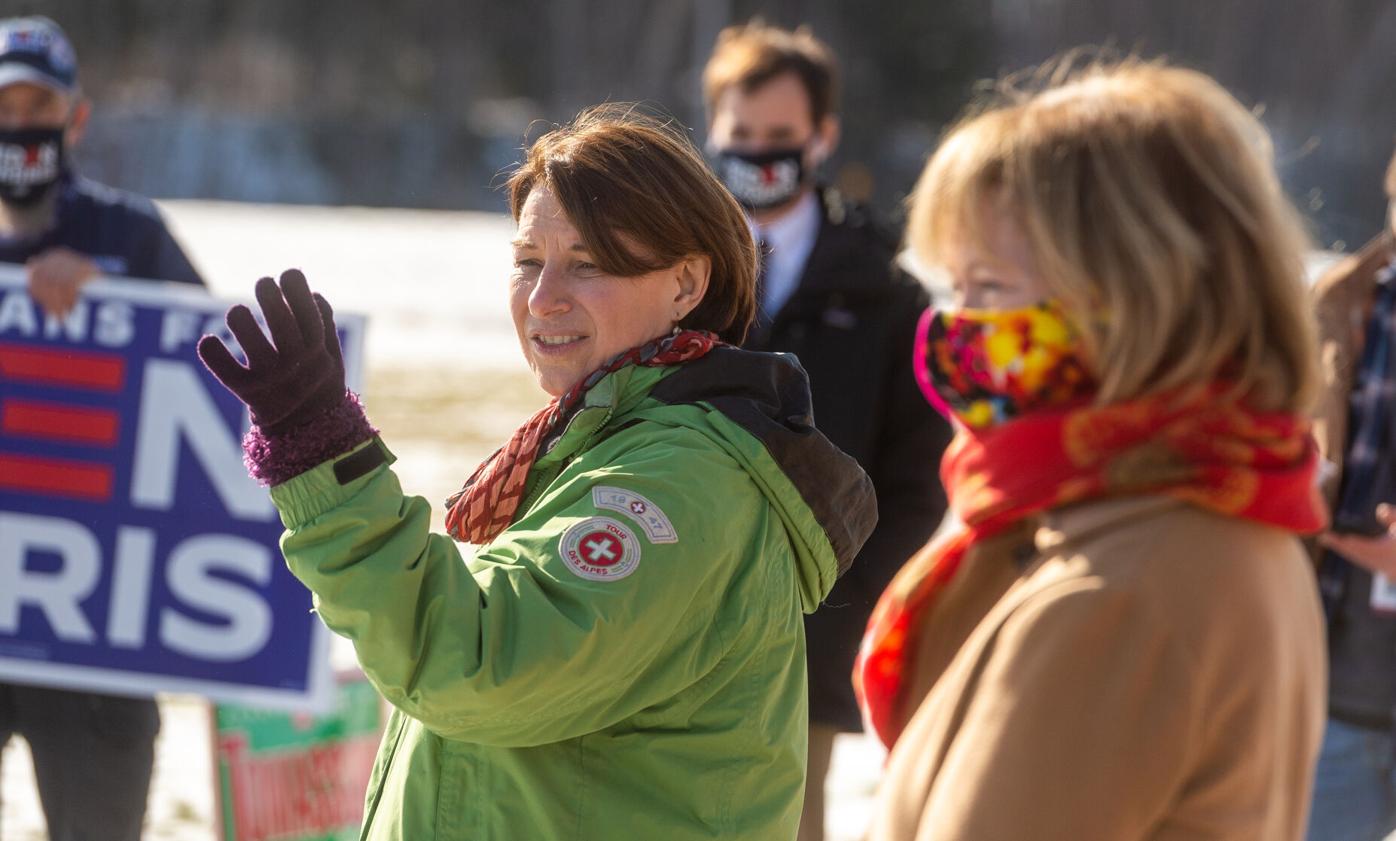 Senator Tina Smith talks to the crowd attending Thursday’s rally in Chisholm encouraging them to vote and the importance of next week’s election.

CHISHOLM — U.S. Sen. Tina Smith tried to energize supporters on Thursday, five days ahead of Election Day, by portraying herself as a politician in touch with the regional issues of mining, broadband and prescription drug costs — and made a final effort to distance herself from her Republican opponent, Jason Lewis, who has garnered votes in a growingly divided region.

“On the one hand there’s a message of fear and division and chaos and the need to turn against one another,” Smith told a crowd of several dozen masked individuals standing before the Iron Man statue in Chisholm. “That’s the message that the president is putting out there and that’s the message my opponent is putting out there, too. And then we have what we know we need to do, which is to lift up the best of one another, to come together and solve the problems that we have in this country and in this state and in northern Minnesota.”

Smith deemed the GOP’s promises as mere lip-service during recently held rallies held in local communities. “Where are they when we have idled miners in Keetac who are worried about their unemployment running out?” She asked where Republicans were on the issue of illegal steel dumping and made references to U.S. Sen. Amy Klobuchar, who stood beside her at the rally, noting that Smith, the lieutenant governor at the time, had worked alongside former President Barack Obama and Vice President Joe Biden in 2015 when the administration implemented tariffs on steel imports.

She reminisced about her father being from northern Minnesota and how her grandfather was an iron-ore miner in the region. She pointed out several individuals in the crowd, including leaders from AFSCME and United Steelworkers — two unions which have endorsed Smith for another term in the senate, her campaign team said.

She mentioned that both her father and husband had tested positive and since recovered from COVID-19 earlier in the year. She emphasized the need for Biden to win the presidential election, since she believes he would be able to get a handle on the rising cases of the coronavirus that has made its way to rural areas of the state. “We need someone that isn’t just getting up every morning and writing mean tweets. It’s easy to divide people.” She added, “We don’t have time for the divide and the meanness. We have to be together as one team to get through this pandemic to get to the other side of it.”

Democrats have spent months holding campaign rallies on the Iron Range, a historically blue region that has shifted toward the Republican party in recent decades, most strikingly since in 2016.

Smith was appointed in 2017 after former Sen. Al Franken resigned over sexual misconduct allegations. Against Housley in 2018, Smith carried St. Louis County with 61 percent of the vote and won on the Iron Range averaging more than 50 percent of voters, but lost 48-46 in the Eighth Congressional District. But Smith, in 2018, fended off Republican State Sen. Karin Housley in a special election to finish the last two years of the Senate term.

As Smith rallied voters in Chisholm, Lewis, a former congressman, was released Wednesday from Fairview Range Medical Center in Hibbing after a two-night stay for emergency internal hernia surgery.

Lewis was admitted to the hospital Monday for what his campaign described as a potentially life-threatening abdominal hernia if not treated quickly. He underwent successful surgery the same day. Lewis was in the area to attend a rally with Vice President Mike Pence at Range Regional Airport, which he missed due to the medical emergency.

In his stead, surrogates have hit the campaign trail for Lewis, including Donald Trump Jr. who appeared in Minnesota Tuesday for a fundraising event. Mike Lindell, the founder of My Pillow and potential Republican gubernatorial candidate in 2022, also hit the trail for Lewis. As did North Dakota U.S. Sen. Kevin Cramer and Tennessee U.S. Sen. Marsha Blackburn, among others.

Lewis said in a Wednesday statement that he still needs time to fully recover, but he will be working “as hard as I am able” in the final stretch toward the Nov. 3 election.

"I would like to thank Dr. Wendell Smith and the entire ICU staff at the Fairview Range Medical Center in Hibbing for safely performing my emergency surgery and also for the stellar care I received afterward,” he said. “I would also like to thank everyone who prayed for me and sent well wishes. I am walking, feeling well, catching up on work, and on my way back home to Woodbury.”

Lewis has focused his campaign in Greater Minnesota and his campaign team said in an email to the Mesabi Tribune on Wednesday night that the former congressman has put on more than 40,000 miles with 30 trips to the Iron Range.

"It’s that time of year again when Senator Tina Smith dusts off the map and makes her annual trip to the Iron Range,” Lewis said in a statement Wednesday night. “But Northlanders know better. Democrats like Senator Smith have abandoned the Iron Range, and now Iron Rangers are abandoning Democrats.”

At Smith’s rally, Dave Langfeld, of Chisholm, held a “Jason Lewis U.S. Senate” away from the statue and closer to Highway 169 when saying that he had voted blue for local elections and backed the late Jim Oberstar, a Democrat who served in the U.S. House of Representatives. But then he voted for Trump in 2016 and for U.S. Rep. Pete Stauber for the Eighth Congressional District in 2018, which makes him the “only Republican in a family of all union Democrats.”

Langfeld planned to vote for Lewis in the senate race since he is “pro Second Amendment, pro-life and pro-mining.”

His neighbor, Stephanie Holewa, and her two young sons agreed with his views while helping to unload signs off the back of a truck before the rally. “We are here supporting our way of life,” she said, using one of Stauber’s campaign phrases echoed by Pence during his rally earlier in the week. Holewa’s husband is a steelworker and she believes that a vote for a Biden-Harris ticket would mean the implementation of the Green New Deal. “That would kill out mining and our livelihoods,” she said. “It’s going to dissipate everything we’ve worked for here.”

Kelly Koski, whose father and boyfriend are miners, carried a sign near her two friends whom she met at local GOP rallies and events. Similar to Langfeld, she described how she had voted for Democrats before switching aisles to support Trump and then Stauber. “I started looking at my family values,” she said, adding that she plans to vote for Lewis for senate. “Tina is pro-choice,” she said. “She’s part of the radical left.”

Standing on the outskirts of the Democratic crowd, John Arbogast, a staff representative for USW District 11 overseeing five mines in the region, said he has known Smith since she was lieutenant governor and as senator has been in-tune with the fact that U.S. Steel Keewatin Taconite remains shut down and more than 200 workers may lose unemployment benefits in the upcoming weeks. “Tina has always been a great friend to the United Steelworkers,” he said. “She’s a great friend of the Iron Range. She’s a great senator and we need her to win this election because she’s always there for us.”

Arbogast, who denied comment on the congressional race, said the USW leadership backs Biden but many union members continue to voice their support for Trump. “They can vote for whoever they want to, but we are just looking at what President Trump and the National Labor Relations Board has done to the union in the last four years and it has affected our collective bargaining rights and organizing rights and we need people in office who are going to stand up for the middle class and Iron Range miners.”