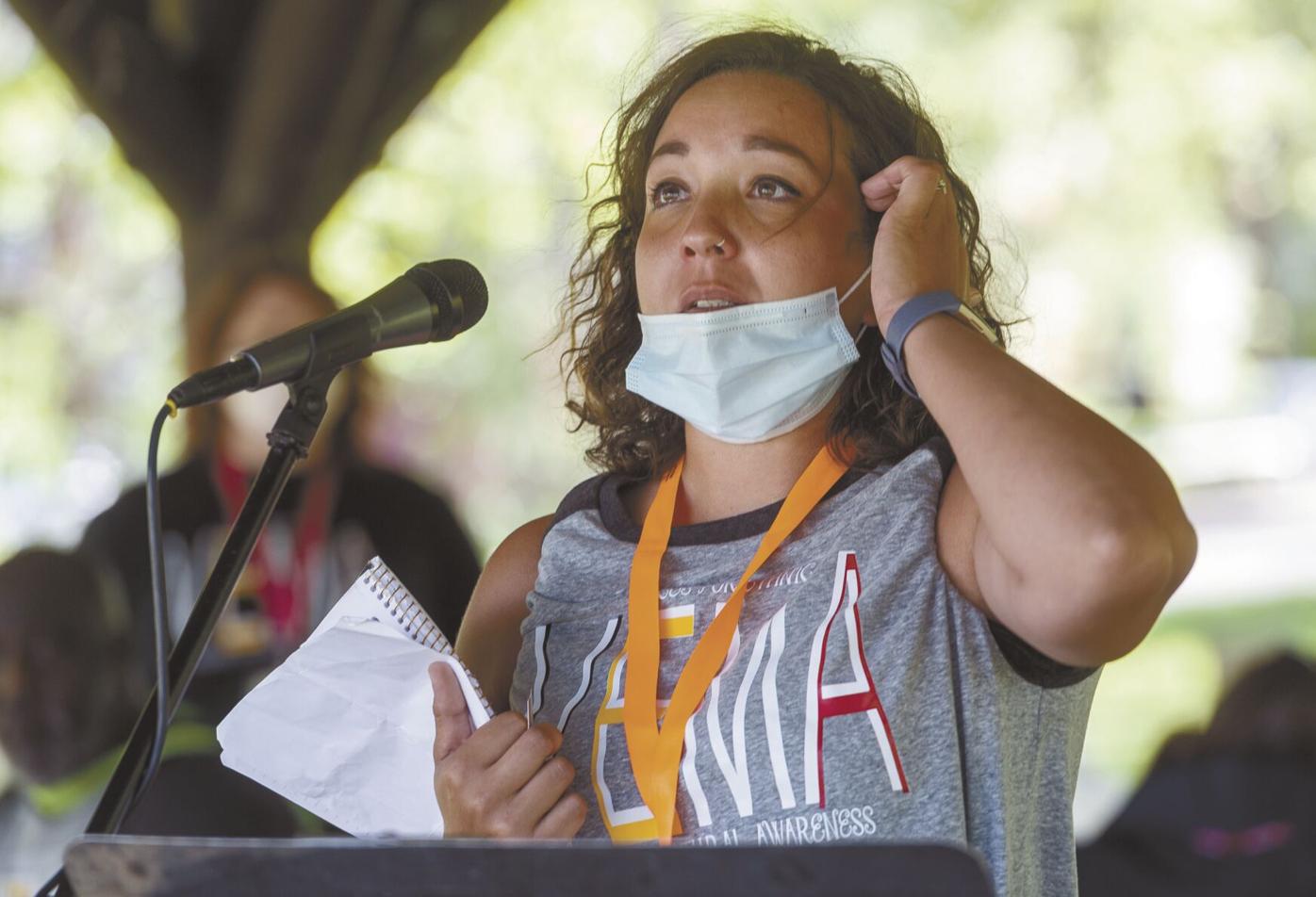 VEMA rally co-organizer Elizabeth Allen talks about her experiences with race relations during a community get together Sunday afternoon in Hibbing’s Bennett Park. 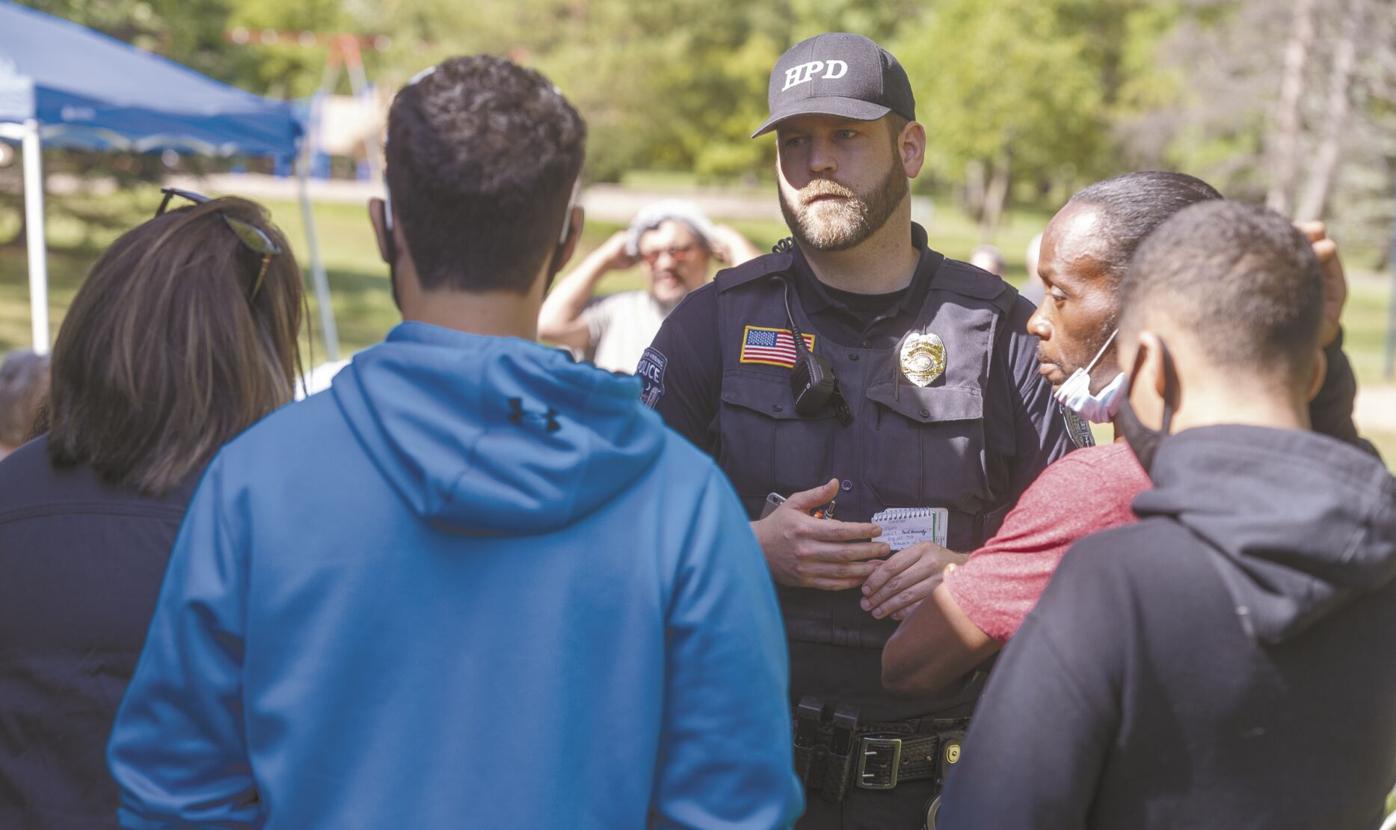 VEMA rally co-organizer Elizabeth Allen talks about her experiences with race relations during a community get together Sunday afternoon in Hibbing’s Bennett Park.

HIBBING — Elizabeth Allen fought back tears as she recalled her 4-year-old daughter facing racial discrimination on the Iron Range.

“She told me she didn’t like that her skin was brown and she wanted it to be pink,” said Allen, a biracial woman who endured similar experiences growing up in the predominantly white region. “That hurt me more than anything. She has this idea that her brown skin is bad. That’s when I knew that I had to do something.”

In response, Allen, a bartender in Hibbing, became one of the founding members of Voices for Ethnic and Multicultural Awareness of Northern Minnesota (VEMA), a group of citizens who seek to work with law enforcement to educate their neighbors about racism and prejudice in local communities.

In Hibbing, a city that is about 95 percent white, Allen stood before a crowd of nearly 100 citizens identifying as Black, Asian-American, American Indian and Hispanic who attended the first ever VEMA rally held in Bennett Park on Sunday. “I’m here fighting for my children.” she said. “I’m fighting for all of our children putting up with discrimination in our country.”

For weeks, the founders of VEMA, including Allen and Seraphia Gravelle, have been working with the Hibbing Police Department and members of its newly formed Anchoring the Blue Task Force. The task force banded together in the aftermath of George Floyd demonstrations across the state and in small cities of Chisholm, Hibbing, Virginia and Grand Rapids. For people of color, the local protests were opportunities to come together, many for the first time, in speaking about their run-ins with racism and police brutality. While most citizens in the region have been largely supportive of such efforts, others have criticized the gatherings, and some have taken to driving by rallies to yell racial epithets at protesters — a reality that forced one Black child in Hibbing to leave a local event early since they feared for their well-being.

Area groups of mostly white residents have since hosted a “Support the Police” rally in Hibbing, with some backing the Thin Blue Line, which remain points of concern for people of color since the symbol was worn by white supremacists and neo-Nazis who stood next to Confederate flags in 2017 at the “United the Right” rally in Charlottesville, Va. More recently, mostly white business owners and citizens say they are engaging in a non-political initiative to erect billboards and signs in support of law enforcement in the region.

During the live-streamed rally over the weekend, Gravelle, who is a Hispanic woman now living in Keewatin, welcomed the people of color who decided to share their experiences. She also gave thanks to the members of VEMA and the task force and expressed her appreciation for the city councilors and police chiefs and officers who showed up in support.

“There’s been far too many experiences of racism in our community that largely go unreported,” Gravelle said. “...We want change. In order for us to push for change in our community, we need to hear their stories to understand the change that is needed.”

Hibbing Police Chief Steve Estey attended the rally, in addition to police chiefs and officers from Chisholm, Virginia, Keewatin, Nashwauk, who say they saw the event as a chance to improve communication in their communities. (Grand Rapids Police Chief Scott Johnson previously said he would not attend the rally, saying he defended “people’s rights to have those things, but we’re not getting involved in this whole public debate.”)

Estey, who became the police chief in Hibbing in 2019, expressed his goal of “working together” with VEMA and addressed citizens of all ethnic and racial backgrounds when saying that his officers “stand with all of you.”

“What happened in Minneapolis, my police department does not condone that in any way,” Estey said. “And that will never happen in this community. If it does, there will be accountability and that will be taken care of.”

His words ignited applause from VEMA members, they say, since it was the first time he clearly denounced the white officer who killed Floyd.

Historically, the Iron Range has been home to the Anishinaabe and people claiming Italian, Slavic and Scandinavian and Nordic heritage. In more recent years, the small string of towns nestled amid iron ore mines, forests and lakes have been populated with a growing number of Black, Latinx and Asian-American residents.

The communities here are anecdotally known for being tight knit and wary of outsiders, a reputation that manifests in the political infighting among a perceived statewide rural and metro divide and a north and south separation of ideals in St. Louis County.

For the most part, small town mayors, city councilors and law enforcement have not come across racially charged situations that have occurred in Minneapolis. The Hibbing Human Rights Commission has been disbanded and churches, schools and citizens do not address, by-and-large, the everyday experiences of people of color.

Here, there are incidents of Black citizens being pulled over by police officers who say they “fit the description” of criminal suspects, and being called racial epithets in stores or sitting outside their homes in Hibbing only to see people drive down main street waving Confederate flags from their vehicles, as a group of individuals reportedly did the day before the rally. There are other cases of racial discrimination, more subtle but equally as hurtful, in the glares endured by Asian-Americans during the times of COVID-19 or the fact that schools lack a wealth of Indigenous history lessons in the educational curriculums.

At Bennett Park, Allen noted that she helped kick-off the VEMA rally in hopes of opening up a dialogue.

“A majority of the people here are not racist, but in order to make change we have to make it known that this is happening,” she said. “We are just like everyone else. We want to make a life for our families on the Iron Range.”

In his remarks, Estey said that his department “can’t change the past” but his officers “can definitely mold the future.”

“I want everyone to walk out in the streets no matter your sexual orientation or color knowing you're safe and my officers will have your back,” he said, inviting people to visit him at his office if they experience any incidents of racism or prejudice. “I do have to ask you all as well, I want you to have my officers’ backs, too. They’re men and women just like you that have families and they put their lives on the line everyday.”

He continued, “Yeah, there are bad police in this country, but we want ours in this community to lead by example in a positive way.”

At one point, police officers and politicians, mostly white, joined VEMA members in a moment of silence lasting 8 minutes 46 seconds, a symbolic timestamp of police brutally in connection with the death of Floyd, a Black man who died under the knee of ex-Minneapolis police officer Derek Chauvin.

“That seem like a long time?” said Nathaniel Coward, a Black man who is a member of VEMA and the Anchoring the Blue Task Force. “Look at your kids, your mothers and fathers. Imagine a knee in the back of their neck. It took that long. When people ask why we do this. This is why. If you can stop the unjust murder by police, it’s for everyone, not just for Black people.”

Coward, who has lived on the Iron Range since attending Vermilion Community College in Ely decades ago, called on absent church leaders to join the effort and thanked law enforcement for attending the event.

“The only way we’re going to get through this is getting together,” Coward said.

Sitting in the park, Dana Butler, who is a white woman from Grand Rapids, said that she came to the VEMA rally since “the work that needs to be done just can’t be from people of color and this needs to be supported.” She added, “I want to learn.” Beside her, Bethel O’Brien, a white woman who lives in Chisholm, echoed her sentiments, saying “everyone has to work together and be united if change is going to happen.”

Coward made a plea with his neighbors who have been dismissing the protests. “People say they’re tired of hearing about this here, but think of us being tired of living it,” he said. “There is a growing number of people of color in this community.”

He asked that they listen to the stories and to consider ways of joining in the dialogue.