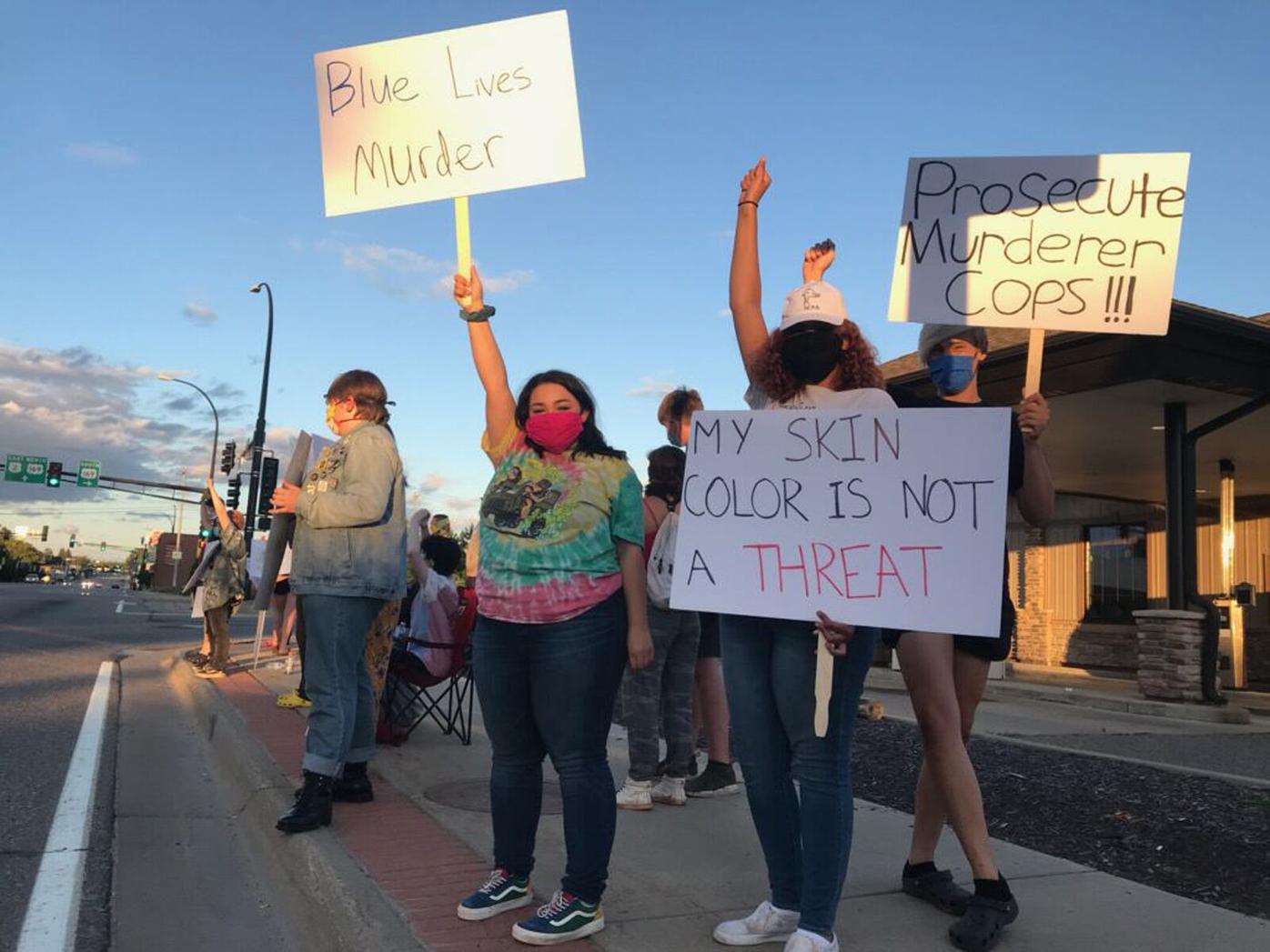 Megan Phillips (middle), a 21-year-old leader of the Itasca County INDIVISIBLE from Coleraine, stands among protesters at the Stop Police Brutality rally on main street in Grand Rapids on Tuesday evening. 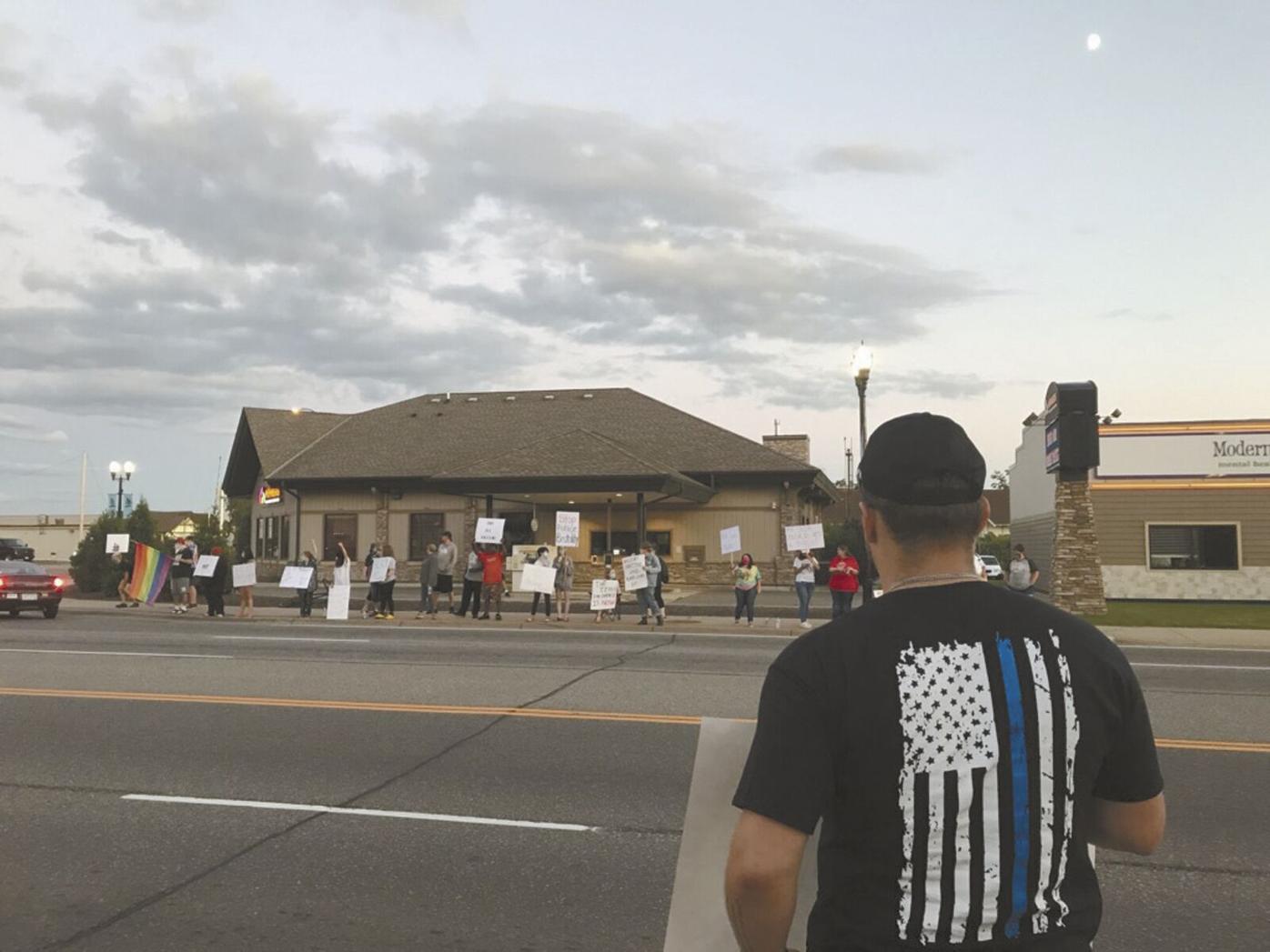 Jordan Norris, a 26-year-old military veteran from Reimer, wears a Thin Blue Line T-shirt at the Back the Blue protest in Grand Rapids, where his mother is a police officer. He stands beside protesters in front of Old Central School on the opposite side of the street from the separate group speaking out against police brutality.

Megan Phillips (middle), a 21-year-old leader of the Itasca County INDIVISIBLE from Coleraine, stands among protesters at the Stop Police Brutality rally on main street in Grand Rapids on Tuesday evening.

Jordan Norris, a 26-year-old military veteran from Reimer, wears a Thin Blue Line T-shirt at the Back the Blue protest in Grand Rapids, where his mother is a police officer. He stands beside protesters in front of Old Central School on the opposite side of the street from the separate group speaking out against police brutality.

GRAND RAPIDS — Hundreds of people rallied in support of law enforcement on Tuesday, punctuating a month of demonstrations scattered across northern Minnesota, but protesters against police brutality also emerged in a smaller group — on the same block in downtown Grand Rapids — leading to a few tense confrontations that drew the attention of officers.

The gatherings followed protests in thousands of cities across the United States after the police killing of George Floyd in Minneapolis in May. Protests have since manifested in the smaller communities on the Iron Range and to the immediate west in Grand Rapids, a city of about 11,000 residents in Itasca County. A Black Lives Matter protest sprung up in front of Old Central School, a historical landmark near the intersection of 4th Street and Pokegama Avenue, where protesters say they endured antagonizers who spewed expletives.

But Tuesday was the first time when two separate groups of citizens expressed their views on the same stage. The Stop Police Brutality protesters, many of whom were young people of color who wore masks, stood on the south side sidewalk of 4th Street in front of the Members Cooperative Credit Union, holding Black Lives Matter signs. Participants in the Back the Blue rally, mostly maskless and white, posted themselves on the northside of 4th Street before the looming building and rolling lawn. Nearly 400 people joined that group on the lawn and sidewalk directly across the street from the other protesters and held Trump signs and waved American flags, many redesigned to show the Thin Blue Line symbol.

Members of each group blamed one another for argumentative behavior and considered themselves victims of an unidentified driver who apparently attempted to hit individuals when they rode their vehicle onto the curb and onto the southside sidewalk of 4th Street. The incident prompted several people to call the Grand Rapids Police Department, which reportedly dispatched at least two officers to the scene. Itasca County Sheriff's Office and at least one Minnesota State Trooper made their presence known as well.

Megan Phillips, a biracial woman from Coleraine holding a “My Skin Color Is Not A Threat” sign, ended up calling members of the newly formed Voices for Ethnic Multicultural Awareness Northern Minnesota for support. Last weekend, she attended the first ever VEMA rally in Hibbing, where people of color and police officers banded together to address racial discrimination on the Iron Range.

Megan’s mother, Kim Phillips, a 54-year-old white woman who lives in Coleraine with her three biracial children, explained that she was one of the protesters who called 911 “to tell them that someone needs to be down here.” “My daughter is a fighter and I have her back,” she said. “But I’m afraid something will happen to her.”

Phillips and others standing beside her described how they saw drivers supporting their protest that night, but they also witnessed several ambulances, firefighters, and police officers drive by and put on their sirens and honk their horns for the rally on the opposite side of the street.

As a member of the Grand Rapids Community Advisory Committee, Phillips said she supported law enforcement but felt she was not being backed by local officials who in her mind continue to sit on the sidelines while she strives for change. She recalled Grand Rapids Police Chief Scott Johnson declining an invitation to the VEMA rally, saying he did not want to be “getting involved in this whole public debate,” as he told the Mesabi Tribune earlier this month.

“We came out here to be peaceful,” said Ginny Barsness, a white woman from Grand Rapids who claimed to receive threats on social media for organizing the Stop Police Brutality protest on Facebook. “There may not be a lot of people of color in Grand Rapids, but racism is an issue and it can happen here.”

Barsness, 39, said she was one of the protesters who contacted the local police department alleging that maskless Back the Blue protesters wearing pro-Trump gear crossed the street to their post and invaded their space and that adult white men were yelling at teenage girls, some who were Black and Hispanic.

By 6 p.m., many Back the Blue protesters had dispersed from outside the school building, but several remained, including 50-year-old Paula Dibb, a white woman who drove to town from the nearby city of La Prairie after reading about the event on Facebook. She recalled how hundreds of people had traveled across Itasca County to join in unison to express their support for law enforcement.

“I believe that police are important for the community,” Dibb said. It gave her comfort “to know that you’ll be helped regardless of creed or race.” She claimed that a member of the Stop Police Brutality group physically “hit” one of her signs with theirs and used “foul language” as she crossed the street earlier in the evening. “This side is very willing to educate and willing to listen.”

Gabriel Hager, a white man from Grand Rapids, shouldered a large Blue Thin Line flag while standing beside his mother to lift up a “Trump for President 2016: Make America Great Again” banner across their upright bodies.

Hager compared the raised clenched fist — a symbol which historically represents solidarity and has been used in Black Live Matter protests — to that of a swastika. But then he made several notes emphasizing that he “does not support racism.”

In Grand Rapids, there was no constructive dialogue between the two groups protesting and none of the local leaders showed up to take part in either event.

Republican Congressman Pete Stauber, a pro-Trump politician who served 23 years as a police officer in Duluth, did not attend the evening’s protests but posted pictures from the Back the Blue rally on his campaign Twitter page. He made no mention of the Stop Police Brutality protest. When the Mesabi Tribune inquired whether he supported protests from people of color, his staff replied via email and reiterated his social media post, saying “Pete stands with his brothers and sisters in law enforcement, appreciates what they do to keep our communities safe, and will continue fighting for our way of life.”

Johnson, the Grand Rapids Police Chief, could not immediately be reached for comment.

As 10 p.m. approached, La Prairie Mayor Jonathan Bolen, a 56-year-old white man originally from Detroit who claims Jewish descent, appeared with a face mask on 4th Street and engaged in energized debate with several VEMA members about racial discrimination and varying levels of dialogue between protesters and the authorities.

During a heated conversation between Bolen and Seraphia Gravelle, a founder of VEMA who lives in Keewatin, the mayor told her that he supported Black Lives Matter and invited her to speak at his city council meeting next week.

“We have to differentiate between Black Lives Matter and All Lives Matter,” he later told the Mesabi Tribune. “I don’t think there’s anyone on the sidewalk right now that doesn’t agree that all lives matter, but given the circumstances that have taken place over the last two months I think we as a society need to focus on why Black Lives Matter. We need to focus more of our efforts on that and understand that the systemic racism in this country needs to come to an end. Enough is enough. We need to voice that.”

The mayor of a city populated with 665 mostly white residents showed up “on his own accord” to the protests in Grand Rapids, he said. “Everyone has their own conscience, but I’m going to follow mine. This isn’t political. It should never be political. This is a movement based on identifying what America’s true character is.”

Bolen said he planned to talk about his experiences from that evening with the Grand Rapids Police Department, which enforces the law in his city. “We need to support the police, but we also need to support it in a way that will effect change and not blindly support it,” he said. “You can’t do that. If you blindly support any type of group, what you then do is support everything that they stand for and you’re not supporting change within the organization. That is a mistake.”