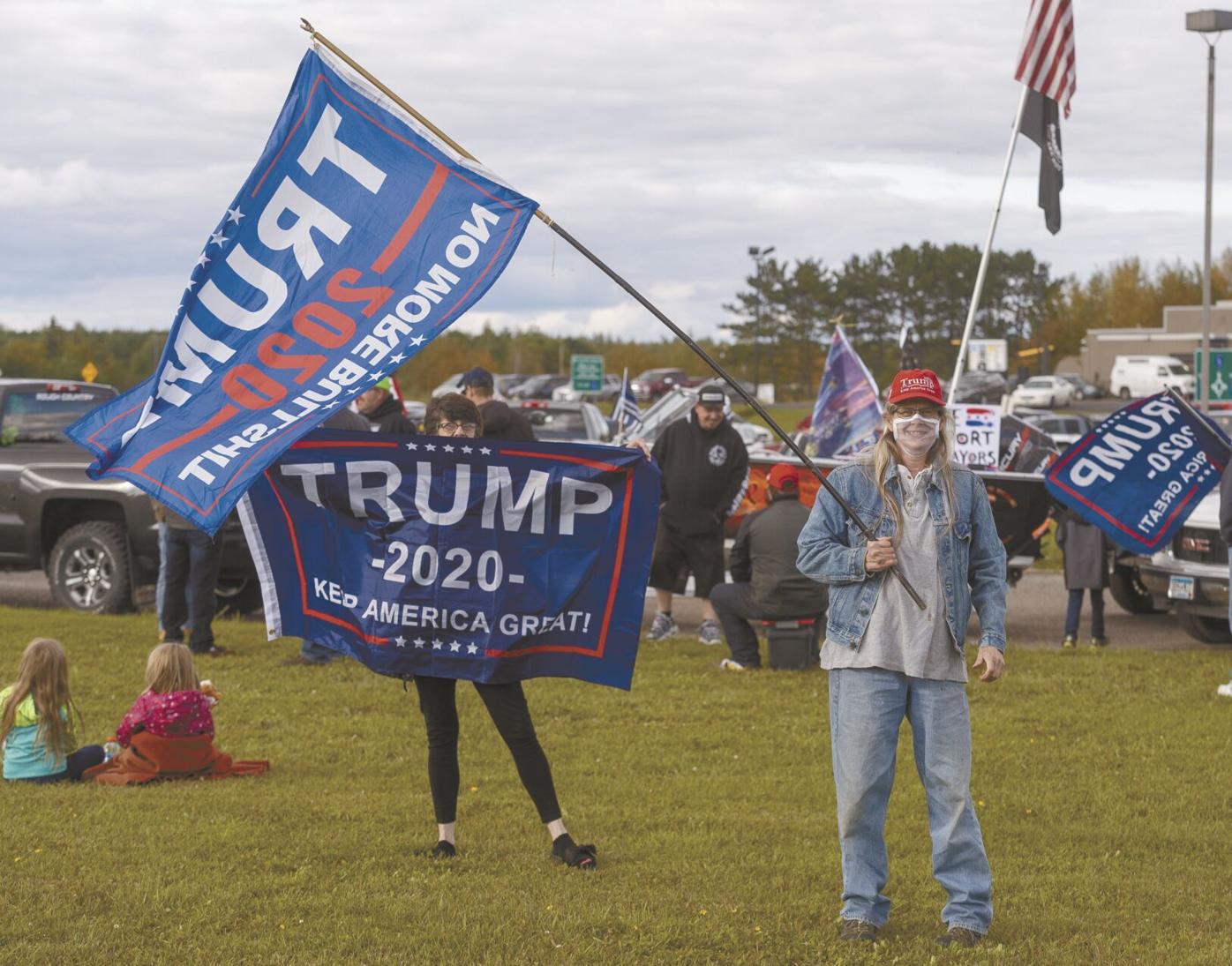 Donald Trump supporters who asked to be identified as Patty and Dawn hold flags near a rally Wednesday evening to support former Vice President Joe Biden. Patty and Dawn joined a small group of counter protesters near the Iron Man statue. 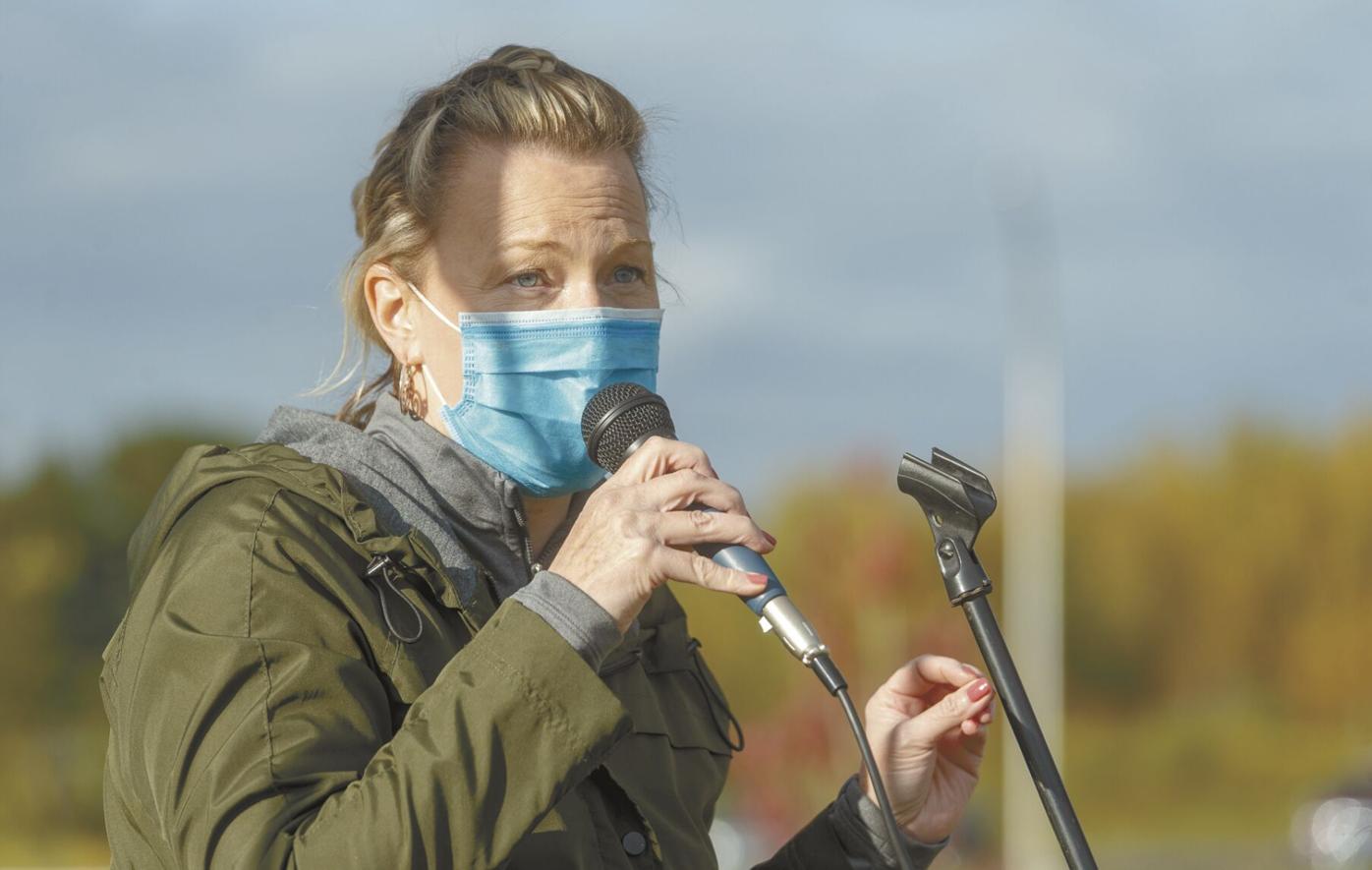 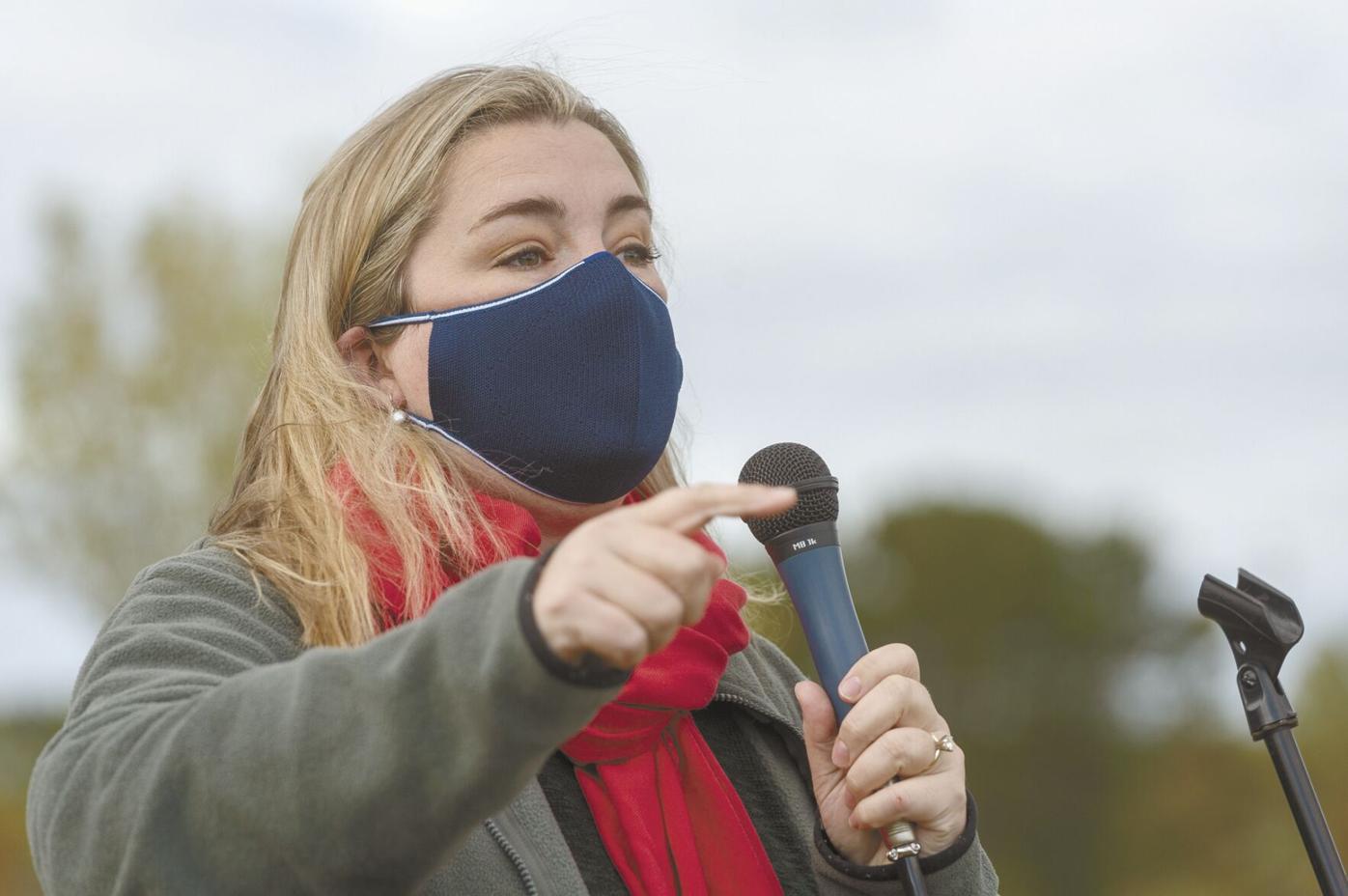 Donald Trump supporters who asked to be identified as Patty and Dawn hold flags near a rally Wednesday evening to support former Vice President Joe Biden. Patty and Dawn joined a small group of counter protesters near the Iron Man statue.

Cheryl Zgonc, a 55-year-old resident of Chisholm who helped organize a Facebook page named “Petition for retraction or resign,” said that she thought “it was offensive for the mayors to take it upon themselves to speak up for us.” She continued, “Each mayor put us in a situation where it seemed we supported Trump. That was out of line.”

A crowd of Democrats shared her concerns, as they banded together to speak out against the mayors and also to show their support for Joe Biden and Quinn Nystrom, the DFL candidate running against pro-Trump incumbent Congressman Pete Stauber for the Eighth Congressional District. Nystrom spoke at the rally beside DFL State Rep. Julie Sandstede, of Hibbing, and Mountain Iron Gary Skalko, who did not sign the letter endorsing another Trump term in office.

The Democratic group —men, women and children of all ages —held “Dump Trump” signs and waved “Biden 2020” American flags before the statue and along U.S. Highway 169. They rallied together nearly two weeks after Chisholm Mayor John Champa joined other mayors — Larry Cuffe of Virginia, Chuck Novak of Ely, Chris Swanson of Twin Harbors, Robert Vlaisavljevich of Eveleth and Andrea Zupancich of Babbitt — in signing the letter announcing that “today, we don’t recognize the Democratic Party.”

The mayors considered Trump’s 2016 presidential win as “something wonderful” and praised him for his claims that he “stood up to China, implemented tax cuts and fought for the working class.” “Now, four years later, the Iron Range is roaring back to life and for the first time in a very long time, locals are hopeful because of this president’s policies and willingness to fight for us,” the letter reads.

Novak, the mayor of Ely, told The Timberjay that he had been contacted by the Stauber campaign about signing onto the letter, but claimed that he did not see the final draft since his signature was done electronically. He did not agree with the message in its entirety. “I’m living on a Range that is not really thriving,” Novak told the newspaper based in northern Minnesota.

Members of the Democratic group said Wednesday they are calling for St. Louis County Attorney Mark Rubin to investigate whether mayors acted illegally when endorsing Trump.

Standing before the “Iron Range” statute, Nystrom referenced Trump’s calling Americans who died in war as “losers” and “suckers,” according to the recently published article in The Atlantic that has since been confirmed by numerous reporters from other outlets including FOX News. “That alone should vote him out of office,” Nystrom said.

She acknowledged that her comments came on the same day that Donald Trump, Jr. visited Duluth, the third presidential surrogate to recently make a stump in St. Louis County. “How flattering, because they know what we know: that Trump is not going to win the Eighth District again,” she said. “We’re going to get out and vote. We’re going to win this district and we’re going to show that Trump does not represent us in the Eighth Congressional District. He can send as many surrogates as he wants. He can send himself if he wants. But we are not having it anymore.”

The DFL congressional candidate noted Stauber’s vote against the Protecting the Right to Organize Act, or Pro-Act, which would amend labor laws to give workers in disputes and collective-bargaining agreements while penalizing companies that retaliate against those who organize. She said that Stauber was in favor of “right-to-work” laws.

She said her goal remains to “flip the seat back blue” in November after Stauber won the congressional district in 2018 to become the first Republican to do so in the historically blue region in 72 years.

“I want my country back,” said Sue Ann Succio, a 73-year-old Chisholm resident who worked more than three decades for Hibbing Taconite. “Stauber doesn’t know anything about ‘our way of life’ because he comes from Duluth and never worked in the mines.”

Nearby, James Whitlock, a 38-year-old resident of Chisholm and USW union member, described how he organized a separate rally in the same space in response to the Democratic event.

“We’re here to support Mayor Champa and every local mayor,” he said while standing among a dozen local men, women and children who waved “Trump 2020” flags on the grass-covered grounds near the highway. “We’re standing our ground here. They’re standing they’re ground over there. It’s been peaceful. We’re just trying to back our mayors.”

For Whitlock, he does not think the mayors sought out to speak on behalf of their respective communities. “People are looking at it in a wrong way,” he said. “They were talking as individuals.”

He continued, “As a steelworker, third generation, I stand by them 100 percent. Everyone is entitled to their own opinions.” Whitlock wore a sweatshirt that read: “If You Don’t Like Trump Then You Probably Won’t Like Me...And I’m OK With That.” Geno Cegon, a 60-year-old resident of the Iron Range, stood beside him and sported a “Trump: Make American Great Again” cap when saying that “Trump is the only one that cares about mining.” He added, “If it wasn’t for Trump, then mining would be closed up. The Democratic party hasn’t helped mining in years.”

There were signs of “a growing division on the Iron Range” in the “Trump 2020 [Explective] Your Feelings” and “[Explective] Trump” signs that popped up. Still, most individuals who showed up to either rally spoke of the “peacefulness” of the events shared in the same location.

Both Whitlock and Cegon said they voted for Trump in 2016 and Stauber in 2018 and planned to do so again in two months. “If you support mining, you’re going to get a lot of the votes here,” Whitlock said. “It’s Trump nation.” He considered his surroundings and noted that he had “never seen so much patriotism since I was little.”

He scanned the landscape, “We got different opinions. That’s your opinion. This is mine. Let’s go grab a beer. At the end of the day, everyone has their beliefs.”

Back near the statue, where Democratic organizers were providing people with information on how to vote, Zgonc thought over whether she believed Trump inspired patriotism across the Iron Range.

“There’s no patriotism,” she said. “Patriotism is coming together. But I don’t think cities, states and the country could be more divided right now. Trump is creating divisiveness and nothing will get accomplished when no one gets along.”

She mentioned a Pro-Trump rally scheduled for Friday at the Chisholm Water Tower. While Whitlock and friends described the event as a chance for Republicans to show their support for the president, Zgonc and Democrats said they did not plan to go. “On 9/11? Bad optics,” she said.