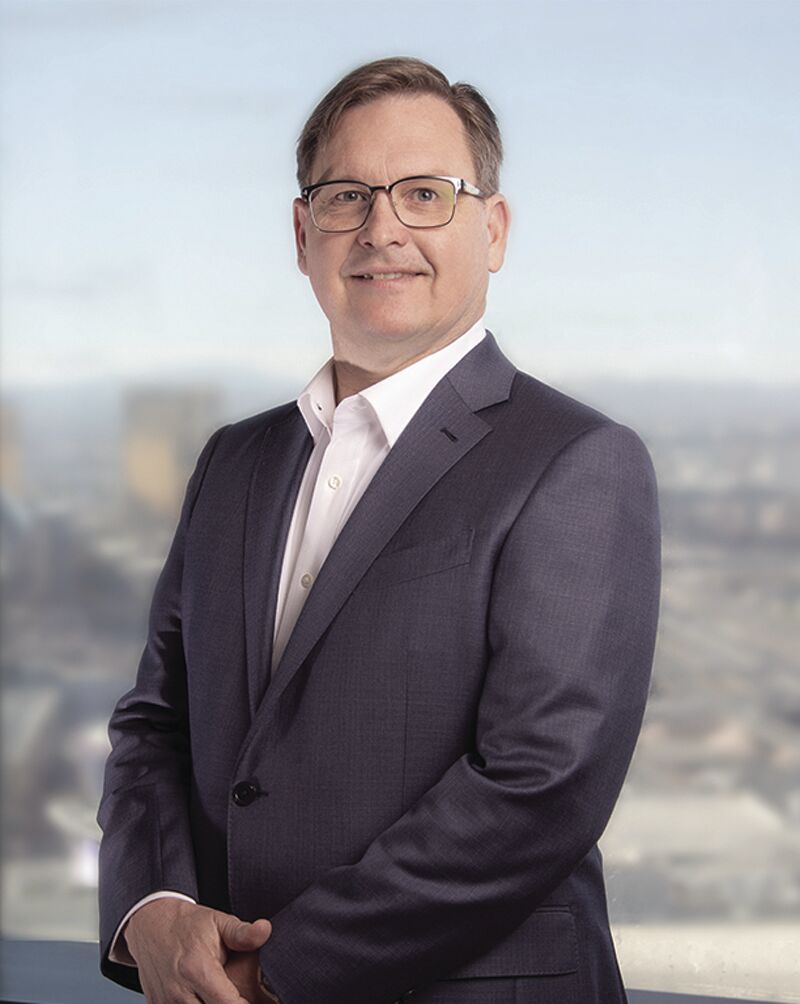 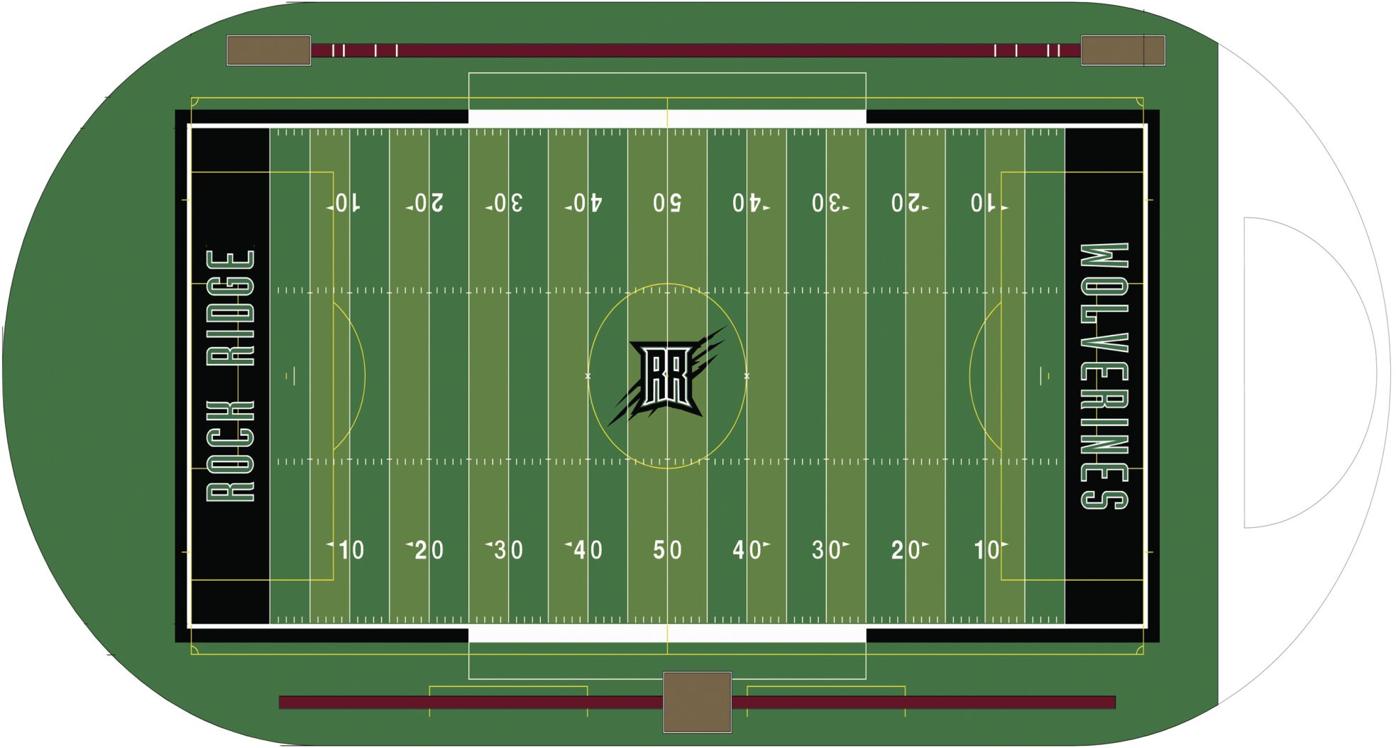 EVELETH — When Brian and Theresa Raduenz started up the Iron Ranger Foundation two years ago, they were also thinking about other ways to give back to the community.

They recently found that with a $250,000 donation to the Rock Ridge Rising campaign going on for the new merged school facilities now under construction. The donation includes the new football field being named Raduenz Field.

Willie Spelts, the Rock Ridge Human Resources Director/Fundraising Coordinator, recently reached out to Raduenz — the CEO of AEVEX Aerospace in Solana Beach, Calif. — to let him know what was going on with the campaign and the schools.

Raduenz, a 1984 Eveleth High School graduate, was more than willing to donate and pay forward what he received from the Range and the Eveleth schools.

“I wanted to help him with the fundraising,’’ he said. “I thought maybe that will kickstart the process so they can get it done the right way and get good numbers.’’

While he wanted to make a sizable donation to help the new schools, he was less concerned about having the field named Raduenz Field.

“I was happy to contribute and that just kind of came with the package.’’

That modesty is something that runs in the family, as well.

Raduenz remembered back to when his father (a dentist in Eveleth) had the letters installed on the front of his dental office. After seeing them finished, he thought they were too big.

“He didn’t want to look like he was advertising because it was a service he was providing and it was a profession that you don’t advertise for. He made them remake the letters smaller. That’s why I had to check with him to make sure that it (the donation and field naming) wasn’t a bad idea in that regard.’’

Spelts was very appreciative of the $250,000 donation.

“It was such an incredibly wonderful gift,’’ he said. “It kicked off this whole campaign.’’

“It gives us opportunities to do more’’ to enrich and enhance the project for the students and the communities.

Spelts also added “the gift was made possible by a partnership with the Golden Bear foundation, which acted as a conduit to receive the money. We appreciate their partnership in this beautiful gift.’’

Raduenz thought the football field naming would be most appropriate because he was the captain of the Eveleth football team in high school. He also played hockey and golf.

The Eveleth vs. Virginia rivalry is still fresh in his mind.

“I remember my two games against Virginia like they were yesterday. They crushed us in football, but in hockey we got them twice my senior year -- both games.’’

His success and abilities in hockey led to a chance to play for Air Force.

After retiring from the military, Raduenz would go on to be the CEO for AEVEX and he is still the CEO for Madison Dearborn Capital Partners out of Chicago.

The vision of AEVEX is to be the recognized leader in full-spectrum airborne intelligence solutions. AEVEX takes a long-term view of our customer relationships and establishes strong partnerships with both the U.S. Government and prime contractors. Their primary customer base is centered on supporting the U.S. Special Operations community and broader U.S. DoD customers and their foreign partners.

While running a major company, Brian and Theresa Raduenz are still focused on the community.

The Iron Ranger Foundation is one key example.

“We have a focus on kids who lost a parent,’’ he said. “The inspiration for that was my good friend Pat Forte. He battled cancer for many years and he really did everything he could to survive a lot longer than they told him that he would for his son. He knew how tough it would be for him to not know him and not have as much time as he wanted to. He battled mightily for a long, long time. That was kind of the original idea for how we were going to think about it.’’

“We’ve given a lot of scholarships and we reach out to different counselors and people who know kids that could use some help.’’

The foundation looks for kids that have a positive outlook, Raduenz said. “They’ve had a lot of adversity but somehow persevered, like my friend Pat. They’ve had lots of adversity but they’re positive and they have a plan and they know what they're doing and they want to get ahead and do good things in the world. Then we want to supercharge that for them. The idea is that people that have been through that type of adversity and still somehow come out the other end with a positive outlook and a plan and they’re thinking about how they’re going to do great things. If we can help those people, they’ll probably help thousands of other people.’’

The foundation has recently been working on moving the focus from college-based support to trades and different programs.

“They just need a head start and a little bit of help to get where they need to go,’’ he said of the trades idea, which came from Theresa. “It was her initial idea to start looking at the trades as an area. Everyone agreed that made a lot of sense.’’

“She is very supportive and she’s been my partner in all of our success with the business,’’ Raduenz added.

Growing up in Eveleth helped Raduenz with all of his successes, as well.

“I think the sports programs were very, very good for me. I learned a lot.’’

His father played a key role, as well, including when he wanted to start playing hockey.

“I came to my dad and said I wanted to play hockey. He said, “You can’t play hockey, you don’t know how to skate.’’

Raduenz begged and pleaded to join, but his dad had strong beliefs about getting involved in team sports.

“You don’t just go out for a team,’’ his dad told him. “You have to be serious and if you’re not serious about it you’re not going to play.’’

“So I spent every night at that rink working to prove to my dad that I could skate well enough to join the hockey program in Eveleth. I was pretty darn good by the time I started.’’

After missing mites and starting in squirts, “I was one of the better players because not only did I do it a lot but I loved it. He taught me you have to put in the effort in order to have any success with things and reinforced that all the time. That was a big deal for my early learning.’’

His teachers growing up were key to his development, too.

“My high school math teacher, Mr. Chuck Hiti, was phenomenal. He taught us well beyond the requirements for graduation in my senior year. When I attended the U.S. Air Force Academy, my entire first quarter was review and I aced the first test on my way to an easy “A.’’ Great educators can give you a real head start.’’

Raduenz is looking forward to attending a football game once the new field is completed and ready for use.

Although he loves the rivalries from his time in high school, he fully supports the schools merging into one.

“I think it was neat they came up with the merging of the colors to form green to kind of symbolize the coming together.’’

“I’m glad they’re going to have a really first rate facility and a beautiful new school. I think the educational system in that area is better than most. So I’m pleased to be a part of launching that effort.’’

Raduenz went on to say he “really got a big head start in life by growing up in an area where people were well educated and valued education and the sports programs as part of developing young people. I”m glad that’s something I could help with.’’

After traveling all over the world and doing business deals with foreign governments, he has realized “all the people that are coming together in the school have so much in common and so many great benefits of growing up in that area that just dwarf any differences. I think Rock Ridge High School carrying on the tradition of all three schools is an appropriate way to move forward and come together because they do have so much more in common.’’

Anyone interested in donating to the Rock Ridge Rising campaign can contact Spelts at 218-410-3097 or at willie.spelts@rrps.org.