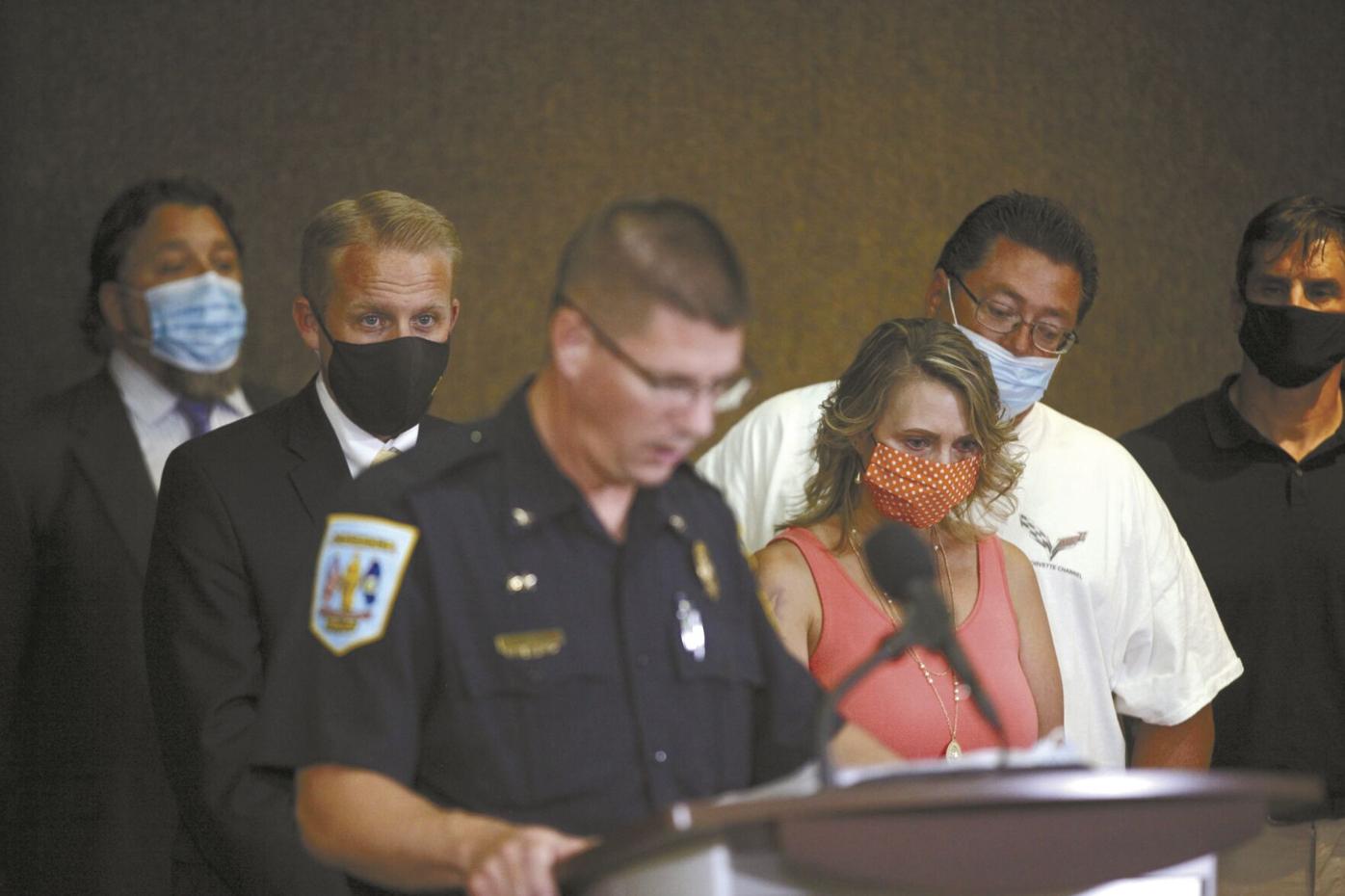 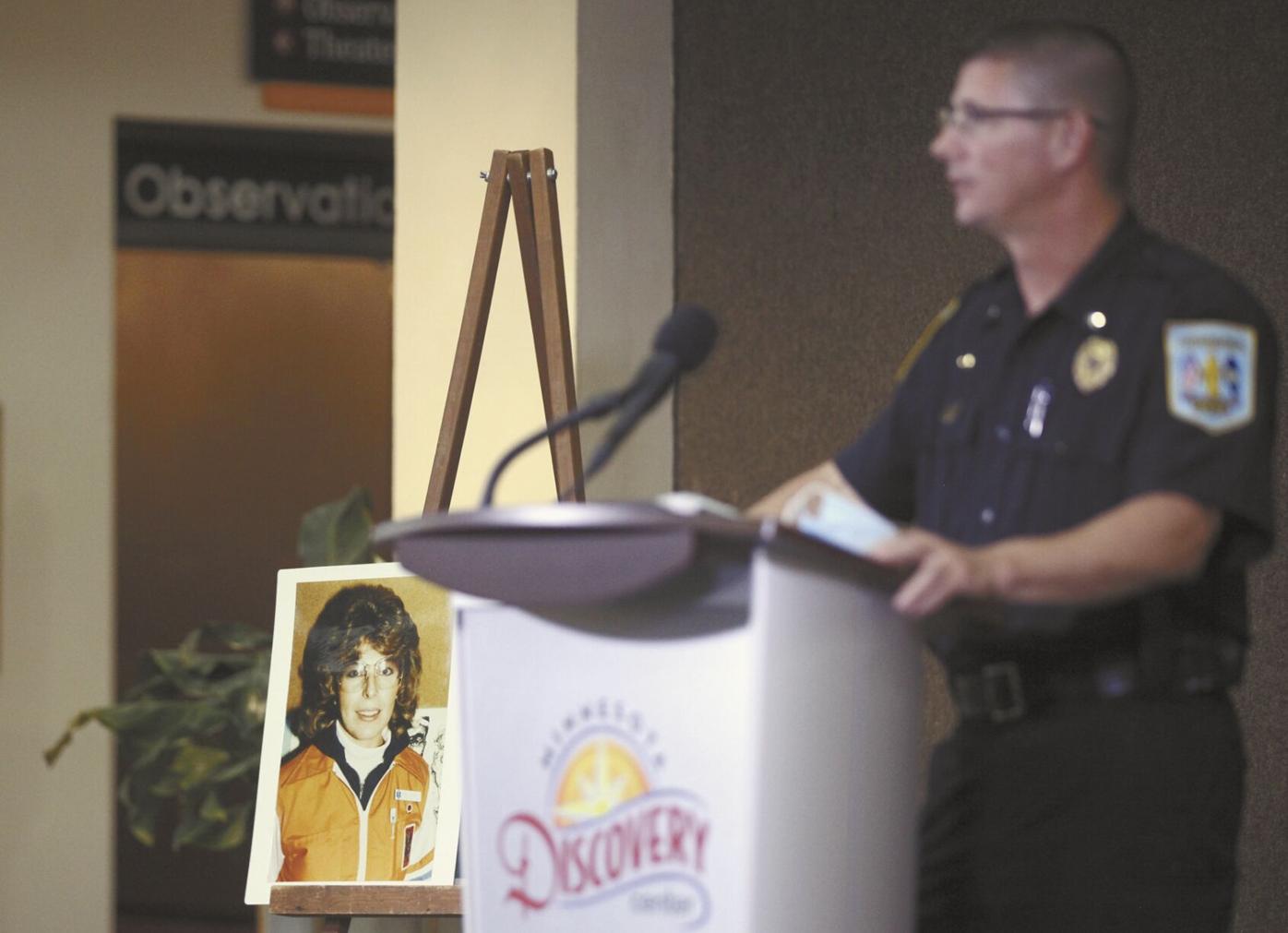 Chisholm Police Chief Vern Manner speaks about an arrest made in the 34-year-old murder of Nancy Daugherty (pictured) during a press conference Wednesday at the Minnesota Discovery Center in Chisholm.

Chisholm Police Chief Vern Manner speaks about an arrest made in the 34-year-old murder of Nancy Daugherty (pictured) during a press conference Wednesday at the Minnesota Discovery Center in Chisholm.

A Chisholm man exited the Lincoln Apartment Building when, the authorities said, he tossed a bag in the garbage dumpster on 5th Street Northwest.

It was the moment investigators had been waiting for in order to crack open a 34-year-old cold case.

Authorities, who had used a genealogy company to identify the man as a suspect in an unsolved murder from 1986, retrieved the garbage bag and sent it to a state lab for testing. Two days later, on Wednesday, the lab reported that the DNA found in the bag matched a previously developed suspect profile, court records read. Law enforcement then moved to collect a direct DNA sample from the man and soon found, they said, the evidence fit into the narrative that he committed the long unsolved murder.

The man, Michael Allan Carbo, Jr., 52, was arrested Wednesday afternoon by the Chisholm Police Department and the Minnesota Bureau of Criminal Apprehension and charged on Thursday morning with intentional murder of the second-degree in the killing of Nancy Jane Daugherty, a 38-year-old woman who was raped, beaten and strangled to death in her Chisholm home more than three decades ago.

At the time of the murder, authorities said Carbo “was living less than a mile from the crime scene in 1986 and attended school with Daugherty’s children,” according to a complaint filed Thursday morning in the St. Louis County Sixth District Court.

Presiding over the arraignment on Zoom, District Judge Andrew Peterson set bail at $1 million and ordered a bail study. Carbo requested a public defender via the social conferencing tool from a holding facility in Virginia. He is expected to be transported down to the County Jail in Duluth.

St. Louis County assistant attorneys Karl Sundquist and Christopher Florey are prosecuting the case. “We give our condolences to Nancy Daugherty’s family,” Sundquist said that afternoon. What’s amazing to me is the unwavering dedication of the Chisholm Police Department and BCA and other law enforcement agencies that brought the case to a point where we could file charges.”

Carbo is set to make his initial appearance in court Aug. 6.

Local and state authorities used genealogy to identify the suspect and then worked surreptitiously to retrieve a DNA sample and ultimately direct evidence from Carbo, an employee at Range Center who lives in Chisholm.

The tactic of using an online genealogy database to crack cold cases became popular after authorities made an arrest in the case of Joseph James DeAngelo AKA the Golden State Killer in 2018, who pleaded guilty in June to a number of murders dating back to 1975. He acknowledged more than 50 rapes that he was not charged with due to California’s statute of limitations. Genealogical testing has led to arrests in cases in various other states, including North Carolina and Pennsylvania, among others.

At a news conference late Wednesday evening, Chisholm Police Chief Vern Manner announced that law enforcement arrested Carbo for the sexual assault and murder of Daugherty, who was a mother.

“This is a day Nancy Daugherty’s family and all of Chisholm have waited for for over 34 years,” Manner said at a conference at the Minnesota Discovery Center in Chisholm. “We are truly gratified to provide some answers to Nancy’s family about what happened and after all these years to take a killer off our streets.”

BCA Superintendent Drew Evans said in the conference that “this is the first case in Minnesota that has been solved, or where an arrest has been made using this technology.”

In July 1986, Daugherty was found murdered in her home in Chisholm, a criminal complaint read. Daugherty, a part-time bartender, nursing home aide and volunteer emergency medical technician at the local ambulance service, was raped and manually strangled. There was evidence of a struggle inside and outside of the home before her death.

Daugherty’s boyfriend told police they had been out the night before her death and he dropped her off at home at 12:30 a.m. He could not get in touch with her the following day and reached out to law enforcement.

Law enforcement entered Daugherty’s home and found her “nude in her bed with a pillow covering her face,” the complaint reads. Two girls in the neighborhood told law enforcement that they heard “a call for help, screams and arguing” taking place at the home at about 3:30 a.m. The authorities collected DNA samples from the crime scene, including from Daugherty’s body.

The case remained unsolved for more than a quarter of a century.

Over the years, authorities had conducted more than 100 DNA swabs from potential suspects to be compared to the evidence found at the scene.

A break came earlier this year when the Chisholm Police Department approached the BCA with the idea to provide a sample of the DNA evidence to Parabon NanoLabs, Inc., a company in the state of Virginia that analyzes public genealogy databases including enforcement programs to generate leads in cases, the complaint reads. The BCA lab coordinated with the company to provide a DNA sample gathered from “seminal evidence” from the sexual assault kit from Daugherty.

At the press conference, Manner said he had “decided to pursue genetic genealogy as a way to possibly generate new leads in the case.”

In July, Parabon NanoLabs contacted law enforcement “to advise that as a result of their analysis a lineage belonging to the suspect had been identified,” the complaint reads. The company identified Carbo as being associated with the genetic lineage.