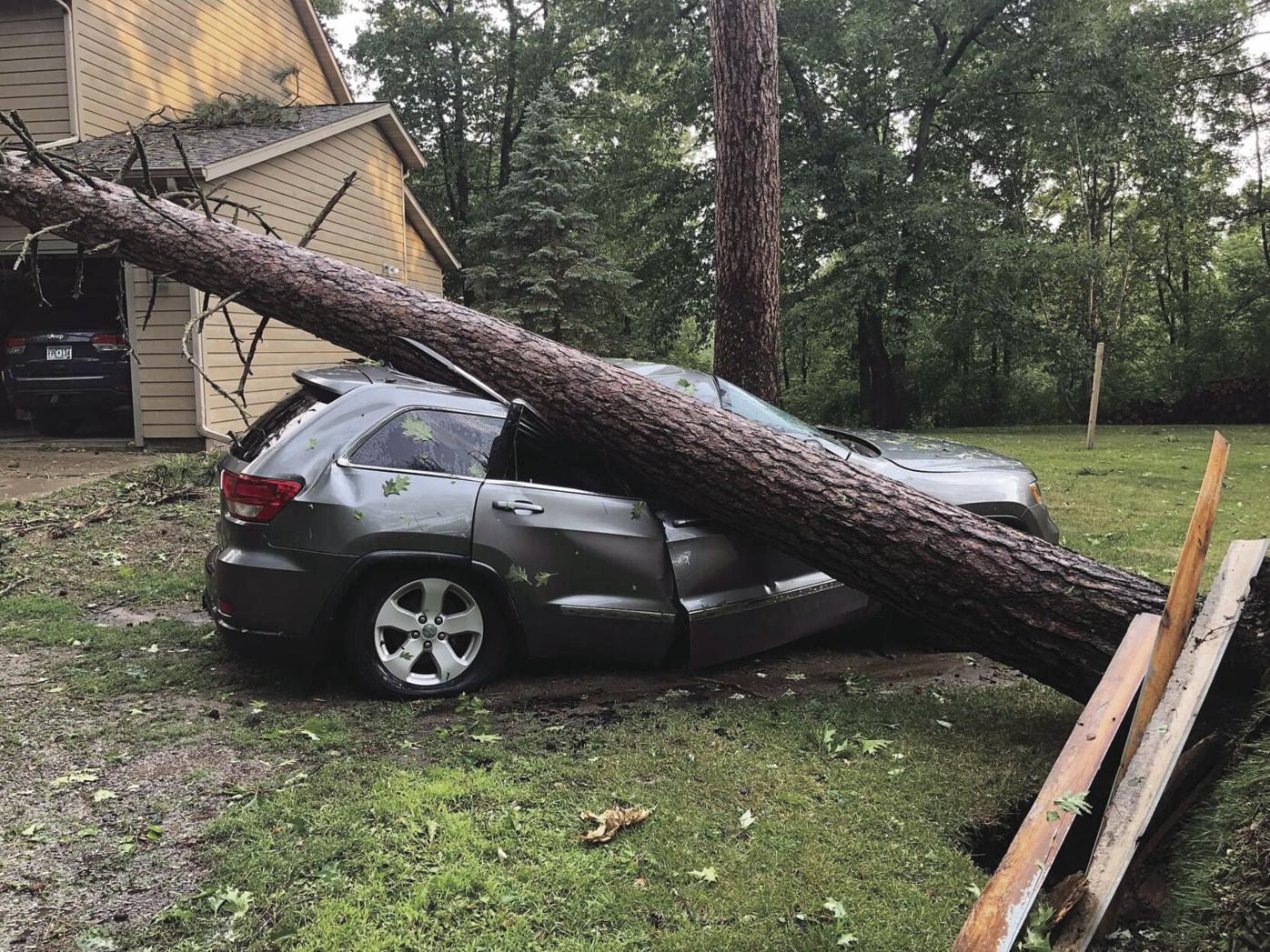 A downed tree from Monday night’s storm severely damaged a vehicle in the Grand Rapids area. 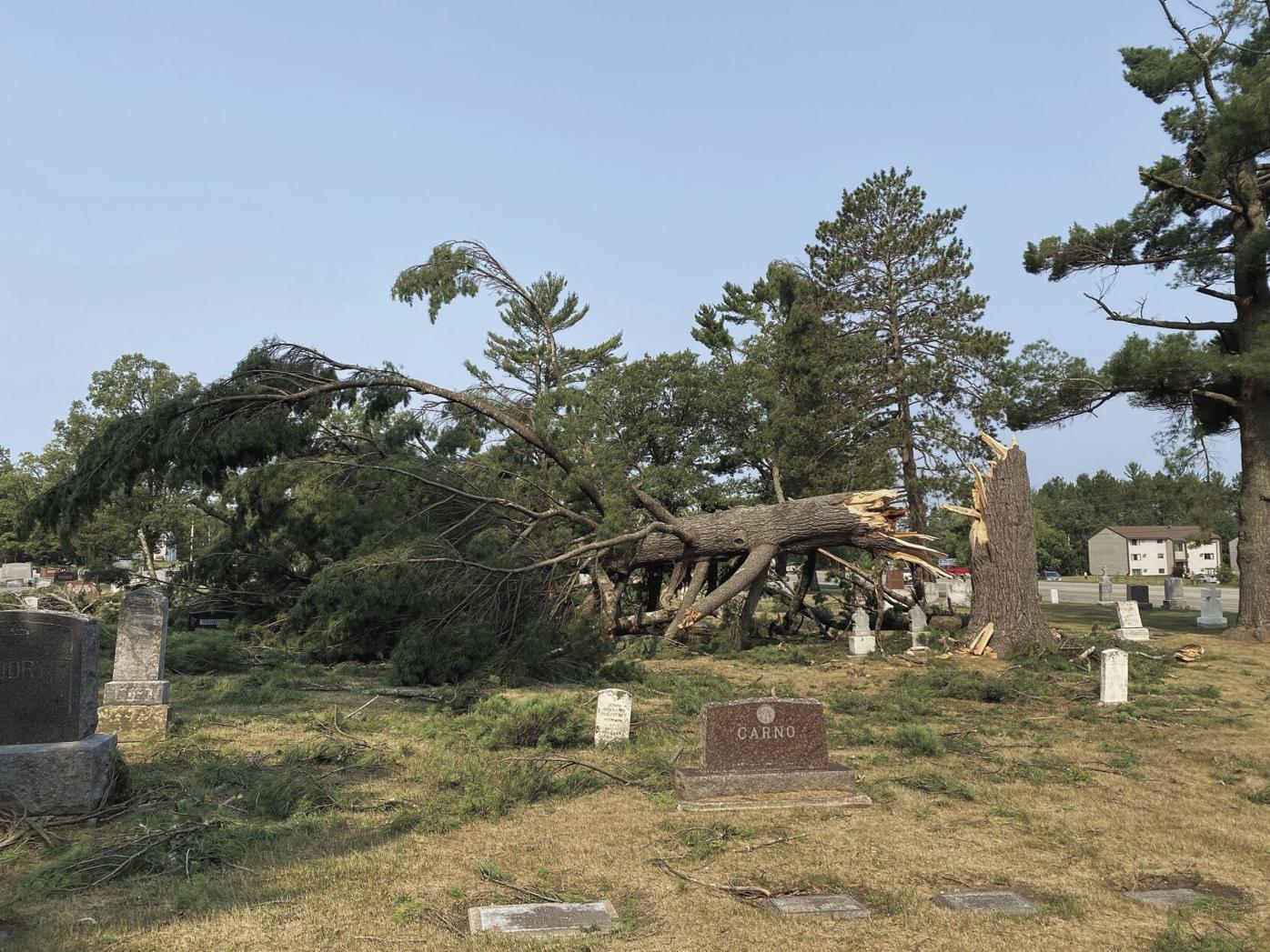 A large tree was snapped right off as a storm moved through the Grand Rapids area Monday night.

A downed tree from Monday night’s storm severely damaged a vehicle in the Grand Rapids area.

A large tree was snapped right off as a storm moved through the Grand Rapids area Monday night.

A day after a storm ripped through the western Iron Range, Grand Rapids Mayor Dale Christy saw good coming from a bad situation.

“The cool part here is with all the division there is in society, you see neighbor helping neighbor,” Christy said. “It's a good thing.”

For the second time in three days, thunderstorms on Monday evening ripped across northeastern Minnesota.

Trees fell on power lines and on homes throughout the city, Kennedy said.

“I've got a house behind me with a tree on it,” Kennedy said from her office. “There are houses that are crushed.”

Christy said a tree fell in his yard, narrowly missing his home, but taking down rain gutters.

“I can't get my door open,” Christy said. “But we were lucky. There's trees down everywhere on houses. On the north end of town, pretty much all the businesses are shut down. On the south end of town, some are open.”

Some citizens are comparing damage to a storm that ravaged the city years ago, he said.

“Utilities are down in parts of the city and in parts of the county,” Christy said. '”A huge white pine is down in the cemetery and headstones are knocked down. I've seen debate on social media comparing it to the July 4 storm we had a decade ago.”

“Trees are down everywhere,” Wegwerth said. “They're on cars and they're on houses. It split us right down the middle.”

“The residents have been good,” Wegwerth said. “They're out there cleaning up and putting debris on the curb. Everyone turns into a lumberjack.”

“One call and they were here,” she said.

As of Tuesday afternoon, about 3,700 customers in Grand Rapids remained without power, Kennedy said.

“It's the worst I've ever seen it since I've been here,” Kennedy said.

“They said we had between 70 and 100 mile-per-hour straight line winds,” Howe said. “We probably broke 15 poles and the count is going up.”

A wind gust of 54 miles per hour was confirmed at the Grand Rapids Airport/Itasca County, according to the National Weather Service in Duluth.

But winds could have reached higher speeds in other spots, the weather service said.

Personnel were working 16-hour shifts to make repairs, he said.

“They live for this,” Howe said. “They're highly motivated. They want to help people by restoring their power.”

Crews will be working into Wednesday to fully restore power, Howe said.

“We hope to have all the power back on by tomorrow and then get ready for the next one,” Howe said.

It was the second strong storm to hit the northland in a matter of days.

However, those outages were primarily in the Ely area, Zaun said.

For some, the Grand Rapids and Ely area storms were huge.

But neither was the largest in recent history.

As of Tuesday afternoon, about 940 Lake Country Power members remained without power.

Utilities urged the public to stay away from debris as downed power lines could be tangled in brush and limbs.

Any downed power lines should be considered “live,” and left for line workers to handle, Lake Country Power said in a news release. People should not attempt to move downed lines or trees and brush near downed wires.

Members can call the cooperative at 1-800-421-9959 for more information or visit the Outage Center at www.lakecountrypower.coop or http://mi.lcp.coop:82 for real time outage information.