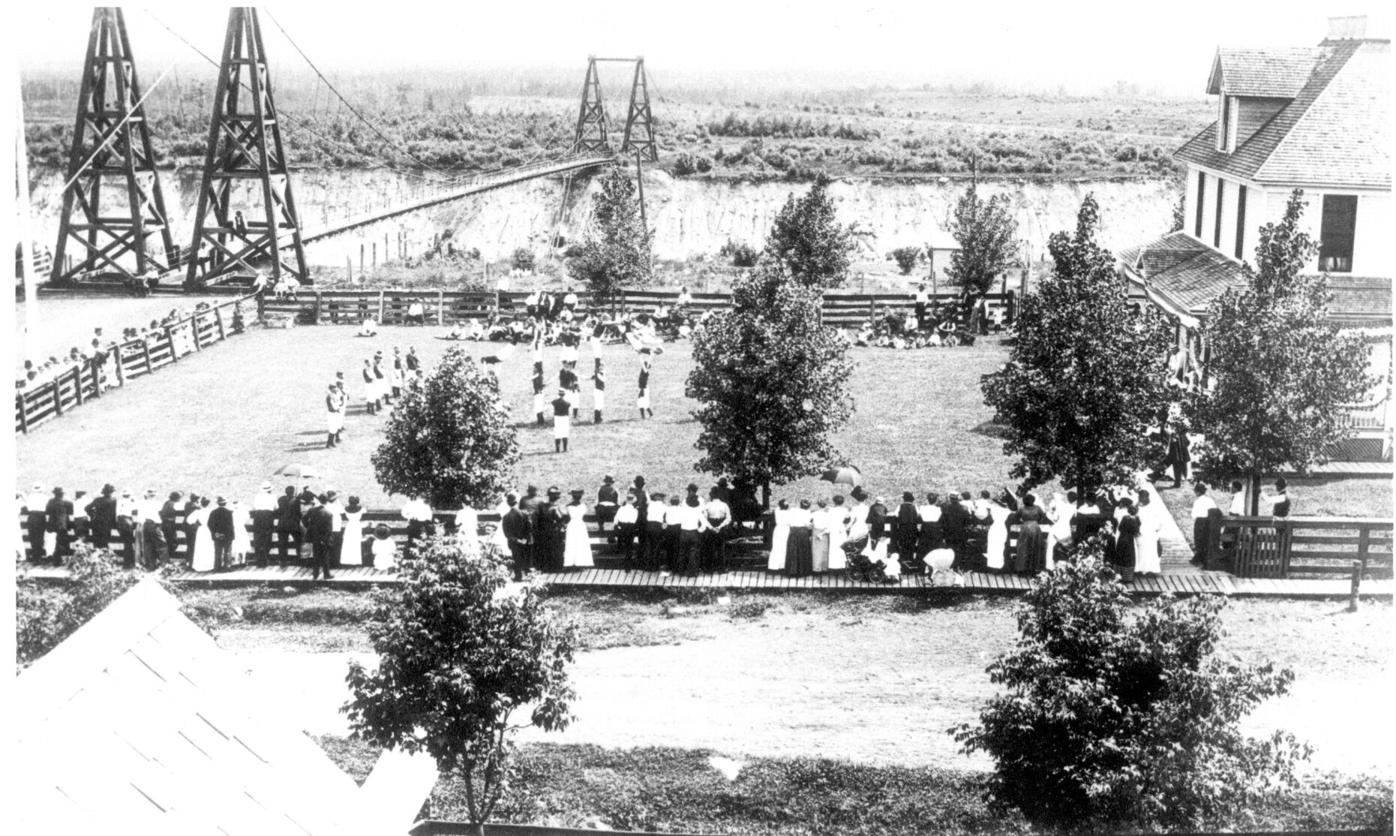 The Finnish Drill Team did gymnastics in the yard of the mining office as part of the Fourth of July celebration at Stevenson Location in 1908. The mining office building is seen on the right of the photo. Many appreciative viewers are enjoying the performance. In the background is the famous suspension or "swing" bridge which gave Stevenson residents a means of getting over the pit. At approximately 500 feet, it was the largest swing bridge in the United States. On extremely windy days, one can imagine that walking across it wasn't always pleasant! 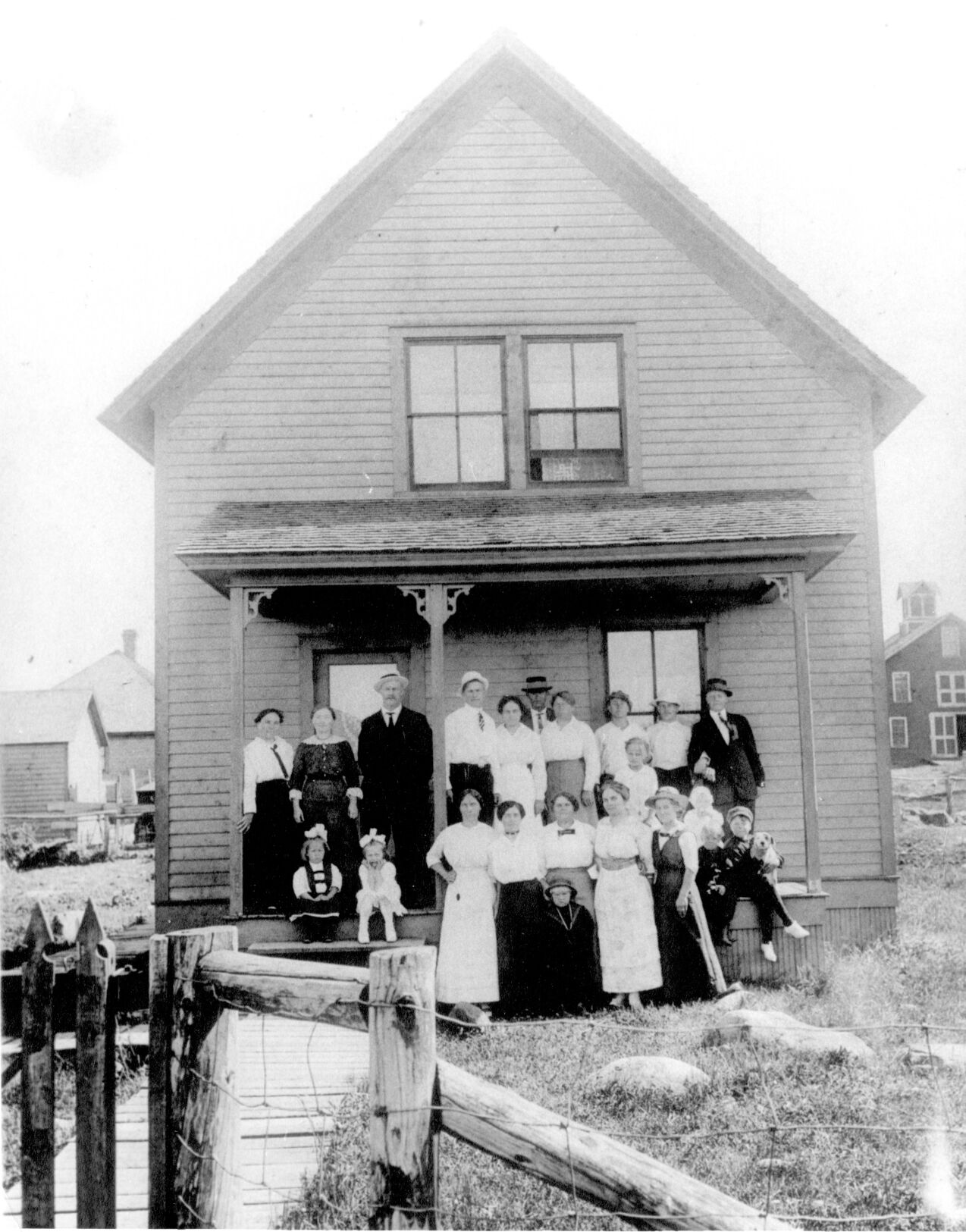 The first home of Anton and Esther Rantala (Helen Rantala Kosiak's parents) in Stevenson Location is the setting for this gathering of well-dressed relatives and friends. Anton is on the porch in a white shirt and white hat. Esther is in a white dress next to him. This was a "typical Location house," narrow, with two windows upstairs and a small covered porch. Most yards in Locations were fenced to keep out wandering cows.

The Finnish Drill Team did gymnastics in the yard of the mining office as part of the Fourth of July celebration at Stevenson Location in 1908. The mining office building is seen on the right of the photo. Many appreciative viewers are enjoying the performance. In the background is the famous suspension or "swing" bridge which gave Stevenson residents a means of getting over the pit. At approximately 500 feet, it was the largest swing bridge in the United States. On extremely windy days, one can imagine that walking across it wasn't always pleasant!

The first home of Anton and Esther Rantala (Helen Rantala Kosiak's parents) in Stevenson Location is the setting for this gathering of well-dressed relatives and friends. Anton is on the porch in a white shirt and white hat. Esther is in a white dress next to him. This was a "typical Location house," narrow, with two windows upstairs and a small covered porch. Most yards in Locations were fenced to keep out wandering cows.

Last Sunday, here on the Years of Yore page, was a photo from 1904 showing the primitive road first cut through the virgin forest leading from Hibbing’s original town site to the Stevenson Mine. This mine was located several miles west of Hibbing and north of Keewatin, very close to the St. Louis County and Itasca County line. It was among the first mines in that area and by 1906 it was shipping ore.

Because of the high quality ore found in the early Itasca County mines, the Great Northern Railroad built a nine-mile rail line spur to connect with the main line in Hibbing’s mining district. This rail spur also helped the Stevenson mine to become a major player in supplying ore on the Mesabi Iron Range.

The Stevenson Mine was a good producer and employed many miners. The Stevenson Mining Location was a large one which became a beloved home to many people. The ownership of the mine changed hands several times during the 20th Century as mining companies sold, consolidated, and then sold again.

Today, the area that was the Stevenson mine and Location is part of Hibbing Taconite. In the late 2000s, further mining into those acres began. But before that could occur, the mining company needed to pay for an archeological study to be completed. We must acknowledge the Anishinaabeg people who inhabited this land first. These people include the Cree, Dakota, and Ojibwe. The study uncovered evidence of the white people who lived in the Location, but little remained from the earlier residents. That study is now filed at the Minnesota Discovery Center Research Library in Chisholm.

Thanks to Art Lind and Gary Liubakka for their help with information about Stevenson.

Stevenson’s surface land is now in stockpiles and its minerals move through the crusher at HibTac, but the memories of life there remains in photos and essays, such as the following essay by Helen Rantala Kosiak. Helen was born and raised in Stevenson Location and graduated from Hibbing High School in 1942. She taught elementary school and met the love of her life, Dr. Michael Kosiak, DDS, at a dance in Chisholm on VJ day. They were married for more than 64 years. She was fluent in Finnish and never lost her love for the Iron Range, traveling to Stevenson, Hibbing, and Chisholm on a regular basis. She died in 2017. This essay was published in the Hibbing Daily Tribune’s Centennial Edition on July 22, 1993, celebrating Hibbing’s 100th Birthday.

Stevenson Location, which was located seven miles west of South Hibbing, was founded in 1900. It was a lovely place. There were grocery stores, four saloons, one shoemaker shop, one tobacco plus candy store, the post office, barber shop, doctor’s office, Finnish Sauna and Finnish Hall. There was also a beautiful grade school with grades kindergarten through sixth.

For the miners, there were rooming houses. Some miners stayed in private homes. There were many mine office buildings, homes for the mining executives, and a mining company barn. The longest swinging bridge in the United States was built in Stevenson in 1907. The miners used the bridge to walk from the Location over the pit to their jobs on the other side. It was a historic sight.

Three hundred buildings once stood in Stevenson. There were about 500 Finnish, Italian, and Slovenian miners who worked in clothes bought from the General Store owned by Ben Stone, who was Bob Dylan’s maternal grandfather. He opened the store in Stevenson in1913. He raised his family there. When work at Stevenson dried up, he moved his family to Hibbing and re-established his store at First Avenue and Howard Street. (Where the China Buffet restaurant is located today.)

The first child born in Stevenson was Julia Koski Wilippo, born in the year 1900. Her parents, the Nestor Koskis, had come to Stevenson in the spring of 1900 when mining operation were just getting started. Her parents built a big boarding house and sometimes there were two or even three shifts of miners occupying the beds. There were sometimes 50 to 60 miners living with them. They opened their house to anyone, especially those who had just come from the “Old Country.”

Church services were held in other homes or at the school. There were visiting pastors and priests.

In the early days of mining locations, peddlers would come house to house with big suitcases selling all sorts of goods. There would be calico for 5 or 10 cents a yard, and pins, needles, socks, and even some pretty bowls or plates. Eventually more stores were built, but people often liked the peddlers who came right to the door, so there were still peddlers for many years working in the area.

Eventually, when all the stores had gone out of business, the people who remained in Stevenson relied on delivery trucks from Makinen Grocery and Michelich Market in Keewatin. Some people shopped in Hibbing for food and clothing. There were horse-drawn wagons and later on gas-powered trucks that would deliver ice for ice boxes (forerunner to refrigerators and freezers), grapes for making wine, and other fruits and vegetables.

One of the big events held in Stevenson was the annual Fourth of July celebration with bands playing, parades, and ballgames. Stevenson in 1912 had one of the greatest independent baseball teams in the state. Their games were played on the diamond behind the schoolhouse. Bleachers were even built for the crowds that came to the games.

When people first came from Europe, especially the Finnish settlers, they had many large gymnastic teams. These teams would perform at many special events. People loved to see the teams perform their amazing acrobatic moves.

Entertainment often was to be found at the Finnish Hall and groups other than the Finnish people could rent the hall. Silent movies were shown there. Also popular were plays, sometimes put on by the “Americanization Classes” who practiced English by performing these plays. There were wedding dances, farewell parties, and Christmas celebrations, too. The school, too, held beautiful parties, teas, programs, and dances.

The Stevenson Mine was one of the first pioneer properties in the Hibbing area to reach the million ton output classification. But the day came when the Location had to close. Some structures were moved and some torn down. The mining offices continued to be used by the Stevenson and St. Paul Mine front office staffs. Slowly, everything was closed down. There were shovels digging where the houses once stood, but now all is quiet. All that remains of Stevenson are signs reading “No Trespassing” and “Road Closed”.

It was a very special place to live. There are still early settlers living in the Hibbing area. They are left with only memories.

Mines That Have Closed

Writing about the Stevenson Mine got me thinking about other iron ore mines that once existed on all three of Minnesota’s Iron Ranges (Mesaba, Cuyana, and Vermilion) providing work, but then closed. I found the following list which seems to have been published in the 1970s by the University of Minnesota School of Mines. Some mines are not listed here apparently because they were absorbed into a still-producing mine. However, there are also some of those “absorbed” mines which are listed.

Mines which were still producing when this list was prepared are also not listed here.

And “wildcat” mines were sometimes not even named because they were open very briefly – and often illegally.

So although this is not a totally accurate list of every mine that once existed in Northern Minnesota, it gives a fair idea of the scope of names and the number of mines that contributed to the world’s steel. The list includes both underground and open pit mines.