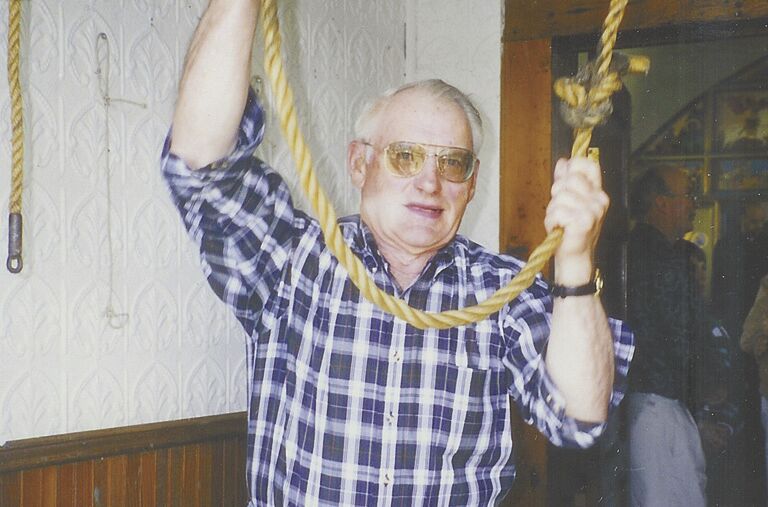 Andrew Lucachick rings the church bell. He died in 2012 at age 89. His obituary read that he "faithfully cared for the St. Peter and St. Paul Russian Orthodox Church in Bramble all of his life." The church is on the Lucachick property. 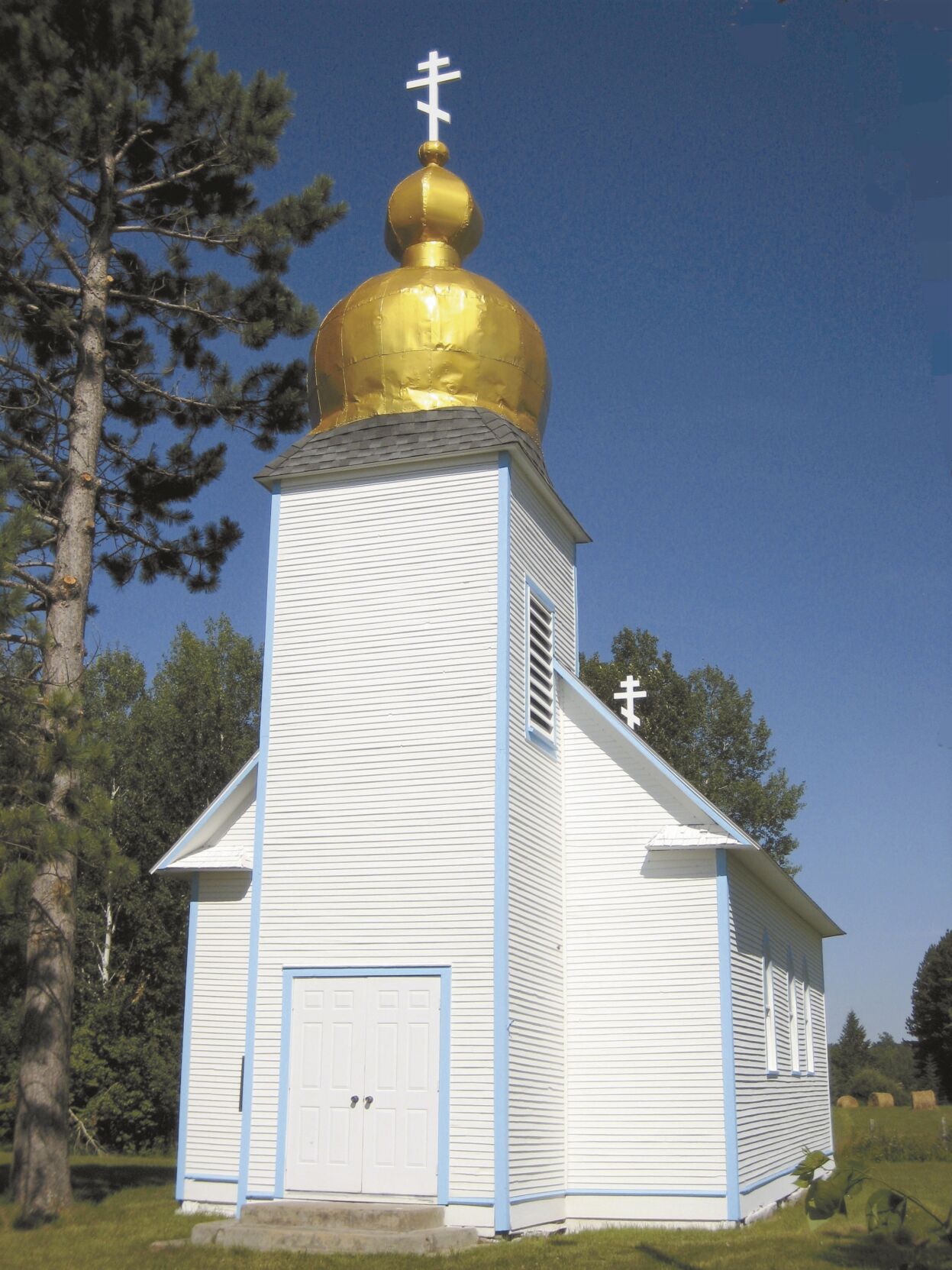 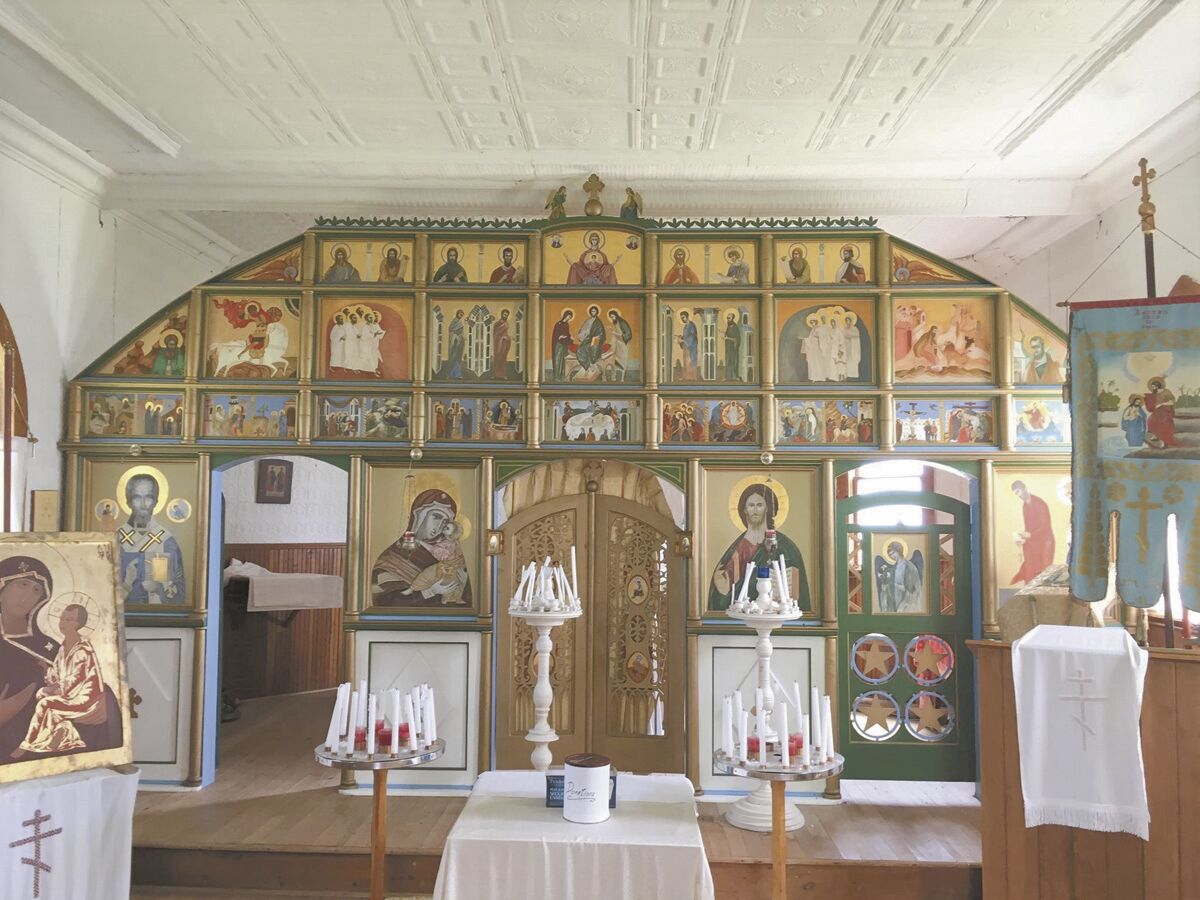 The interior of the church features iconostasis , a screen bearing icons, or elaborate paintings. They depict Christ, his mother Mary, scenes from the Bible or the lives of the saints and are traditionally seen in Eastern Orthodox churches.

Andrew Lucachick rings the church bell. He died in 2012 at age 89. His obituary read that he "faithfully cared for the St. Peter and St. Paul Russian Orthodox Church in Bramble all of his life." The church is on the Lucachick property.

The interior of the church features iconostasis , a screen bearing icons, or elaborate paintings. They depict Christ, his mother Mary, scenes from the Bible or the lives of the saints and are traditionally seen in Eastern Orthodox churches.

BRAMBLE — In the community of Bramble, close to the Koochiching, Itasca and St. Louis county lines, stands a church that is listed in the National Register of Historic Places.

It's one of the earliest Orthodox churches built in northern Minnesota, St. Peter & St. Paul Russian Orthodox Church, thanks to the European immigrants who settled this farming country.

Next Saturday, Sept. 18, people will gather at the church with its shiny gold-painted onion dome. The St. Archangel Michael Orthodox Church from Hibbing will conduct the annual church service and picnic beginning at 10 a.m. Attendees are asked to bring a dish to share.

The onion-domed church in Bramble was built 1915 through 1918 by immigrant homesteaders, said Karen Lucachick of Cohasset. The land had been donated by William Lucachick, grandfather to Karen's husband Todd Lucachick.

The first Mass was celebrated by a Russian Orthodox priest from Chisholm, and the interior contains iconostasis, a screen with holy pictures, built and installed by a local carpenter and farmer Alex Trebenetz in 1926, said Greg Nelson of Forest Lake, great-grandson of William Lucachick.

"The Orthodox service is known as the divine liturgy and is celebrated according to church doctrine that specifies the order and length. If a lengthy sermon is added, sometimes the services get longer than one hour," Nelson said.

In keeping with Russian Orthodox tradition, there are no pews. Most of the congregation would stand throughout the service, except for the elderly and infirm, for whom there were benches provided.

The bell for the Bramble church came via horse-drawn wagon from Chisholm, since one of the Orthodox churches there had ordered a new bell that came too big for the steeple, Nelson said. "So the Bramble church got their new bell for around $700 but had to bring it all the way by horse-drawn wagon to Bramble. The local church members worked hard to get their church established, but by late 1929 with the Depression and all, there was no work for anyone so the community suffered from lots of folks moving away, resulting in the church closing down for the most part."

Karen Lucachick said, "The church fell into disuse in the 1930s, but Rev. Paul Berg, an Episcopal minister in Grand Rapids, discovered the church and organized an effort to restore it. The building was rededicated in 1968 and was added to the National Register of Historic Places in 1983 as a result of Father Berg​’s restoration efforts. Father Berg saved the church. Father Berg is buried in the church cemetery."

A fundraising event was held and the proceeds were used to provide necessary repairs to the church which included new roofing, exterior and interior painting.

"The onion dome was a mustard yellow, but after Todd Lucachick researched auto body paints, clear coats, rented scaffolding and a paint sprayer, it is now a shiny gold," Karen Lukachick said.

Greg Nelson said, "When my great-grandparents first came to America, Great-Grandpa escaped out of Europe to avoid the army draft. He was afraid of being sent back to Europe to fight in World War I, so he never filed for citizenship until after the war ended. Great grandma Julia came to America as an indentured servant, working as a house maid and governess to a Jewish family in New York City. After meeting and getting married, they then came to Chisholm for iron ore mine work, they were anxious to have a farm of their own and chose southeastern Koochiching County as that is where the next open area was set for homesteaders.

"Great Grandpa Wasyl (William) Lucachick went north with other settlers in 1905 to get started on his homestead and was ready for the filing of his land claim in Duluth. He would be known now as a 'sooner' as he jumped ahead in the process of filing his homestead claim. Then in the summer of 1906, with two small children and his wife Julia Kotulich Lucachick, along with a wagon full of food, chickens, seed, and belongings pulled by two horses and a cow, they made the long journey from Chisholm (2 days of travel) to Rauch/Summerville Township to begin their homestead on the wilderness property.

"Great grandma Julia would leave home (with the older kids to watch the younger ones), walking barefoot and leading a horse or cow to carry the shopping stuff back home, heading to the nearest store that was 10-12 miles away. Imagine the effort taken to bring back a 100-pound sack of flour for baking, along with other food supplies and maybe some yard goods to sew clothes for the family."