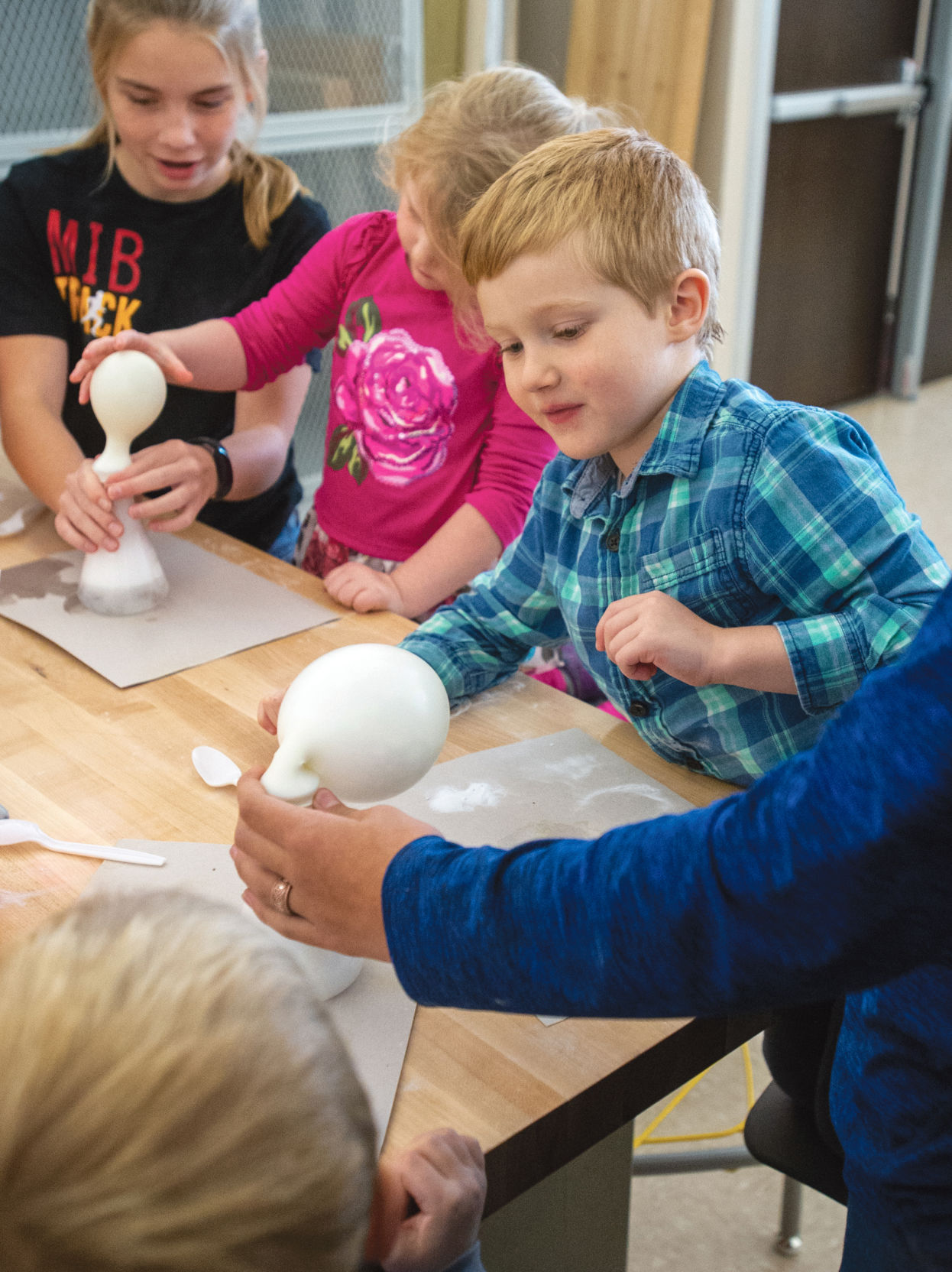 Merritt School kindergarten students watch as the baking soda and vinager chemical reaction they created blows up a balloon Thursday. 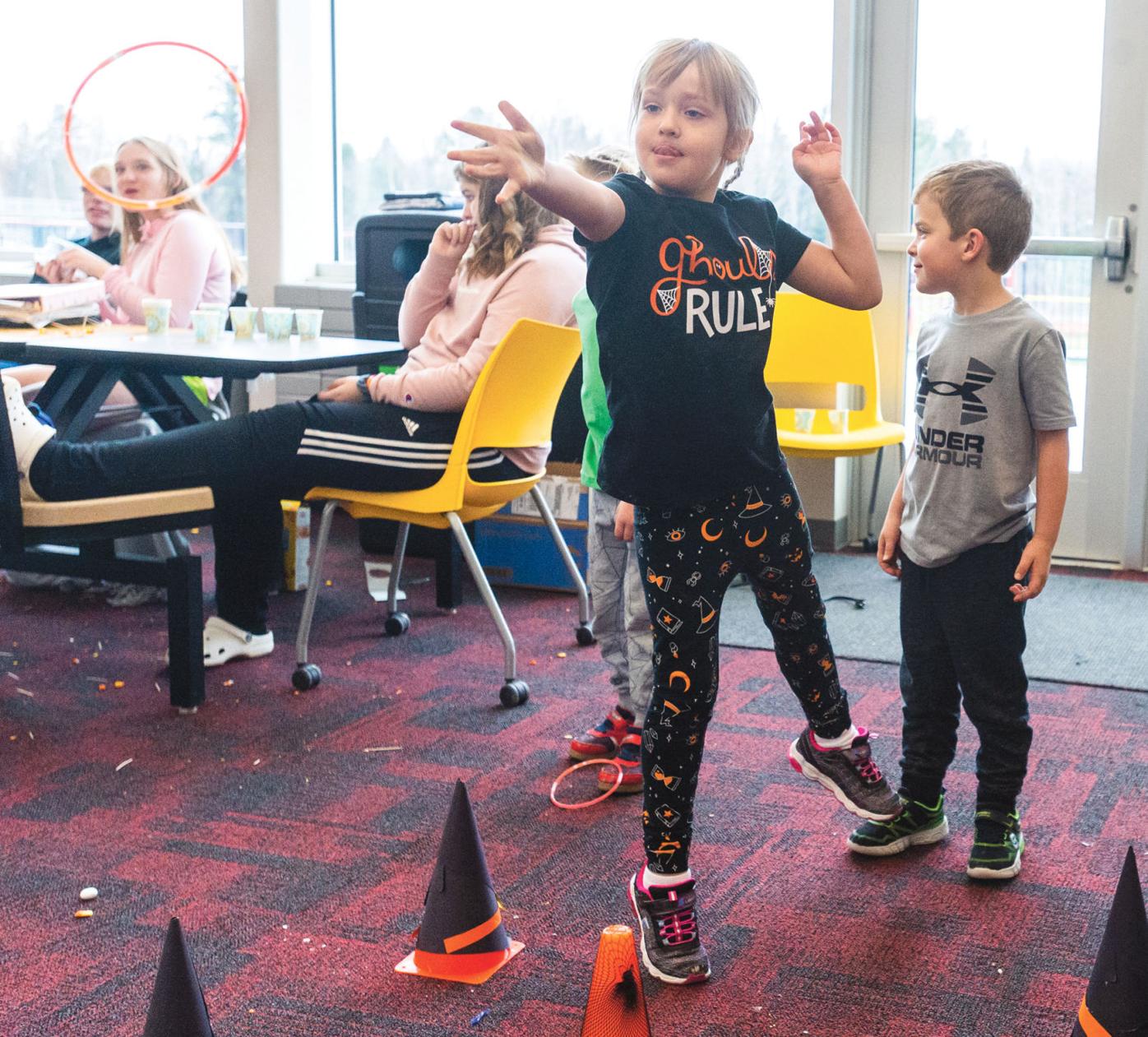 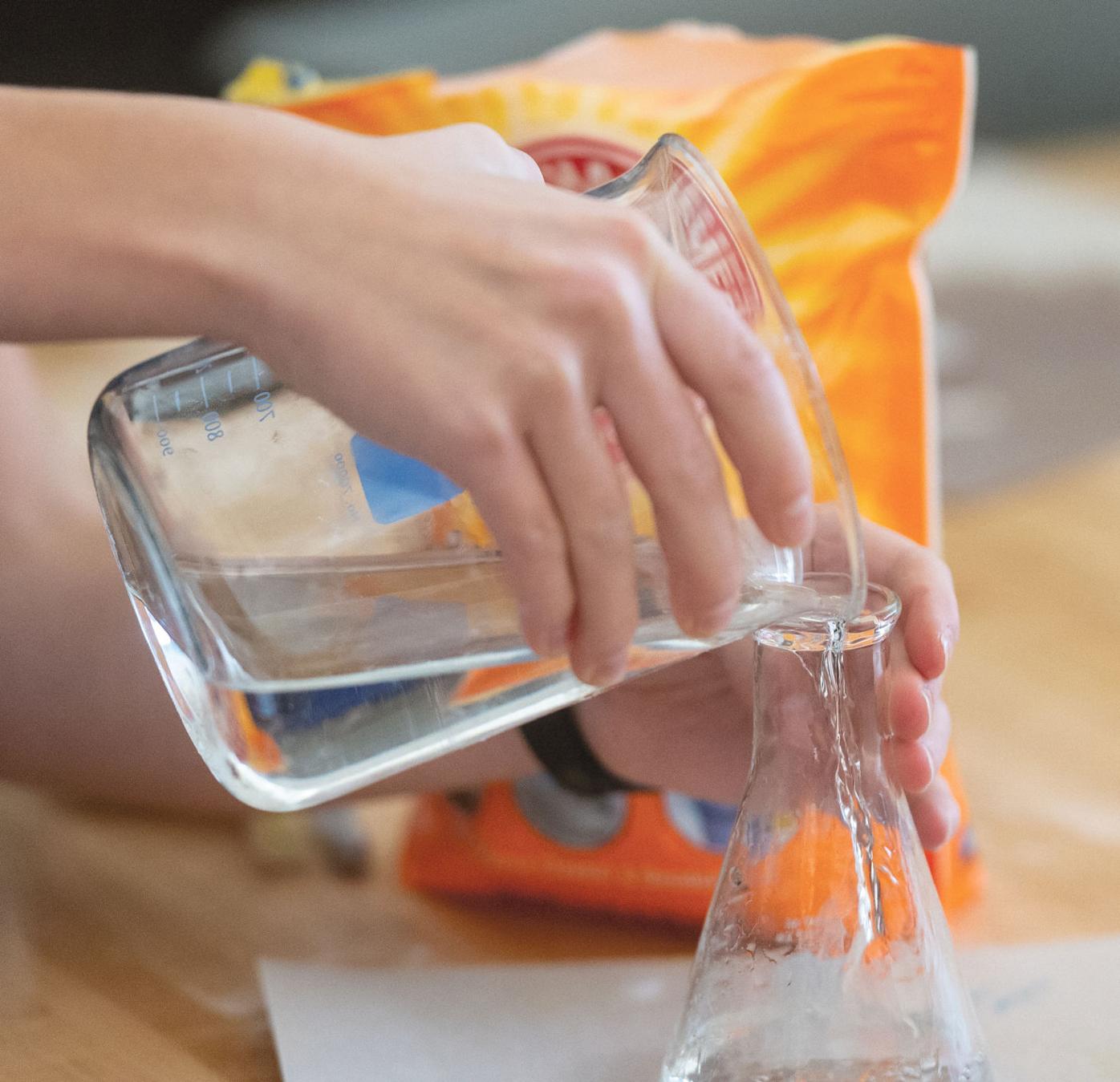 Merritt School students learn about science in a fun way Thursday during the school's Halloween STEM Fair in Mountain Iron. 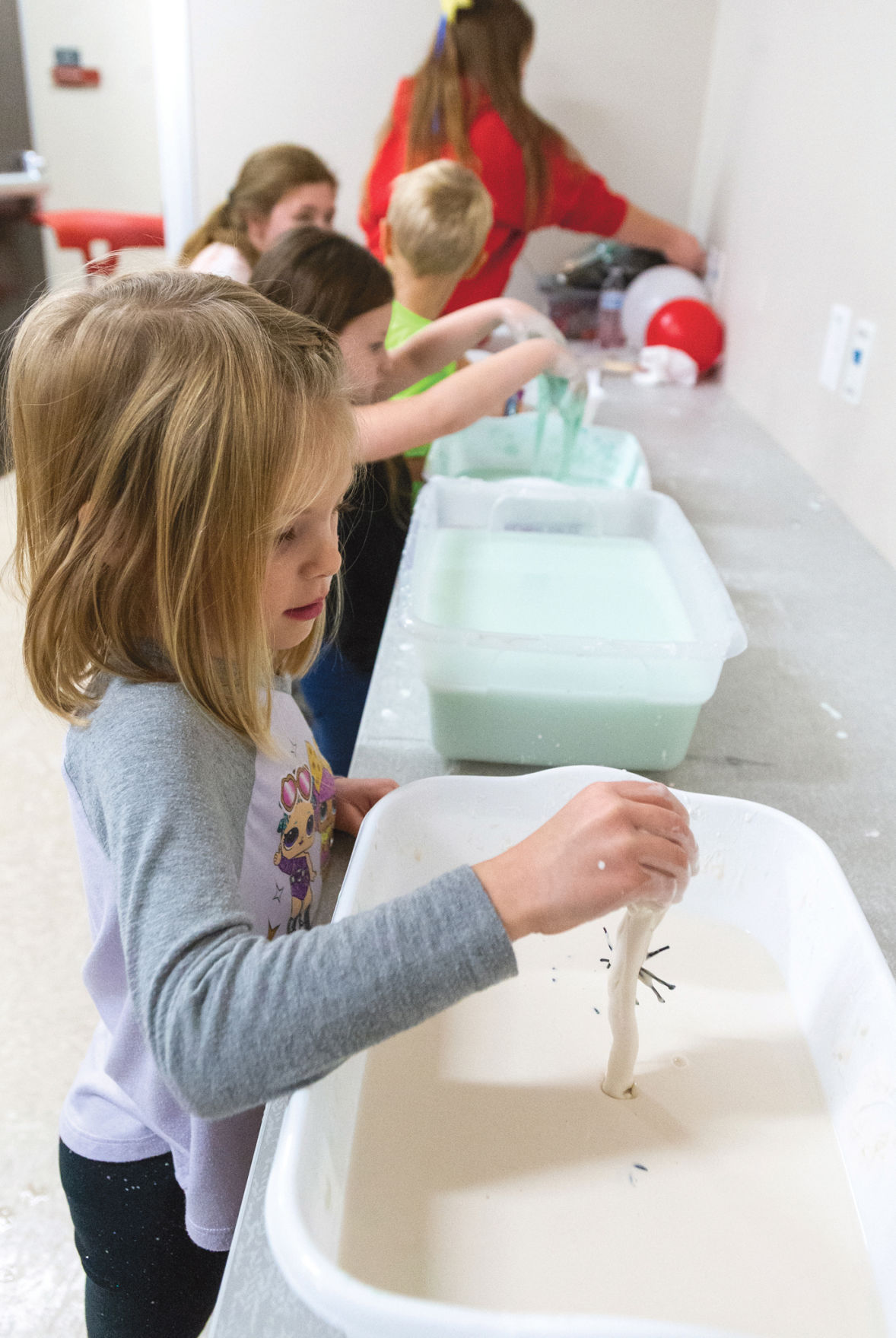 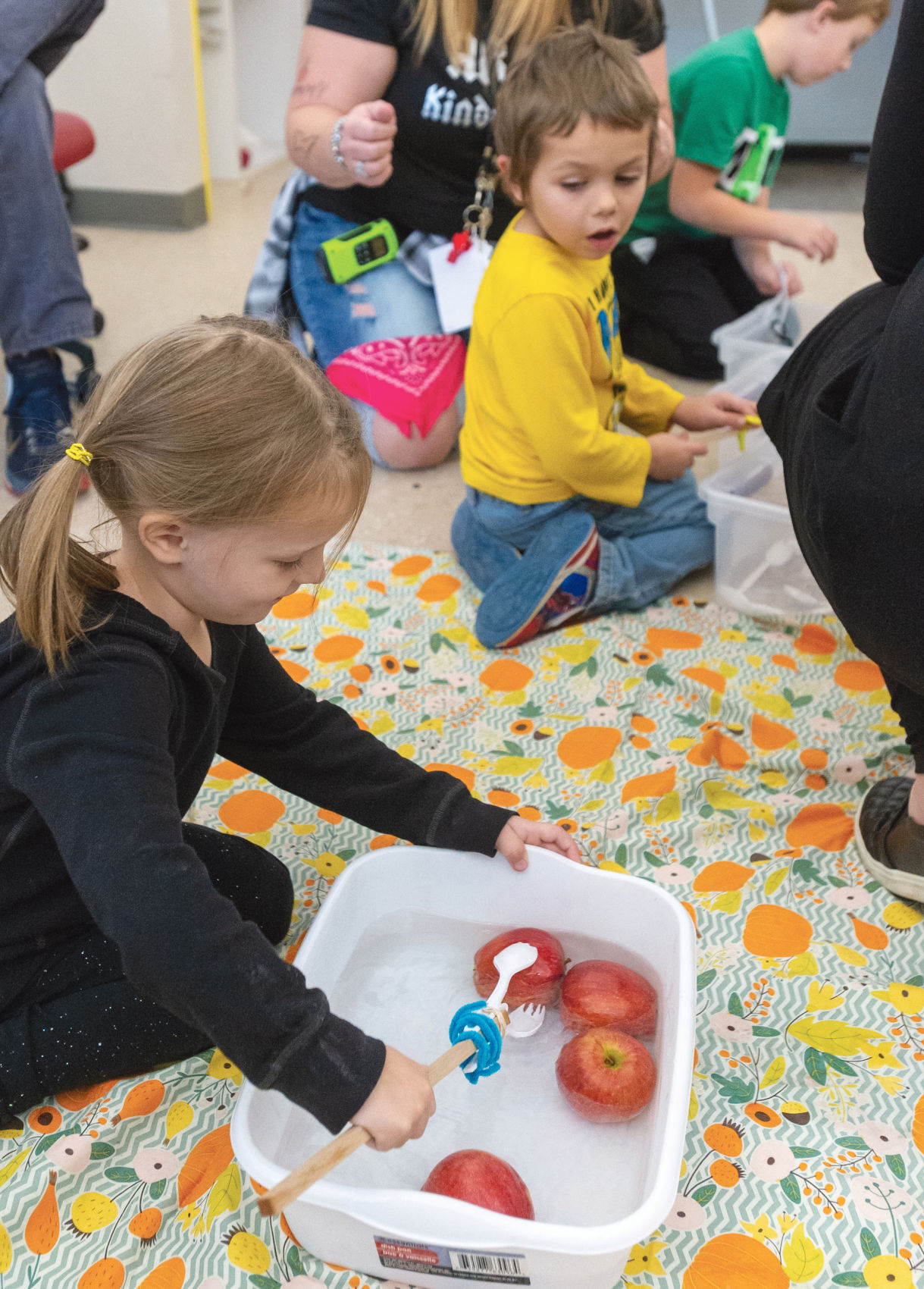 Merritt School kindergarten students try to pick up apples with a tool they created themselves as an engineering project during Thursday's Halloween STEM Fair. 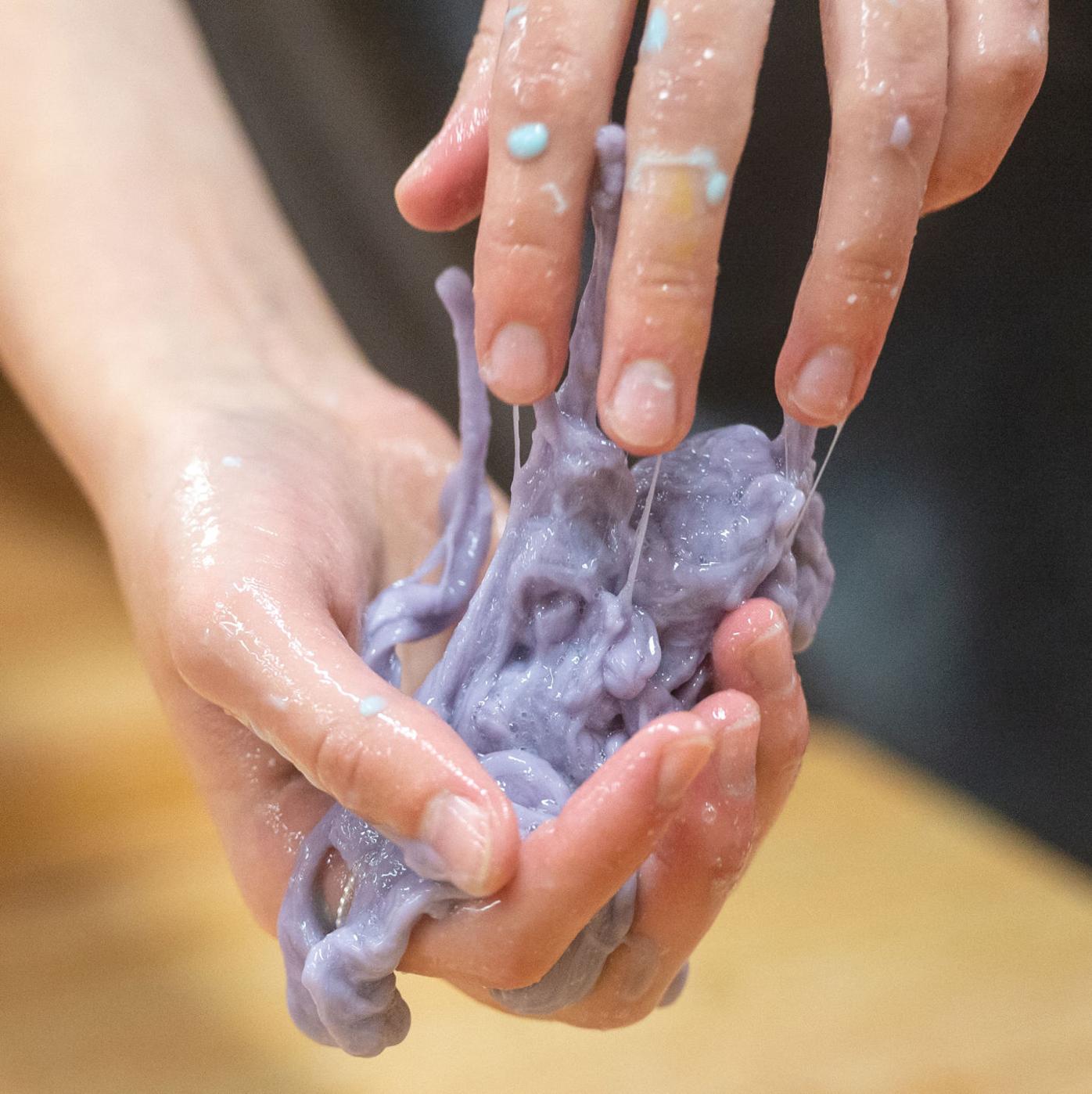 Merritt School kindergarten students watch as the baking soda and vinager chemical reaction they created blows up a balloon Thursday.

Merritt School students learn about science in a fun way Thursday during the school's Halloween STEM Fair in Mountain Iron.

Merritt School kindergarten students try to pick up apples with a tool they created themselves as an engineering project during Thursday's Halloween STEM Fair.

MOUNTAIN IRON — Halloween was extra spooky at Mountain Iron-Buhl, as students created bubbling witch’s brew, made ghosts leap up and dance, and set off ghost rockets.

But the spooky slime, eyeball races, and monster madness was about more than a fun way to celebrate the holiday.

The Halloween STEM Fair taught students in pre-kindergarten through sixth grade concepts such as elasticity, static electricity, and endothermic and exothermic reactions.

“The STEM fair is a great way for the elementary students to be introduced, or re-introduced, to some really important STEM topics in a fun and engaging way — like learning about chemical reactions and Newton’s laws of motion through a ghost rocket,” said Amy Fox, MI-B’s STEM integration specialist.

The ghost rocket experiment was one of the most popular of the day’s activities.

Sidney Mattila, an engineering student, showed a group of third graders Thursday afternoon how to make the exploding, milky-colored rockets by mixing cornstarch and water in a film canister, then adding a piece of an Alka Seltzer tablet and sealing the container.

“How does it work?” one of the children asked, as Sidney led the group outside to watch the rockets take off.

“The pressure builds inside of it and causes it to explode,” she said of the carbon dioxide gas produced from the reaction of the citric acid and sodium bicarbonate of the tablet, which causes the lid to shoot off. “The pressure inside needs to expand so it can pop.”

The STEM fair “is pretty fun,” Sidney said, while waiting for the next groups of students. “The kids are learning and still having fun for Halloween.”

Nearby, students worked on an engineering design project, seeing how high they could build a tower made from candy corn and toothpicks.

At another station, kids giggled as tissue paper ghosts, taped to a table, jumped up and danced from the static electricity they created charging balloons against their clothing and hair.

And students learned the math concept of estimation by guessing how many toy spiders were in a jar.

The engineering and pre-engineering students were challenged with finding “an exciting activity then researching the science, technology, engineering, and or math involved to see what the elementary students could learn from the project,” Fox said.

“The added bonus is that our high school students have the opportunity to develop the mini-lesson, teach the lesson, and learn more about the concept themselves.”

In the makerspace area, a station was set up for creating witch’s brew — a bubbly potion created by mixing water, baking soda and vinegar in a container — in this case, mini cauldrons. An engineering student explained how the baking soda is the “base” and vinegar is the “acid” which causes the chemical reaction that produces carbon dioxide.

The Applied Learning Institute (ALI) supports the EPICS curriculum in engineering at several area high schools and colleges, she said.

“Both high school and elementary students enjoyed the experience so much, we hosted another STEM fair last winter,” with a holiday theme. “And we are back at it again this year,” Fox added.

Karen Monsrud, a paraprofessional at Merritt Elementary, said the STEM fairs encourage children “to use their imagination” while learning STEM concepts.

“It’s fun to see the older kids working with the younger kids,” Monsrud said, adding that “on Halloween, they don’t have to sit in the classroom, but they are still learning.”

A table in the makerspace wing was covered with pipe cleaners, googly eyes, paper, fabric, ribbon, popsicle sticks and other materials for students to design “the next monster for the ‘Monsters, Inc.’ movie,” Fox said.

Fifth graders Carlie Henson, Magan Carlson and Arrianna Jenner smiled as they worked on their creations.

“It was enlightening … a learning process,” Carlie said of the STEM fair.

“It’s cool. We get to build stuff,” Magan said.

“This whole project wouldn’t be possible without the new high school building,” Fox said. The makerspace, makerlab, and design studio are all filled to the max with activity stations. … I’m so grateful to the community for providing a space for us to do these kinds of projects.”

Additionally, Fox said, “it’s exciting for me to watch as (students) make connections between what they’ve been studying in school and what’s happening in the activity. We have a lot of conversations about how STEM concepts are at work in everything.”

Even when comes to, well, witch’s brew and ghost rockets.