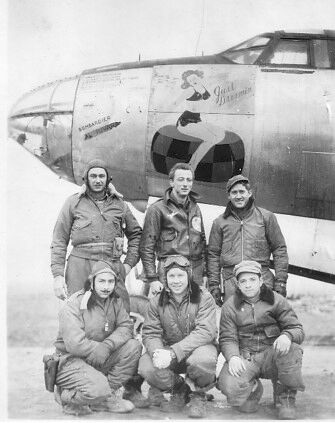 TSgt. Elmer Salvog, back row far right, is pictured with his flight crew in England during World War II. 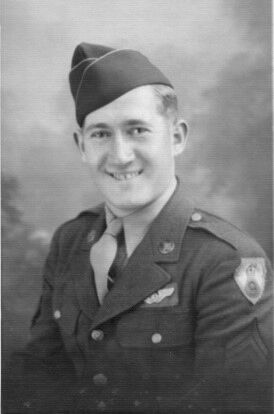 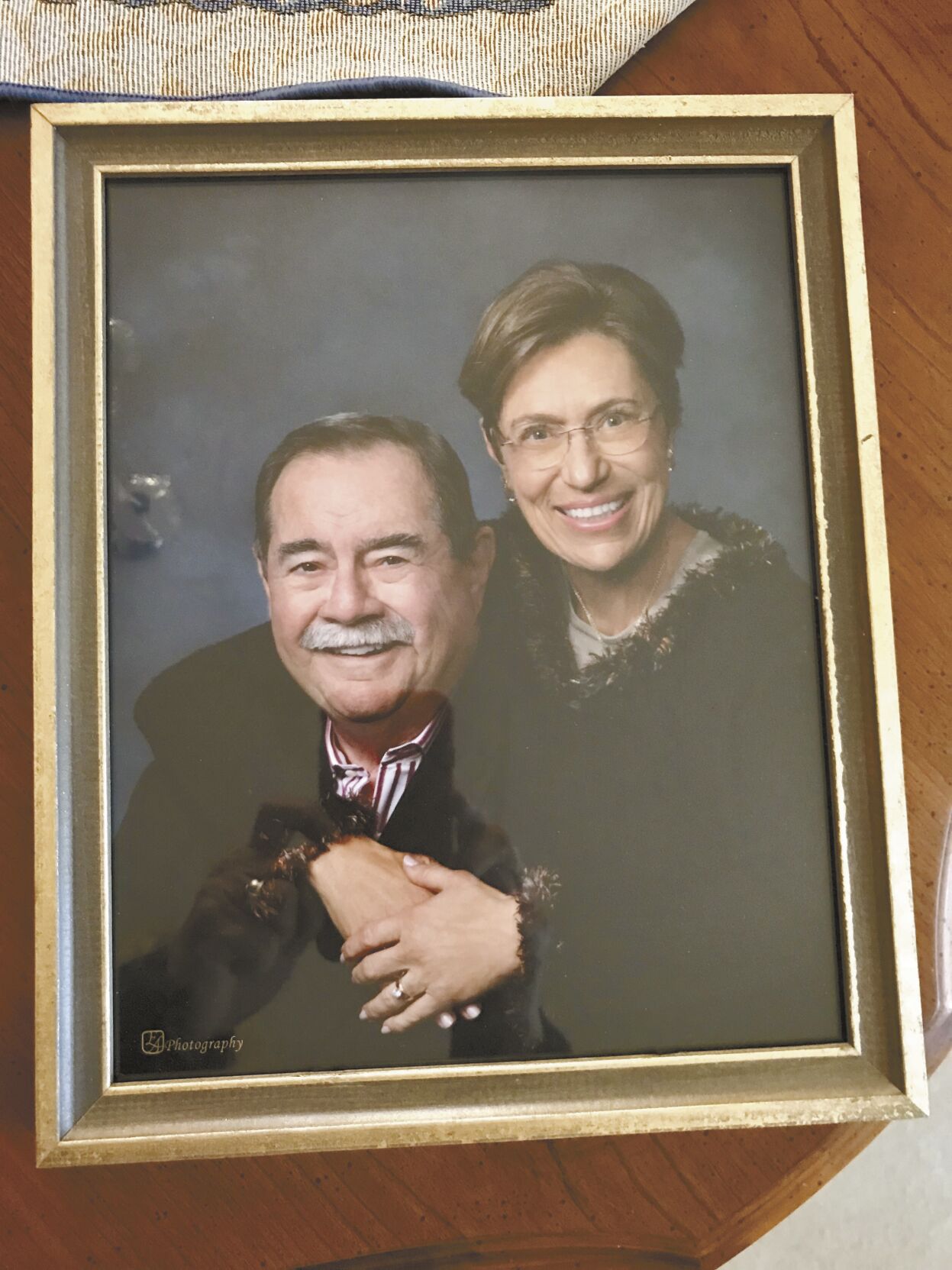 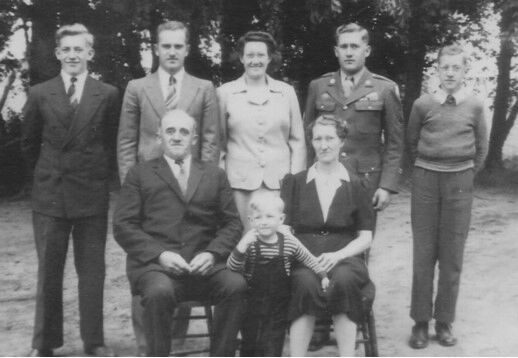 The Salvogs of Vining gathered for a family photo in the spring of 1945. Pictured left to right in the back row are: Ernest, Harold, Irene, Elmer (in uniform) and Ralph. In front are Emil and Alma Salvog with Emil, Jr. Of the siblings, only Ernest remains today and resides near Miltona. Harold Salvog’s widow, Doreen (Cordes) Salvog lives in Henning.

TSgt. Elmer Salvog, back row far right, is pictured with his flight crew in England during World War II.

The Salvogs of Vining gathered for a family photo in the spring of 1945. Pictured left to right in the back row are: Ernest, Harold, Irene, Elmer (in uniform) and Ralph. In front are Emil and Alma Salvog with Emil, Jr. Of the siblings, only Ernest remains today and resides near Miltona. Harold Salvog’s widow, Doreen (Cordes) Salvog lives in Henning.

As a kid growing up in Hibbing in the 1960s, Bruce Salvog never heard his father, Elmer Salvog, talk about his military service during World War II.

That was not uncommon for veterans who did not relish reliving unpleasant memories.

The young Salvog could not relate to war and what his father had experienced in the 1940s. “When I was a kid he never talked about the war,” Bruce said. “He [Elmer] made his sacrifice and that was it.”

Salvog’s understanding of war changed radically and suddenly 20 years ago on Tuesday, Sept. 11, 2001. On that day he nearly met his death in New York City as two hijacked airplanes were crashed into the two towers of the World Trade Center, killing 2,996 souls and injuring more than 25,000. Salvog came within minutes of perishing in the terrorist attack.

Bruce Salvog is now 73. He has embraced the fact that like his father in World War II his life will be remembered in part for its intersection with one of the most memorable and tragic days in American history.

The 9/11 attacks on the World Trade Center and the Pentagon in Washington, D.C., rank with two other dark days in U.S. history: the Japanese attack on Pearl Harbor in Hawaii on Dec. 7, 1941, and the assassination of President of John F Kennedy on Nov. 22, 1963, in Dallas, Texas.

The Salvog name is well known in Hibbing and in Henning and Vining, Minnesota — two towns in Otter Tail County.

Elmer Salvog was one of six children born to Emil and Alma Salvog on a family farm in Folden Township south of Vining. Elmer and three brothers — Harold, Earnest and Ralph — were all trailblazers on early athletic teams at Henning High School. Elmer was a star on Henning’s first varsity football team in the fall of 1939. He is a 1941 graduate of Henning High School and was only 20 when he flew his first bombing mission against Nazi Germany in late 1943.

Bruce Salvog’s date with destiny on Tuesday, Sept. 11, 2001, is tied to his life-long career in the financial industry. He graduated from Hibbing High School in 1966, where he was a solid student and athlete playing varsity football, basketball and baseball. His ties to Henning and sports history go deeper than being the son of a proud Henning graduate.

In the winter of 1966, it was his 13 points that lifted Hibbing to a thrilling 60-58 win over Henning, the only loss of the regular season for the Hornets who went on to make a second consecutive trip to the state basketball tournament. Elmer Salvog, after teaching and counseling jobs in Chatfield and Aitkin, had been in Hibbing since 1958 where he was head football coach and head of the guidance department.

On Monday, Sept. 10, 2001, Salvog flew from Minneapolis to New York City where he was to share his expertise in institutional investment management with financial writers at the World Trade Center. He checked into his room on the 20th floor of the Marriott World Trade Center South Tower (the Marriott occupied 24 stories of the 110-story skyscraper) and spent the night preparing for his talk which was to take place at a breakfast meeting at Windows on the World at the top of the North Tower the next day.

Salvog left his hotel room the morning of Sept. 11, and was descending in the elevator when the first plane slammed into the North Tower at 8:45 a.m. He was no more than five minutes shy of crossing the plaza between the two towers and taking the two elevators to the top of the North Tower. “Had I left my room a few minutes earlier, I might not be talking to you today,” Salvog said from his current home in Bend, Oregon. “Thank God I never made it [to the North Tower].”

As the elevator descended from the 20th floor, Salvog said the crash of the first jetliner shook the elevator, trapping Salvog inside. When the elevator’s automatic stabilizers kicked in, the doors finally opened in the South Tower lobby. In a 2015 memoir for the 9/11 Memorial Museum that opened in 2014, Salvog described the scene:

“We were not allowed to leave the lobby, with the chaos, falling debris between the towers, and traffic mayhem; some other guests reported that they were told to return to their rooms, but being claustrophobic, I escaped at the first opportunity when we were allowed to exit the rear door near the bar.

“I made it about a block and a half away, when the second plane screamed right over my head into the South Tower. I will never forget that blue and white United plane and the massive fireball it created just behind me. Several of us ran from there to Battery Park, where I tried to reach my wife back in Minnesota. When I finally got through to her to tell I had escaped the Towers, but we were apparently at war, she had no idea yet what had happened. She turned on the TV just in time to see the South Tower fall, and of course our conversation ended immediately since the communication dishes were atop the towers. It would be six hours before she would learn my fate.

“After watching dozens jump and the Towers fall, I was trapped with thousands of others along the Hudson River railing in Battery Park by acrid black smoke for nearly three hours. What resonates even today are innumerable acts of courage and kindness I witnessed: From the firefighters running toward the Towers we were escaping, to strangers assisting the injured and infirm, to the Jewish security guys who came down from the Diamond District to pass out water and masks to those with respiratory difficulty, and to all those who spontaneously formed a human chain to lower people over the railing to the pitching deck of a ferry boat that would take us across the river to safety. The spirit of selflessness was amazing.”

Salvog made his way by boat to safety in New Jersey. The evacuation across the Hudson River still constitutes the largest boatlift of people in U.S. history, he believes.

The suit he was wearing, a garment bag and briefcase were covered in a layer of dust. It wouldn’t be until Friday, Sept. 14, 2001, that he would be able to catch a flight back to Minneapolis from Philadelphia. By good fortune, his sister, Pamela Murray of San Diego, managed to make it to the East Coast where she was dropping off her son at Princeton. Thanks to his sister’s rental car, they were able to drive from New Jersey to Philadelphia where Salvog was able to get on a plane home.

It was a life-changing several days for Salvog.

The events of 9/11, coupled with a successful pre-scheduled cancer surgery at the Mayo Clinic in October of 2001, were clear messages, he said, that it was time for a change. Six months later he retired from Piper and resettled on the West Coast where he had spent many years.

Thinking back on 20 years ago, Salvog is still struck by the irony of the events that day. At Piper, one of his major investment clients was the pension fund of the firefighters of the Fire Department of New York. “They were running into the building when I was running out,” he said. Had his day on Sept. 11 gone as planned, he was to meet later in the day with representatives of the fire department to review pension matters.

In the 20 years since 9/11, Salvog says he has been committed to living a life of spiritual growth. His life, he says, is filled with service to others, caring for aging parents, supporting widowed friends, helping a charity and sharing the joys of life with his wife of nearly 40 years. “What I didn’t know on 9/11, but realize now, is that I was spared for a reason.”

In the years that have followed 9/11, Salvog says he can now better understand how his father had dealt with his experiences in a world war. Elmer Salvog was in his 80s when he started to reconnect with the few remaining men that he served with. Bruce Salvog was 53 when he faced war head-on; Elmer Salvog was only 20 and fresh off the farm near Vining.

According to family history records, after high school graduation Elmer moved to California when he was 17 to work at Consolidated Aircraft in San Diego. In February of 1943, the 19-year-old enlisted in the Army and was assigned to the Army Air Force. By the fall of 1943 he joined the Ninth Air Force 397 Bombardment Group, 396th squadron, based in Gosfield and Rivenhall, England. His unit was known as the “Bridge Busters” for their work over France.

Like many from what has been called the greatest generation, Salvog returned to civilian life, enrolled at the University of Minnesota where he earned a teaching degree and started a family with his wife Evelyn, 94, who resides in California today. He completed a bachelor’s degree in education in 1948 and later went back to the University to earn his master’s. He retired from Hibbing in 1986, after working in public education for 37 years. The Salvogs were parents to Bruce, Pamela Murray and Paula Brown. Elmer Salvog was 90 when he died on April 26, 2014, in California where the couple had retired.

In the years following the terrorist attacks, the father and son would talk about shared experiences. Bruce Salvog believes his father’s time in combat and coming close to death in the air helped Elmer understand what Bruce experienced on that dark day in New York City.

“He [Elmer] could relate in the sense that he had been close to the edge a few times,” Bruce said. “They had been preparing for it [war]. That’s the contrast that we found. At least [Elmer] knew that we were at war.”

Bruce Salvog as a senior in 1965 is pictured with his father and football coach Elmer Salvog.